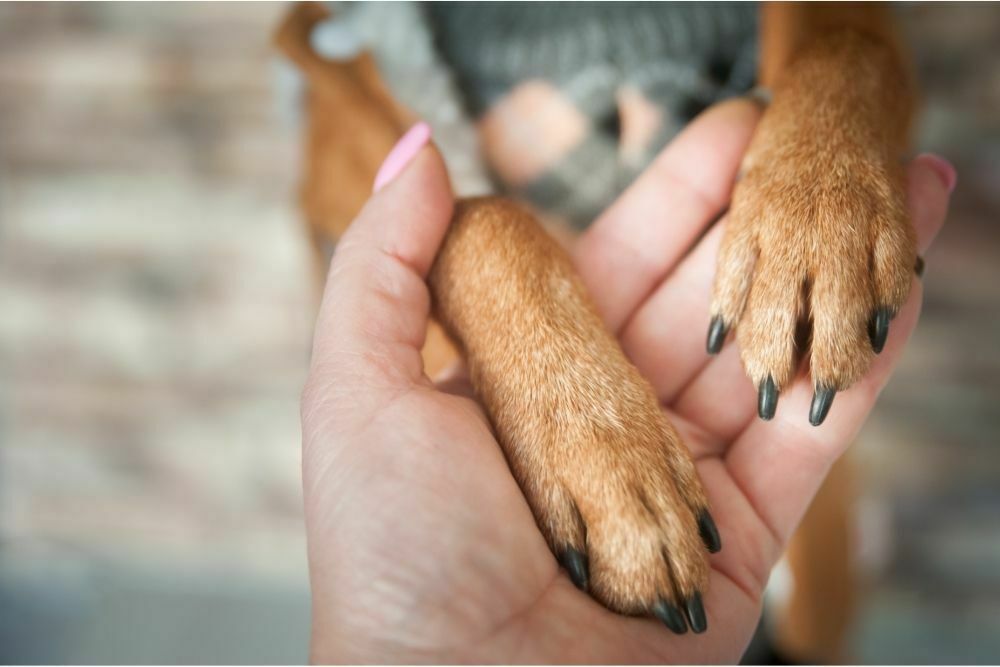 The dew claws on your dog are found typically on the front paws of the animal. These claws are noticeably different from the other claws as they are found on the upper, inner part of the paw.

Dew claws are sort of like a dog equivalent to the thumb, or a big toe. They do not really touch or come into contact with the ground, and will usually just be used as an extra grip, or to help with traction when running.

Whilst the dew claw may look like an extra toenail, and can seem as if it does not have a purpose, they do. If you feel around the dew claw, you will notice the tendons, and you can feel how connected the claw is to your dog’s paw. This shows that a dew claw serves a purpose, and is not just a useless appendage that can be removed.

The dew claws are essential for some dog breeds as they help them gain traction and grip when running across the ground. This can also help dogs when turning on slippery surfaces or uneven ground, and will also work to stabilize the foot and wrist joints of the dog when moving.

In addition, some dogs need to use the dew claws to help them hold objects such as bones and toys in order to chew them, or to help them get out of water, walk on icy terrains or climb up trees and obstructions. This is why many breeds still have dew claws, and they will need them in order to survive.

However, some owners have taken up the practice of removing dew claws from their dogs, as some breeders see them as unsightly or useless. However, this can lead to arthritis, or loss of mobility in some dogs.

Are all dogs born with dew claws?

Yes, more often than not, all dogs are born with dew claws on the front paws, but some breeds may have a set of dew claws on their hind legs too. These types of claws do not bother dogs in any way, and they are natural to them.

Some dogs are bred to not have dew claws, and so there may be a small amount of protruding skin without the actual claw remaining. This is often removed surgically.

Why are they called dew claws?

Dew claws got their name because they are positioned higher off the ground, and do not actually touch the floor. It is for this reason that they would brush and skim dew off the grass in the morning because of their heightened position.

Do wolves have dew claws?

Yes, wolves do have dew claws, which are fully attached to the paw, and only found on the front legs. However, wolves have much larger paws than dogs, with the middle toe being much longer than normal dog paws, and webbing between the toes

The removal of dew claws is a highly debated topic among dog owners. Some regard the practise as cruel and barbaric, whereas others do it for cosmetic reasons, or to avoid health issues and injuries.

This is because it can be very painful, and will need to be done under general anesthetic. Whereas dogs can be neutered and spayed, this is often done for a specific reason, or to prevent illness in future.

Dew claws are harmless and painless, and so there is no reason to remove them other than it can be considered more ‘aesthetically pleasing’ for owners, much like clipping the ears or tail of a dog.

If your dog has an ingrown dew claw, or is suffering an injury due to a dew claw, then it can be safer and more feasible for a dog to have it removed. However, these cases are few and far between.

Can dew claws grow back after removal?

For the most part, dew claws cannot grow back after they have been removed, if the surgical procedure is done properly. This is because the whole root of the nail, or the claw must be properly removed and cut away, or the claw will eventually grow back.

Whilst they should not grow back after a surgical procedure to remove them, it is not unheard of for dew claws to come back after removal.

How late is too late to remove dew claws?

Most veterinarians will suggest that dew claws are removed at around four or five days old. If the dew claws are not removed at this point, then it is better to wait a few months until the dog is old enough to be spayed or neutered, and the claws can be removed whilst the dog is under anesthesia.

Any later than this point, and your veterinarian may advise not to remove the dew claws unless they are causing an issue. This is largely due to the fact that it can be a very painful procedure, and is mainly unnecessary for many dogs.

How much does it cost to remove dew claws?

If a puppy is getting its dew claws removed shortly after birth, then it usually will cost about $30 to $40 per puppy. However, if the dew claws are being removed later on in life, then the dog will need to go under anesthesia, which will cost a lot more.

With older dogs, the removal of the dew claws is far more difficult, and expensive, with costs of up to $800 or more.