Bearded Dragons are definitely a cool kind of pet to own, but a surprising amount of owners know so little about this reptile when they decide to pick one up as a pet.

This can be a serious problem if you don’t understand or know much about your pet, then how can you look after them properly? 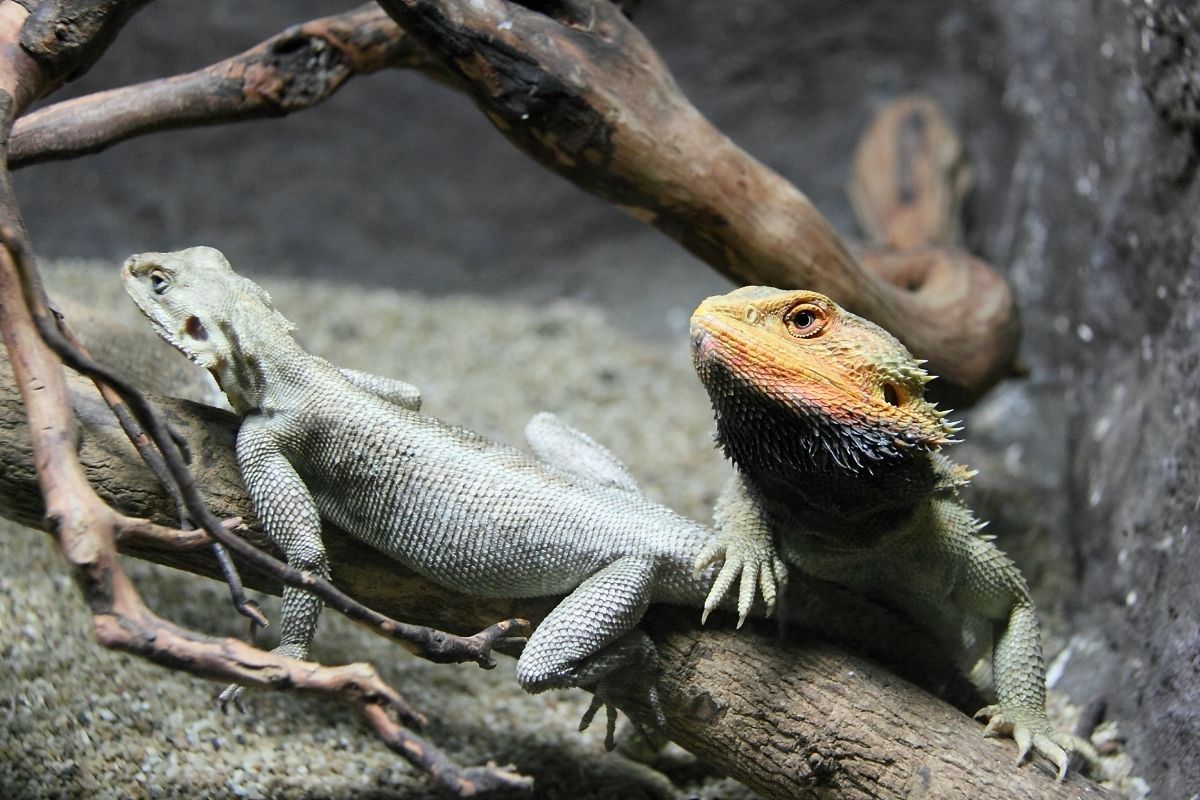 The same rule applies for Bearded Dragons. You need to understand everything you can about this creature before you decide to own one as a pet including everything about their diet, their habitat and their sleeping habits.

So – are Bearded Dragons nocturnal? Do you need to turn the lights off when they go to sleep? And what about their heat lamp?

Here, we are going to answer every question about Bearded Dragons and their sleeping habits including if they

sleep during the day or night, and how you can accommodate your home to make sure they get the best kind of rest possible for a happy reptile.

So, if you are thinking of owning a Bearded Dragon, this is the place for you.
Let’s dive in!

Do Bearded Dragons Sleep During The Day Or Night?

Bearded Dragons are not nocturnal animals. Instead, they are diurnal – which means that, just like us humans, they prefer to be up and active during the day.

When things get dark and late in the evening, a Bearded Dragon in the wild will seek out a nice cave to sleep in or cover themselves in sand for camouflage and protection against predators.

They will sleep through the night and awaken in the morning, ready for a brand-new day!

This means that your pet Bearded Dragon will follow the same routine as they do in the wild. They will sleep during the night and be awake and active during the day.

This makes complete sense because we know that Bearded Dragons like to bask in the sunlight and warm themselves up.

They do this so their body is the perfect temperature for them to go hunting for food. Although your pet Bearded

Dragon won’t be hunting for their food, they still will want to bask in a strong heat lamp to regulate their body temperature.

So, this must mean that Bearded Dragons sleep during the night – which is true! They sleep for around 11 hours every night and sometimes even sleep for as long as 14 hours during the winter!

However, this does not mean that Bearded Dragons are lazy. They are in fact very active creatures that hunt and fight for most of the day when they are awake.

Even in captivity, your pet Bearded Dragon should be active during their daytime hours and be moving around their habitat.

If they aren’t and they appear to be sleeping for most of the day as well – then that’s a sign of a bigger issue that we will cover further down.

How To Simulate Day And Night For Your Bearded Dragon

So, Bearded Dragons are awake during the day and sleep during the night.

However, in a terrarium or captive habitat, this can be difficult to simulate. You cannot just leave the lights on twenty-four seven – this will only confuse your Bearded Dragon and stress them out.

Switching your lights on and off manually is not a great idea either. What happens if you are not there to switch the lights off on time?

This will lead them to sleep during the day and be awake during the night, completely messing up their body clock.

To combat this, you should use a timer for your light switches. This means they will turn themselves on and off automatically for your Bearded Dragon, keeping it to a strict schedule that will make for one happy pet.

You should also try and change the timer to replicate longer summer days and shorter winter days. This will allow your Bearded Dragon to follow its body clock and start brumation.

Brumation is when reptiles (including your Bearded Dragon) start to be sluggish and sleep for longer periods of time during the winter.

It is similar to hibernation but not exactly, meaning it is like a diet-version of hibernation that reptiles go through every year.

Not allowing your Bearded Dragon to brumate can lead to other health problems, so it’s important to make sure that your lights not only mimic the day and night cycle, but the cycle of the seasons as well.

This will make the ideal habitat for your pet Bearded Dragon.

What Lights Do I Turn On And Off?

One of the many misconceptions of owning a Bearded Dragon is that you have to leave the heat lamp and lights on at all times so your Bearded Dragon is constantly kept at the right temperature.However, this is not true.

Your pet Bearded Dragon’s habitat should mimic its environment in the wild and the same goes for temperature drops during the night.

This means that you should not leave your Bearded Dragon’s heat or basking bulb on all night.

This makes the environment too hot for your Bearded Dragon and causes them to become uncomfortable, potentially leading to further health problems. 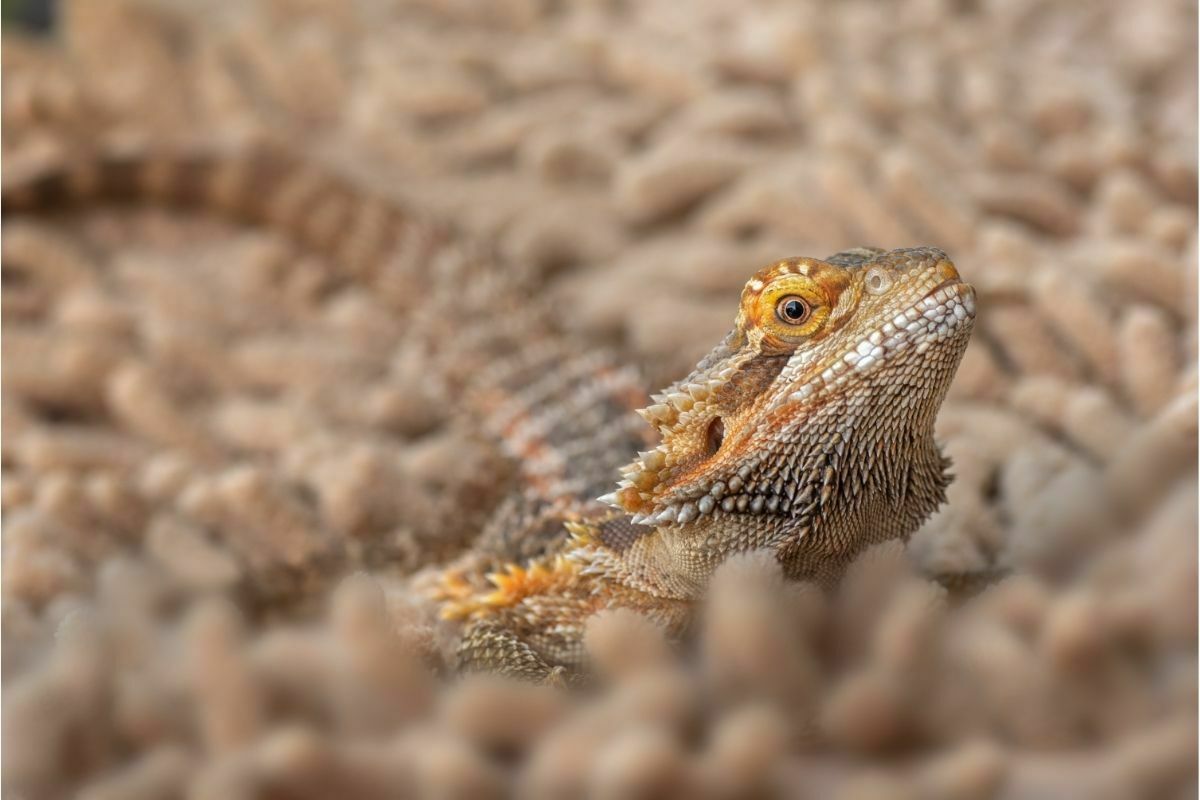 In the morning, both lights will switch back on and mimic the rising of the sun. This will heat the habitat backup and keep your Bearded Dragon on schedule.

What If My Bearded Dragon Is Sleeping In The Day?

This is not normal behavior for Bearded Dragons. They do spend some time basking under their heat lamp, but they should not be afraid of moving away from it during the day.

They are active reptiles and should be happy moving around their habitat during the day, so if they are fixed to one position, then this is a sign that something is wrong.

Check the temperature of the habitat and fix any lighting issues as soon as possible.

If the temperature of the habitat is fine, then this could be a diet issue. Bearded Dragons need a certain amount of energy from a diet made up mainly of meat,

so feeding your Bearded Dragon the inappropriate foods will leave them underfed and without the energy it needs to move around.

If feeding your Bearded Dragon some extra crickets is not working, then a trip to the vet is in order.

So, Bearded Dragons are not nocturnal. They are instead diurnal just like us humans – they sleep during the night and are active during the day.

This means that you have to set your Bearded Dragon’s tank lights to mimic the day and night cycle automatically to avoid confusing your pet. You should also adjust them every September and February to mimic the seasons too.

This will allow your Bearded Dragon to brumate and stay happy and healthy.

If your Bearded Dragon is sleeping during its daylight hours, then this is a sign something is wrong.

It could be a lighting or diet issue, but either way – you need to investigate and solve the problem as soon as possible.