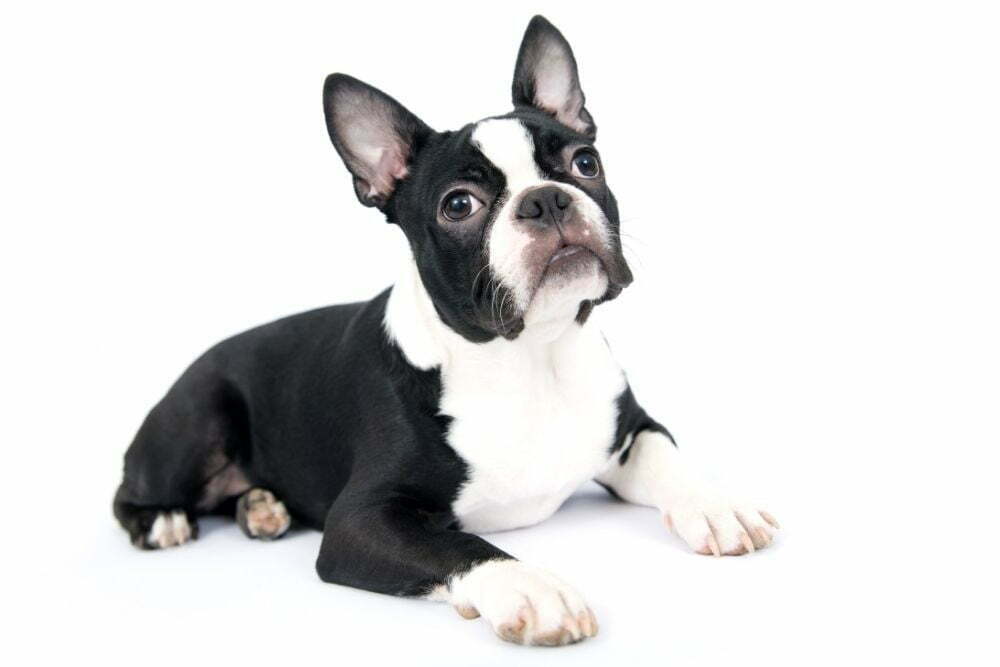 Boston Terriers are great house dogs due to their smaller size and affable personality. This friendly playfulness makes the Boston Terrier a good family dog, but they’re also a loyal companion for single person households. Boston Terriers aren’t particularly aggressive, and will generally be friendly with other dogs, animals, and people.

They also don’t need much in the way of grooming. Their coats consist of short and sleek hair, which is easy to care for. Shedding is minimal, they only require the occasional bath and a rub with a brush.

Their friendliness make them ideal for families, and a Boston Terrier will love to play. Boston Terriers are relatively easy to care for, and incredibly easy to love. This makes them a good house dog.

Is a Boston Terrier a good first dog?

A Boston Terrier does make a good first dog, due to their welcoming personality. Boston Terriers are sociable and friendly, rarely aggressive, and have a low maintenance coat. A first time owner should find a Boston Terrier relatively easy to train.

Boston Terriers are sensitive dogs, which makes them sweet around even small children. With a little patience, a first time dog owner can train a Boston Terrier.

A Boston Terrier doesn’t shed much, due to their sleek coat. Their low maintenance grooming is ideal for first time dog owners who might be surprised by how much brushing other breeds need.

Playful and energetic, the small Boston Terrier doesn’t need the same amount of exercise as other breeds. They’ll be happy with a walk a day, and love chasing after a Frisbee or a ball.

The major problem with Boston Terriers is the health problems of the breed. The short snouts led to breathing problems, and their large eyes are prone to infection. Always look for a reputable breeder.

Do Boston Terriers need another dog?

Boston Terriers get on well with other dogs, but they don’t need another dog to be happy. These dogs were bred for companionship, so they get attached to their owners and enjoy spending time with them.

Boston Terriers should be introduced to other dogs from a young age. They need to be socialized, otherwise they can be wary and even aggressive. By introducing them young to a range of breeds, a Boston Terriers natural friendliness will come through.

A well socialized Boston Terrier will be excited to see another dog, and want to play. Although they might initially bark at a dog in the distance, this will rarely turn into aggression.

As well as dogs, Boston Terriers may also get on well with cats. Especially if they are introduced at a young age.

Boston Terriers love the companionship of their families, so they can get very attached. Rather than needing another dog, they’ll be happy getting attention from their human owners.

Are Boston Terriers protective of their owners?

Boston Terriers are loyal companions, so they can become protective of their owners. They should be socialized from a young age to avoid any aggression.

One of the reasons we love Boston Terriers is how much they love us. A Boston Terrier is eager to become part of the family, and will enjoy bonding time with its owners.

They want to play and receive affection, and they’re incredibly sensitive. Boston Terriers have been bred for their companionship, which means they can form unique bonds.

When new people come to your house, a Boston Terrier may be initially wary, or even aggressive. This should be corrected. The best way to avoid this is to socialize your dog from a young age.

Are Boston Terriers easy to train?

Although it might take them a few sessions to understand what you’re asking, once they’ve started to pick it up, training a Boston Terrier can be relatively simple. Use food and positive reinforcement, and this eager to please breed will soon be behaving.
Because Boston Terriers are so sensitive, they should only be trained with positive methods. Even mild corrections can be upsetting.

The hardest part of training a Boston Terrier is their playful nature. It’s an easily distracted breed. Even if they’ve learned a command at home, that can go out the window when they’re surrounded by all the exciting things outdoors. Start training in a low distraction environment, and gradually increase distractions.

Boston Terriers can be stubborn, but they generally prefer to please their owner. Start training them young, and let them know how proud you are that they’re learning. 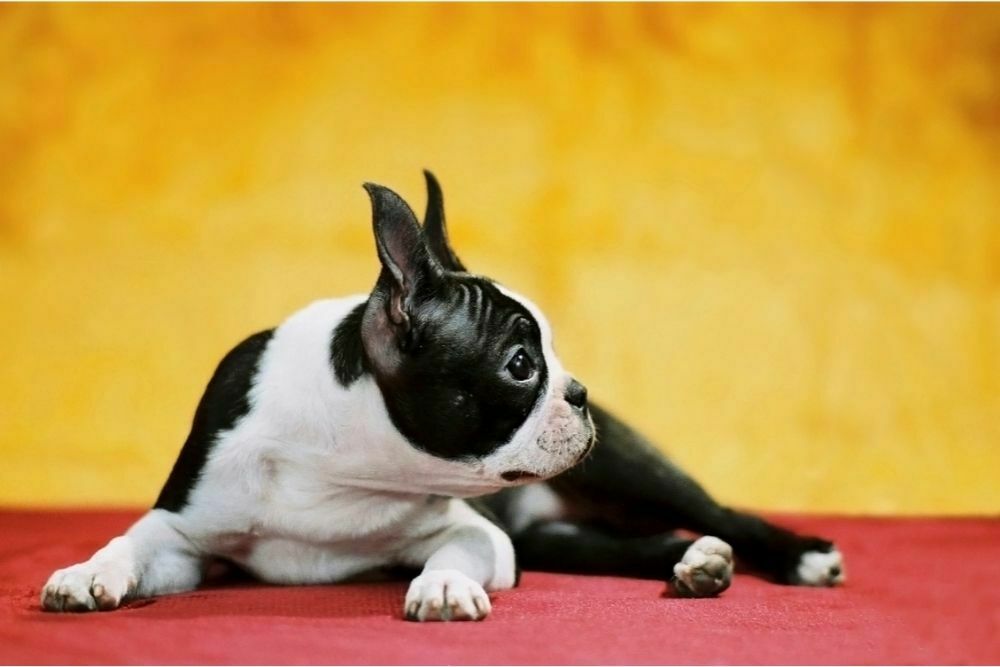 Do Boston Terriers bark a lot?

Boston Terriers don’t bark a lot, but they do have their moments. They’re friendly with strangers and other animals, so wouldn’t make good guard dogs! A Boston Terrier is most likely to bark when it’s watching the house.

If a Boston Terrier is barking, it probably wants attention. It might be that it wants to get outside, or just that it thinks it’s playtime. However, Boston Terriers don’t usually bark to use up energy, unlike other terriers. This is what makes them a quieter breed.

Boston Terriers do like to keep you informed of the comings and goings. If a car pulls up, or a Boston Terrier sees someone approaching the house, they’ll bark to let you know. If there’s a large dog in the distance, a Boston Terrier may bark at them. It’s unlikely to turn aggressive.

While barking is minimal, Boston Terriers do make some other noises. Snorts, snores, wheezes, and grunts, are all common sounds to expect.

Do Boston Terriers get cold easily?

Boston Terriers have short hair, which makes them more susceptible to the cold. For a winter walk, wrap your dog up in a coat to protect them from adverse conditions.

Boston Terriers need less exercise than some other dogs, so on very cold days keep the walks shorter. They do still need exercise though, so be sure to take them out. Supplement the walks by playing with them indoors. Boston Terriers love games, so this will keep them healthy.

You also need to be careful with your Boston Terrier in warm weather. Due to their short snouts, the breed struggles to regulate their body temperature. The small airways make it difficult for them to pant out excess heat. Keep them cooler, and give them lots of water.

Plan your Boston Terriers walks around the day. In winter, head out at midday when the sun will be highest. In summer, stick to the cooler mornings and evenings.

Boston Terriers can swim, and many enjoy it if you take steps to introduce them to water. Like most dogs, Boston Terriers are natural swimmers. However, some may be a bit adverse to the water at first.

Start by getting them comfortable in the water. Let your Boston Terrier dip their feet in first to get used to the feel of being wet. Stick to the shallows, so the dog can explore on their own.

Once they seem happy, you can use playtime to convince them to wade in a little deeper. Throw a stick or ball slightly further each time, to encourage your Boston Terrier to wade in after it. Eventually, the dog should begin to gain confidence and will start happy paddling about.

Boston Terriers aren’t the strongest swimmers, but most of them should be fairly competent. Try introducing them to the water young. Only let them swim for short bursts, as they can tire easily. Fifteen minutes should be enough to keep them happy.

Do Boston Terriers need a lot of exercise?

Boston Terriers need around 30 to 60 minutes of exercise a day. They’re playful and energetic, but their smaller frames don’t need the same long walks of bigger breeds. Boston Terriers may struggle with their breathing, so it’s important to pay close attention to when they might be getting worn out.

Boston Terriers will enjoy walking and running. A walk of 30 to 60 minutes every day should be enough to keep your Boston Terrier happy – especially when you factor in playtime! Outside the house, Boston Terriers should be kept on a leash. They can move incredibly fast, and are curious and easily distracted.

A short walk and some games of fetch throughout the day are better than a long and vigorous walk.

Boston Terriers are intelligent dogs, so try and play some interactive games to keep them engaged. Fetch, hide-and-seek, and agility training are all good for the breed.