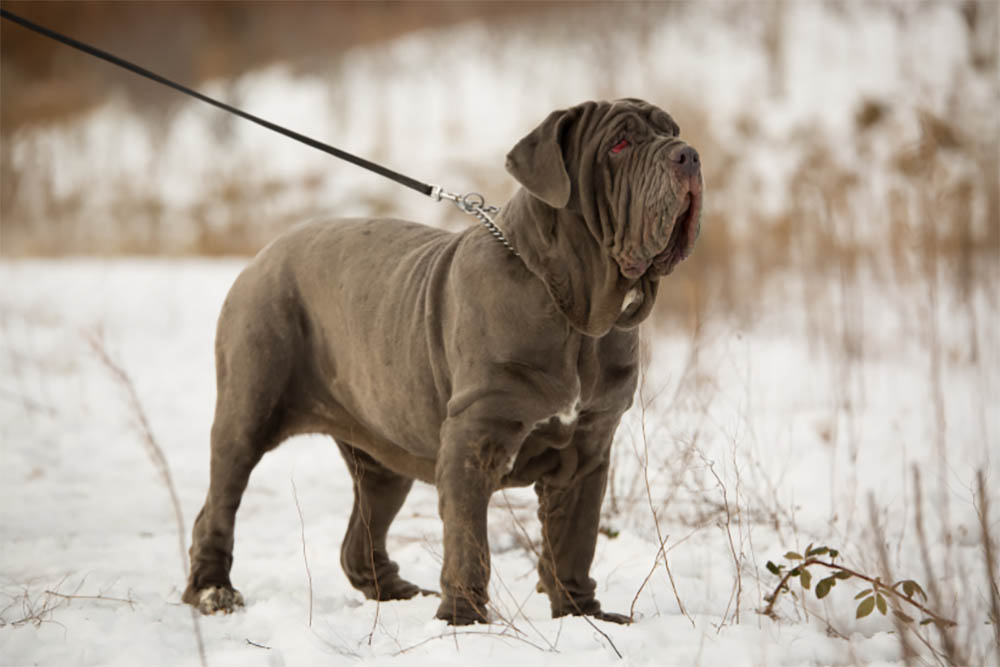 Neapolitan mastiffs are an incredibly old breed. They were used as military dogs, guard dogs, and fighting dogs by the ancient Romans.

All the above occupations required the Neapolitan mastiff to be fiercely loyal to its owners and aggressive in the face of intruders or threats.

The breed was resurrected in the 1930s and 40s where it continued to be bred as a guard dog and protector.

While studies are undecided about whether aggression is a breed characteristic or a behavior, Neapolitan mastiffs do display a marked unfriendliness to strangers, both human and dog.

This unfriendliness often presents as shyness or aloofness in the face of new people or dogs. However, in some cases, it can present as aggression.

This is why it is vital that Neapolitan mastiffs are properly socialized as puppies. This means experiencing other dogs and strangers in and out of the home in a variety of contexts.

With firm and consistent training, Neapolitan mastiffs make wonderful family pets. They are incredibly loving and loyal with their people.

Despite their imposing size and intimidating features, you’re more likely to find yourself covered in slobber than bites if you own a Neo.

Interestingly, like many other giant breed dogs, Neos are great with children. They become gentle giants around little ones, though they can become possessive of kids in the household.

The aggression that is often assigned to Neos comes from the fact that they’re not overly keen on strangers. However, as we mentioned, this can be mitigated with socialization and training.

We hesitate to label any breed as aggressive because aggression has as much to do with the owner as the dog.

These dogs are definitely not recommended for first time dog owners. Mostly because of their size and strength, but also because of their weariness around strangers. If you have experience with large breed dogs, a Neo could be your perfect pet!

How Much is a Neapolitan Mastiff Worth?

Neapolitan mastiffs are actually quite good value for money when you consider their size!

Purebred puppies tend to cost between $1000 and $2500. Although this seems expensive, it’s actually much cheaper than many other pure-bred dogs.

The Neo’s Tibetan cousin can cost up to $20,000 for a pedigree pup! That’s about ten times the amount of a Neo.

In Europe, Neapolitan mastiffs tend to cost around about £3500 or €4000. The most expensive of these dogs will be from champion bloodlines, meaning their parents have won shows on the continent.

The reason Neos are so much cheaper than breeds like Tibetan Mastiffs, Samoyed, Cavalier King Charles Spaniels, and American Bullies, is because they are a less popular breed.

Neos rank 102 out of 197 in the US breed popularity charts. They’ve been in and around that place for the better part of a decade. They did rise slightly to 99 in 2016.

Demand is one of the biggest deciding factors when it comes to puppy prices, closely followed by scarcity.

Breeds like the Löwchen, which was once the rarest dog in the world, are fairly difficult to come by, which makes breeders bump up the price. Your average Löwchen pup will cost around about $8000, which is phenomenal.

Equally, vogue breeds like the golden doodle tend to cost more because people are so desperate to own one! A golden doodle, despite being essentially a mutt, can cost you upwards of $5000!

One of the cheapest ways to get a Neapolitan mastiff is to adopt one from a rescue or shelter. These adorably droopy dogs do, unfortunately, end up dumped when they don’t stop growing or show signs of aggression.

How Big do Neapolitan Mastiffs get?

Neapolitan mastiffs are enormous dogs. Male dogs naturally tend to be slightly larger than the females.

A male Neapolitan mastiff stands between 26 and 30 inches tall on average, while the females tend to top out at 28 inches.

In terms of height, Neapolitan mastiffs are not the tallest. Lanky, long-legged breeds like the Irish wolfhound and the Scottish deer hound often beat the Neo by a few inches.

The English mastiff also tends to be slightly taller than its continental cousin, coming in at around 32 inches tall.

It’s the weight and bulk departments where the Neapolitan mastiff really shines. These dogs are absolute tanks.

According to the breed standards, the Neapolitan mastiff should be longer in the body than it is tall. Considering these dogs stand about 30 inches tall, that is a lot of dog!

The head is large and broad, but it looks even bigger thanks to the copious skin flaps. The loose skin is a defense mechanism that makes the Neapolitan mastiff such a fantastic guard dog.

Loose skin protects vital organs and weak spots like the neck from attacks from other dogs or humans. It also allows them to turn and bite if they are held by the neck.

The largest Neapolitan mastiff in the US was a dog called C. H. Sampson. He weighed in at a whopping 220 pounds! Crucially, he was not overweight, which gives you an idea of how large he was!

C. H. Sampson also became the first Neapolitan mastiff to win the American Kennel Club’s best in show over all other dogs that entered!

He became the stud dog of the Wild Child kennels and went on to breed lots of subsequent show winning Neos.

He remains the largest, healthy Neapolitan mastiff on record in the USA. It has been a decade since he won best in show, and he still has not been usurped.

Unfortunately, like all giant breeds, the Neapolitan mastiff has a shorter lifespan than smaller dogs. The average age for Neapolitan mastiffs is about 7 years, though they have been known to live up to ten years.