Cheesecake is something that I can’t stay away from – Paige

Is there a finer desert anywhere in the world than cheesecake? It combines all of the things that we love the most, cheese, sugar, fruit (or chocolate and caramel if you’re feeling particularly decadent), and a rich, buttery biscuit base in one glorious ready to eat package.

We’re not the only ones who think that cheesecake is the height of wanton and shameless culinary luxury either.

Our dogs do too, or at least we think they do, as they seem to have an uncanny sixth sense that lets them know whenever a cheesecake hits the dinner table, And as soon it does? They’ll be sitting there, eagerly waiting for a piece of it. 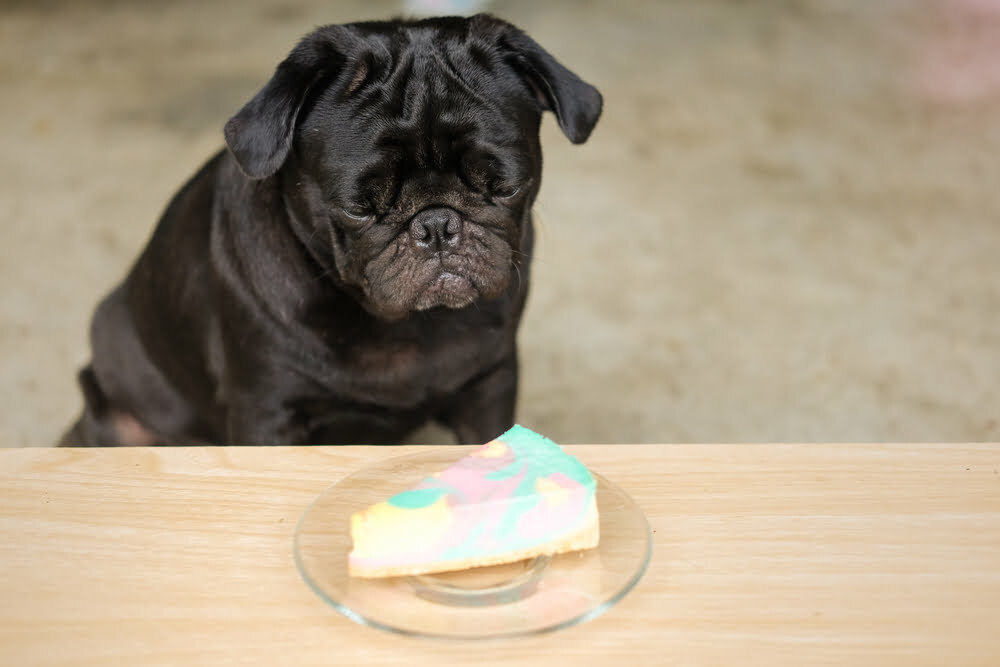 The question is, though, do we reward our dogs’ patient diligence by offering them some cake, or do we attempt to ignore it for their own good? In other words, can dogs eat cheesecake, and is it good or bad for them if they can?

Actually, that last part of the question might be something of a moot point given how bad we know it is for us, but dogs might be different. Nature might have found a way to let them cheesecake without putting on the additional weight that walks hand in hand with it…

Cheesecake And Dogs – Can They Eat it?

The question seems rather odd to us, as the answer is obviously yes. Yes, dogs can eat cheesecake, and if they were left unsupervised in the middle of a bakery that specializes in making cheesecake, then they’d probably eat every last cheesecake that they could lay their paws on.

As we know dogs can, and will eat it, that means that the question that we really need to find an answer to is “Should dogs eat cheesecake?”

Depending on who you ask, our dogs or a certified veterinary nutritionist, that question has two very different responses.

Our dogs would probably tell us, you, and anyone else who might have the keys to the cake cupboard that cheesecake is a necessary part of a dog’s everyday diet, and without it, they wouldn’t get all of the Vitamin Treat that they need in order to lead happy if somewhat less healthy lives.

The veterinary nutritionists on the other hand would almost certainly say that while dogs CAN eat cheesecake, under absolutely no circumstances, should they eat it. 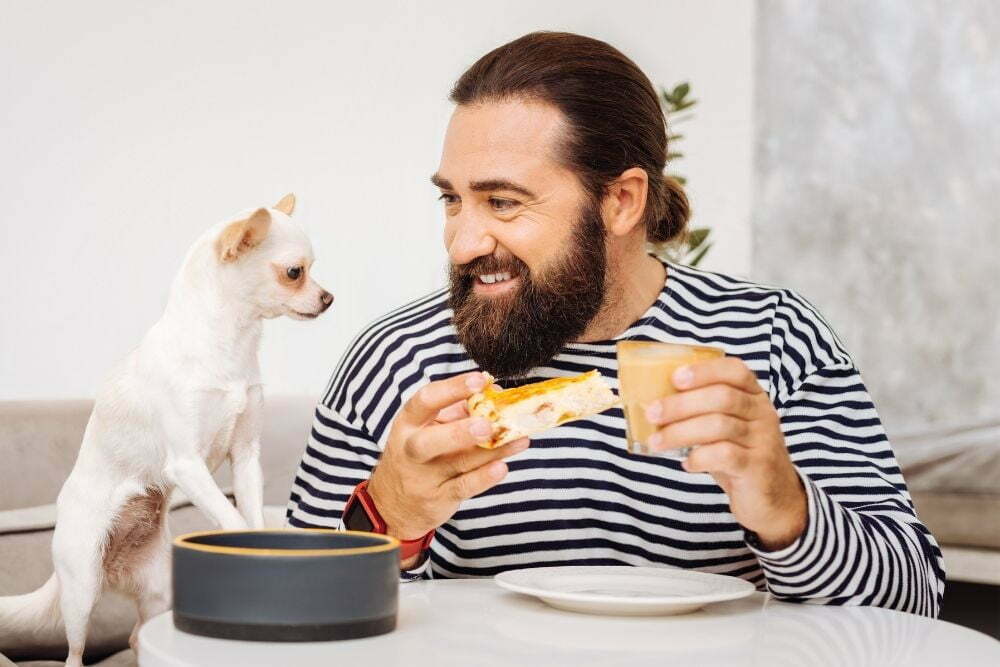 While we can, and do empathize with any dog who has a cheesecake fixation and has just been told that they can’t have their favorite sugary treat ever again, we also understand why they shouldn’t.

There are, after all, lots of delicious things in life that we crave but can’t have because they’re not good for us, and cheesecake is right at the top of the list of things that a dog shouldn’t be given by its owners if they want their hound to a live a long, healthy life.

And it’s all because of the ingredients that every cheesecake requires in order for it to join the pantheon of fantastically delicious desserts.

There isn’t a single ingredient in a cheesecake that any dog should be allowed to eat, except for maybe the fruit but that isn’t the part of the cake that they want and they’d probably turn their noses up at it if they were actually offered it, and just to emphasize the point, we’re going to list all of the things that go into a standard, straight off the bakery shelf cheesecake and explain the potential health problems they might lead to in canines.

Even though the cake is made using soft and sweet cheese, it’s still the same dairy-rich product that can twist a dog’s digestive system seven ways from Sunday, especially if that dog is lactose intolerant, which a surprising number of dogs are.

The main ingredient in the cake can make a dog vomit, lead to excessive gas and diarrhea, create an incredible amount of intestinal and dietary distress, and if they do eat too much of it over an extended period of time, cheese can be a primary contributory factor in canine obesity.

Obesity is the most worrying of all of those potential issues, as it opens the door to diabetes, cardiac disease, and the joint problems that can arise from a dog’s skeletal structure having to try and cope, and deal with unnatural and unnecessary weight gain.

Then there’s the sugar dilemma, and as anyone who has ever made a cheesecake will readily and happily tell you, the amount of sugar that goes into the average dairy-based delicacy is absolutely staggering. Why is a lot of sugar bad for dogs?

Mainly for the same reasons that an excessive amount of sugar is bad for us, and those reasons include the increased likelihood of dental problems and tooth decay, obesity (which in turn can lead to the previously described complications), and diabetes.

No, we’re just kidding. Like fruit, this is pretty much okay for a dog; the only thing that might be problematic is its high sugar content.

When you combine all of those things and the potential canine health problems they can be responsible for, it’s easy to see why you should keep cheesecake well out of the reach of your four-legged friends. It might seem, to them at least, that you’re being cruel, but you are doing it for their own good.

As long as you keep telling yourself that while your dog looks up with a pleading look in his eyes while you’re enjoying every single mouthful of your cheesecake, it should make your decision not to share your dessert with your hound a lot easier.

Dogs And Cheesecake – The Final Word

Maybe we’ve approached the subject with a little too much brevity, but the inescapable truth is this: While you can decide to eat what you know is a devastatingly unhealthy dessert and are capable of making that decision for yourself and living with the consequences of your actions, your dog can’t.

You have to make that decision for him, and as painful and difficult as it might be, you should never share a cheesecake with your dog.