Donuts. Is there anything they can’t do? – Matt Groening

Just like Homer Simpson, we would happily sell our souls for a donut. It would have to be the greatest donut that the world had ever seen, but if it was, we’d be the first to sign on the dotted line in order to enjoy the sugar-filled splendor of that most magnificent fried treat. 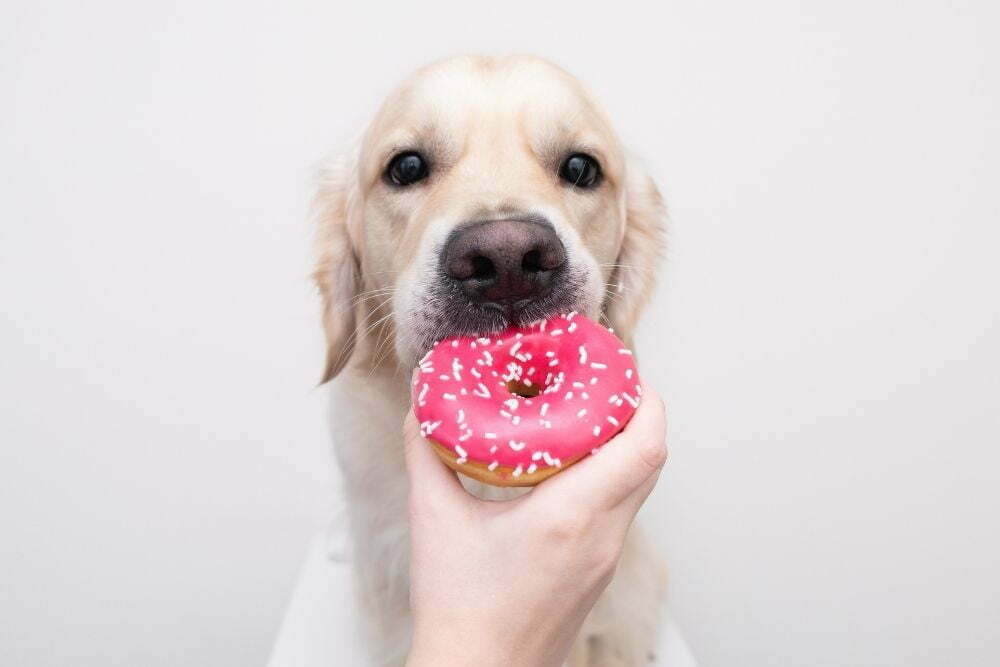 However, what we’re not willing to sacrifice on any donut-shaped altar is the health and well-being of our dog. He’s a slave to the sugary power of donuts too, and every time he sees us bring a box home from Krispy Kreme or Dunkin’ Donuts, he’s the first in line to try and lay his paws on one of the dirty, delicious dozen.

So far we’ve been able to resist his demands for one of the donuts because we didn’t know whether or not he should or could have his own donut. But he’s started to wear us down and we know that it’s only a matter of time until we inevitably give in, so in order to strengthen our resolve, we thought that it was time that we found out whether or not dogs can eat donuts.

And as you’re here, we figure you probably want to know the answer, too, so let’s dive straight into the delicious world of dogs and donuts…

Dogs And Donuts – Can They Eat Them?

There are two schools of thought about whether dogs should eat donuts or not. The first states that dogs probably shouldn’t eat donuts, while the second subscribes to the theory that dogs shouldn’t ever, under any circumstances, be allowed to eat donuts.

While we’re not wild about the second school’s ideas, we tend to believe that the first might have a point and that maybe we need to listen to what they have to say about the eternal dogs and donuts conundrum.

Okay, so yes, we’re being a little cavalier about the subject, and what we should have really said is that dogs and donuts, regardless of what your furry friend’s nose might tell him to the contrary, don’t get along.

And despite what you might be thinking about it being the extras, the flavorings, creams, and icing being the main reason why your dog can’t enjoy a donut (and you’re partly right, but we’ll get to that a little later on), it isn’t any of those things.

The main donut problem for dogs is the way that the delicious delicacy is made.

It isn’t the dough in donuts that you need to worry about with a dog. It’s the methodology that’s used to turn that dough into donuts that’s the main bone of contention.

On its own, the dough is safe enough for any dog to eat, but the minute that dough is dropped into a deep fat fryer, that’s when it becomes a problem.

Dogs shouldn’t be allowed anywhere near fried foods. As the oils, they’re cooked in and absorbed during the cooking process aren’t exactly healthy for canines.

They’re a root cause of obesity and heart disease in dogs, and while one donut won’t lead to a cardiac arrest and be solely responsible for them putting on ten or twenty pounds in weight, it never ends with just one donut. One donut always leads to more donuts.

If they’re allowed to taste a donut, a dog will inevitably want more and will beg, plead and whine until they get their own way (and another donut), but if they’re never allowed to have one, they won’t know what they’re missing, and eventually, they’ll stop asking to try them.

At least they will, in theory. In the real world, though, eating a donut in front of your dog is an exercise in determination, a battle of wills between you and him, and one you should always endeavor to win.

Toppings And Fillings And Donuts… Oh My!

As we’ve already mentioned, it isn’t just the frying that’s problematic for hounds, the toppings and fillings that are used in donuts can also be devastatingly unhealthy for them.

Chocolate, as you’re probably aware, is toxic to dogs, and the higher the cocoa content, the more dangerous it is, and as it’s one of the most popular toppings, and creams used to fill donuts well you can put two and two together and see we’re going. Fried dough and chocolate? It’s the equivalent of a canine coffin nail.

The main topping culprit isn’t chocolate though, it’s sugar. Almost every donut topping or filling contains enough sugar to sweeten ten cups of cop strength coffee, which is ten times too much sugar for your hound.

Dogs might love sugar, but sugar doesn’t love them and too much of it can lead to all sorts of doggy dental problems that usually manifest themselves as tooth decay, obesity which can lead to heart disease and joint problems, and the biggest sugar-centric health concern of all, diabetes.

And if you add sugar to the already lethal combination of fried dough and chocolate, it’s easy to understand why donuts are ticking doggy time bombs.

Donuts And Dogs – The Last Word

This is where we usually tell you that a little bit of what your dog fancies won’t do him any harm and that everything is fine in moderation, but donuts are the exception to that rule.

Under no circumstances, no matter how much they beg, plead and drool, should you ever let your dog have a donut. There are some things that dogs were never meant to eat, let alone even try, and donuts are at the top of that list.