Dragon fruit is very subtle, very delicate. So you want to be careful not to kill it with things that have a very strong flavor – Jose Andres

The first things that spring to mind when you’re thinking about giving your dog a tasty, well-deserved treat are probably bones and rawhide chews.

Dragon Fruit, even if it is on the list of possible snacks that you’ve drawn up for your canine, is one of the last things that most dog owners would even consider, and for a good reason.

Dogs are, after all, carnivores, and their favorite go-to mid-meal tidbits are usually protein-heavy and meat-based. Unless they’re offered a cookie instead, in which case they’ll almost always choose the cookie, but then who wouldn’t? 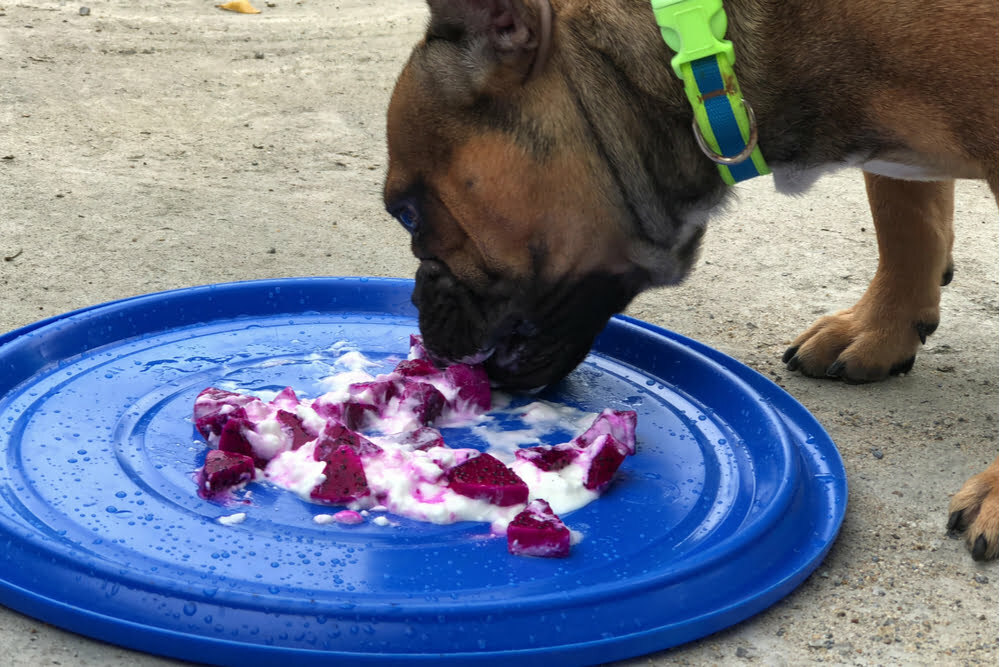 Fruit and vegetables might seem like an odd choice of snack for your dog, but don’t be fooled by the myth that dogs only ever ate meat in the wild and that unless a snack is rich in protein it isn’t good for your dog.

Your best pal? He’s actually closer to being an omnivore than he is to being a true carnivore, as you probably know from the way he reacts to a candy bar being unwrapped or a donut box being opened.

If something smells and tastes good, then he’s going to want to eat it, which is why the idea that he might be partial to Dragon Fruit isn’t all that absurd, and sort of makes sense from a certain point of view.

Having said that, can your dog actually eat Dragon Fruit? Is it good or bad for him, and while we’re on the subject, what is Dragon Fruit?

Dragon Fruit – What Is It?

The first clue is in its name, it’s a fruit that’s indigenous to South America and Asia, and its spiky exterior and tough skin hide a sweet, delicate, and delicious fleshy interior that’s considered to be a ”secret” delicacy by those who have fallen for its sugary charm.

And if it wasn’t for the French, there’s a good chance that the folks in Europe, and here in the United States wouldn’t even know that it existed at all.

While it’s generally accepted that the French traders were the first to export Dragon Fruit from its native land in the latter half of the nineteenth century, no one actually seems to know which native land they exported it from.

Did the first Dragon Fruit make its way to France from Vietnam or Chile? Don’t worry, it’s a rhetorical question, we know that there’s no evidentiary proof, we’re just trying to reinforce and exaggerate that point.

How Do You Eat Dragon Fruit?

The skin is tough, it looks weird with all the spiky protrusions, and we have no idea who first thought it was a good idea actually to try to eat one and why they did, but we’re glad that they did.

Dragon Fruit is actually incredibly sweet and has an almost floral taste, and while it’s wonderful to slice one open and just sit back, scoop out the insides and savor its succulent flesh, we have to admit that the best way to eat it is in the flavored ice creams that are an Asian specialty.

Oh, and don’t be put off by the different colors, as Dragon Fruit can be purple, pink, red, or yellow, and the color doesn’t significantly impact the fruit’s taste. 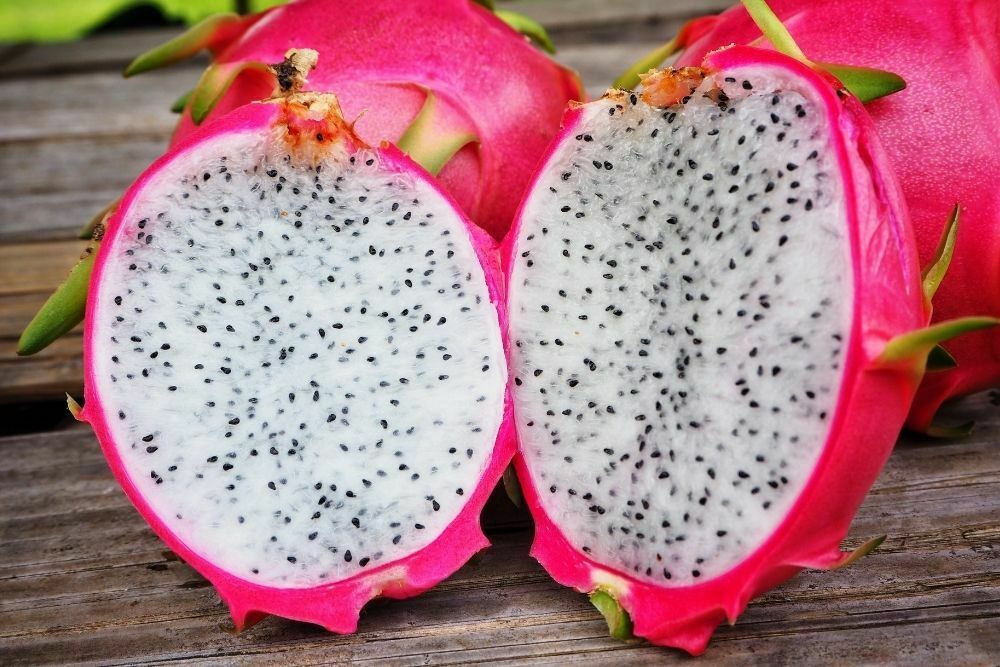 That’s all well and good, and while a little information always comes in handy, but the main reason why you’re here is to find out if dogs can eat Dragon Fruit.

And the good news is, yes they can as long as you cut off the skin, throw it away, and just serve the inside flesh of the fruit to them, then yes dogs can eat Dragon Fruit exactly the same way that we do.

It just keeps getting better and better too, as Dragon Fruit seeds, unlike a lot of seeds in other fruit, are completely non-toxic to dogs, so you don’t have to remove them before you give your hound a tasty Dragon Fruit treat.

Is Dragon Fruit Good For Dogs?

It is, it really, really is. Why? Because Dragon Fruit is full of Vitamin C (which is beneficial to your dog’s cognitive functionality, helps to ease his aching joints as he gets older, reduces arthritis inflammation, and makes sure that his immune system is functioning at the top of its game), it’s low in calories which means that it’s a good snack option for slightly heavier dogs who need to lose a few pounds, has a high fiber content so it’s an ideal weapon in the fight against cholesterol and as it’s also packed with antioxidants it can help to prevent certain canine cancers.

Dragon Fruit is one of those secret dog superfoods that no one seems to know about.

Can Dragon Fruit Be Bad For Your Dog?

It’s all a question of moderation. Too much of any good thing can be bad for any of us, and the same rule applies to your, or any other dog and Dragon Fruit.

Eating too much of it can cause dietary distress and lead to vomiting and diarrhea, but if they eat in moderation, it’s an absolutely safe way to give your dog a tasty and unusual treat.

Having said that, just because dogs can eat Dragon Fruit doesn’t necessarily mean that they will eat it.

Dogs can be fickle as far as food, especially fruit, is concerned, so don’t be alarmed if your dog doesn’t wolf down the Dragon Fruit you’ve offered. It’s probably just because he doesn’t like the smell or the taste. Or it might be because he’s waiting for you to break the candy bars out, as he knows that there’s a better snack on its way.

The Last Word on Dogs And Dragon Fruit

Can dogs eat Dragon Fruit? They absolutely can, and not only can they eat it, but it’s also good for them.

So, the next time you’re looking for something slightly different for your boy, pop into your local supermarket and see if they’ve got any South American superfruit. It might just be the snack that changes your dog’s life.