As hard as it is to picture a dog fishing for and trying to catch seafood, it isn’t actually difficult to imagine them eating it, especially if you’ve ever enjoyed a tuna sandwich or a plate filled with freshly caught and fried scallops.

If you’ve eaten in front of your dog, you’ll remember how eagerly they watched you, how they begrudged you every mouthful, and how they realized that they might not actually be given at least a little taste of what you were eating, they began to whine.

And then they continued whining long after you’d finished because they couldn’t believe that you didn’t share your scallops or tuna with them. 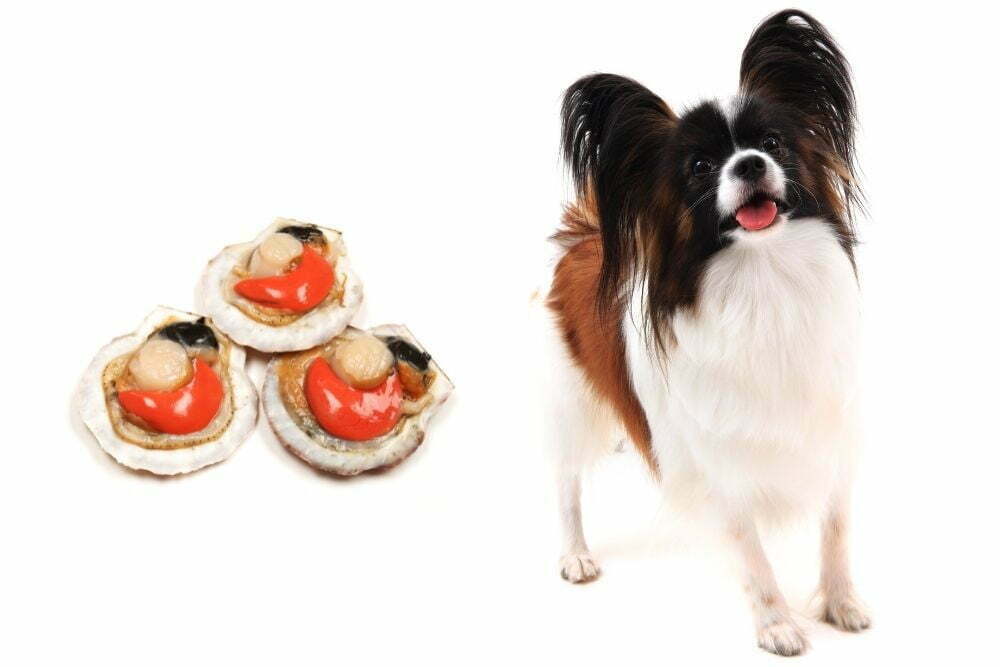 It’s no use trying to convince your dog that gulping down a scallop or two might not be good for him because, as far as he’s concerned, anything that smells as wonderful as cooked scallops do, has to taste good and can’t be bad for him.

So, who’s right? You or your dog? Can your dog eat scallops, and if he can, will they cause the dietary distress you’re worried they might, or will they actually be good for him? Let’s find out, shall we?

But if we were you, we wouldn’t bet against your dog and his super-sensitive nose being right about the multiple members of the clam family…

What Is A Scallop?

Before we start getting into the ins and outs of whether or not your dog, or any dog for that matter, can actually eat scallops, we thought it’d probably be a good idea to call a quick timeout in order to discover a little more about scallops and what they actually are.

Okay, so you probably notice the reference that we made to clams, and while it’s true that most clams are usually loosely grouped together under the collective, catch-all term “scallops”, mollusks are too.

Generally, at least as far as chefs and their menus are concerned, the word “scallop” doesn’t refer to the whole clam or mollusk. It just describes the adductor muscle, which is the part of the shellfish that’s cooked and served in restaurants all over the world.

If you’re uncomfortable with the idea of eating things that are a little off the beaten path, then you might want to skip the next paragraph, as we’re going to reveal a little mollusk and scallop secret that might make you think twice about how much you enjoy eating this denizen of the ocean when it’s fried in a little butter, garlic, and chili oil.

Mollusks don’t just live in the sea, they also live on land, and the most famous land-based mollusk is also a highly prized ingredient in French cuisine.

Scallops and snails are part of the same mollusk family, but as we’re not exactly experts in the finer points of the culinary history of France, we’re not sure which became a mainstay of the nation’s diet first, scallops or snails.

Dogs And Scallops – The Inescapable Truth

If you bet against your dog and his incredible nose, then you’re going to need to say sorry to him, and the next time that you decide to add scallops to your weekend menu, you might want to buy a couple more and cook them as an apology gift for your best pal.

The inescapable truth is, that dogs can eat scallops, and they’re actually if they’re cooked and prepared properly, good for them. That’s right, you didn’t misread what we just said, scallops are actually good for your dog.

Why? Well, as they’re a rich source of potassium and magnesium, they can provide your dog with some of the essential minerals and vitamins that he needs, and as scallops are a protein (at the end of the day, they’re just meat), they can also help to keep your dog’s muscles healthy, lean and strong.

You bet against your dog, didn’t you? We can’t say we blame you because we probably would have done the same if we hadn’t seen our old grandmother cooking scallops for her dogs and explaining how to prepare them so that they were safe, nutritious, and delicious her faithful hounds.

Because even though they’re perfectly safe for dogs to eat, you can’t cook scallops the same way for your four-legged friend as you do for yourself.

Actually, that’s not exactly true, you can, and they’ll eat them if you do, but it isn’t the healthiest way to serve them to a dog.

The first rule of serving scallops to your dog is the same as it is for humans, never give a raw scallop to your hound. While dogs, like humans, can eat some raw fish, they can’t eat raw shellfish, and as scallops are primarily clams and mollusks…

Well, you see where we’re going, can’t you? Feeding raw scallops to a dog is akin to answering the door to salmonella poisoning when it knocks, inviting it in for a cup of coffee, and letting it put its feet up in front of the fire.

In other words, if you give your dog raw scallops, you’ll make him very ill.

That said, the way you should cook scallops for your dog is slightly different from the methodology that you’ll use to prepare them for yourself. All the seasoning, oils, and butter you throw into the pan to cook them normally?

Forget all of that. In fact, use a different pan for cooking the scallops for your dog. Just heat it up and drop them straight in, cooking them for two minutes per side or until they turn a light golden shade of brown.

They’re ready as soon as they do, and after they’ve cooled down, you can put them straight into your dog’s bowl and serve them to him. No mess, no fuss, and no seasoning, just pure cooked scallops.

The Final Word On Scallops And Your Dog

So yes, the simple, straightforward answer is, dogs can eat scallops, and they are good for them as long as they’re cooked and prepared the right way.