Yes, dogs do appear to get jealous. However, it’s difficult to know how dog jealousy might compare to a human experiencing the same emotion. What we see as jealousy might more accurately be described as asserting dominance. Dogs can appear to be jealous of new family members, new pets, or other people in the house.

There are a few key behaviors that indicate a dog is experiencing jealousy (or something similar). They insert themselves or whine when another pet or person seems to be getting attention. They can become pushy, and even aggressive, especially toward strangers.

A dog may start to pay extra attention to the owner, trying to get into their space. A jealous dog may even begin to show basic behavioral problems such as going to the toilet indoors.

If you think your dog is acting jealous, you need to take steps to curb this behavior. For owners with more than one pet, it’s important to avoid giving attention to one over the other, even if you don’t realize you’ve been doing it. Don’t pet one dog at the expense of the other, involve them both in treat time, and have two of every toy.

What dog breeds get jealous?

Every dog is different, which means there’s potential for jealousy across all breeds. However, there are some breeds that are more likely to get jealous than others. These dogs enjoy being the center of attention, and may act up if they feel they aren’t getting enough of your time.

Dog breeds that are particularly likely to get jealous are: French bulldogs, Labrador retrievers, Golden retrievers, American pit bull terriers, Boston terriers, Cocker spaniels and English springer spaniels, and the Brussels Griffon. These breeds enjoy the spotlight, and like to feel they’re getting all the fuss.

Often, these emotions can lead the dog to feeling jealousy when they aren’t getting the right amount of attention. They can be jealous of other pets, humans, and even some toys.

Just because a breed isn’t prone to jealousy, doesn’t mean your dog won’t experience envy. There are many reasons why jealousy may be triggered in a dog. This emotion can often manifest in a pushy or aggressive attitude.

If you’re introducing a new pet to the household, be sure to show each dog equal attention. Teach them to get along by rewarding them together when they display good behavior.

Which dog breeds are possessive?

A possessive dog is one that is looking to establish control. They may be feeling insecure, or lack confidence, leading to them acting out. Possessive behavior can quickly become aggressive. All dog breeds have the potential to become possessive.

There can be a genetic component to a possessive personality, which means some breeds are more likely to display this characteristic. The breeds that often inherit possessive traits include: Jack Russells, Golden Retrievers, Cocker Spaniels. Border Collies, and Rottweilers. Breeds that have a tendency to jealousy may also turn possessive, if they feel their needs aren’t being met.

Possessive behavior can be identified when a dog starts snapping, growling, and biting when a human or other animal approaches an item the dog considers ‘theirs’. A dog may be possessive of their food, their toys, their space, or their owners. This is considered resource guarding, as the dog feels compelled to keep items safe.

Possessive behavior may begin as relatively mild actions, such as lip curling and slight growling. However, this could escalate to biting. If your dog starts to show possessive behavior, regardless of breed, steps should be taken to correct the problem. 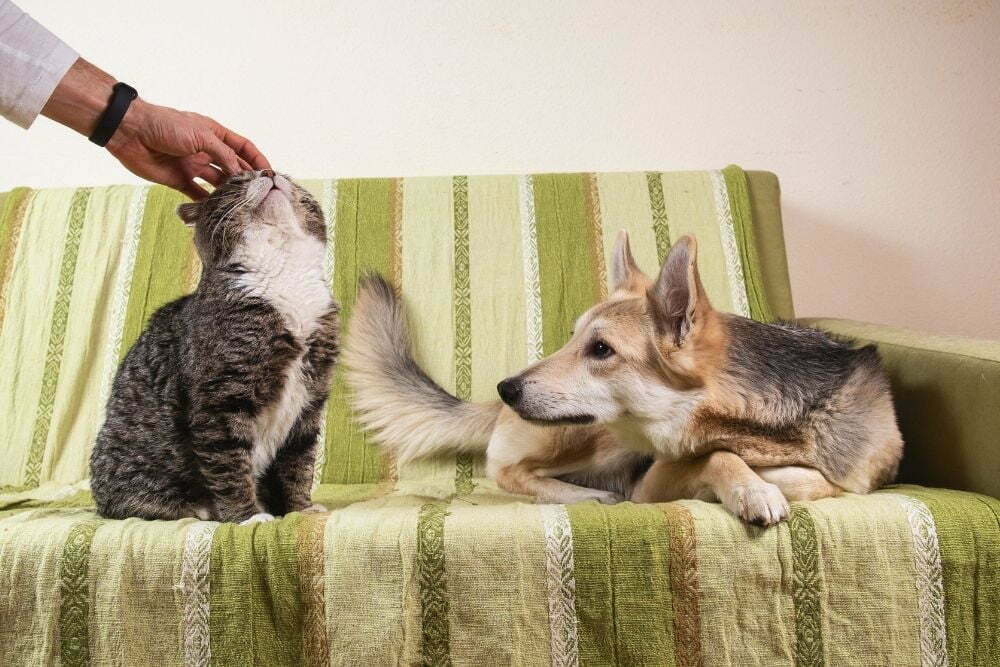 Boston Terriers love to be the center of attention, and that can make them quite jealous. One reason a Boston Terrier is a good family pet is the intense bonds they form with their owner. A Boston Terrier will love to spend time playing and relaxing with loved ones. So when the dog isn’t getting the attention it feels it needs, they may act out in jealousy.

Boston Terriers were bred to be companion dogs, which is why they became such popular pets. A Boston Terrier may happily follow you around from room to room. Which means when they think you’re giving another pet or person too much attention, they feel something we perceive as envy. Boston Terriers are sensitive dogs, eager for praise and affection – and they might not enjoy seeing others get it.

A common trait of Boston Terriers is barking when someone new approaches the house. These normally quiet dogs suddenly unleash the noise when someone heads towards their territory! This can be a sign of jealousy. Watch out for whining, barking, and even nipping when a visitor steals your attention. A Boston Terrier should be socialized from a young age to prevent jealousy.

Pugs are incredibly loyal and love to be with their owners, so they can get jealous. Pugs were bred to be companions for the wealthy. A Pug was meant to sit in luxury on its owner’s lap as a prized possession. These traits were bred over centuries, and we can still see them today. It’s one of the reasons a Pug may seem to be jealous.

Pugs really love their owners, and they want to be loved in return. They can have quite a cheeky personality, and will try to make their owners happy. So when their human seems to be getting enjoyment from something else, be it another pet or a person, a Pug may find their feelings hurt. Pugs are sensitive animals, and can become anxious if they think they’re being ignored.

A Pug may show its jealousy by acting out. They can start whining, barking, and growling. A Pug may even become aggressive, pushing and shoving at the other animal that has your interest. However, they also can feel agitated, and be unable to settle down. If your Pug starts to display jealousy, this needs to be corrected immediately with positive reinforcement of good behavior.