It’s no secret that dogs are much better at smelling things than humans. It is said that dogs can smell up to 100,000 more than humans, which is pretty mind-blowing – especially considering the amount of nastiness they like to smell on walkies.

As dogs can be trained so easily, they can be wonderful additions to the police force as drug dogs. They are good for sniffing (pardon the pun) marijuana, explosives, heroin, opiates, and MDMA (or molly), which is why they are so often seen at airports, festivals, or the scene of a crime.

As drugs and variations are abundant in the world, it might lead you to question whether dogs can smell all types of MDMA or molly. We have done some extensive research to explain why and how certain clever drug dogs are trained to smell molly and MDMA in this ultimate guide. 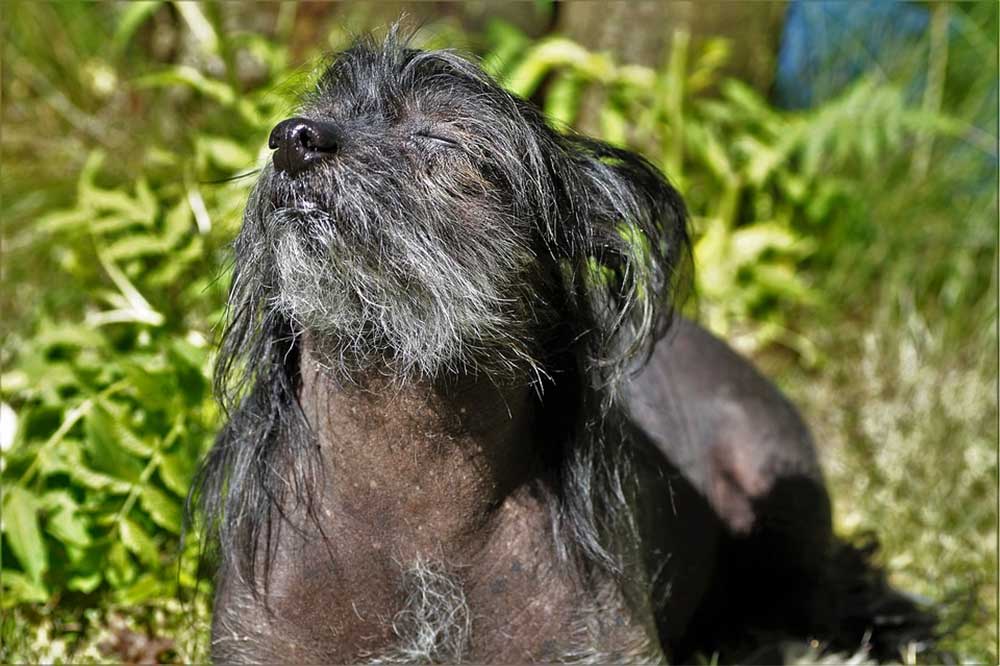 Most drug dogs are trained to smell MDMA, or most commonly known as ecstasy or molly. However, it depends on the type of training the dog has undergone, as some dogs will only be trained for smelling certain drugs or other objects such as money, blood, contraband objects, and explosives.

In short, drug dogs will be able to smell whatever they have been trained to smell. There is no way of telling what each dog is trained to smell (unless you intend on bringing MDMA to an airport, which isn’t recommended), as their trainers and officers are unlikely to tell you the answer.

For example, some drug dogs will be trained to only smell marijuana – which is especially the case if they are still in training and going to festivals and busy events.

If a drug dog has been trained to smell MDMA or molly, they will be able to smell the drugs regardless of how wrapped they are. Remember, their sense of smell is 100,000 times better than humans. Dogs usually have around 220-300 million olfactory receptors in their nose, compared to a feeble 5 million olfactory receptors in a human nose. Ecstasy doesn’t have a distinctive smell to humans, especially if it has been wrapped in foil or plastic, so the chances of a drug dog ignoring a bag filled with MDMA is highly unlikely.

Untrained household dogs, however, have not been trained to detect drugs such as MDMA, so they are unlikely to alert an individual of a suspected drug. This still won’t stop them from sniffing everything around them, especially if it is a foreign smell like ecstasy.

Are all drug dogs trained to smell molly and MDMA?

When it comes to how accurate they are, it is said that drug dogs will correctly detect the smell of MDMA just over 50% of the time. Whilst this means that they are wrong half of the time, it goes to prove just how good their sense of smell is because they could easily be detecting traces of something else. It also mostly depends on how well-trained they are, as experienced drug and sniffer dogs will be more accurate over time.

What do drug dogs do when they smell MDMA?

Drug dogs are trained to be fairly subtle when they smell drugs like MDMA, despite what the movies might convince you. They won’t go absolutely crazy if they smell drugs, because this could cause damage to the person’s belongings, or might encourage the dog to bite or scratch, which would give the perpetrator a reason to try and sue the police officers.

Instead, drug dogs respond in what is called an aggressive alert. Despite the name, an aggressive alert is designed to cause no damage. Upon detecting the scent, the dogs will work to sniff and scratch towards where the scent is coming from without damaging surrounding objects or areas of the property.

They are usually trained to complete a command to indicate to the officer or their trainers that they have detected something, which is usually done in the form of bark, lying down, or staring at their trainer. Most of the time, they will simply look down at where the scent is coming from.

Police dogs and airport drug dogs are trained in similar ways to detect the same smells. Think about the amount of people from all over the world who attend an airport daily – that is potentially a lot of drugs that go undetected without drug dogs.

As with most other drugs, airport drug dogs are usually trained to detect amphetamines such as molly, MDMA, and ecstasy.

It is suggested that airport drug dogs are more likely to be at airports for international flights rather than national ones depending on each state’s and country’s laws, but this isn’t proven to be true.

How can drug dogs smell drugs?

Drug dogs, or sniffer dogs, aren’t trained to smell drugs. They are trained to find a treat or toy. It’s all about positive association – in the early stages of training, they are given a reward when they detect the right scent.

As the training progresses, they will only be given a reward when they complete the correct command after detecting the scent, which is usually a bark, sit, down, or stare command.

Here is a general explanation of how drug dogs are trained to smell drugs:

There are two types of ways that sniffer dogs smell drugs. Both are fairly subtle and designed to not encourage the perpetrator to run away or cause harm to the dog. Drug dogs are mostly trained to perform an aggressive alert, which is where they will dig and paw at the detected scent without causing damage to other objects to the personal property. Sniffer dogs who are trained to detect explosives perform passive alerts, which is where they gently detect explosives without scratching the surface to prevent an accident.

Training a drug dog can take years of training, which is constantly adjusted throughout their lifetime. These dogs are usually assigned to a single trainer and go through training every year or so to make sure their skills are still reliable.

Each dog will usually be trained to detect specific scents to minimize the chance of false detections. They can be trained for airports, festivals, businesses, schools, prisons, hospitals and mental health institutions, homes, and more. Their training means they can detect scents both in buildings and on people. 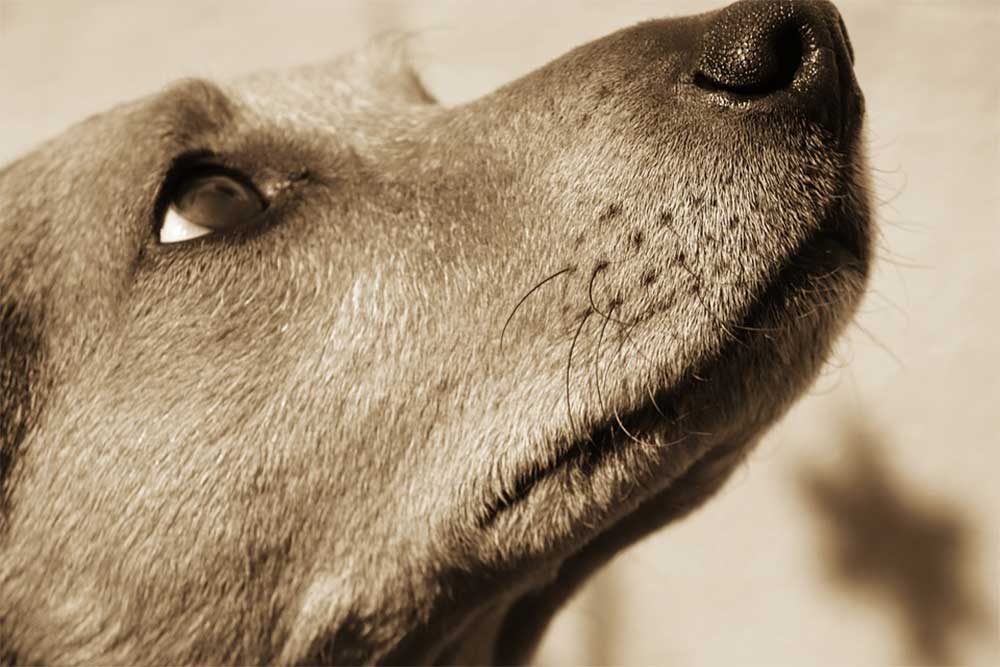 Whilst any dog can be trained to do whatever you like, certain breeds are much better suited for detecting drug scents. These include:

Drug dogs are trained with varying strengths of traces of drugs, including MDMA, during the early stages of training, so they know exactly what a “tiny” amount of the target drug will smell like. This means that it doesn’t matter what form the drug is in because the dog will still be able to smell it – even dissolved MDMA.

Remember, dogs have between 220 million and 300 million olfactory receptors compared to 5 million in a human nose, so they can detect a variety of scents – even if they are blended together. This means that it doesn’t matter if the drug has been dissolved into a liquid, because they will be able to detect the scent regardless.

Think of it like a meal such as a casserole, pasta sauce, or stew. Humans will only smell the distinctive overall smell, whereas dogs will be able to detect intricate parts of the meal such as the meat, carrots, or onions. The same applies to drugs and even alcohol, as some dogs have been trained to detect the scent of alcohol in schools to check for underage drinking.

Most drug dogs are trained to detect a single drug. For example, a dog who is an expert in detecting ketamine might not have the same abilities when it comes to detecting cocaine.

However, due to the intelligence of dogs and their heightened sense of smell, they are said to act in the same way regardless of the drug. This means that, most of the time, drug dogs will be able to smell multiple drugs.

Drug dogs have an awesome reputation when it comes to detecting drugs, especially molly or MDMA. Due to their near-perfect sense of smell and intelligence, they can be trained to detect virtually any scent – whether it’s alcohol, explosives, contraband items, or drugs.