Target is one of the most popular stores, and it’s become pretty iconic as you can find almost anything in them and there are often really good deals and special finds. Who hasn’t gone to a Target, right? Most people will include it as part of their errands routine because you never know what you might find!

But what if you want to take your dog with you? Sometimes you just don’t want to leave your pet waiting at home, all alone, and instead, you want to bring them along with you on whatever the day brings. And with more and more places becoming dog-friendly, this shouldn’t be a problem, right?

But what about Target? Can you take your dog there or will you be stopped at the door, unable to enter as long as you have your pet with you? Sadly, it’s the latter one. Target has a pretty strict no dog policy, so no matter how well-behaved or how cute your dog is…you’re not allowed in the store with them.

Of course, there are a few exceptions and some bits and pieces to unpack in the policy, so let’s get right into it!

Targets all over the country have the same rules regarding their dog policy: no dogs allowed. That is, except for service dogs, which are usually allowed everywhere because they’re a necessity to the owner.

And even if you have a letter from your doctor stating that you need your emotional support dog with you, that still doesn’t turn your dog into an official service dog, so no, it will not be allowed into any Target store.

But let’s look at that difference in more detail:

Service dogs are the only exception to the no-dog policy in Target stores. Service dogs are thoroughly trained to provide a specific service to a person with a life-limiting condition, like for example blindness. So the service dog will help the dog-owner with day-to-day tasks and with getting around in the world, so that they can do so without the assistance of other people.

Usually, service dogs will be wearing a high-visibility harness or vest, so they’re pretty easy to identify! And by law, service dogs are allowed everywhere, as they are a necessity to their owners.

Also, it’s important to never interact with a service dog, as that could distract them from the important job they’re doing! (So no, you can’t pet service dogs even though they are very cute, remember that they are on a job!)

Therapy and emotional support dogs also go through some training, but it’s not necessarily official training as any dog can become one if it passes the right tests. Essentially, the purpose of these dogs is to be an emotional comfort to their owners and to help relieve the symptoms of various mental health issues, such as depression, anxiety, or panic attacks.

As they serve a specific purpose, these dogs aren’t necessarily classed as pets, and it means they have more access to places. For example, you might be able to have your dog on the plane with you if you medically need it for emotional support. (You should have an official Doctor’s letter to prove this!)

However, they’re not as essential to the owner as service dogs are in their case, so Target’s no-dog policy still takes effect. Sorry, but no emotional support or therapy dogs allowed!

As for all other dogs, regardless of their breed, size, or behavior, the policy is pretty clear: they are not allowed.

Can Targets be Dog Friendly?

Okay, so Target’s dog policy is pretty clear: no dogs are allowed. But could certain Targets be a little more dog-friendly?

You might have seen videos of people walking around Target with their dog, as it happens more often than you might think. But if the policy says no dogs, then how can this be?

Well, one thing is the actual rules, and another thing is how they are actually applied.

A lot of Target employees have come forward and stated that they don’t actually care if you have your dog with you in Target, that is, as long as it is well behaved.

We can’t really blame them, it would be quite a hassle to ask everyone with a dog to leave, and to have to stop people at the door constantly. So it makes a lot more sense to turn a blind eye simply, and only to step in if a dog is causing mischief or disrupting the peace of the store.

So it’s worth checking if your Target has a history of people walking around with their dog without any issues because in that case you can probably just walk in with your dog, go about your business, and then leave without anybody stopping you!

Also, be aware that although your Target employees might be dog-friendly, the store itself isn’t, so there won’t be any infrastructures in place for dogs such as drinking bowls or places for them to go relieve themselves.

And if your dog does end up peeing or pooping in the store…you could be in big trouble! (Although our guess is that the employees would be in bigger trouble for having let you in with your dog in the first place!)

The only official exception to Target’s dog policy is service dogs, as they are allowed everywhere by law.

But let’s say that you just have a regular pet dog, and you really really really want to have your dog with you when you go into the target. Are there any remote possible exceptions to the policy?

What if you carry your dog? Some people have actually tried this, stating that if they are carrying their dog then the dog isn’t actually stepping on the floor of the store so isn’t technically walking into the store. It’s a nice try, we’ll give them that…but no. Sadly, even if you offer to carry your dog the entire time, the policy is still pretty clear on the no dogs bit. 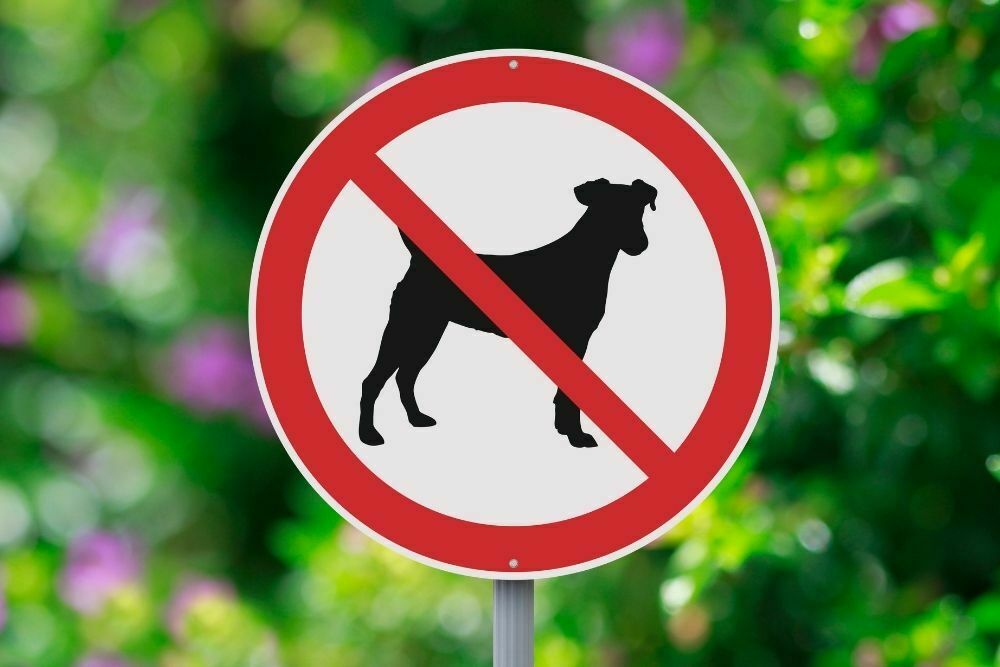 Why does Target not allow dogs?

If you love your dog, you might be wondering: why doesn’t Target allow dogs? It can seem pretty unfair, especially if your dog is super well-behaved compared to most children!

One of the main reasons is that, amongst other things, Target sells fresh food, and this means that they have to follow some very strict rules on health and safety. After all, if any of the food got contaminated and caused harm to a customer, Target could be in deep trouble!

So dogs aren’t allowed because they could come into contact with the food and contaminate it, whether it’s by sniffing at it or licking at it, or grabbing stuff while the owner looks away.

Also, dogs could pee or poop inside the store, and that’s a big no! That would cause serious hygiene issues, and a lot of cleaning up would be needed in order to re-adhere to the health and safety regulations. So to avoid any of that hassle, Target simply doesn’t allow dogs.

Another possible reason could be to avoid any sort of disruptions, confrontations, or issues. Some people are scared of dogs, or maybe a dog could start a fight with another dog. There are plenty of things that could happen when allowing animals into a store, so it’s kind of understandable that they want to prevent any of them, even if the chances are low.

So basically, it can be frustrating to have your dog banned from the store, but they do have their reasons!

What does the law say about dog policies?

Target has a very clear no dogs allowed policy, but when it comes to rules and regulations, the law is above everything else. So what does the law say about allowing dogs into stores?

Well, the Food and Drug Administration’s Food Guide, which is the same across all states in the country, clearly states that live animals (including dogs) are not allowed within food establishments. This, unfortunately, includes grocery stores, as well as restaurants, coffee shops, and similar.

The reason for this is to prevent the food from becoming contaminated, and animals are seen as a health risk in that regard as they could be carrying a number of different harmful bacteria, not to mention that they could infect the food with urine, feces, drool, and dirt.

The chances of your dog actually doing this are very low, but the law has to take all risks into account and has to set about the necessary measures of precaution, just to make sure that it never happens and no person comes to harm from ingesting contaminated food.

The exception to the law, as usual, is service dogs. As they are seen as a necessity of high priority for their owners, they are allowed to go with them everywhere, without limitation. So service dogs are required by law to be allowed into any establishment, including those with food.

Do other stores allow dogs?

It is becoming increasingly popular for stores to make an effort to welcome dogs in the safest way, making the place dog-friendly while respecting the health and safety regulations. So although Target doesn’t allow dogs, other stores might!

Nevertheless, as the law is quite clear on no dogs being allowed in places where food is served or sold, it is highly unlikely for any grocery store to have a dog policy that welcomes them in. other types of stores, on the other hand, specifically the ones that don’t sell or serve any food, are perfectly fine to accept dogs if they wish to, so those are the ones to look out for!

Some dog-friendly stores are:

Basically, if there’s no food in the store, you should assume that your dog is allowed, unless they tell you otherwise. In which case you can ask them, well what’s stopping you from being dog friendly? Not the law!

Let’s sum the whole article up. Basically, Target has a strict dog policy that states that dogs are not allowed into any of its stores unless they are official service dogs. So sadly, you cannot go into Target with your dog.

You might still be able to walk into Target with your dog, as long as your dog is well-behaved because the employees won’t really mind. But officially speaking, it’s a no-dogs allowed palace.

This is also backed by official laws, as dogs aren’t allowed in stores where food is sold or served (except service dogs, as per usual), so there really is nothing Target can do about it!