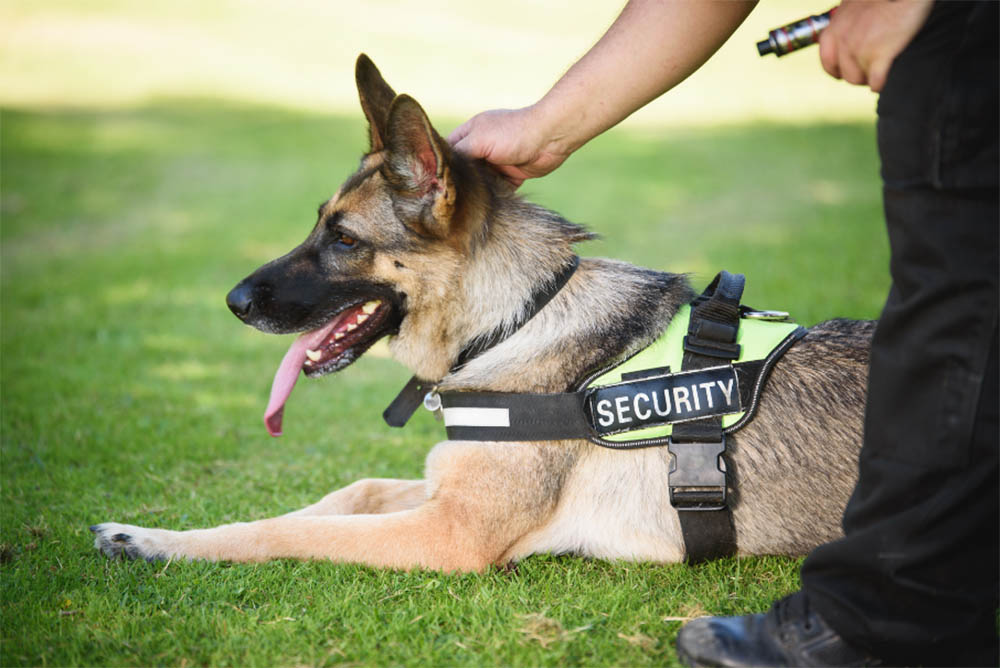 Sniffer dogs have been used by police and customs security for many years. Thanks to the powerful canine nose, they’re used to detect illicit substances in a whole host of places including airports, festivals, and during drug raid operations.

Sniffer dogs have a very strong smell, stronger than humans, thus can detect various drugs in people’s luggage or belongings. They get trained by dog trainers to become part of law enforcement especially when it comes to narcotics.

They can also be used to help law enforcement to find human remains, firearms, explosives, and even invasive species. But one of their most useful assets is their ability to hunt down and seize illicit substances.

Most sniffer dogs can be trained to pick up the smell of marijuana, cocaine, heroin, methamphetamine, and opiates.

But how about LSD?

As LSD has no natural scent, it can’t be detected by sniffer dogs. LSD and acid tabs often just consist of small concentrations of liquid dropped onto a tiny piece of absorbent paper.

This in itself makes it difficult for dogs and law enforcement to detect. However, on very rare occasions, it may be possible for a highly trained police dog to hunt down LSD and acid tabs by detecting the odor of chemical impurities present in the drugs.

These impurities are usually a result of the manufacturing process but can sometimes be the result of cross-contamination of banned substances.

The average police sniffer dog only has the capacity to learn to detect 3-5 different drugs.

Naturally, law enforcement is going to want to target the substances that are considered “problem” drugs in that specific area and therefore train their dogs accordingly.

Police dogs are more likely to be preoccupied with catching those carrying cocaine, heroin, and other narcotics.

It’s important to remember that police sniffer dogs will only hunt and track down what they have been trained to track down.

For example, a study published in 2019 found that dogs have the ability to accurately sniff out cancer in the blood. So it’s safe to say that if dogs can smell cancer cells, they can certainly smell chemical impurities used in LSD manufacturing.

“Dogs have smell receptors 10,000 times more accurate than humans, making them highly sensitive to odors we can’t perceive. A new study has shown that dogs can use their highly evolved sense of smell to pick out blood samples from people with cancer with almost 97 percent accuracy.” (Source)

Despite this, unless a specific police force is working on a huge operation to bust a huge LSD ring, it’s unlikely that their sniffer dogs will be trained to track down LSD and acid tabs.

You’ve probably seen stories in the news of criminals being caught with LSD by sniffer dogs, but this is usually because the criminal is a prolific drug dealer and has other narcotics in their possession. This would be what the dogs are drawn to, rather than the acid tabs themselves.

Someone on an online forum discussing the topic had this to say:

“I have worked in law enforcement, and am a chemist. Now I concede that it is possible for a dog to smell chemicals that have the potential to be leftover in a batch of LSD, but that being said those chemicals are almost never present in any meaningful quantity.”

While this account should be taken with a pinch of salt, as the source is anonymous- it does help to provide insight into how sniffer dogs really track down LSD.

Usually, police sniffer dogs are trained to detect the most popular narcotic drugs that have flooded the black market. While LSD is referenced a lot in jokes and movies, it’s not actually that common.

In fact, it’s pretty rare. This is most likely due to the fact that LSD isn’t an addictive substance- so naturally, there is less demand for it.

This ultimately means that training police sniffer dogs to track down LSD and acid tablets would be economically inefficient and would be a poor use of resources. This is especially the case in areas where there is a severe heroin or methamphetamine problem.

These drugs are extremely harmful to users and those around them, far more so than acid.

Police resources are limited, therefore they have to prioritize the more serious drugs in order to keep as many people safe as possible. Training sniffer dogs isn’t an easy task and it’s extremely time-consuming and costly.

Often, sniffer dogs are beagles. It is not necessarily because they have a better sense of smell than other dogs. This breed is used because it is not very large or intimidating.

In most cases, members of the public won’t object to a friendly beagle coming up for a sniff which makes it easier for handlers to approach people.

What makes LSD so difficult to detect?

LSD, or lysergic acid diethylamide, has no scent at all providing it is in its purest form and hasn’t come into contact with any other substances resulting in possible cross contamination.

LSD usually comes in liquid form, and this liquid is clear and completely odorless. This is why most police sniffer dogs will struggle to pick up the scent of LSD. The only time a dog may be able to track down acid tabs is if they have been specifically trained to detect the chemical impurities present.

So, even if a police sniffer dog isn’t specifically trained to track down LSD, it doesn’t mean that it won’t track it down. For example, an article from an Australian newspaper back in 2016 features the headline “Dogs sniff out LSD, MDMA, and cannabis.”

A casual reader who simply scans this headline may be inclined to believe that the dogs actually followed the scent of the LSD. But upon further inspection, this simply isn’t the case. The article goes on to state:

“During a search of the man, police found a sheet believed to contain 72 tabs of LSD, or acid… at the Pacific Hotel, a 25-year-old Yamba man was found to be in possession of 34 capsules of white powder, believed to be MDMA.”

It’s important to note that these sniffer dogs did not detect the LSD, but rather the array of other substances the suspect had in his possession.

Upon further reading, the article goes on to state that those particular police sniffer dogs had been trained to track down and retrieve MDMA, so it’s more than likely that this is what the dogs were alerted to, not the acid tabs.

When can police use sniffer dogs?

The Fourth Amendment protects a person’s right to be free from unreasonable search and seizure. One of the tools law enforcement most often uses in ways that potentially violate this right is that of the drug detection dog. 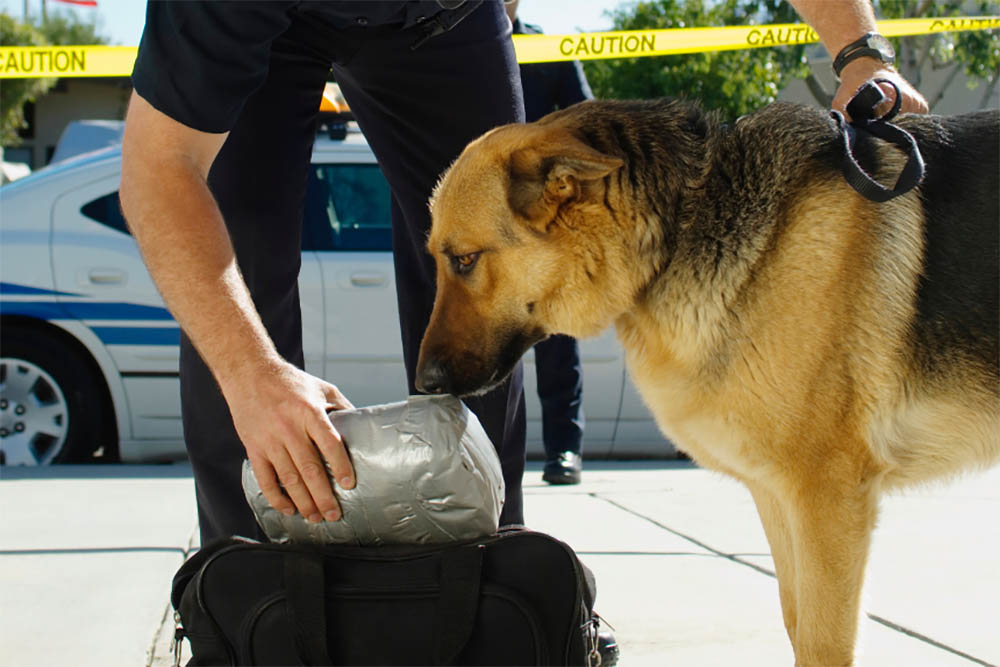 Drug dogs are a normal practice American police use to conduct searches and sniff out drugs and contraband. Normally, without emergency circumstances, an officer must have probable cause to search a person’s belongings, such as their car or house.

Drug dogs are used by law enforcement to provide that probable cause where none yet exists.

If police violate a person’s Fourth Amendment rights with a drug dog, a motion to suppress whatever evidence they discovered through the violation should be filed.

Can police sniffer dogs smell drugs inside you?

The short answer is probably yes, the smelling power of a dog is extremely impressive and they can often sniff out certain chemicals that are present in your sweat.

But in terms of a sniffer dog detecting a drug that is inside your stomach and submerged in the stomach acid- it’s unlikely. The human body is extremely complex and it’s safe to assume that the human would need to have consumed an insanely large amount of drugs for a dog to sniff it out in their stomach.