“Zoonotic” is the term used to describe a virus or illness that can be passed from one species of mammal to another. Fortunately, you differ a lot from your dog in terms of genetic makeup, so there are only a handful of illnesses that you can catch from him. This means it’s usually safe for you to look after your pets when they’re feeling under the weather, and it’ll probably make them feel much better!

In this article, we’ll take a look at how plausible catching a stomach virus from your dog really is, and guide you through how best to care for him and keep your whole household safe. Is also known as the common stomach flu. Although it has not been proven if animals and humans may pass on the norovirus to one another, the evidence given in this study is compelling enough to warrant some suspicion.

The research goes on to explain that the most effective way to prevent norovirus and other bugs from passing between you and your dog is by maintaining proper hygiene. This is especially important when stomach flu or another virus is already present in either a human or animal in the household. This is why it’s so important to wash your hands after playing fetch with your dog or if he licks you. 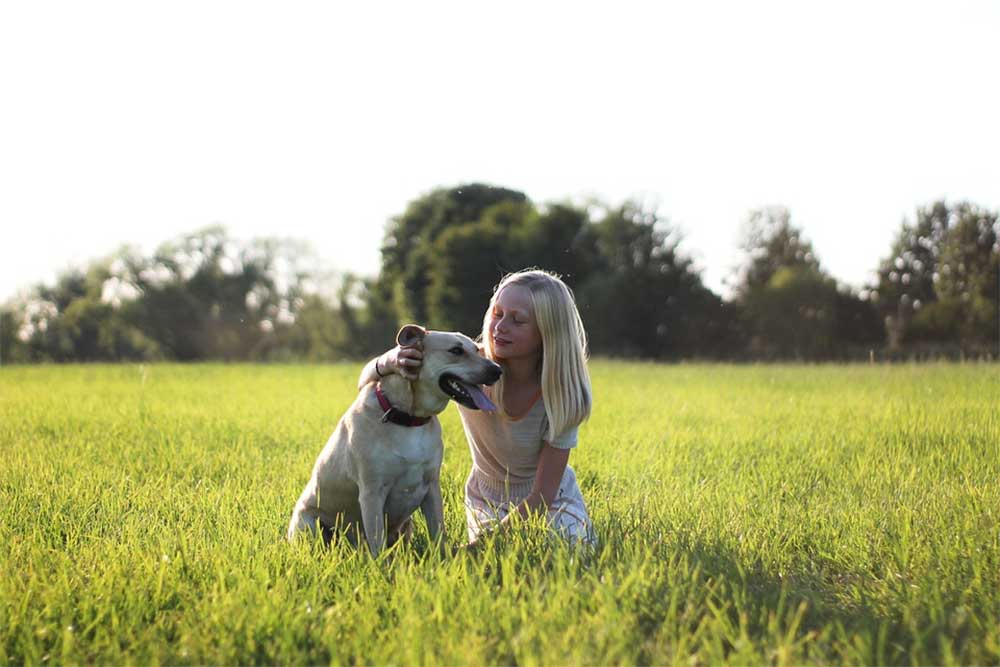 What illnesses can I catch from my dog?

There are a few illnesses and diseases that you might potentially contract from your dog, regardless of whether your dog seems to be ill or not, and it is a good idea to become aware of these and learn to recognise what symptoms to look out for.

Cryptosporidiosis is a parasitic condition that can be caught by drinking contaminated water. Because dogs are usually not afraid to drink from unclean ponds and pools, many of them carry the parasite within their bodies, whether they feel unwell or not. If it does make your dog sick, symptoms may include fever, weakness, vomiting, and diarrhoea, much as they do in humans.

Humans can become infected with the parasite through contact with contaminated water, canine faeces, or food that has been touched orally by an infected dog eating from it. Take care to properly wash your hands after bagging and disposing of your dog’s poop while out on a walk, and try to keep your dog away from unclean water sources in the first place.

Campylobacter coli and Campylobacter jejuni can both cause campylobacteriosis, an intestinal infection that can be contracted directly via ingesting contaminated canine faeces or indirectly by improper hand washing techniques. The illness will sometimes be present in a dog without really making them sick, and many dogs will flush out the bacterial strain through their feces, potentially infecting their owners. Cramps, nausea, and vomiting are common symptoms, as is bloody diarrhoea.

Roundworms, hookworms, and tapeworms are some of the most common intestinal worms that people can get from their dogs. This species of intestinal worm releases a huge number of eggs through the faeces of your dog, which can then infect the soil of your garden and other areas where your dog goes to the bathroom. This puts anyone who comes into contact with your dog at danger of getting worm eggs, and youngsters are frequently the most vulnerable to catching worms, even if they have not been in contact with a dog.

Hookworms are particularly dangerous since even walking barefoot over infected ground might result in infection. This is because hookworms can penetrate the skin in order to enter the body. This is one of the reasons why it is critical to pick up and properly dispose of your dog’s excrement to prevent it from infecting the soil and providing a health danger to people.

Obviously, you should avoid touching the faeces with your hands and wash your hands completely in hot, soapy water as soon as possible thereafter.

Salmonella is a bacteria that is frequently associated with food poisoning, which can be caused by either undercooked food or food that has been left out of the refrigerator before cooking. Salmonella is naturally present in a variety of substances, including various foods and animal bodies, and the bacteria does not normally multiply to the point where it might be harmful to health.

Because salmonella is commonly carried within the body of the dog, even if it is not making them ill or hurting them in any way, you can pick it up from them through a variety of means. Salmonella can be found in saliva, faeces, dishes, and even beds. Also, a salmonella infection can cause fever, diarrhoea, cramps, and overall discomfort. Again, basic hygiene standards and frequent hand washing can help to keep salmonella at bay in your household.

Can my sick dog make my other pets sick?

If you have more than one animal in your house, it’s important to note that there are several illnesses that dogs can pass onto a fellow pooch that shares the same house. Some of these illnesses include:

How to prevent the spread of stomach bugs: 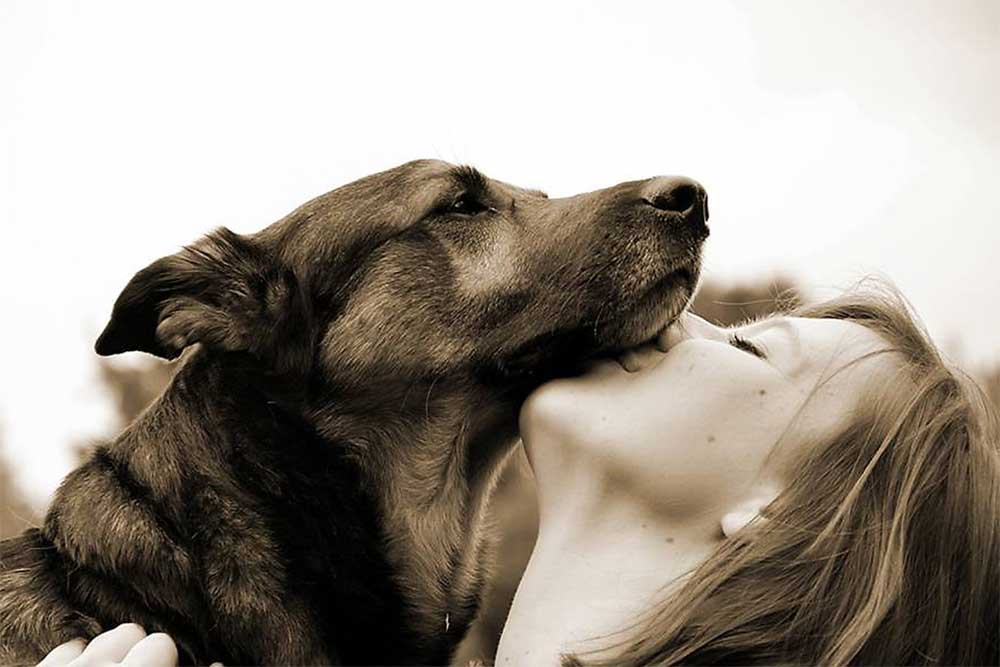 If you have multiple dogs in the home or if you have children, you probably don’t have much time to keep stopping to wash your hands. So, how can you keep your home as hygienic and clean as possible for you, your children, and your pets? Let’s take a look.

This one probably goes without saying, but the cleaner your house and garden are, the less likely your dog is to pick up a stomach bug. It’s best to keep the inside of your living space clean as well. This includes sleeping and playing areas for your dog. Infections can be spread when your dog rubs his rear on your carpet.

Although you may love receiving such affection from your dog, it has the potential to be harmful. Allowing your dog to kiss and lick you all over your face can cause health issues. So, do your best not to let them lick inside your mouth or up your nose. The majority of illnesses are spread by saliva.

There will always be germs in your home, no matter how hard you try to keep up with chores and cleaning duties.  When your children are in the garden or playing on the floor with your dog, keep a close eye on them. Kids adore kissing dogs and are constantly placing dirty fingers in their mouths. They’ll even join in on the fun when the dog is eating. These are all possible ways in which your children can contract a stomach illness from your dog.

How to look after a dog with a stomach virus:

Your dog will need to wait for the infection to pass through his or her body and then ride it out, potentially with medicine. As a pet owner, the treatment method will involve a visit to the vets. This is essential to ensure that your dog is always as well cared for as he possibly can be. The vet will likely prescribe treatment of no food or water for the next 12 hours. Do not feed your dog for 12 hours after their last episode, and if they vomit or have diarrhea, restart the 12-hour clock.

While this may seem cruel, it’s important to remember that it is not. Dogs are actually capable of fasting for several days, and it gives their stomach a chance to recover. When your dog is ready to eat again, keep things very bland and only provide small amounts of food. Once the vet has given you the all-clear to bring your dog home, make sure he or she gets lots of rest – it’s the only way they’ll be able to fight off any virus. Your dog will still need to go for walks for exercise, but don’t overdo it.

While it’s pretty unlikely that you’ll end up catching a stomach virus from your dog, that doesn’t mean that you should let your guard down. Doggy kisses on the face can be harmful, as dogs have the ability to infect humans with an array of other bugs.

The best way to prevent this and to keep everyone in your home safe, you should maintain good hygiene and always wash your hands after playing fetch!

link to What Types Of Dog Breeds Have Curly Tails?

Continue Reading
link to Can A Breeder Take A Dog Back?

The last thought that goes through anyone’s mind when they buy a puppy from a breeder is that they might have to, at some point, return the newest member of their family to its former home. And the...