Turtles are some of the most desired pets in the world due to their cuteness and longevity – but one of the most well-known kinds of the turtle is the Sea Turtle.

Sea Turtles are majestic creatures that live out in the wild, but many have often wondered if they can be kept as pets. 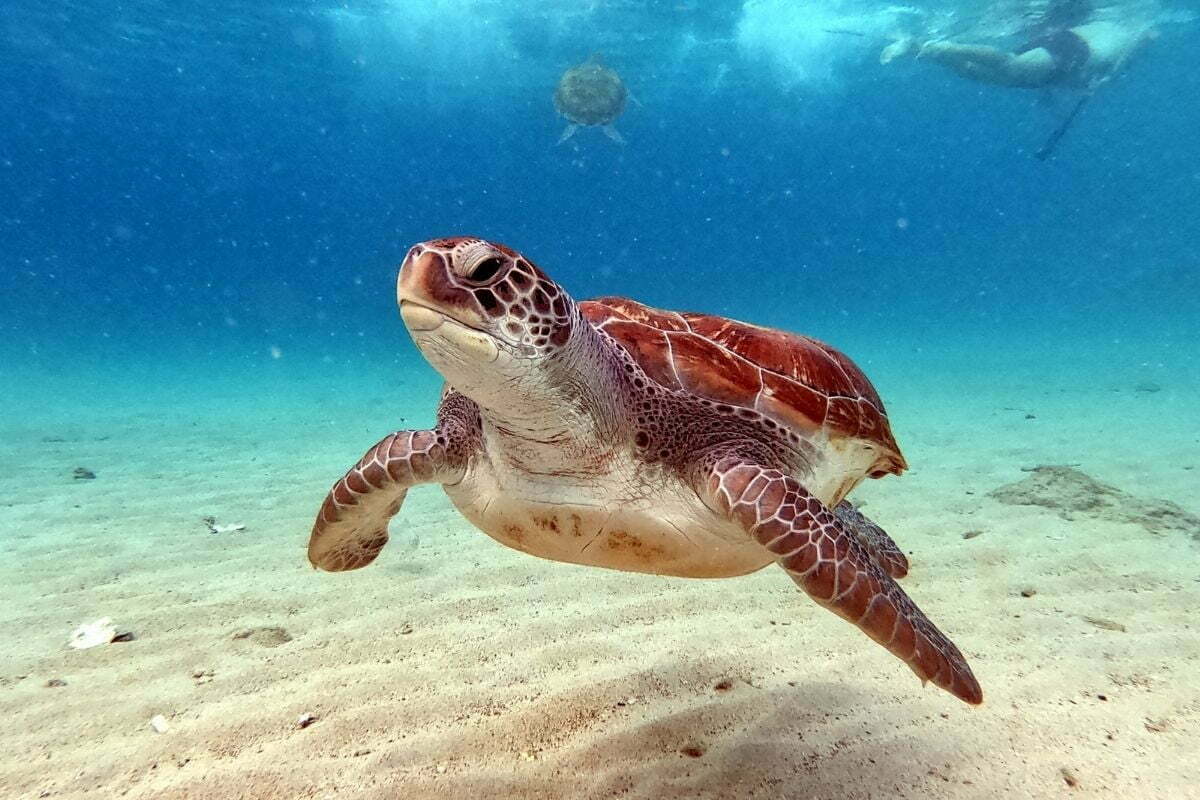 If you are wondering if you can own and love a Sea Turtle as your very own pet, then keep on reading – we are going to discuss Sea Turtles so you can find out everything you need to know about them. This way, you can learn if it is actually possible to keep a Sea Turtle as a pet!

What Are Sea Turtles?

Sea Turtles are some of the most iconic sea creatures in the world. They live in warm oceans around the globe, usually in tropical or subtropical waters, and swim for miles and miles.

There are actually seven different types of sub-species when it comes to Sea Turtles so they can be found in all kinds of shapes and sizes.

Each sub-species is unique and varies in shape, size, color, and diet. Some Sea Turtles like the Green Sea Turtle are herbivores and live off a diet of algae and seagrass.

Other turtles like the Hawksbill Sea Turtle use their beak-like mouths and strong jaws to crack open coral reefs to eat sea sponges.

However, jellyfish is the most popular part of a Sea Turtle’s diet. Sub-species like the Leatherback Sea Turtle and the Olive Ridley Sea Turtle eat jellyfish but often mistake plastic bags for their prey.

This means that a lot of Sea Turtles try to eat plastic bags and end up choking or blocking their intestines.

This is a huge issue because Sea Turtles are declining in population numbers and plastic is a huge contributor to this.

Can You Keep A Sea Turtle As A Pet?

No, it is not possible to keep a Sea Turtle as a pet for a number of different reasons. They are not like dogs or cats that have been properly socialized with humans and are wild creatures.

Although you may be tempted to try owning one as a kind of exotic pet, this will only harm the Sea Turtle in the long run.

So, let’s take a look at some reasons why you cannot (and should not) own a Sea Turtle and keep it as a pet.

Although many zoos will start-up breeding programs to try and help out endangered populations, this does not mean that you can help them out by owning them as a pet.

Sea Turtles are meant to live wild and free and keeping one in captivity can cause serious damage.

By keeping it in captivity as your own personal pet, you are actively damaging their numbers because Sea Turtles need to live wild and free in order to breed.

Breeding one in captivity is not as simple as breeding a pair of dogs – Sea Turtles are complex creatures and cannot be adequately handled by someone who has not researched them in immense detail.

They Can Be Dangerous And Make You Very Ill

This is a very little-known fact but Sea Turtles are actually carriers of Salmonella bacteria. This type of bacteria is very poisonous and dangerous to humans so if you try to keep one around as a pet, you only run the risk of making yourself seriously ill.

Salmonella is also very easily transferable, especially for children, who do not know how to handle them without proper hygiene restrictions.

Because of this, interacting with Sea Turtles is restricted and should only be done by professionals who know the proper measures to take to lower the risk of transfusion.

It’s also worth mentioning that Sea Turtles are not docile creatures. If they feel threatened, they will attack and their strong jaws and beaks mean that they have a very strong bite. They cannot be trained like other pets, so approaching one is not recommended.

Common injuries caused by Sea Turtles include broken bones and deep bites – so it’s best not to keep this animal in your backyard.

They Are Too Large

Like with many marine creatures, it is considered cruel to try and keep a Sea Turtle in captivity due to their size. Sea Turtles are not small by any means as they can grow to be between three and four feet long!

It is also impossible to replicate the right environment for a Sea Turtle in terms of salinity (the concentration of salt in the water) and this can cause serious health issues for the Sea Turtle.

Basically, it is impossible for you to make the right kind of home for a pet Sea Turtle. Trying to keep a Sea Turtle in a home that is not suited for them will cause serious stress, illness, and eventual death – which is not great for an endangered species.

This makes it very rare to find Sea Turtles anywhere in captivity in the world – including in zoos and aquariums. Not only is it difficult to give them the right kind of environment, but it’s also very expensive.

Due to all the issues above and especially because of the Sea Turtle’s endangered species status, it is actually illegal to own and keep a Sea Turtle as a pet.

The only way you are able to see a Sea Turtle in confinement is if they are unable to survive out at sea. This is especially the case in Florida where Sea Turtles are often injured by boats and jet skis.

Because an injured Sea Turtle is most likely to die if left in that condition, it is legal for you to take care of that Sea Turtle while they heal and recuperate.

However, once they are fully healed, you must release them back to the sea.

So really, you are not keeping the Sea Turtle as a ‘pet’ – you are just providing it with somewhere safe to stay until it can return to the wild.

The reason behind this exception to the rule is because of how Sea Turtles are endangered. Their numbers are declining and helping them stay alive and well is the top priority.

This means that if a Sea Turtle is injured, then you are allowed to help it in any way you can because that Sea Turtle can then go on to breed and improve the numbers of its species.

Can Baby Sea Turtles Be Kept As Pets? 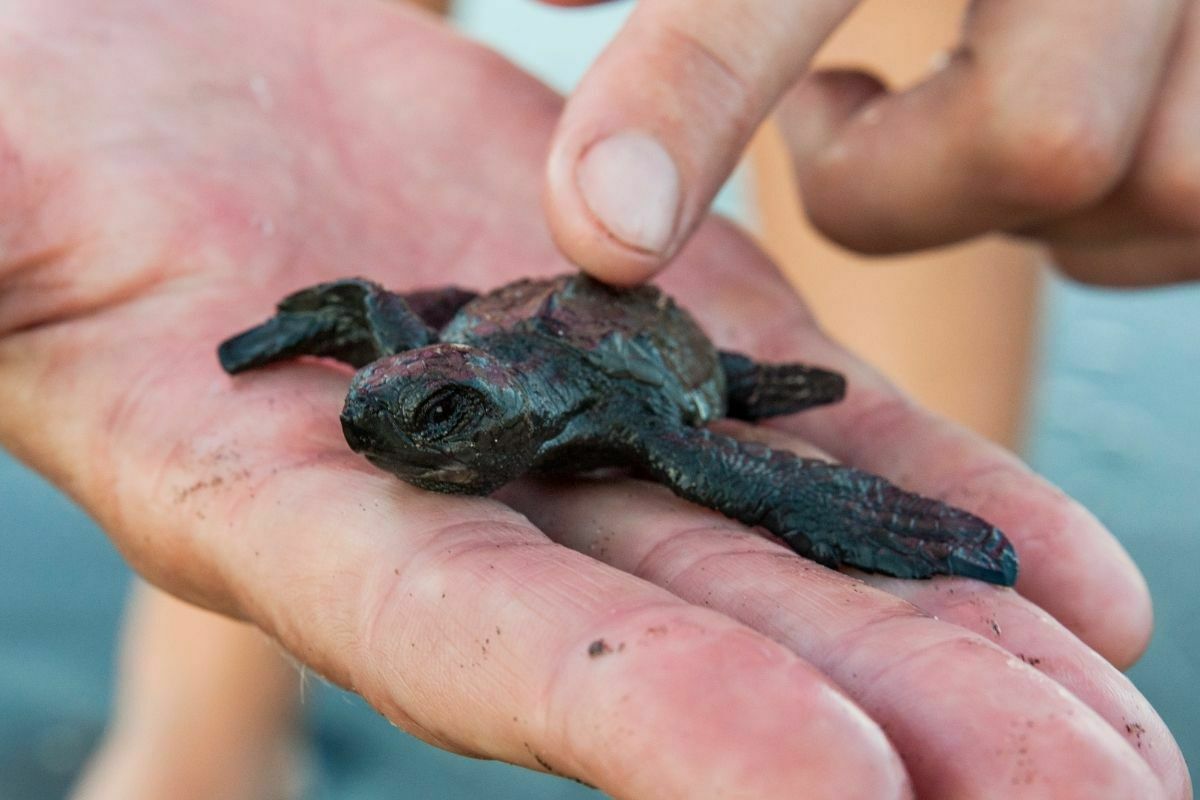 You may have looked at the above issues and wondered if a possible way around this is to keep a baby Sea Turtle as a pet instead. After all, they are much smaller and easier to fit in at home.

So – why can’t you just keep one for a few years until it gets too large and then you can release it to the ocean?

They are still endangered and need to live in the ocean in order for them to thrive and grow to become functional adults. Keeping them in captivity for their whole youth and then releasing them will make them unable to live in the wild and also cause a huge amount of stress.

If you find a baby Sea Turtle, just make sure it reaches the water – do not be tempted to take it home with you.

Although it is illegal to own a Sea Turtle as a pet, there are still other kinds of turtles and tortoises you can purchase instead. These creatures are usually bred for captivity and there will be lots of sources and equipment available for you to give them a happy home.

So, if you want to have a turtle as a pet – avoid Sea Turtles at all costs!