I love Taco Bell. Whenever I go there, I could get anything on the menu and be totally happy – Chris Massoglia

Taco Bell is a beloved American institution that feels like it’s always been there. It’s the old friend that you can turn to whenever the urge to feast on a Taco overpowers you, and you know that whatever other changes and twists and turns that life throws at you, the one thing that always remains the same, and will carry on doing things the way it always has, is Taco Bell.

With its sixtieth birthday looming large on the horizon, it might be getting slightly older, but that doesn’t mean that it’s going to slow down any time soon, as Taco Bell continues to serve more than two billion customers every year. 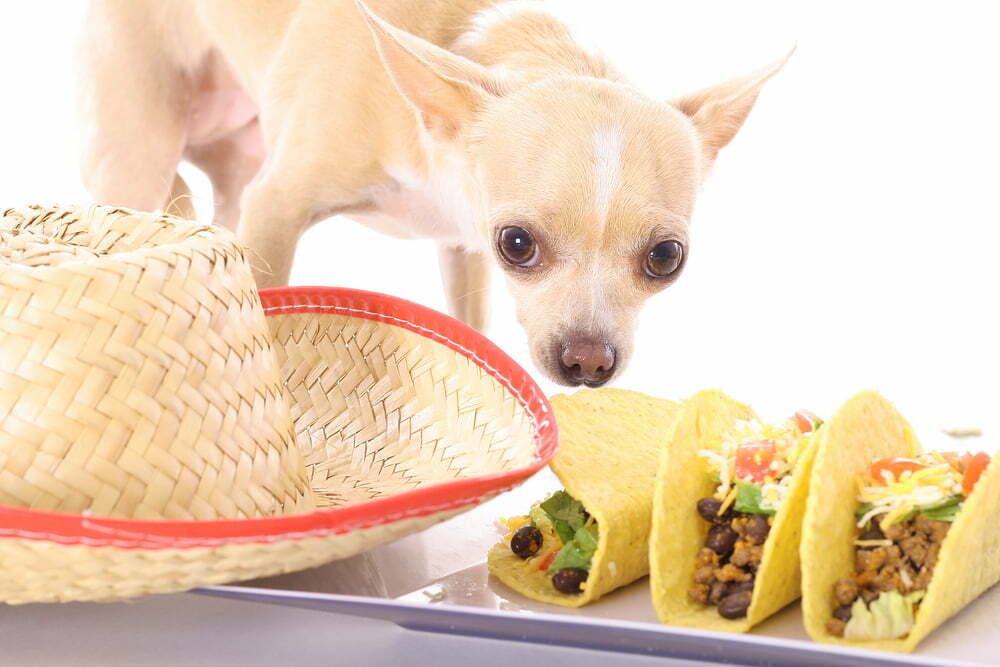 Okay, we admit it, we’re huge Taco Bell fans and there’s nothing that we like to do more than descend on our local restaurant, order everything on the menu and enjoy Taco Saturday the way it was meant to be enjoyed, at home with our family.

And that family includes our two Pitbulls, Dodge and Charger, who love Tacos even more than we do.

But just because our boys adore them and look forward to Taco Saturday’s as much as we do, it doesn’t mean that they should be eating Tacos, or allowed to indulge their passion for Taco Bell, as some of the ingredients that our favorite diner uses aren’t exactly dog friendly.

The truth is, we shouldn’t really let our dogs eat any fast food, because we know how bad it can be for us, and if a regular fast-food diet isn’t healthy for us, then it isn’t going to be healthy for our dogs either. But we understand why you might be tempted to let your dogs eat it, we really do.

They’re part of your family, and sometimes they want to eat the same things that you do, and it’s all too easy to give in to them when they stare up at you with those baleful pleading eyes.

And having discovered why we shouldn’t really let our boys eat Taco Bell, we’re going to share what we’ve learned about how dog-friendly the restaurant’s ingredients and food are, and what the consequences of letting your dog eat it could be with you.

Get ready, it’s going to be a bumpy ride and some of the things you’re about to learn might surprise you. It’s time to go through the Taco Bell looking glass…

Before we go into further detail and depth about why you shouldn’t feed your dog tacos or Taco Bell, we’re going to put you out of your misery and give you a quick overview of why tacos aren’t good for your dog, and it’s all due to their ingredients.

Dogs don’t cope well with dairy products and they can be a cause of dietary distress that ends in vomiting and diarrhea and as one of the ingredients that are used in a lot of tacos is cream, and as cream is a dairy product… Well, you can see where we’re going.

Then there are the onions, which are toxic to dogs, and the jalapeno peppers, which can also make a dog’s stomach flip flop in all kinds of gruesome ways, that are part and parcel of almost every taco that we’ve ever eaten.

Those two ingredients alone are enough to send tacos straight to the top of the things that dogs can’t eat list, but when you throw sour cream into the mix as well? That’s a recipe for doggie dietary disaster.

Okay, so now that’s we’ve taken a brief glimpse at why tacos shouldn’t be included on your dog’s everyday menu, we’re going to guide you through the other factors, and go into a little more depth about the ingredients we’ve already mentioned so that you’ll know exactly why you shouldn’t let your dogs eat tacos.

There’s More To Tacos Than Cream, Onions And Peppers

Admittedly, if you make the taco yourself, and feed a plain meat only version to your dog, then yes that wouldn’t be bad for him. But if you were to let him have a plain taco from Taco Bell, that wouldn’t be as good to, or for him.

The problem with the meat in Taco Bell tacos isn’t the meat, it’s the extra ingredients that they include in the meat to give it a little more flavor that are problematic for all dogs.

A journalist at Mashed decided to take a closer look at Taco Bell’s seasoned beef, the meat that they use in their tacos, and discovered that the primary ingredient is actually only eighty-eight percent meat.

The other twelve percent is made up of garlic powder, onion powder, sea salt, tomato powder, and chili peppers. It’s that twelve percent flavor factor that makes Taco Bell meat a problem for dogs.

We already know that jalapenos (chili peppers) don’t agree with dogs’ tummies and that onions are toxic to our four-legged friends, but the other two ingredients are just as bad for them as the peppers and onions are.

If you’re thinking that twelve percent doesn’t sound like a lot, unfortunately, there’s enough onion powder present in that twelve percent to make your dog nauseous, and when dogs get nauseous, more often than not they start vomiting. And who’ll be left to clean the dog puke up? That’s right, you will.

Let’s talk about the other two ingredients that taco bell includes in their meat, and we’ll explain why it isn’t just the onion powder and (chili) peppers that you have to worry about in that twelve percent. 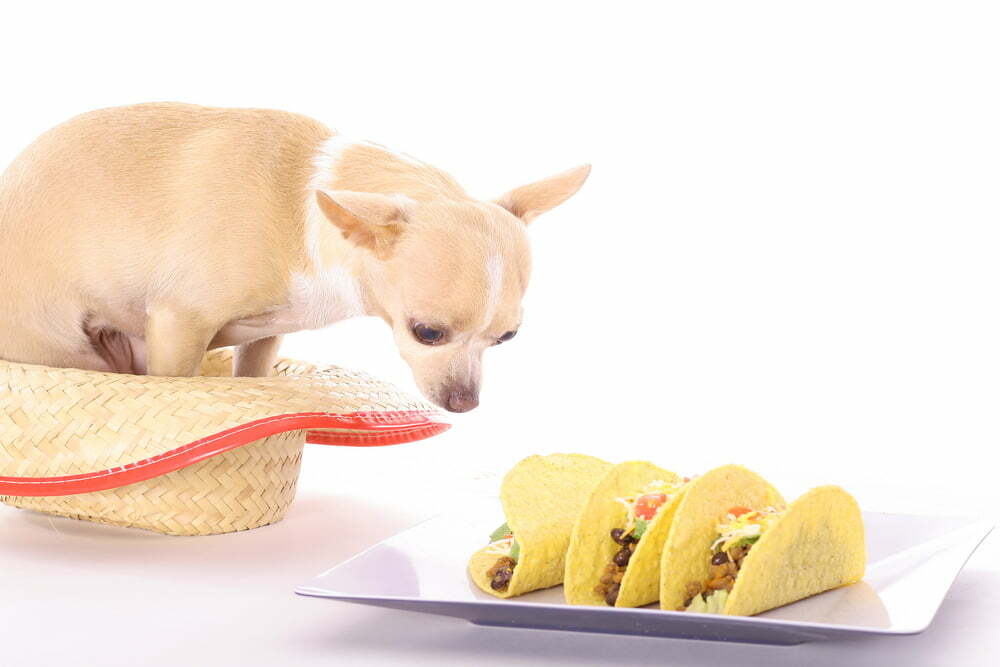 The only option then, as far as including taco’s in your boy’s weekly meal planner and making sure that he’s included in taco night, is to make them yourself.

But given what your dog can and can’t eat, any taco that they do have would be bland, and more a little boring and who wants a taco that’s just meat and a shell?

Even though he’d probably wolf his plain taco down, your dog might be a little puzzled about why his taco smelled and tasted is so different from the delicious tacos on your plate.

And, so that you’re not tempted to add a few other ingredients to your dog’s taco, we’re going to run the list of typical taco ingredients that you’d find in a Taco Bell taco and talk about what your dog can, and can’t eat on the list

Now that we’ve explained the canines’ do’s and don’t of tacos and why your dog shouldn’t eat Taco Bell tacos, we should probably take a look at what dogs can eat on a Taco Bell menu.

What Taco Bell Menu Items Can My Dog Eat?

Truthfully, after scrutinizing the Taco Bell menu in great detail, there isn’t a lot on it that’s healthy, or good for your dog.

It’s something that’s made even worse when you know that Taco Bell is actually a dog-friendly chain, and while they can’t allow dogs inside their restaurants for obvious hygienic reasons, they do encourage owners to sit and eat outside with their dogs.

You’ve probably thought that maybe burritos and enchiritos might be a good Taco Bell alternative for your dog, but as they use the same meat that their tacos do, we wouldn’t advise you to let your dog try either of them.

The only main menu item that’s actually safe for your dog is the Black Beans, but as they can have unfortunate intestinal side effects, whether or not you choose to feed them to your dog is entirely up to you.

The dessert menu is a different matter though, as there’s one item on it that our dogs love that while not being healthy for them, won’t do them any harm.

We are, of course, talking about the menu item that everyone adores, the cinnamon twist.

Pound For Pound – The Calorie Factor

We’re all, us and our dogs, prone to piling on the pounds if we don’t pay attention to what we eat, and a fast food diet is a sure-fire way to add inches to your waist and make sure that you need to buy a new wardrobe when summer arrives.

And unsurprisingly, Taco Bell’s menu is high in calorific content, which means that if you feed your boy Taco Bell’s tacos, don’t be surprised if he starts getting thicker around the middle.

The ideal calorie intake for a dog is measured slightly differently from the way it is for humans.

We run on the assumption that an adult human male needs around two thousand calories a day, whereas the daily calorie requirements for a dog are based solely on their weight.

As a single Taco Bell taco contains two hundred and twenty-five calories and a burrito has around five hundred calories, it’s easy to see how a dog could begin to get chunky if they ate at Taco Bell.

Three soft shell tacos contain enough calories to keep the average small dog on their feet and full of, pardon the pun, beans for an entire day.

If they sail past the three-taco limit, as it’s incredibly easy to do when you’re eating at Taco Bell, those additional calories can start to quickly add up.

When you put all the Taco Bell taco information together, there’s only one conclusion that you can reach about whether or not your dog can dine out at one of their restaurants.

They can’t, and if you do want tacos to be a part of your dog’s diet, make them for him. He might not thank you for it, but he’ll be a lot healthier and happier.