If you’ve never owned a chihuahua before now, then you’re probably staring at your new puppy in confusion regarding their cute yet floppy ears. There’s no need to worry, chihuahuas are actually born with floppy ears and they don’t begin to perk and stand up until they’re a couple of months old.

Their ears have a life of their own when they’re younger, some chihuahua’s ears may have already perked up by the time you bring them home, whereas some may have one floppy ear and one half perked ear.

This guide will tell you the average timescale it should take for your chihuahua puppy’s ears to stand up and is it a bad thing if they never get fully pointed like most chihuahuas?

So, when do chihuahua’s ears begin to stand up?

A chihuahua’s ears can begin to stand up anywhere from 5 to 15 weeks, although sometimes they may not even fully stand up until they are around 8 months. Their ears will not go up in sync and they’ll spend a lot of time with their ears at different positions until they’re both standing up straight.

Many chihuahua owners say that their dog’s ears don’t stop being floppy until they’ve finished teething, which is normally around the 6 month mark.

So there isn’t a definitive period of which your chihuahua’s ears should have perked up, so if the process is taking a bit longer for you then you shouldn’t worry as it can

Why are my chihuahua’s ears still floppy?

If your chi’s ears are still floppy and showing no signs of standing up yet, then it just means that your pup’s cartilage is not yet firm enough to stand erect as of right now. They might just be too young for this process but after a few months of having they’ll soon start to perk up a bit.

Sometimes chihuahua’s can have perky ears at only 5 to 6 weeks old, but by the time you’ve picked them up to take them home at 8 to 12 weeks, they might have started drooping over a little.

Chihuahua’s ears sometimes droop during the teething stage because their jaw muscles are working harder to chew their food whilst they’re starting to lose their puppy teeth.

The jaw muscles are connected to the ear muscles, so when the jaw muscles become tired from the teething process so do the ears, so there’s less energy to keep them perky. You shouldn’t worry though, as once the teething stage is over, their unique perky ears normally return to normal.

If you’re concerned about the lack of perkiness with your chihuahua’s ears then this could be linked to a poor diet or possible health conditions.

The puppy stage is a key stage in your chihuahua’s development and growth and if they don’t receive the right nutrition they could struggle with problems with their joints, skin, and their cartilage.

Make sure to buy high-quality food that comes from parts of the world that has high-quality control standards on their food, so you know all the ingredients inside are beneficial and not harmful for your lovely pooch.

Try to look for puppy food that is high in protein as this will aid the growth and development of the cartilage in their body, resulting in the iconic pointy chihuahua ears.

Moving a puppy to a new home after they’ve spent the first weeks with their mother and siblings can be very stressful for them.

Whilst it may be exciting for you, your puppy being moved to your home when they’re unfamiliar with their surroundings can be unsettling and they may feel stressed for the first weeks of being there.

On the other hand, some chihuahua’s will have perky ears when they’re at their most stressed because they’re on high alert and have high adrenaline levels to listen out for any danger. So it’s hard to say whether droopy ears are linked to either being stressed or relaxed in the home.

Regardless of this, you should try to make your puppy feel at home as much as you can, showering them with love and cuddles to make them feel safe. A happy puppy is a healthy puppy and you’ll soon see them grow along with their perky ears. 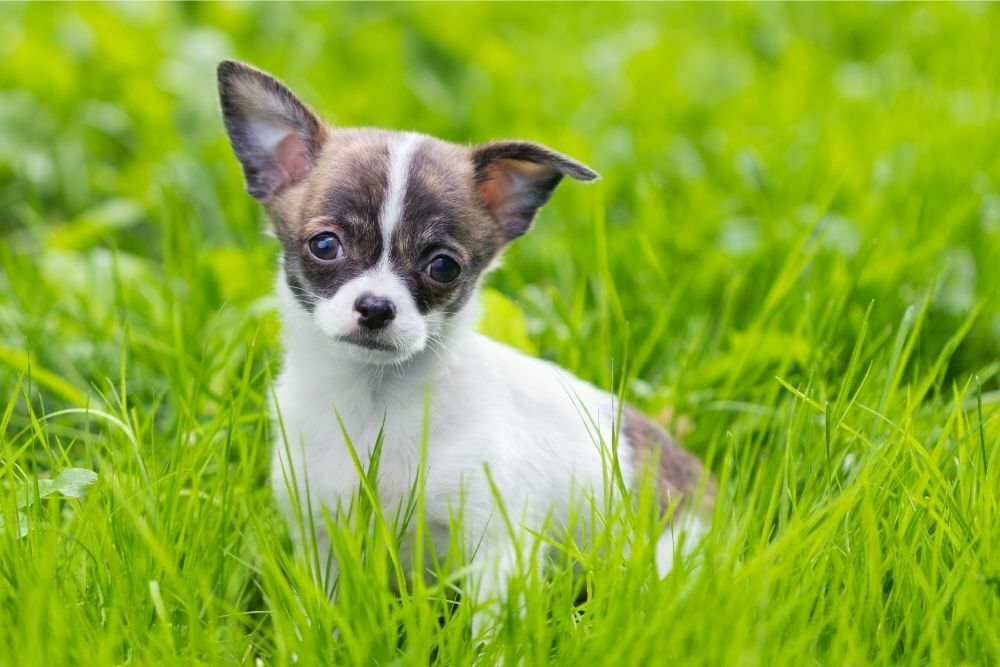 What if my chihuahua’s ears never perk up?

If your chi’s ears never happen to perk up, then it’s no big deal and they’ll still be healthy and happy with their floppy ears. There are no health problems that come with a chihuahua having floppy ears so you won’t have to worry if they don’t become erect in their adult life.

If your dog’s ears are floppy, then you’ll want to pay closer attention to them when you’re grooming or bathing them to make sure they’re nice and clean inside to prevent the buildup of dirt or the possibility of getting an infection.

Sometimes it’s in a chihuahua’s genes not to have perky ears and it gets passed on from the mother to her pups. If the one thing you love the most about chihuahuas is their pointy ears then you’ll want to pay a visit to the parents of your puppy to see if they naturally have pointy ears.

You can also discuss with the breeder to see if they’re aware that other family members of the puppy have pointy ears so you know your chances of your pup developing erect ears.

It’s Not a Pure Breed

If you’ve gotten to the six-month mark and your chihuahua is showing no signs of their ears perking up, then there could be a chance that they’re not fully or pure chihuahua and may be mixed with something else. This is common with rescue chihuahua’s as some shelters don’t know what kind of breed they are when they find them.

If you do know that the parents of your puppy are pure chihuahua’s then the gene of another breed could be there from further back in the dog family tree.

According to the American Kennel Club (AKC), chihuahuas must possess the pointy-eared trait to take part in professional dog competitions.

So if your dog’s ears don’t seem to be standing up, then there is a slim chance that you’ll be able to participate in them to win some awards.

Methods to help your Chihuahua’s ears stand up

If you’ve got your heart set on having a chihuahua with those unique pointy ears, then there are said to be some methods that you can try to encourage and help your dog’s ears to stand up.

We’ve never had to try any of these tips but have been recommended by chihuahua owners who we’ve come across in the past.

We can’t confirm if this is professional advice, so please confer with your vet before trying these on your chihuahua puppy.

1. Give Them Extra Calcium

When your pup is teething, they’ll be using most of their calcium intake to replenish and help their new adult teeth grow and strengthen.

Chihuahua owners have increased their dog’s calcium intake by giving them foods like cheese or milk in small doses throughout the week to help strengthen the cartilage in their ears so they stand up. We can’t confirm if this was the real reason why their ears finally stood up, but it’s worth a try.

However, don’t overdo it on the dairy as rich foods like this can upset your dog’s stomach, fatten them up quickly and they may start rejecting their regular puppy food because they enjoy the taste of their calcium treats instead.

One way to help encourage your chi’s ears to stand up on their own is taping them gently up so your dog will learn how their ears are meant to be. Gently is the keyword here as dog’s ears are sensitive and you don’t want to cause them any pain or distress.

You’ll want to tape the top of each ear to the base and then also connect the two ears so they stand up together. You should only try this for a maximum of 5 days (that’s if the tape stays on).

There you have it. You now know that a chihuahua’s ears can take anywhere up to 8 months to become fully erect and you don’t need to worry about them if they do take longer than you expect.

You also don’t need to be concerned if your chi’s ears perked up and then went floppy again, especially if it’s through teething as this is completely normal during their development stages.

Remember – chi’s are adorable little companions regardless of if they have floppy or pointy ears so don’t make it a major concern for yourself.