Contents hide
1 Signs that your chihuahua is pregnant
2 The pregnancy calendar of a chihuahua
3 Stages of a chihuahua’s Pregnancy
4 What is the heat cycle of a chihuahua?
5 Why do chihuahuas need C sections?
6 How to care for a pregnant chihuahua
7 Final Thoughts

If you have bred your chihuahua or they managed to escape when they were in heat, it is likely that you are now awaiting an impending pregnancy.

Pregnancy can be a rather challenging time for female chihuahua and because of this, they should never be bred when they are on their first heat because this can result in complications. Often a chihuahua will give birth by C-section.

Though pregnancy can present many risks to Chihuahuas, this doesn’t mean that there will always be a negative outcome.

You may now be wondering how many days and months your chihuahua is going to be pregnant. The gestational period in most dogs typically ranges from 50 to 68 days.

From the time Chihuahua’s conceive they are usually pregnant for 63 days before giving birth which is the equivalent of 9 weeks and just over 2 months.

Signs that your chihuahua is pregnant

If you have an inclination that your chihuahua is pregnant, you will likely be on the lookout for signs to confirm this. Pregnant chihuahuas typically tend to lose some of their energy and will often appear more tired than normal.

You may also notice that they seem to have lost their appetite and this sign is likely to be particularly noticeable during the earlier stages of pregnancy.

Another sign can be identified by their bellies. A chihuahua’s stomach can become stiff and enlarged fairly early on in pregnancy. It is also likely that they will have swollen nipples.

The pregnancy calendar of a chihuahua

A dog will experience three trimesters during its pregnancy, each of which will last for an estimated 21 days.

As their pregnancy progresses, you will need to make some changes to their diet and fitness regime to ensure that they are in optimal health ahead of the birth.

The first week of pregnancy accounts for the first 7 days. Because this is such an early stage, it is unlikely that you will notice any obvious signs of pregnancy so you can continue to feed and exercise them as you normally would.

As the pregnancy advances from 7 days to 14, you still will not be presented with hugely noticeable signs. It is at this stage that the cells have begun to develop as they move to the uterus.

You can continue to walk your chihuahua and feed her as normal and she may also have more energy than she did the previous week.

Your chihuahua has now been pregnant for between 14 to 21 days. At this point, hints of pregnancy will still not be hugely apparent, however, although small, the fetuses will begin to grow.

Some chihuahuas will show signs of an increased appetite, however, you should avoid feeding her any more than her daily meal intake.

As your chihuahua approaches almost a month of pregnancy, unfortunately, they are presented with the most risks. At this stage, this is a greater risk of your chihuahua miscarrying.

To reduce this risk, you will need to start making subtle changes to their lifestyle.

Begin by reducing the frequency of their exercise to ensure that there isn’t too much pressure on their bodies. You may also wish to consult your vet and ask them for advice on possible diet changes.

The pregnancy is now advancing and the fetuses are starting to look much more dog-like. An ultrasound will identify the exact number of puppies in the litter. You may also notice that she is eating more this week.

The puppies will now look very much like chihuahuas. Towards the end of this week, you should expect your chihuahua to begin nesting as they prepare for the upcoming birth.

At this point, it is also likely that the vet will want to check the health of the puppies.

Your chihuahua will now start making themselves comfortable within their nest. The birth isn’t very far away.

This is the final week of a chihuahua’s pregnancy so you should expect the litter to make an appearance at any point during this time.

A drop in her temperature will signify that she will soon be in labor.

Stages of a chihuahua’s Pregnancy 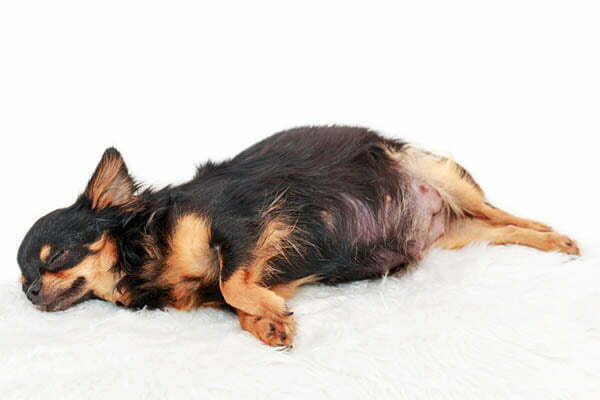 As mentioned previously, a chihuahua will experience 3 trimesters during their pregnancy, however, this is broken down further into 4 stages.

The first stage occurs when the dog is in heat and it is known as the Proestrus stage.

It will typically last for around 9 days, although some will go through this stage for longer. At this point, the male will begin to show interest in the female, although she will not return this interest to him.

You will also likely notice that there is some blood mixed in with their discharge.

The next stage is known as estrus and is when the female is fertile and responsive to the attention of the male and as a result, the mating will begin. Again, this is likely to take around 9 days.

Next is the diestrus stage and the time in which your chihuahua is pregnant. Because of this, you should expect this to be the longest stage of her reproductive cycle.

Finally, your chihuahua will go through the anestrus stage of the cycle.

Essentially, during this period your chihuahua will recover from the pregnancy and this also gives the uterus time to recover ahead of its next cycle and pregnancy.

What is the heat cycle of a chihuahua?

When a female chihuahua is in heat, they have entered the fertile stage of their reproductive cycle. For most dogs, this typically lasts for around 3 weeks and will then occur every 6 to 8 months.

It is worth noting, however, that the regularity at which a dog goes into heat can differ between dogs.

Some chihuahuas can go into their first heat cycle when they are as young as six months old, though others may be over a year old. In some instances, you may not notice that your chihuahua is in heat for the first few days of its cycle.

Several signs will indicate when your chihuahua is in heat. One of the most apparent signs is bloody discharge, however, you may also notice that they are urinating more regularly than normal.

Other signs can be identified through their behavior. Whilst some females will become more friendly, others may show some signs of aggression.

Why do chihuahuas need C sections?

Some but not all chihuahuas will need to have a C section and this tends to be the case for those carrying a smaller litter.

This is because they don’t have as many puppies in their womb so there is more room for them to grow and it is much more difficult for them to deliver larger puppies as they are only small themselves.

How to care for a pregnant chihuahua

It is important to ensure that you are sufficiently prepared for the birth of your chihuahua’s litter. As the expected due date draws nearer provide them with a comfortable area where they can begin nesting.

This must be safe and ideally, it should be quieter too. You must also ensure that your dog is accessing all of the nutrients that she requires because this will not only benefit her but the puppies too.

If you are unsure of the best type of food to give your chihuahua, you can enquire with a vet who will be able to impart their knowledge of the best options to you.

There are several signs that will indicate whether or not your chihuahua is pregnant. If they are, you should expect their pregnancy to follow a similar pattern to the pregnancy calendar that we have mentioned above.

If you do not want to risk an unplanned pregnancy, you must ensure that you are extremely cautious and aware of your dog’s whereabouts as they come into heat.