At first glance, you might wonder why people would want to know the answer to this question. However, in reality, there are a number of reasons why you might want to know how long it takes for a dog to decompose. 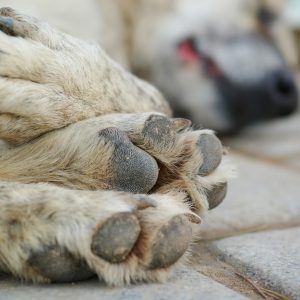 Maybe you can’t get your dog to a veterinarian for a few days after they’ve died, or perhaps you want to bury them in your backyard. You might be taking the death of your companion particularly hard and want to know everything about death in dogs to make yourself feel better and more at peace.

No matter what your reasoning is, we’re not here to judge. Instead, we’re here to help you learn what you want to know about how your dog will decompose, both underground and above ground. We’ll also take a look at the best way to bury them so that they aren’t disturbed by scavengers.

It takes a dog between six months and 18 years to completely decompose underground. When above ground, a dog will decompose much faster than surrounded by dirt. There are a number of factors affecting the decomposition rate, such as climate, depth, and how the body is prepared.

The Decomposition Process for Dogs

No matter whether you bury your dog or keep them above ground, the decomposition process is often very similar. There are five steps of the process, which we have listed below.

If you don’t want to know about dogs’ decomposition stages, skip this section altogether. It is quite graphic and might not be the best for people who have recently lost a dog to read about.

Between three and six hours after the death, the dog’s body will cool and enter rigor mortis. This is the same phase that every living being’s body enters after they die. The blood begins to drain from the body and pool at the bottom against the ground. Flies might begin to arrive to lay eggs and feed on the body.

During this stage, the body will begin to bloat due to the gases accumulating within the organs. The gases continue to increase, pushing liquids out of the dog’s body through its openings, such as the nostrils and anus.

These liquids will cause the body to smell, which will only worsen if you keep the body above ground.

Active decaying is the stage in which the dog’s body will appear to be much smaller than it was when they were alive due to all of the fluids being gone. Maggots will feed on the body thanks to the fly’s eggs that were laid in stage one.

The maggots will have all left the body by stage four. There is not much left of the body in terms of fat and muscle, although the hair and bones will still be evident. If you have left the dog above ground on grass, the grass around the body will also be dead now.

By step five, everything has decomposed aside from the bones, skin, and cartilage. These remains can now be taken and disposed of if you don’t want them in your yard anymore. If your dog was buried underground, these remains will stay buried forever.

When a dog is buried in dirt, there are a number of factors that can affect how quickly the body decomposes. One dog could decompose within a matter of months, while another will take years to fully decompose.

Below is a list of the factors that can affect the decomposition time when burying your dog underground:

In a normal climate, a dog buried without a coffin or blanket would take around six to twelve months to decompose. The deeper the dog is buried, the longer it will take for the dog to decompose. Plus, being buried in a coffin can prolong this process by up to 18 years. A blanket will slow the decomposition process, although it won’t take anywhere near 18 years. 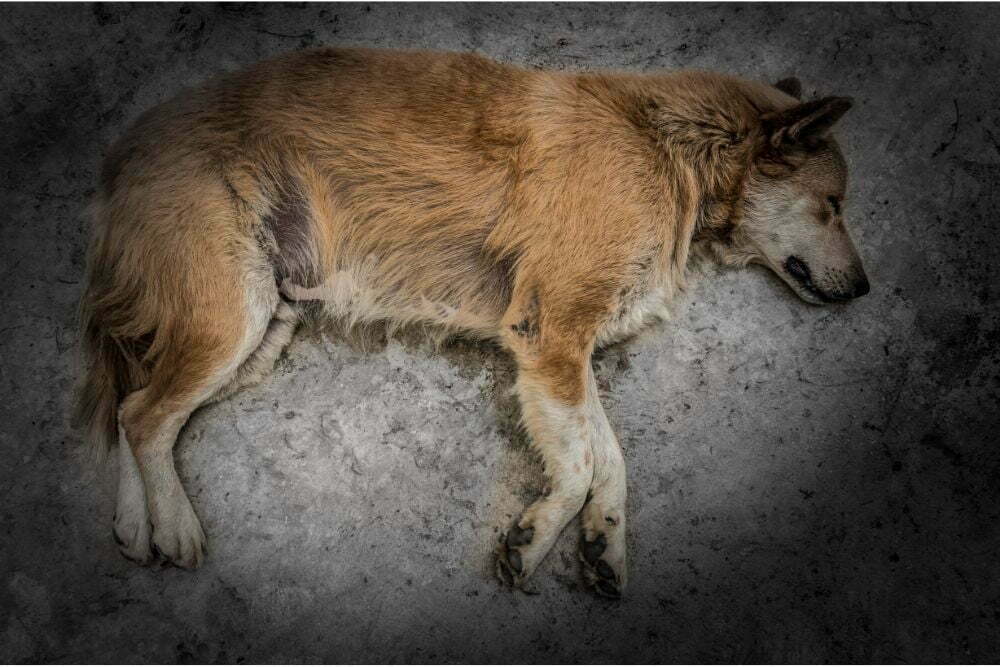 Keeping Your Dog Above Ground

Keeping your dog above ground once they’ve died will mean that the decomposition of their body will be very quick. This will take around one month to decompose fully in a normal climate. A cooler climate will prolong this process slightly, while a hotter environment will speed it up.

Dogs that have been kept above ground might also decompose quicker due to the help of scavengers picking at the corpse, as well as flies, maggots, and other vermin.

We will now answer some common questions that people have about the decomposition of dogs. When your dog dies, it can be difficult to know what you’re meant to do with them.

You can have them cremated for a dear cost, or you can bury them outside in your yard. Alternatively, you can keep them above ground to decompose if you’d prefer.

When should you bury your dog?

You can bury your dog whenever you want to, although waiting too long can leave you with troublesome issues. The process of rigor mortis begins in their dog’s body within three to six hours. Once this has started, you can determine that your dog is definitely dead.

Once you’re sure of this fact, you can bury your dog. Again, you can wait if you’re not quite ready to say goodbye yet. However, the sooner, the better, as a dead dog’s body can begin to smell and attract flies.

The body will also start to bloat and decompose before your very eyes, which can be distressing for the owners to see. If you want to keep your memories of your dog full of happy ones, bury them quickly.

Finally, waiting too long can make the body harder to move. You might find that it is difficult to pick them up once stage two or three has begun, making the whole process harder for you. The best time to bury your dog is within 24 hours.

Where should you bury your dog?

The best place to bury your dog is somewhere that they can be at peace without being disturbed. Don’t bury them near pipes, water sources, or flower beds that could be used in the future. If you don’t own your house and are thinking about moving soon, it might not be the best idea to bury your dog in your yard.

Otherwise, the new owners might disturb your dog when they move into the property. Plus, you won’t have your companion with you anymore. If you are thinking about moving soon after your dog dies, it might be better to consider cremating your dog’s remains. This will allow you to carry your dog with you wherever you end up next.

How deep should you bury your dog?

A dog should be buried at least two feet down in the ground. This will prevent them from being disturbed by scavengers and allow the body to decompose properly at a slow rate.

Soil mixed with sand will require a little more distance between the dog and the surface at three feet. You might think that digging further down is always better, but the further you dig, the more likely it is that you will hit a pipe or utility line.

Will a dead dog be dug up by other animals?

Scavenger animals, such as foxes, bears, badgers, vultures, and wolves, might want to dig up your dog’s grave to eat the meat.

However, no one wants to see their dog’s grave disrupted. To avoid this from happening, make sure that you dig the grave to at least two feet down into the earth.

To further protect them from scavenger animals, fill the grave back up with soil until you get to the last six inches. Fill the rest of this space with stones and rocks before covering these with another layer of soil. Place some more rocks or slabs over this to prevent scavenger animals from being able to dig down to your dog.

How long does it take for a dead dog to start smelling?

The amount of time it takes for your dog to begin smelling will depend on the environment that they’re in. If the weather is particularly hot when the dog dies, it might only take between 10 and 12 hours for the body to start smelling.

However, if the weather is cold, it might not start smelling until 24 hours after the death. This is because the cold climate can preserve the body and keep it fresher for longer.

Should you bury your dog in a coffin?

Coffins protect your dog and slow down the decomposition process when buried underground. However, they can be quite expensive. Ultimately, it is up to you whether you want to purchase a coffin for your dog or not.

Coffins offer another layer of protection for your dog to stop them from being dug up by scavenger animals. If you don’t want to buy an expensive coffin, you can also bury your dog in a blanket, towel, or cheap coffin made from cardboard, wicker, or wood.

As you can see, there is no simple answer to explain how long the decomposition process takes in dogs.

It can take as little as a month to 18 years. Keeping them above ground will reduce the time taken for them to decompose much more than burying them underground.

The environment you live in, your soil type, and the size of your dog are just a few of the factors that can affect the decomposition time.