Bearded Dragons are really interesting animals, they are known officially among zoologists as ‘Pagona’ which is a genus of six different but similar lizards.

A bearded dragon is differentiated from these lizards, and is known as a ‘bearded dragon’, because their neck or beard area puffs up and becomes black when they are stressed or threatened. 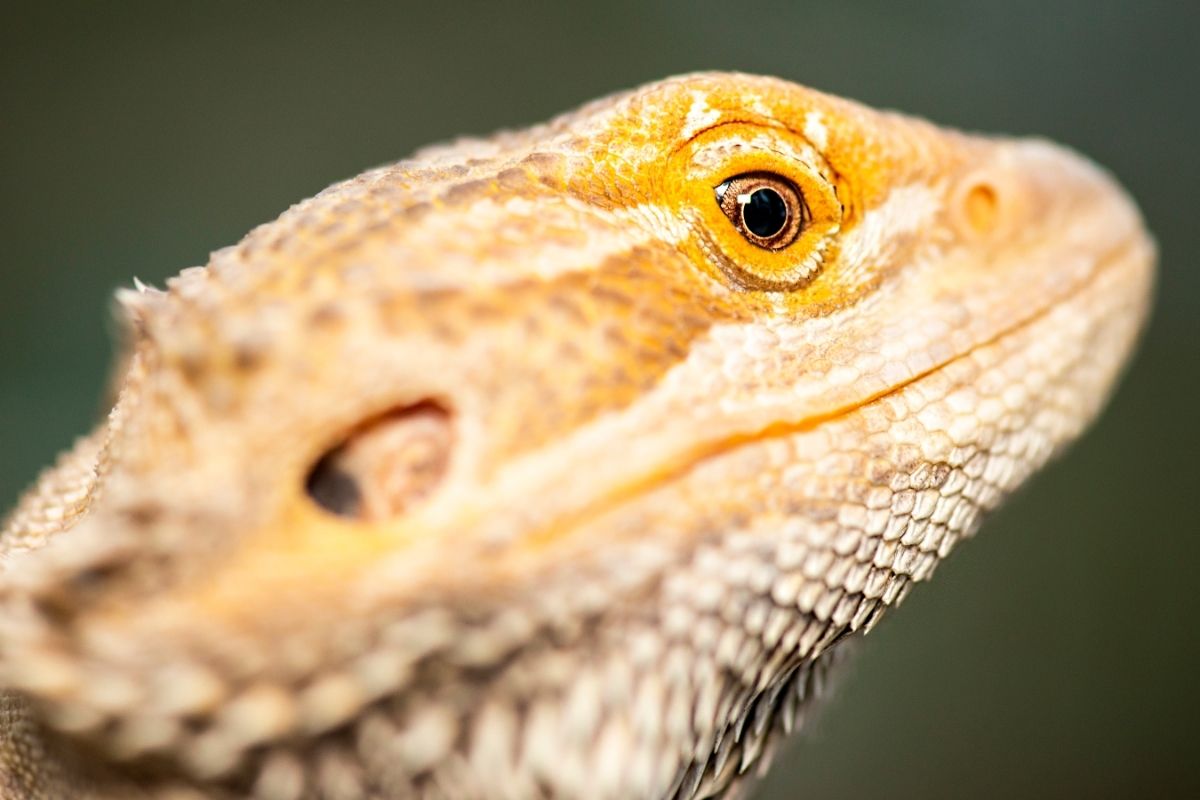 Looking after a bearded dragon is very demanding and requires knowledge of their specific and unique biology and behavior.

They are not animals that have evolved to be domesticated or captive like a dog or a cat, they are extremely unique to their environment and require extra care.

One thing many owners don’t realize and might help them explain certain behaviors is the mythologized third eye of the bearded dragon.

Do they really have a third eye? How would that affect their behavior? Let’s explore this together!

Does A Bearded Dragon Really Have A Third Eye?

If you have ever walked down the Sunset Strip in California, you will have undoubtedly heard someone talking about a third eye.

Humans often get obsessed with the concept of the third eye. Many people think it is a spiritual or esoteric thing, more of a metaphorical concept that could enhance our perception of things.

Rick Strassman, on the subject of esoteric and psychedelic matters, suggests that the third eye could potentially be what is called the pineal gland.

The pineal gland is located almost exactly between the eyes and is a small gland in your brain matter. The real purpose of the gland isn’t really known – making many think this is perhaps the third eye.

However, while this sounds like esoteric mumbo jumbo, this is actually true for bearded dragons. Yes, a bearded dragon does literally have a third eye.

This third eye is called a parietal eye or pineal eye, or even the pineal organ, as it connects directly to this part of the brain like many people imagine it would if it existed within a human.

The parietal eye has a lens and a retina just like a normal eye but no iris. It is hidden by a transparent scale in the middle of their eyes, you can see it if you really take a hard look.

Moreover, it is clearly evident if you look at the skull of a deceased bearded dragon.

Scientists theorize that at one stage some reptiles will have had four eyes, two for seeing like normal, and two that operate like a bearded dragon’s parietal eye.

They think that through evolutionary factors one eye will have moved to the middle forming this third eye.

What Is The Purpose Of The Third Eye?

No, your bearded dragon is not a mythical being that communicates with different dimensions, as its name may suggest, but, its parietal eye has a very specific but unique biological purpose that is used throughout its life.

Many tests have been completed on bearded dragons to unearth the true reasons why they may use this eye.

One clear reason, exposed by testing, suggests that the bearded dragon will use the eye almost as a compass to get back to their territory.

A little like cats, a bearded dragon has a territory or an area that it would call home. This area can expand like a cat would as they explore but they generally go back to one area to sleep, eat and mate.

A bearded dragon uses their parietal eye in order to find its way back to its territory.

This was proven in tests where researchers temporarily caught bearded dragons but discovered that once released they would return to the same area, their territory.

They enacted this same test but with three different groups of bearded dragons from different areas.

What occurred was that the second and third groups returned to their territory with no issue, the group who had their parietal eye covered wandered around for a long time unable to find their way back to their territory.

Don’t worry they all made it home safely after the tests were completed. Yet, what is clear from these tests is that they need the parietal eye in order to find this territory again.

This purpose likely evolved from predators who could attack the short bearded dragon from above.

So, the parietal eye allows the bearded dragon to sense shadows.

Yet, they can merely sense the shadow or ‘see’ it, they can’t necessarily tell what it is but it incites a primal flight or fight function, although almost always flight when the parietal eye picks up a shadow as the bearded dragon likely can’t deal with a threat from above. 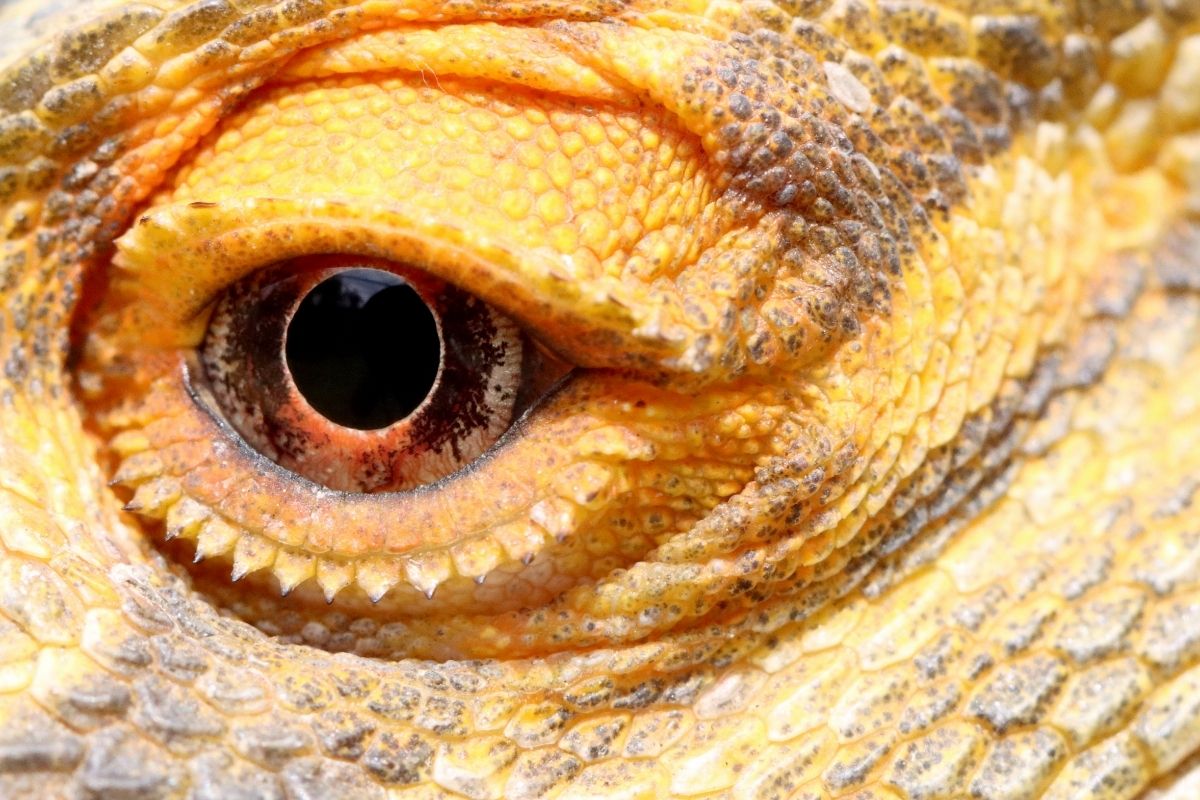 How Should This Change My Behavior With My Bearded Dragon?

You may not have known about the bearded dragon’s third eye, and now you might be wondering if there is anything you should change in how you act towards your beardie.

Firstly, many wonder if they have inadvertently hurt their bearded dragon by not knowing about this eye. They worry that patting them on the head might hurt their eye.

Although there is no need to worry about this happening, their eye is covered by a protective scale for these reasons, although stroking this area specifically may confuse them and make them uncomfortable as they detect the shadow of your hand.

One thing to be aware of is how you pick up your bearded dragon, you may have found this problem already.

For this reason, if you reach in to grab a bearded dragon from above they usually get very threatened and will scraper away pretty quickly.

As they are not used to or evolved for captivity, they simply think there is a predator coming in to grab them.

This should change how you consider what their pen should be like. They don’t like the sort of enclosure a fish would have or a snake which is deep and stops them getting out.

Instead, you should keep your bearded dragon in a large penned area that has a gate or a front door. This enables you to let the bearded dragon out when it wants rather than scaring it.

If your bearded dragon regularly turns black or puffs out their beard, then this could be one cause that is leading them to be stressed out.

You should also be aware what their actual normal eyes can see, this can also cause them to be stressed.

So in summary, bearded dragons do in fact have a third eye, which can be hard to believe for some but just look at a picture of their skull for the proof.

This eye is called a parietal eye or the pineal organ, it directly connects to their brain through a hole in the skull, truly amazing.

The parietal eye allows them to see shadows, which can act as a defense mechanism for animals which have an aerial or size advantage.

It is likely that there are perhaps more uses for the parietal eye than we realize, we’re not saying they have some spiritual connection with the shadow dimension, but the waves of evolution have likely kept this around for more reasons than one.

Interestingly, this can sort of be an interesting rebuttal to Strasman’s original claims about the human third eye.

The bearded dragon third eye seems to be in the exact place that Strassman imagined it would be in humans, an eye that connects directly to our brain.