Bearded dragons are a type of lizard that have become popular pets over the years. They are adorable and have a face that everyone loves.

However, if you’ve ever looked at one, or any other lizard, you might wonder – do they have ears? Well, they do! Of course, they aren’t like our ears or any other animal, but they’re there!

If you’re curious about bearded dragon ears (and why wouldn’t you be?), just keep reading. We’re going to be diving into the world of bearded dragons (more specifically, their ears). Interested? Let’s get into it.

So… Bearded Dragons Have Ears

As we mentioned, bearded dragons do have ears. They might have no external structure as we might expect, but if you looked really closely, you would see them!

Now you’re probably wondering what they look like. Well, they’re just little holes in the side of their head. If you didn’t spend some time staring at your reptile, you probably wouldn’t even notice them, so don’t feel bad.

Is Their Hearing Any Good?

A bearded dragon’s hearing is pretty good for their size. It’s actually quite similar to a human’s hearing – as long as the sound isn’t too loud, then they should hear it.

How Big Are These Ears?

The average size of a bearded dragon ear is around 0.5 millimeters wide. Ears can be larger or smaller, depending on the size of the reptile. However, they are not very noticeable unless the owner looks really hard.

Where Are Their Ears Located?

As we briefly mentioned, you can find the ears of a bearded dragon on the side of its head. If you were to look further back from their eyes,

you could probably see the little holes. To find these tiny ears, you could use this rule:

Trace a pathway halfway between your bearded dragon’s eyes and the corner of its mouth. The line will lead up to a small hole on either side of your dragon’s head. You found their ears!

If you looked closely, you may notice a sheer membrane that covers the openings. This membrane is referred to as the tympanic membrane and is simply part of the ear.

What Structure Do Their Ears Have?

The ear structure of a bearded dragon is basically the same as any other animal. Even though their ears look very different from the outside, the inside works the same.

The tympanic membrane even acts the same as it does in us, and other living things.

The tympanic membrane is part of the middle ear structure in most other creatures. It is the part of the ear that will vibrate as it perceives sound waves. When it vibrates, a message is sent out to the other parts of the ear.

Like other animals, bearded dragons also have tiny bones known as the stirrup or stapes. This is also a component of the middle ear structure.

It plays a key role in picking up on the sound waves that are sent from the aforementioned membrane.

Those sound waves are then transferred along into the cochlear duct, a duct that is full of fluid. Here, you would be able to find tiny hair-like structures that are referred to as cilia.

The cilia pick up on any vibrations that come through. Directly past the cilia, the sound waves will finally reach the brain through the auditory nerve.

If you know anything about the anatomy of ears, including your own, you would realize that the setup is exactly the same! At least that means it’ll be easy for you to remember if you feel like you need to.

The Purpose Of The Ears

The ears of any living thing play an important role in daily lives. For bearded dragons, ears play two key roles. You will notice that these key roles are the same for us, too!

Obviously, one of the main points of having ears is to hear. Even for bearded dragons, hearing is important, as it allows them to hear what is going on in the world around them.

Of course, if you had a pet lizard, you’d want to make sure that it was safe. However, they need to have ears to know what is happening around them, and to know when they should run.

The ears are pretty amazing, for all living things. These little organs help our lizards avoid getting hurt by making sure they can sense danger coming toward them.

This includes dangers such as loud noises and potential bites from dangerous animals. Although bearded dragons have very good eyesight, there is a good chance that you would hear something long before you saw it.

Any biology lesson on the uses of the ears would have taught you that hearing isn’t the only purpose of ears. Balance is also incredibly important! It might sound weird, but our ability to balance comes from our ears.

The same goes for bearded dragons and just about every other animal in the world.

Bearded dragons need to have good balance because they live in places where they can fall off rocks and branches.

If they don’t have a good balance, they could get injured. Injury can be expensive, and very problematic, so if you ever notice that your bearded dragon can’t seem to stay balanced, call the vet.

Okay, so bearded dragons have ears, but do you need to clean them? If you look at your dragon’s ears, you might wonder how you would even begin to do that, but don’t worry!

You actually should not try to clean your bearded dragon’s ears. Sometimes, it pays off to not interfere with nature, and this is one of those times.

In a bearded dragon’s natural habitat, they would frequently get tiny bits of debris in their ears. Since they naturally occur in sandy environments, you can imagine what would happen.

Luckily, these reptiles have built-in defense mechanisms that mean you do not have to get involved. Any tiny foreign bodies that do manage to work their way into the dragon’s ear won’t cause any harm.

So, it is never recommended to try to clean your bearded dragon’s ears. If you did try, you would likely end up doing a lot more harm than good.

Ears are so sensitive to any creature that they are best dealt with by leaving them alone. One wrong move and you could do some serious damage, even without intending to.

If you ever do get worried about your bearded dragon’s ears, the best thing you can do is schedule an appointment with the vet. It’s much better to leave the issue up to the professionals.

There’s a very good chance that they have had to deal with reptiles and their odd little ears many times.

Bearded dragons do have ears! Now that you know this, how do you feel about them? They can hear you, and everything else in their environment, too.

With this in mind, it is very important to keep bearded dragons in a place that isn’t too noisy. No one wants to be in a room where there are constantly loud or unpleasant noises, and your bearded dragon is no different.

An uncomfortable or stressed bearded dragon is likely to hide away, so if you notice your pet doing this, think about the surrounding noise!

Do Bearded Dragons Have Ears?

Reptiles like bearded dragons have internal ears. This means that when you look at the top of their head, you

will see two openings instead of actual external ears. These openings allow sounds to enter the lizard’s ear canal. 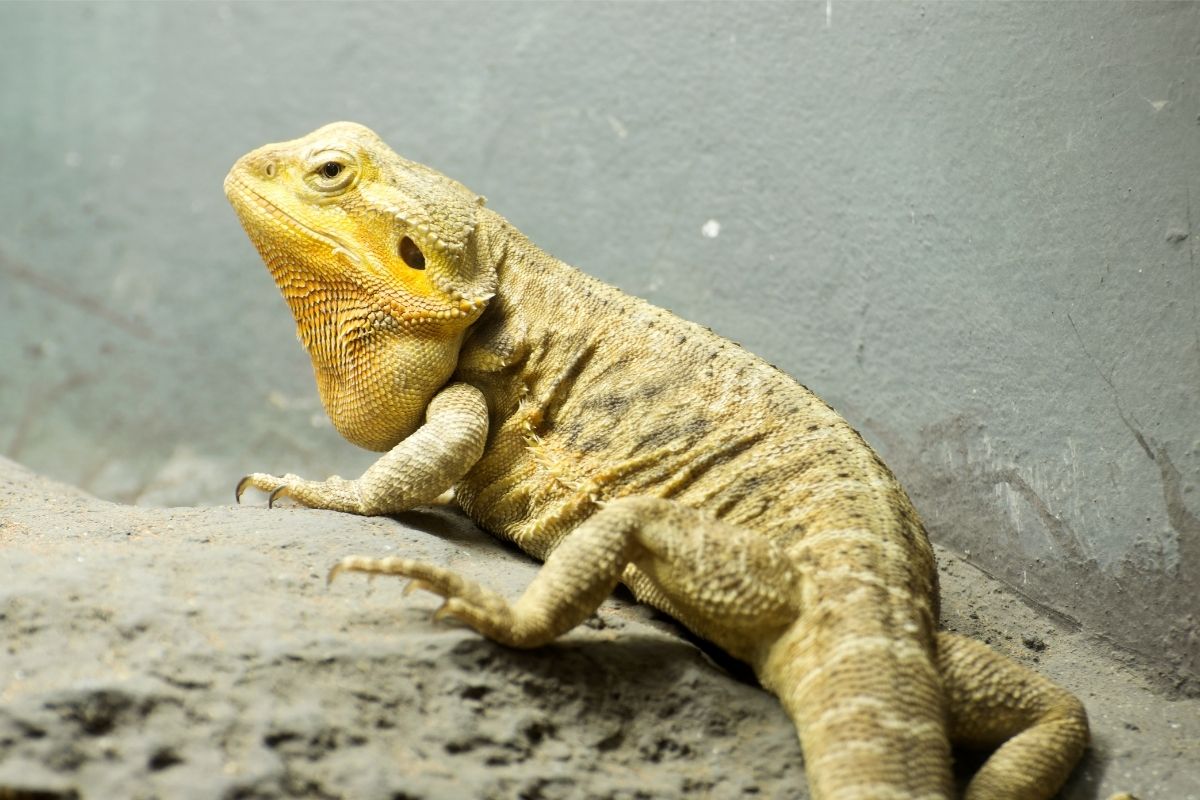 This depends on the individual lizard. Most reptiles are able to hear certain frequencies very well, while others aren’t as keen.

As for bearded dragons specifically, there really isn’t a way to tell which ones are better or worse. The only way to know for sure is to test them.

Do Bearded Dragons Get Ear infections?

Yes, bearded dragons can get ear infections. These infections are usually the result of fungal or bacterial infections.

Should My Bearded Dragon Have A Heat Lamp?

Yes, your bearded dragon should have a heat lamp, especially if they live in a cold area. Heat lamps help regulate the temperature inside your lizard’s enclosure, and prevent overheating.

If you don’t give your reptile adequate amounts of sunlight, then you need to provide additional light sources. A heat lamp is an ideal solution.

While little research has been done on the topic, we assume that baby lizards can hear as well as their older counterparts.

No, bearded dragons are definitely not blind. They have eyesight, just like us. However, because of their small size, they cannot see objects from very far away.

Yes, bearded dragons are intelligent. They are smart enough to learn what they need to know and develop into mature adults.

As long as they have a safe and healthy environment to grow up in, then they can succeed. It is believed that bearded dragons are pretty smart creatures!

What Is The Bearded Dragon’s Internal Ear Structure?

Their internal ear structure is much the same as humans and any other animal. They have the tympanic membrane, stirrup, and cochlear duct. Sound waves move through the ear and eventually reach the brain, where it is processed.

Are Ear Infections Common In Dragons?

No, ear infections are not considered to be common in bearded dragons. They are more likely to get an infection if they are kept in poor conditions.

For example, bearded dragons are prone to getting ear infections if they spend time in cages with dirty floors.

How Big Do Bearded Dragons Grow?

Bearded dragons grow larger than most other types of reptiles. Depending on the species, they can grow anywhere between 1-2 in length. Males generally tend to be slightly shorter than females.

Should I Clean My Dragon’s Ears?

No, you should never clean your dragon’s ears. If you are concerned with your bearded dragon’s hearing, you should take them to the vet for a checkup. You could harm your pet if you attempt to clean their ears yourself.

Where Do Bearded Dragons Originate From?

These reptiles come from Southern Australia. They can live in deserts and lush grassland.