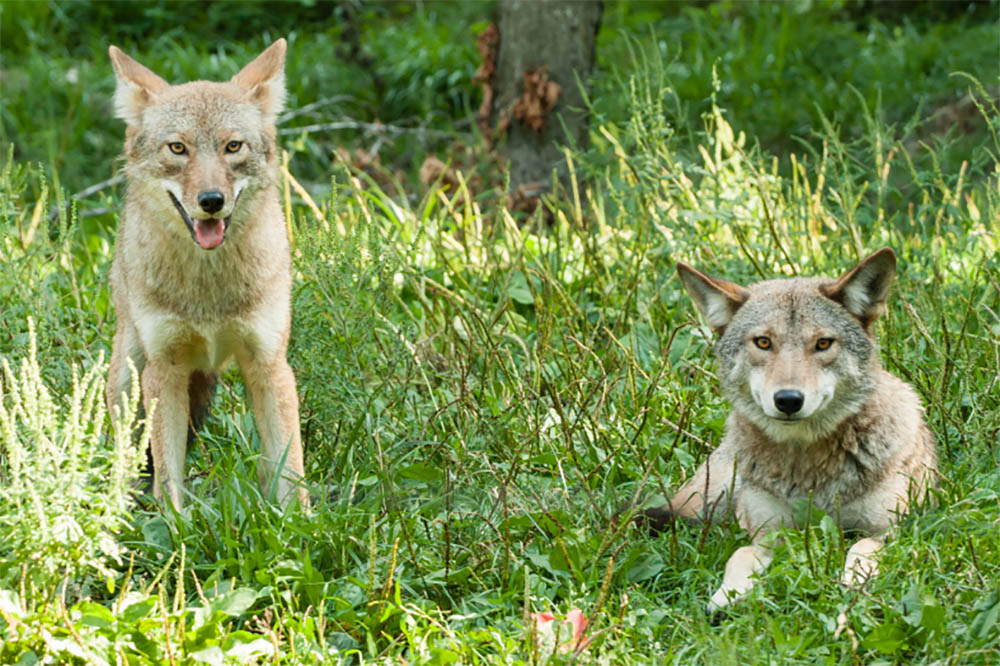 Can dogs mate with coyotes?

Yes, dogs can indeed mate with coyotes. In fact, the resulting offspring of a dog and coyote partnership is very cute and is known as a coydog or dogote, depending on whether it is the dog or coyote that gives birth.

However, this is actually relatively rare in modern times. The reason for this is that the majority of coyotes are wild, whereas dogs are generally tame due to being family pets.

It used to be much more of a common occurrence. It is thought that coydogs were bred commonly in Mexico (Pre-Columbian Mexico, to be exact).

With this in mind, it is in the city of Teotihuacan that these coydogs were more likely to be found. The reason for this is because the people in this city were thought to have desired characteristics from both a coyote and dog.

They used to try to breed dogs with wolves, too. The resulting offspring were loyal guard dogs that were resistant and resilient. This made them good protectors.

It is actually thought that the pairing of coyotes with dogs happened before this, as there is evidence that dogs were brought over the Bering Land Bridge (between Chukotka and Alaska) around 14,000 years ago.

This accounts for the darker colored coats of some coyotes.

Coydogs and dogotes respectively are both types of canid hybrids. What we mean by canid hybrids is that they are a result of interbreeding between different species in the overarching group of animals known as the genus Canis.

As such, it has also been found that other types of hybrids have existed. As we have said, wolf dog hybrids exist. However, there are also dingo and dog hybrids, jackal and dog hybrids, and even hybrids between coyotes and wolves (coywolves).

It must be noted here that sometimes it has been known for people to confuse coydogs (and dogotes) with coywolves, and vice versa.

It is actually more common to come across coyote and wolf hybrids in the wild than it is to come across a dogote or coydog. It can also be difficult to prove either way, at least without a DNA test.

Can a dog get pregnant by a coyote?

Yes! A dog can get pregnant by a coyote. This is what is known as a coydog. A male coyote would need to mate with a female dog for this to happen.

The offspring would likely survive and grow up to full maturity. They will also feed off the female dog in the same way as a pure dog litter would.

The scientific reason for why coyotes can impregnate a dog is because they are related, and so in a biological sense, they are capable of reproducing together.

However, as we mentioned in the previous section, just because it is possible does not mean that it is common.

One of the main reasons for this is that dogs and coyotes do not generally live in the same habitat or environment. Most of the time, dogs are kept as family pets.

Of course, there are wild dogs that exist, as well as dogs that were previously kept as pets but have since escaped and live in the wild, but in general, they do not live in the wild as coyotes do. This means that coyotes and dogs may not interact often.

That being said, there have been instances where fa mily dogs have come into contact with coyotes on walks, or if a coyote ventures into the yard of a dog. This may, in theory, lead to breeding.

This does not mean that it hasn’t happened. In fact, there have even been instances where a male dog has impregnated a female coyote (resulting in the dogote).

Again, cases are few and far between but not unheard of. All in all, a dog can get pregnant by a coyote, as well as a coyote getting pregnant by a dog, but these days the occurrences are rare.

You would be more likely to find other types of canid hybrids such as wolves crossed with coyotes in the wild.

What month do coyotes mate?

Coyotes tend to mate at certain times of the year. The window for mating in a coyote is relatively small, and it only happens once a year. Coyote mating season is between late January and late March.

Of course, different coyotes will have slightly different periods of ‘heat’ with the peak for female coyote heat being around late February and early March.

Each coyote will only be in ‘heat’ for around 2 to 5 days. This means that they are only able to get pregnant during this very short time frame.

It is worth noting that whilst this is typically the case, coyote pregnancies can happen outside the peak period and even outside the typical mating period of January to March.

However, this is rare. This is in contrast with the mating habits of dogs. Dogs can have a number of periods of heat during a year, and therefore will have a little bit more of an opportunity for mating and pregnancy.

Keep in mind that if a female coyote does manage to get pregnant during her annual eat period, the gestation period she will experience can be anywhere from 58 to 63 days.

After this time she will likely have a litter of coyote pups to tend to.