Many people love to have snakes as pets. They’re cool, they have vibrant colors, and often provide a touch of personality and character to each individual reptile.

Because of this, many people love to call these pets their friends and will love to bond with and look after these creatures.

However, many people can be under prepared when they come around to actually purchasing these animals for their homes. 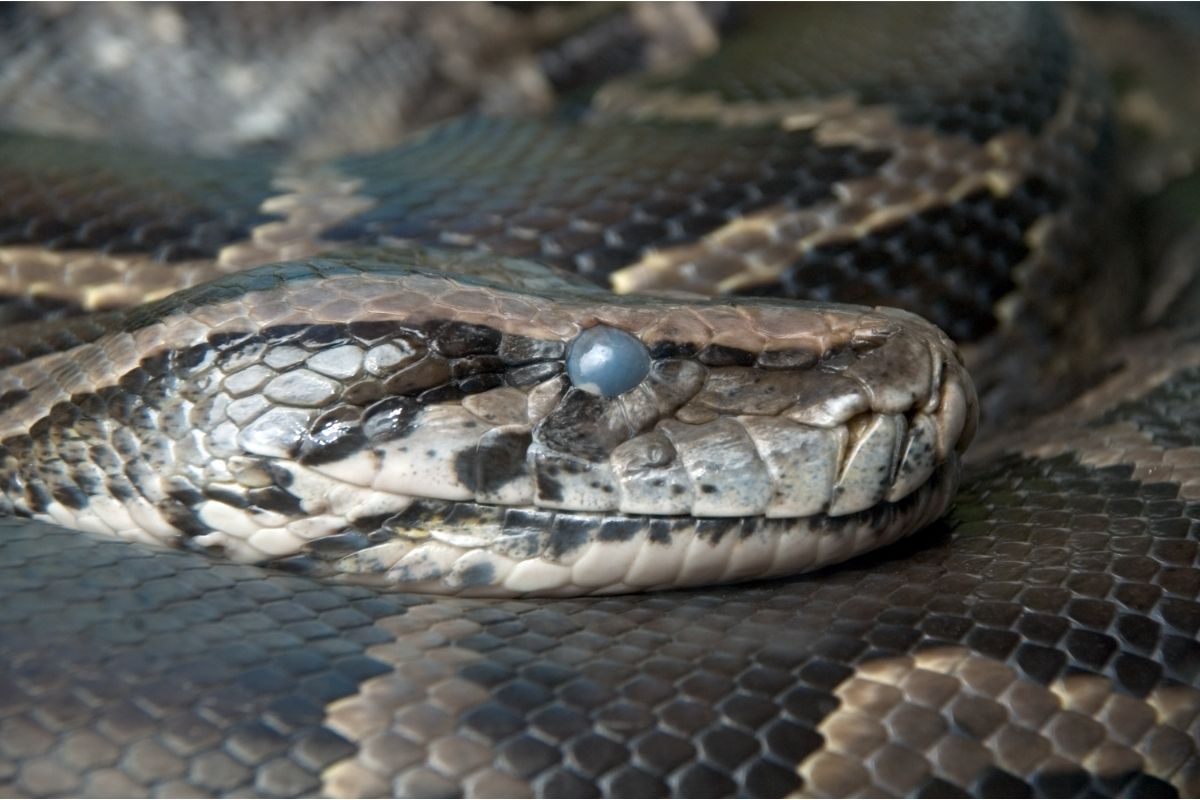 Lots of people often wonder if snakes need sleep and whether they hibernate like a lot of their reptile counterparts.

Follow our guide to find out whether they do, the benefits of snakes getting sleep, and how long they hibernate for if they hibernate.

Hopefully, by the end of this guide, you’ll be better prepared for handling a snake of your own.

What Are Snakes? A Brief Insight

Before we go any further, it’s important that we first take a quick moment to understand what exactly are snakes.

In short, snakes are reptiles that are cold-blooded, meaning that they don’t have a very high body temperature.

This is different from mammals such as cats or dogs who have warm bodies in order to keep them comfortable.

Snakes also possess a unique set of characteristics. For example, they don’t have vocal cords, making it difficult for them to communicate with one another.

Instead, they rely on pheromones and other non-verbal signals to determine if someone is a friend or foe. Also, because they lack eyelids, they cannot close their eyes while sleeping.

Many people might assume that all reptiles only rest during the night, but this couldn’t be further from the truth.

There are a variety of reptiles that can be found throughout the world, including lizards, turtles, crocodiles, and alligators, among others.

These creatures may not necessarily sleep at night, but they still require some form of rest time.

For instance, some lizards are known to spend most of their day asleep, only waking up to eat and drink. The reason they need to sleep so much is due to the fact that a lot of them are nocturnal creatures and only come out at night.

During the daytime, they prefer to stay in their burrows where they feel safe and secure.

However, once the sun goes down, they begin to emerge and explore their environment. When doing so, they use scent glands located near their nostrils and their tongues to explore and search for food or potential threats.

As soon as they smell something, they immediately retreat back into their burrow or move in to attack. Although they may not sleep during the day, they do need some form of restful downtime.

Now that you know about the types of reptiles that sleep, let’s talk about snakes, specifically. Unlike lizards and other reptiles, snakes are diurnal creatures.

That means that they only wake up during the day to hunt or feed. During the night, they typically retreat back to their dens or burrows and will conserve their energy for the next adventure.

When resting during the day, they tend to remain motionless. This allows them to conserve energy and conserve water. If they aren’t moving, they won’t consume as much as an animal would who is constantly on the run.

They also spend a lot of energy on heat regulation, meaning that they have to find time to conserve this energy as heat regulation is an ongoing process.

It’s no secret that a lot of reptiles, like tortoises, will hibernate. However, do snakes hibernate?

Yes, they do! Like many animals, snakes will enter a state of suspended animation when temperatures drop below certain levels.

At these times, they will slow down their metabolism and stop consuming food. This way, they can save energy and conserve water.

How Long Does It Take For A Snake To Hibernate?

It depends on the type of snake. Some species will hibernate within a few days whereas others may take weeks or even months to complete the process.

To make matters worse, the length of time it takes to hibernate varies based on the weather conditions.

Additionally, it can vary depending on how old they are. In general, younger snakes will go through this process quicker than older ones.

Many people might not have heard of a process called brumation, which occurs when snakes need to save their energy and will need some well-deserved rest.

Brumation is a term used by biologists to describe what happens when a snake needs to conserve its energy and needs sleep. This is different from hibernation because instead of slowing down the metabolic rate, they basically shut down completely.

Once they enter this state of dormancy, they don’t consume any food, and they don’t produce waste products either.

This is important because if they were to continue eating and producing waste, then their body temperature would rise and they could potentially die.

Since they’re not going to consume anything, they also don’t need to regulate their internal body temperature, therefore saving a lot of energy.

On top of this, the snake can last a lot longer between feeds because they are using much less energy. So, since they are able to survive off of stored fat reserves, they can live without feeding for up to two months.

This makes them perfect candidates for pets or reptile enthusiasts looking to get involved with keeping reptiles.

Are There Any Other Types Of Sleeping Patterns?

Yes, there are other sleeping patterns that occur in snakes.

One of the most common is polyphasic sleep. Polyphasic sleep is a pattern of sleep where multiple periods of deep rest alternate with active periods of movement. This is similar to what humans experience while they are asleep.

In addition to this, another type of sleeping pattern known as “active” sleep is seen in more venomous species.

This sleep pattern involves a period of deep sleep followed by a period of activity. The difference here is that the snake stays awake throughout the entire period of sleep.

So, next time you see your pet lizard or snake curled up at night, remember that they may be doing something else besides just sleeping, and their bodies are a lot more fascinating and complex than we were first led to believe. 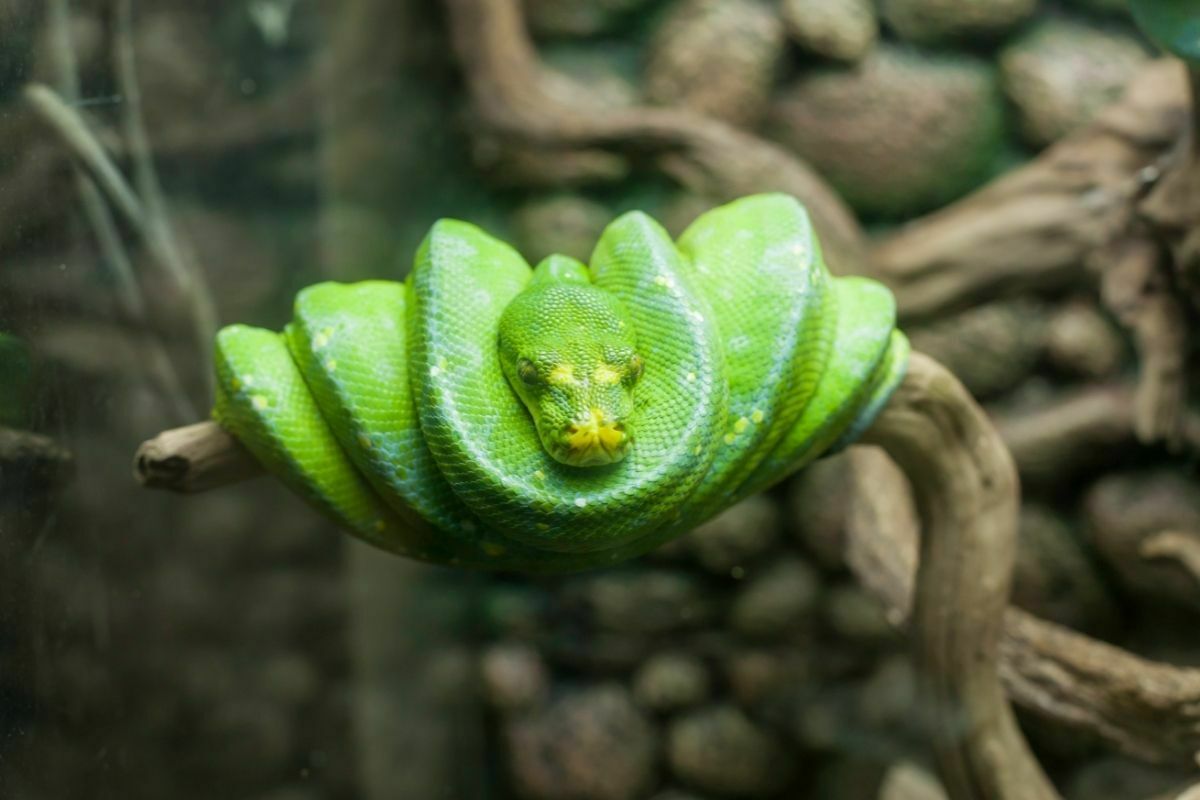 How To Tell When A Snake Is Tired

When it comes to telling when your snake is tired, the best thing to do would be to observe them closely. You should look out for signs such as:

If you notice something along these lines, then it’s probably time to give them a break.

Make sure that the temperature in their enclosure is at a decent level and make sure there are features like heated rocks or a decent burrow for them to hide away in.

This will mean that they spend less energy trying to regulate their temperature and will recover more from their sleepy periods.

How Long Do Snakes Sleep For?

As mentioned earlier, some types of snakes will go through periods of deep sleep lasting anywhere from 4-8 hours long.

If you want to know how long a specific species sleeps, then you’ll have to check out an animal encyclopedia or even contact someone who knows about snakes directly.

What Happens During Deep Sleep?

During deep sleep, the metabolism slows down significantly which means that the snake’s brain doesn’t receive enough oxygen.

With that said, no one really understands exactly why this occurs, but there are several theories.

When Do Snakes Sleep?

There you have it! Snakes do sleep and do it for lots of different beneficial reasons. It’s important that you keep tabs on your pets so that you can know if they’re getting too little sleep.

And if they do happen to fall asleep, then try giving them proper bedding and try not to let them overheat their enclosures.

Remember that you need to take care of your pets to ensure that they get all the things that they need to stay healthy.

As a snake owner, it’s important to ensure that we facilitate their every need and make sure that they’re comfortable within their surroundings to have a good life.

This includes having a good place to sleep and will also mean having to keep their enclosure at a good temperature.

Hopefully, our guide has made you a bit more of a snake expert and will help you to become a better snake owner.

Snakes are often seen throughout the wild and are often pictured having fights with other animals and hunting their prey. However, people often wonder whether they even come into contact with other...

Continue Reading
link to What Is The Lifespan Of A Corn Snake?

Corn snakes are one of the most common reptiles kept as pets. They come in a variety of colors and sizes, from tiny baby ones to large adults. Corn snakes are native to North America. They eat...