If you have a pet turtle, you will know that they are generally pretty quiet creatures, and you don’t hear them make very much noise very often.

On an occasion, you might hear noise from their tank that sounds like hissing, clucking, and shrieking. But, what if you hear a sneeze from their tank? Do turtles sneeze? Read our informative article to find out more about turtle sneezing?

Turtles can be found in many habitats around the world. They live in freshwater, saltwater, freshwater lakes, rivers, ponds, and even oceans. There are over 300 species of turtles, but only 3-4% of those species are considered as pets.

Turtles and tortoises do not sneeze very often, but when they do, it is usually the result of something causing irritation to their airways – potentially a bit of substrate, water, or even food.

Occasionally, a turtle sneeze could signal the presence of an upper respiratory tract disease (abbreviated to a URTD). So, a sneeze could have been caused by a bacterial or viral infection.

If you are worried about bouts of sneezing, try to take your pet to a veterinarian right away. Very frequent or persistent sneezes in turtles/tortoises/any reptile does tend to be a sign of this type of infection.

This article will take a look at turtle URTDs, so you know all the signs to watch out for. Continuous sneezing can be a sign of infection in the upper respiratory tract, rather than just food that has gone down the wrong hole.

Overall, you shouldn’t worry too much if you notice your turtle sneezing. Because URTDs are amongst common problems in pet turtles, reptile vets tend to be very good at treating them.

If you do think your pet is ill, just ensure that you take him or her to the vets pronto. Furthermore, adjusting the way that you care for your turtle can make a big difference.

In this article, we’re going to look at what you can do to help your turtle, how to prevent excessive sneezing, and when you approach your vet for help.

Just like us, turtles tend to sneeze when something has irritated a turtle’s upper respiratory tract. The most common cause of this irritation is food, substrate, or something else ingested going down the wrong way.

It may also be due to a blockage in the nasal passages. A blocked nose can lead to a buildup of mucus, which then causes them to sneeze.

Like in humans, when a turtle sneezes, it is its way of removing a particle that is irritating the turtle in its body.

We can draw from this information that it is pretty normal for a turtle to sneeze every so often – and when your pet does sneeze, you will hear a really unmistakable squeaking sneeze (though it will probably be a lot more high pitched than you are used to hearing).

So, hearing a sneeze from your turtle isn’t cause for worry – but that does change when it happens more frequently, or continuously.

This kind of sneezing, most likely signifies that your turtle is suffering from some kind of illness. It can have a bacterial or viral URTD, or your turtle’s sinuses could be filled with water.

If you think that this is the case, and illness is the root cause of your turtle’s sneezing, then you shouldn’t waste any time waiting for the issue to correct itself.

If you leave the illness untreated, you could stress your turtle (leading to worsening symptoms), or cause it to go into respiratory distress.

In addition to the sneezing, look out for other symptoms of a respiratory disease, such as:

As well as a respiratory disease, frequent or excessive sneezing from your pet turtle can be the result of low levels of vitamin A.

If you have noticed your turtle is sneezing more than normal, then research your turtle’s breed, and see if it is a type that sneezes when deficient in vitamin A.

In any case – you should take your turtle to see a vet, for professional treatment. 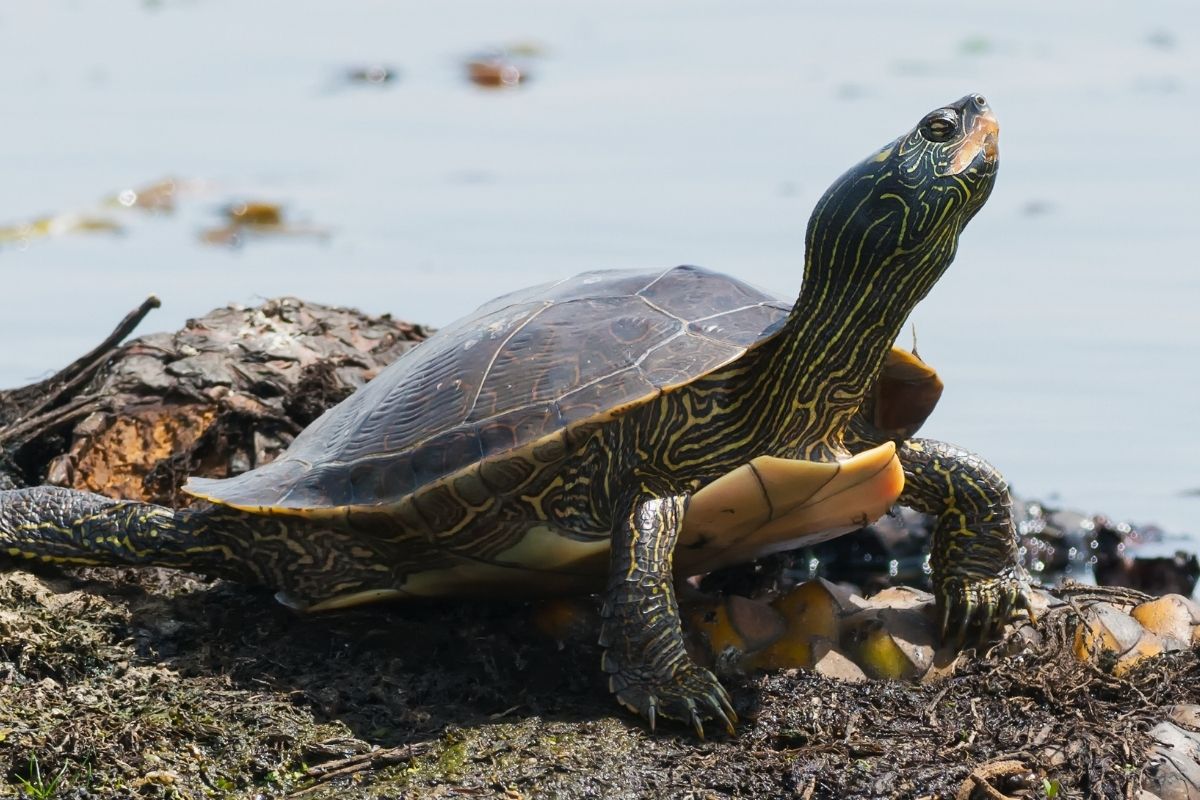 As turtles sneeze to dispel any kind of irritant that is causing problems in their airways or sinus cavities, you may see your pet turtle sneeze after eating voraciously, or after you change the substrate in your turtle’s tank.

You might even notice that your turtle sneezes while swimming around in his/her enclosure.

If you are concerned about your turtle’s health, then you need to get him/her checked by a qualified veterinarian immediately.

As mentioned above, sneezing can occur without reason, so don’t assume that your turtle is ill if they sneeze once or twice.

There are many reasons why a turtle would sneeze, and it is important that you know what they are before shelling out for an expensive vet visit!

As turtles spend so much time in water and mud, it is fairly normal for water or soil debris to enter their nasal passages, and they have ways to naturally deal with this quickly and easily.

However, if there is frequent sneezing, or any other symptoms of respiratory illnesses, such as labored breathing, you should begin to suspect URTDs as the root cause.

Take your pet to the vet’s office immediately, as often these conditions don’t resolve on their own, and can progress very quickly. URTDs are the leading cause of death for pet turtles.

As we have covered, seeing your pet turtle sneeze is not immediately a cause for alarm, and is usually just a reflexive reaction to anything that is stuck in a respiratory tract.

However, if you see continuous, consistent, or frequent sneezing, it could be caused by illness. Here is our deep dive into the two main causes for frequent illness:

There are several types of URTDs, which we’ll cover briefly here. The most common one is a bacterial infection called Pseudomonas aeruginosa.

This bacterium lives in stagnant water, and has been known to infect turtles’ sinuses, causing them to sneeze.

Another common cause of sneezing in turtles is a virus called mycoplasma. This bacterium lives in the body of warm blooded animals, including reptiles.

It causes respiratory infections in turtles, and is also responsible for respiratory diseases in dogs, cats, horses, cattle, sheep, pigs, and humans.

The third major cause of sneezing is a fungal infection called cryptococcosis. Cryptococcus neoformans is a yeast that grows in decaying wood and plants, and is found throughout the world.

It is not usually harmful to humans, but can cause serious illness in people who are immunocompromised. It is commonly found in birds and mammals, including reptiles.

To avoid these infections, the main thing you can do for your turtle is keep it in a warm environment – as turtles become far more susceptible to infections when their environment gets too cold.

This is because turtles are ectothermic organisms – and they are utterly dependent on external sources of heat to keep them warm.

So, drops in environmental temperatures cause them to become vulnerable to colds, and other forms of respiratory infection.

So, keep an eye on the heating bulb in their tank, and ensure that you haven’t put their enclosure in a location that is prone to drafts.

Keep an eye out for mucus discharge from your pet’s nose and mouth, as well as labored breathing – both of which are reliable signs of an infection.

If you spot any of these signs in addition to sneezing, take your pet to the vet, as they will likely need medical intervention to overcome the condition.

2. Hypovitaminosis A/Deficiency In Vitamin A

If your turtle hasn’t been receiving adequate nutrition, they can develop vitamin or mineral deficiencies – one of the other main causes of frequent sneezing in turtles.

Vitamin A is essential for healthy eyesight, skin, bone growth, immune function, reproduction, and even metabolism.

Vitamin A deficiency can occur in many species of vertebrates, including reptiles. It is often associated with a poor diet, especially diets lacking in fresh vegetables and fruits.

It can also result from prolonged exposure to sunlight, as this can deplete vitamin A reserves in the liver.

Vitamin A deficiency in turtles is resultant of a poor diet. Turtles require a well balanced diet, which includes quality protein as well as adequate leafy greens.

If, instead of this, you feed your turtle a poor quality commercially made turtle food, or just feed them leftover scraps, you probably won’t be meeting their nutritional needs. This will likely result in hypovitaminosis A, or a vitamin A deficiency.

Signs of this condition are changes in the appearance of your turtle’s skin or mucus glands. In particular, watch out for excessive mucus production appearing in their nose and their eyes.

They may sneeze frequently, producing a lot of nasal discharge, or may begin to make a wheezing noise when breathing. Your turtle may even seem lethargic, or begin to show signs of swelling in their eyes and ears.

Treatment of hypovitaminosis A in the early stages is essential – if left untreated, it can turn into pneumonia, which is frequently fatal, or may even affect your pet’s buoyancy, causing it to drown.

Does Every Turtle Sneeze?

Yes – most varieties will cough or sneeze in reaction to airway irritation. Here are some of the most popular varieties of turtle, and an answer to the question:

Yes, turtles that spend most of their lives in or around water do sneeze. This includes species such as the red eared slider, and the popular painted turtle. They have the capability to sneeze in the water, or when on land.

Yes, box turtles do sneeze, especially when they are ill, so look out for running noses, or swollen faces. Occasional sneezing is pretty normal for these animals, though.

In conclusion, this article has established that it is pretty normal for turtles to sneeze every so often, as well as taken a deeper look into what might cause your pet to start coughing and sneezing, and what to do about it.

Sneezing is a common response to respiratory infections, but there are plenty of other reasons why your turtle could be sneezing too.

The best way to find out is by taking a closer look at your pet’s behavior, and paying attention to any changes in their health, or getting the opinion of your vet.