Have you noticed that your dog makes a gurgling, bubbling or strange sound when it is breathing or sleeping? The sound can be deep, and raspy as if it is coming from their throat. This can make you a little worried or wary about your furry friend, and so you will want to find out what this means.

Whilst you are probably used to all of the funny noises that your canine companion makes, a loud gurgling noise does not sound good, or healthy. It can sound as if something is lodged or stuck in there, which can be a cause for concern.

This is why we have created a guide to help you understand what it means when a dog makes a gurgling noise when breathing or sleeping, to help you find out what is causing it, and how to treat it. So, where is this gurgling sound coming from and why does it happen when your dog is breathing?

If you are concerned about your dog’s health and wellbeing, then you should always seek the advice of a medical professional or a veterinarian. 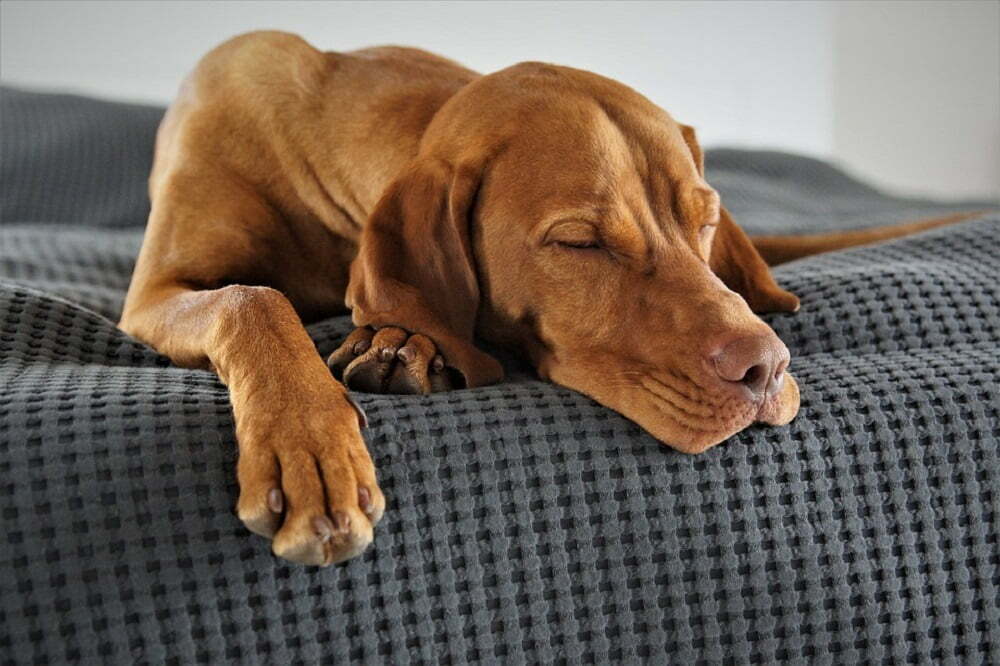 Why does my dog make a gurgling sound when it breathes?

Your dog can make funny noises rather often. However, if your dog is just simply breathing, and is wide awake, and you notice strange sounds, it could be a sign that there is a problem.

A gurgling sound coming from your dog’s throat or airways is not good, and it could show that they are struggling to breathe properly, or that there is a build up of fluids in the chest and lungs.

In other cases, this bubbling sound could be due to the fact that there is a blockage somewhere, which is restricting the airflow, and leaving your dog struggling to breathe. If you are concerned about this, and your dog seems to try really hard breathing, then you should take them to the veterinarian as soon as possible.

Why does my dog make a gurgling sound when sleeping?

If you hear a dog gurgling and making strange noises when they are sleeping, this is probably just a result of their REM sleep. REM sleep is the period during your sleep cycle where you have dreams, and so you may hear your dog whimper, see their eyes flicker, and their legs move as they dream.

You may even hear them snoring, gurgling, snorting and making all kinds of noises whilst they are sleeping, which is normal and nothing to worry about. Just like humans can make noises in their sleep, dogs can too!

Other causes of gurgling noises when breathing or sleeping

There are a few other things that can cause gurgling noises when sleeping or breathing. If you think that your dog is making strange noises when they are sleeping, then it could be due to a blocked passageway.

This is actually rather common, as some dogs are more prone to blocked passageways and airways. For example, your dog may have tumors on the windpipe, in the voice box, or in the throat that can cause the airways to narrow. In other cases, the dog may naturally suffer from a narrowing of the back of the throat, or may have narrowed nostrils. This is more common in flat faced dogs or short nosed breeds as they will find it more difficult to breathe.

In some dogs, they may have accidentally swallowed something, and some foreign object has become lodged in the throat, causing a lack of airflow and restricting their ability to inhale.

Other dogs may suffer after going into surgery and going under anesthesia. The throat can also narrow due to medication, where the throat muscles have become relaxed, or there may be a fluid buildup in the lungs, caused by a respiratory problem.

As there are clearly a myriad of reasons why your dog is gurgling when they are breathing or sleeping, it is probably a good idea to get them checked out immediately.

For instance, some dogs can inherit health conditions that can affect their ability to breathe. These conditions can be stertor, or even paralysis of the voice box.

For example, dogs such as Bulldogs, Dalmatians, Siberian Huskies, Labrador Retrievers, St. Bernards, Newfoundlands, or Golden Retrievers  are more prone to suffering from acquired paralysis of the voice box, and this could be the reason why they make strange noises whilst breathing.

This condition can also be inherited, through different breeds and passed down through generations of dogs. Inherited paralysis of the voice box can also be referred to as laryngeal paralysis, which can be diagnosed by your veterinarian. This is often found in short nosed dogs, or ones that are flat faced such as Pugs. Laryngeal paralysis is similar to another condition called Stertor, which can also have an impact on the way your dog breathes.

Does my dog have stertor?

Another reason your dog may be making strange noises whilst breathing is because of a medical condition called Stertor. Stertor is a condition that will often result in loud, noisy, bubbling and gurgling sounds coming from your dog when they breathe. This noise can come from the mouth and throat and is caused by a restriction of proper airflow in the nose and throat passageways.

This gurgling sound can happen because there is an issue in the windpipe, the throat or even the voicebox. In other cases, it may be due to a blockage in the throat, loose tissues in the throat, or trapped fluid which can result in gurgling, bubbling and odd sounds when your dog inhales or exhales.

Stertor is a condition that is often found in dogs with flat muzzles, squished faces or flat faced dogs. These dogs are bulldogs like French Bulldogs, Pugs or  Boston terriers. The nature of the breed, with a shortened snout results in many of these dogs having breathing problems and constricted airways.

If you have one of these types of dogs, and they seem to struggle with breathing properly, then it may be a good idea to talk to the veterinarian to see what you can do to help manage the situation.

What are the symptoms of laryngeal paralysis or stertor in dogs? 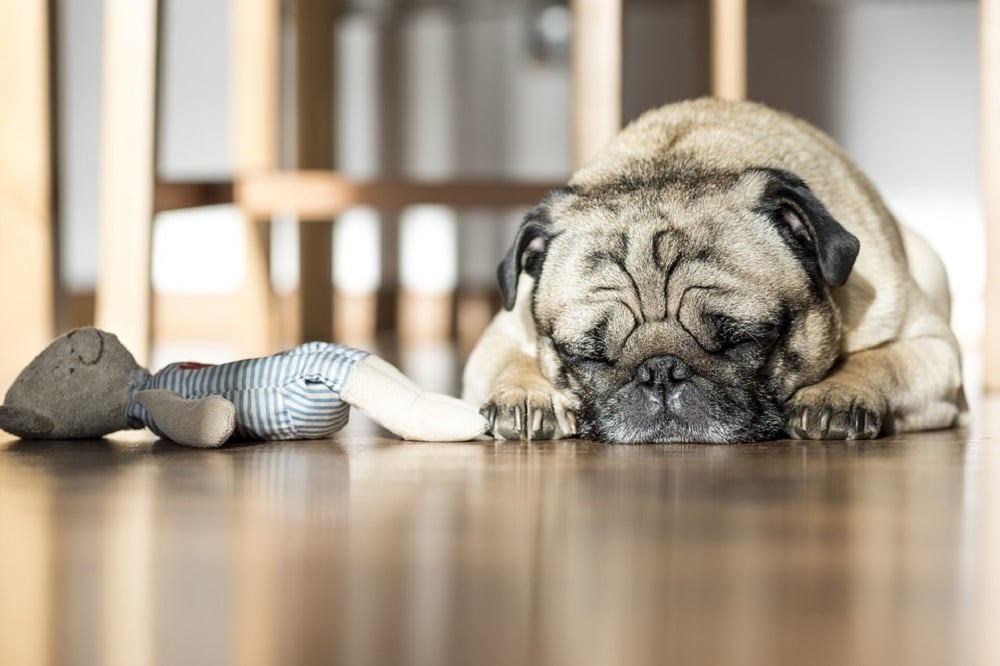 If you are wondering if your dog has been affected by stertor or laryngeal paralysis, then there are a few signs and symptoms that you can look out for. These are usually a change in breathing patterns, or a noticeable change in the amount of airflow your dog is intaking.

You may also notice that your dog makes loud breathing sounds that can be heard from far away, or they may struggle to bark. Some dog owners notice a change in the tone of voice when a dog whines or barks, which could indicate a problem in the voice box.

Your dog may sound like they cannot breathe properly, or they could be suffering from a flatness and loss of breath. In addition, the dog can be breathing with an open mouth if their passageways are blocked, as they are trying to get more air into their lungs.

Whilst these symptoms can be common in flat faced dogs, and some breeds are more prone to these health issues, it is important that you do not dismiss the noises, or ignore them. Your dog may have a serious case of stertor, or laryngeal paralysis that will need treatment, and you should take them to the veterinarian as soon as you can.

How to treat gurgling noises

It is paramount that you take your dog to the veterinarian if you notice any changes in their health, wellbeing, behavior and ability to breathe. Depending on the severity of the issue, and the amount of struggling they go through to breathe, your veterinarian may either suggest medical treatment or surgery.

If your dog has a very serious issue in the passageways, or there is a blockage in the airways, then they may need to be intubated, so that a pipe can be inserted to assist in your dog’s intake of oxygen. This will then help them breathe normally.

As your dog is clearly struggling to breathe already, it is vital that you keep them calm as much as possible, especially if you are taking them to the veterinarian. This is so they do not panic, and start taking short breaths, which can be even harder for them, and can restrict the airflow even more.

In the worst case scenario, where a dog really cannot breathe by itself, the veterinarian may need to perform an emergency tracheotomy. This is most commonly done if there is an obstruction in the airways, in which case intubation would be unsuccessful. In these cases, a small incision could be made so that the veterinarian can assist the dog in breathing, and allow airflow into the lungs.

After this is done, your dog will need to recover, and take many different medications. The veterinarian may also advise that you keep a watchful eye on your dog, and keep strenuous activity to a minimum.

To conclude, your dog making gurgling noises whilst sleeping can sometimes be normal, but you should get it checked out if the problem persists.

In addition, if your dog seems to make strange breathing noises when they are fully awake, then it may be a sign of a deeper respiratory issue, and it should be looked over by the veterinarian.