Contents show
1 Is there a reason why dog farts smell like sulfur?
2 Should I be worried about my dog’s excessive flatulence?
3 At what point should I worry about my dog’s smelly farts?
4 Does excessive flatulence cause my dog pain?
5 Is there anything I can do to stop my dog’s stinky farts?
6 Frequently Asked Questions
6.1 Does the speed of eating affect a dog’s flatulence?
6.2 Are greater levels of exercise helpful for a dog’s excessive farting?
6.3 Can hypoallergenic foods or supplements help?

Is there anything worse than your dog letting out a fart so rotten it makes your eyes water? They always seem to happen at the worst possible times too.

Whether you’ve got old friends over for a dinner party or you’re trying to impress the in-laws with your new home, your faithful pooch will do their very best to steal the limelight with their sulfur-scented flatulence.

Of course, farting is a natural process, a process both humans and dogs, as well as every other living creature, experience during their lives.

But at what point does canine farting become too much, especially when it fills the room of rotten eggs and sulfur.

The gas responsible for this hideous sulfuric smell is hydrogen sulfide, with sulfur being an essential mineral in a dog’s diet. Too much sulfur can however, lead to these eggy stink bombs.

Despite the humor associated with super-smelly dog farts, they’re sometimes an indication of something a little more serious.

If your dog has farts that regularly smell like rotten eggs or sulfur, this could be an indication that they’re suffering from some form of gastrointestinal issue.

Admittedly, most times when your dog lets off a badly-smelling fart, it will be due to something they’ve eaten.

However, excessive farts of this nature can also be a sign of an underlying health condition.

Below, we’ll run through some of the typical reasons why your dog’s farts smell like rotten eggs or sulfur, and at what point you should start worrying about them.

Is there a reason why dog farts smell like sulfur?

Through understanding exactly what causes sulfur smelling flatulence, the problem more often than not, can be solved.

To do this, it’s important to learn a little more about the various gases produced by your dog (lovely, I know).

Your dog’s gastrointestinal tract is host to a large number of different bacteria, viruses, fungi and other microbes. This group is commonly referred to as the intestinal microbiota.

For those of you wondering, yes, humans also have this thriving population inside us.

For both dogs and humans alike, the intestinal microbiota community plays a leading role in both the digestion of our food, as well as its fermentation.

Subsequently, it’s the bacteria in the large intestine that’s to blame for producing certain gases.

Some of the gases produced include the following: hydrogen, methane, nitrogen, carbon dioxide and oxygen.

While this may sound like there’s some kind of scientific investigation taking place in your dog’s stomach, a certain level of gas production is healthy and normal.

The worry however, is when this gas production becomes excessive, and therefore starts smelling like rotten eggs or sulfur.

The five gases mentioned above typically make up 99% of your dogs farts, and unless excessive, are relatively odorless.

The one gas however, that invariably causes a stench of rotten egg or sulfur is hydrogen sulfide. This gas is a result of the digestion process not working quite as well as it should in your dog’s stomach.

Should I be worried about my dog’s excessive flatulence? 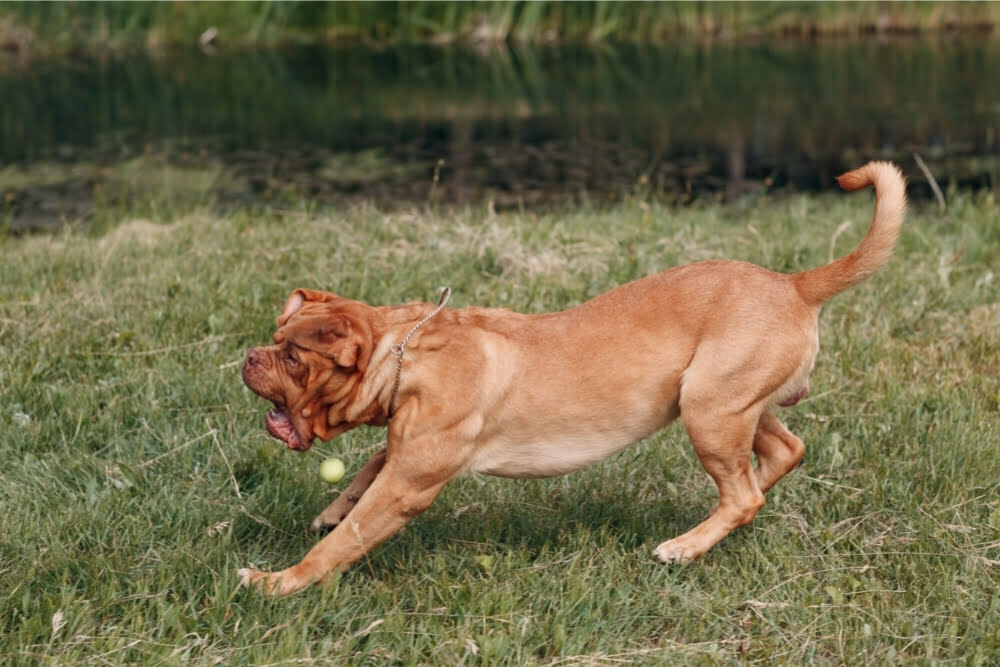 Excessive canine farting is sometimes an indication that something isn’t quite right with your dog. This can happen if your dog has been scouring through the trash and eaten something that’s upset their stomach.

Another common reason is perhaps you’ve recently moved your dog from one type of dog food to another. Excessive flatulence is also a telling sign that your pooch may be suffering from a certain food intolerance.

In scientific terms, excessive farting is a result of your dog’s digestive enzymes not being able to cope with the demands of breaking down certain fibers and complex carbohydrates.

This has a subsequent knock-on effect, as the bacteria is then unable to digest and ferment the nutrients in the food as efficiently. Because of this, gas build up increases, which then causes your dog’s farts to smell rotten.

Thankfully, more often than not, excessive flatulence is solely linked to a dietary issue, so can be solved fairly easily and quickly. However, for cases that can’t be solved quite as easily, we recommend seeking advice from your vet.

They should be able to find out whether your dog is suffering from something a little more serious such as an inflammatory bowel infection or another underlying gastrointestinal condition.

At what point should I worry about my dog’s smelly farts?

If your dog’s diet is high in red meat, eggs and other protein sources, this is likely the reason why your dog is thanking you with their sulfuric farts. These ingredients are all sulfur-rich and not suitable for a dog as part of their daily intake.

If however, you change their food, and the eggy smell continues to fill the house, then you’ll need to investigate the problem further.

If these farts are accompanied by similarly-smelling feces or consistent diarrhea, then you should contact the vet as soon as possible. Some of the conditions your dog could potentially be suffering from are:

By taking your dog to the vet as soon as you notice a prolonged problem, they’ll be able to perform a full examination on your pooch. If, fingers crossed, these conditions can all be ruled out, then the issue may be a food allergy or food intolerance.

Does excessive flatulence cause my dog pain?

For those of you, I’m guessing most, who’ve suffered from a stomach bug or period of excessive flatulence, you’ll know that your bodies contort in pain and discomfort from stomach cramps and trapped gas.

This, unfortunately, is similarly the case for dogs. If their farts are excessive and bad-smelling, it’s likely that their gastrointestinal tract is taking a significant amount of strain. As a result, your dog will experience tummy cramps and general discomfort.

The heartbreaking thing is that most of the time, dogs won’t show you that they’re in pain and suffering from these cramps. Instead, they’ll quietly cower in their bed or try to act as if they’re okay.

If however, you do notice a change in their demeanor, whether that’s a loss of appetite or increased lethargy, together with rotten farts, then this is your sign to take them to the vet.

Is there anything I can do to stop my dog’s stinky farts?

If you’ve taken your pooch to the vet and they’ve ruled out any underlying health conditions, then it’s usually safe to assume that your dog’s diet is the source of the badly-smelling flatulence problem.

Thankfully, there are a few methods you can use to help address the issue.

Firstly, you can try your pooch on a new diet. Perhaps the kibble you’ve been feeding them is rich in sulfur-inducing ingredients.

If you decide to try this method, it’s worth noting that you should do it gradually, not just with the click of your fingers.

Slowly introduce the new food in small quantities, while at the same time, slowly phasing out their old food.

Another intervention is to make sure your dog doesn’t scavenge. Dogs, like most animals, are constantly on the lookout for anything that smells and tastes good.

If left to their own devices, they’d happily root through trash bins, compost heaps, and various animals’ feces all day long.

So, if you’re able to stop your dog from scavenging, and eating a number of these often unsavory items, their gastrointestinal tract will be in a much healthier state.

Finally, try and avoid giving them unnecessary snacks and treats. Yes, I know it’s tempting when they’re looking at you pleadingly for the leftover crusts of your toast after breakfast, but your dog’s digestive system is a delicate one.

After all, there’s a reason why dogs have different food to humans. Their food contains all the nutrients they need in order to grow and live a healthy lifestyle, human food doesn’t.

If you can cut out feeding your dog these tidbits from the table, you’ll be significantly reducing the chance of smelling rotten egg or sulfur around the house.

Does the speed of eating affect a dog’s flatulence?

Yes, this can be a factor that’s worth taking into account. In fact, many people use slow-feed dog bowls which help to prevent your pooch inhaling air with their food the second you put the bowl down for them.

Since these specially-designed bowls significantly slow down a dog’s speed of eating, they also facilitate better levels of digestion, which can subsequently prevent bloating and obesity.

If you’re worried about how quickly your dog wolfs down their meals, this is definitely something to consider.

Are greater levels of exercise helpful for a dog’s excessive farting?

If your dog flops straight into its bed after eating, and generally spends all day lounging about, this isn’t ideal for digestion. A sedentary lifestyle will invariably cause dogs to fart more.

This is further enhanced if your dog typically eats indigestible foods. To help offset some of these problems, make sure your dog gets enough exercise every day.

It’s also beneficial to take them walking within 30 minutes of eating. This will help them poop and get rid of any gas.

Can hypoallergenic foods or supplements help?

It’s best to assume that foods labelled ‘hypoallergenic’ won’t work for all pets. For instance, your dog could still be intolerant to some of the ingredients.

We also recommend against buying dietary supplements off your own back. It’s much safer to consult with your vet first to identify the problem before going about trying to fix it.