Our canine companions are especially communicative creatures. Using their bodies (and quite often their bark!) they will very easily tell anyone around how they’re feeling. Traditionally, if their tail is between their legs, it isn’t good.

Contents hide
1 A Dog’s Tail – Why Position Matters
2 Doggy Body Language And Possible Interpretations
3 Why Is My Dog’s Tail Between Their Legs?
4 Final Paws For Thought

For instance, if you were to describe a human friend coming to you “with their tail between their legs,” it would probably be because they’ve displeased you in some way and they are feeling guilty about it.

However, their tail ending up between their legs doesn’t always mean that they are upset – it could also be that they are scared, trying to stop other dogs from sniffing their butts or genitals, or even just showing you submission.

There’s more to it than that, though, so let’s get on with the interpretation! 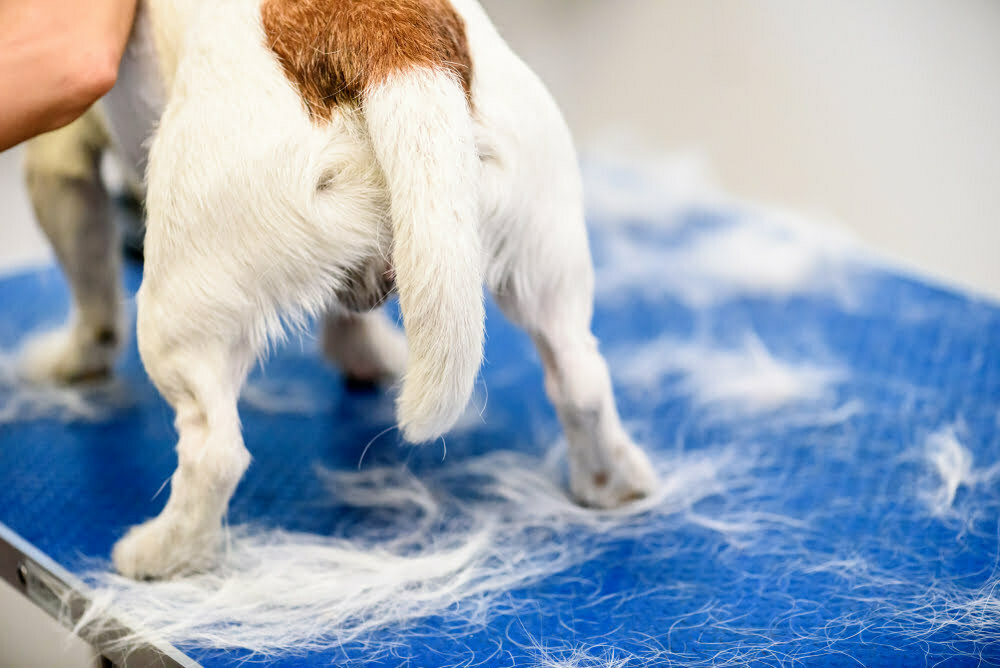 A Dog’s Tail – Why Position Matters

Your dog’s tail and the way it is positioned is a key indicator of how they are feeling. A tail that is held up and wagging is clearly indicative of a happy pup in a great mood – when it starts to droop is when you need to be concerned.

Although calm, quiet dogs may have their tails in a natural down position, this is obviously different from the directly tucked in between their legs situation. It’s pretty easy to tell when they’re chilling out or something is actually the matter.

So, what does it mean when a dog’s tail is between its hind legs? Usually that they are scared – if other dogs are around and acting boisterous, for instance, or a human starts yelling in the vicinity, look out for the tuck of the tail.

This is especially true of dogs who have recently been rescued from a shelter, as they are trying to get used to a new environment and may not feel especially secure or settled when you first bring them home.

You’ll also find that a dog can feel threatened while they eat, which might make them tuck their tail too – because they are concentrating on the bowl of kibble, as opposed to their surroundings, they feel protected by blocking their most vulnerable area.

Dogs are very protective of their genitals – wouldn’t you be, if they were constantly exposed? As a result, they may make a point of protecting them when their back is turned, especially if they don’t feel safe in that environment or with you watching.

Although they give it their best shot by barking, unfortunately, our furry friends cannot communicate with us verbally. What they can do, however, is demonstrate their emotions with tail movements and repositioning.

Though these are not always accurate, experts would suggest that these positions are all significant and mean something different:

Now that you’re more aware of this amazing doggy sign language, you should be able to keep a closer eye on your furry friend and work out what they’re feeling. Do bear in mind, however, that every breed is different and behaves differently!

Likewise, each dog on Earth is unique and means different things with its tail: only you as their owner can figure out what it is they want, by trial and error. Eventually, you’ll come to understand how to give them what they’re after with a single look!

Do bear in mind that breeds with short, stubby tails like Frenchies and Pugs are going to be a lot less communicative in this department, so you should probably pay more attention to their noises and facial expressions in order to understand them.

Why Is My Dog’s Tail Between Their Legs?

They’ve Been Naughty… And They Know It!

Uh-oh! Much like a toddler, your dog will probably look incredibly guilty after doing something they shouldn’t, especially if you’ve made a point of scolding them beforehand. You don’t even need to start the telling-off for their tail to droop!

The moment you find them, whether that’s caught in the act or in the aftermath of whatever misbehaving they’ve been doing, their tail is sure to end up between those legs. You’ll probably notice the tail before you even find the scene of the crime.

Don’t feel guilty about this, though. They’re scared of repercussions like being told off or banned from snuggles for a little while, not that you’re going to hurt them, so don’t worry – you haven’t done anything wrong.

They Feel Scared Or Unsafe In This Situation

When going to a new place or visiting new people, your dog might feel threatened by uncertainty, in which case their tail will droop visibly. Whether y’all are interacting with human strangers or new canine companions, it’s easy to get spooked.

If they believe a new dog is trying to sniff at their private parts before they’re ready to accept it, their tail might go between their legs to protect them. You should probably pull them back before they get cross about the invasion of personal space!

Likewise, in new situations like going to the groomers or taking a bath for the first time, your dog might droop their tail to indicate they are scared. Reassure them with some pats and a loving voice and it’ll be high in the sky again in no time!

They Are Demonstrating Respect Of Your Alpha Status

In the event that you have trained your dog well and they acknowledge you as the leader of your “pack” or family, they may well tuck their tail in order to show they are subordinate to you and ready to obey your orders.

This is especially the case if you’re in the middle of giving them a telling off – not only are they trying to apologize (more on that in a minute) but also indicate that you are in charge of the show and they definitely realize it now.

You should be glad of their submission in this regard, instead of worrying. Many owners fight desperately to achieve alpha status but unfortunately, their dogs are too stubborn to submit – luckily for you, your pooch is the obedient type!

They Aren’t “In The Mood”

Were you possibly trying to mate your female dog when her tail started to droop? Sometimes, even a bitch in heat doesn’t feel up to mating – she might put her tail in between her legs to indicate this to the stud attempting to snuggle up to her.

Likewise, if you’re simply at the park and there are multiple male dogs around her, it’s possibly a sign that she is overwhelmed by all of the attention if she tucks her tail, so try and get her away from them as soon as possible.

Just like humans, dogs should never be forced to mate if they’re not in the mood. When your pup shows clear signs of tucking like this in the middle of attempts to make puppies, unfortunately, you’re going to have to try again another time.

They Want To Say Sorry

When you find your dog at the scene of a crime, for instance eating something they absolutely should not be or chewing on your good furniture, there’s a good chance their tail will tuck immediately. Like humans, they know when they’re in trouble!

Although the tucking is indicative of submission to you, especially if you’re expressing your anger at their misbehavior with some yelling (which we don’t recommend, as dogs respond better to positive reinforcement), it’s also their way of apologizing for their bad behavior.

Like a belligerent child might scream and tantrum, if your dog’s tail stays high and stiff when you’re telling them off, they definitely do not see you as the leader of the pack, and they especially don’t feel sorry for whatever you’ve caught them doing. More training needed!

They Are Worried About Getting Hurt

If you can’t find any other reason for your dog’s tail to be tucked, it’s possible they are expecting repercussions for something, or they’re frightened that something or someone is going to attack them, even if there’s nothing around.

When this is the case, it’s really important to provide them with plenty of reassuring pats, hugs and smooches, letting them know in a calm, clear voice that they are safe and nothing bad will happen. Hopefully, some love from their best friend will help!

Should their drooping tail persist, even outside the presence of a threat, this could signify something is actually wrong with your dog. Keep an eye on things, and if you can’t figure it out, a trip to the vets should happen as soon as possible.

It’s possible your pup is anxious or depressed for some reason or has a physical ailment without any other obvious symptoms. Sure, it could be nothing and a waste of money, but there’s no harm in checking just to make sure, right? Peace of mind and your dog’s health are both invaluable.

So, initially, you probably thought that a tucked tail probably meant the same thing, right? Hopefully, this article has gone some way to helping you see that there are hundreds of potential meanings for your dog’s behavior.

It’s all about observation: the more time you spend with a dog – or any pet, really, even humans! – the easier it will be to spot what their movements, barks and other behaviors mean, as well as how to figure out what they want when they seem to be after your attention.

Although we’ve given a general overview of what the various tail movements and positions might mean, it’s important to bear in mind that every breed, every dog, is different, and what signifies sadness for one pooch could be completely different to yours.

That being said, a tucked tail is almost never a good thing. If you’ve not done something that would result in them showing submission to you, like yelling or perhaps catching them doing something naughty, it probably isn’t that.

When your dog is sad, scared or distressed, it’s in your best interest to figure out why and make it better ASAP. Using our guide, you’ll at least be able to rule out what things aren’t causing them upset, and go from there!