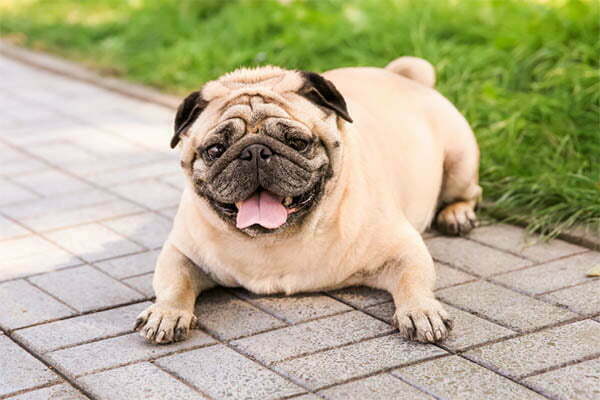 Contents hide
1 Using a Weight Chart for Pugs
2 How much should Pugs weigh?
3 What’s the ideal weight for a Pug at 4 months?
4 Are there any other ways of telling if my Pug is overweight?
5 Why are Pugs typically susceptible to weight gain?
6 Frequently Asked Questions

Pugs are good-humored dogs, perfect for both families and single dog owners. They’re not too timid or gnarly, making them a popular breed for many. Despite their small size, Pugs, like all dogs, can however become overweight if not monitored properly.

The average weight a Pug should be is between 6.3 to 8.2 kg. This translates to 14-18 pounds, and is the case for both male and female Pugs.

If your Pug’s weight exceeds 8.2 kg or 18 pounds, they are most likely overweight.

Another effective method of finding out whether your Pug is overweight is by checking their upper torso area and making a visual observation of what you see. This is handy for those who don’t readily have access to a pair of scales.

All you need to do is apply a little pressure to your Pug’s chest and see whether or not you can feel their ribcage. If you can, this usually means that they’re a good, healthy weight.

If however, you can barely feel their ribcage at all, this suggests there is more fat than ribs to touch and that your Pug is likely overweight.

Despite this, it’s worth remembering that all Pugs are different. So long as your Pug isn’t too far on either side of the weight spectrum (not too skinny or not too fat), you should be okay.

Their ribcage should be easy to touch, but not visible to the extent it can be seen before the waistline.

Using a Weight Chart for Pugs

Developed by the Cambridge BOAS Research Group, the Pug weight chart provides a useful visual indication of how much a Pug should weigh, and the signs to look out for when they become overweight.

According to the chart, some of the typical signs to look out for in Pugs that are too thin (BCS 3), are visible ribs and tops of lumbar vertebrae, zero palpable fat, and prominent pelvic bones.

Whereas, at the other end of the scale, Pugs with a BSC of 9 and classified obese have the following charcteristics: ribs not palpable, heavy fat deposits over lumbar and neck, and obvious abdomen rounding.

Pugs rated at BCS 7,8 and 9 are also at increased risk of breathing difficulties.

All in all, this weight chart is a highly effective method of tracking your Pug’s weight, and knowing if and when their weight has become too much.

How much should Pugs weigh?

As touched upon earlier, a healthy Pug weight is generally considered to fall between 6.3 kg to 8.2 kg (14-18 pounds). However, it’s important to note that some Pugs can weigh lower or higher than this range, and still be healthy.

In situations like these, it’s worth consulting your vet as they’ll be able to take into account factors that influence Pug weight such as gender, mixes in heritage, and muscle percentage.

It’s also worth taking into consideration the height of your Pug in comparison to their weight. The average height of a male Pug is 11.8” (30 cm), while for females it’s 9.8” (25 cm). These measurements are made to a Pug’s shoulders.

For Pugs that are considered runts of the litter, it’s unlikely that they’ll reach these average heights. Therefore, they should weigh a little less than the general recommended guidelines.

What’s the ideal weight for a Pug at 4 months?

For those who’ve recently welcomed a Pug puppy into their homes, there are a number of things to think about to ensure their new pooch becomes accustomed to its new surroundings.

It’s important amongst all these distractions however, to properly monitor your Pug’s weight, even at a young age.

These are the healthy ranges and should be used as a framework when figuring out how much to feed your Pug in its early months.

Are there any other ways of telling if my Pug is overweight? 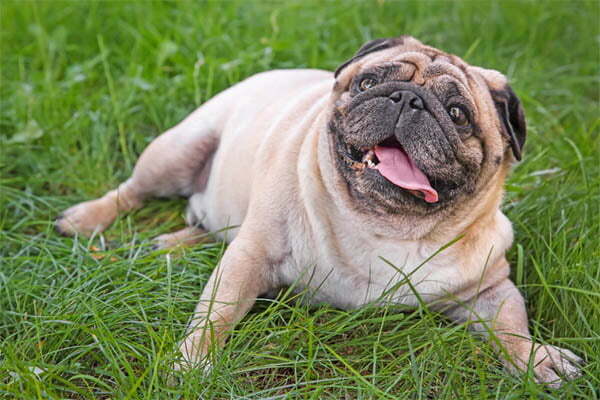 In addition to weighing them on scales, checking the upper torso area of their body, and using weight charts, there are indeed other methods of telling if your Pug is overweight or not, without having to take them to the vets.

Just like you can check whether or not you can feel their ribcage, the same can be done with a Pug’s spine. If you can easily see your Pug’s spine, this usually means they’re too thin.

However, for healthy Pugs, you should be able to feel their spine with ease to the touch. This is because their spine should only be covered by a very thin layer of fat.

Another method of assessing your Pug’s appearance is checking their waistline. Healthy Pugs should have a visible waistline that is only slightly smaller than their chest. If this isn’t the case, it may be worth investigating further.

One of the most telling factors of whether a Pug is overweight are their fitness and energy levels.

If your Pug becomes fatigued and starts breathing heavily after the most simple exertions, such as walking up the stairs or walking to the corner shop, this is a strong indication that they’re out of shape.

Admittedly, Pugs are a brachycephalic breed and pant almost all the time, but even so, they shouldn’t experience any type of fatigue this quickly.

If this is a common occurrence and isn’t directly related to external factors such as warm weather or fumes in the air, it’s recommended that you take your Pug to the vet and devise a suitable diet and exercise regime.

A final simple method of telling if your Pug is overweight is their ability to groom themselves.

If your Pug no longer has the flexibility required to itch scratches or get into the positions necessary to effectively groom themselves, this is often an indication that they’re overweight and need to cut back on their food intake.

If you notice this soon enough, you should be able to avoid a trip to the vets.

Why are Pugs typically susceptible to weight gain?

The simple answer is they just don’t know when to stop eating. Unlike most other dogs that are able to self-regulate and stop eating when they reach capacity, Pug’s simply don’t possess the ability of knowing when to stop.

This is why it’s extremely important for Pug owners to be vigilant, and make sure they don’t give their Pugs the opportunity to overindulge and potentially harm themselves.

Excessive feeding regimes are often the problem for a Pug’s problematic weight.

Mealtimes should be kept to twice a day, and these should be controlled, limited portions.

It’s worth noting that if you have another dog, in addition to your Pug, make sure they’re fed in separate bowls, removing the possibility of the Pug wolfing down both portions. After all, Pugs do tend to think with their stomachs!

When your Pug gets older and starts to approach a more senior age, they invariably become less active, and subsequently, less efficient at burning calories.

To help combat this, it’s important to amend and control their portion sizes in the best way possible. If left to their own devices, they will also be significantly less playful and active in your home and backyard.

So making sure you take them out for at least a couple of walks a day will help offset any potential weight gain.

How do I know if my Pug is pregnant, not overweight?

Knowing when your Pug is pregnant, and not overweight, isn’t always easy during the early stages of pregnancy. There are however, some early signs that are useful to look out for. Some of these are:

While none of these potential signs are fool-proof for determining whether your Pug is pregnant or not, they’re certainly a good starting point.

If however, you’re looking for a more scientific and unequivocal method to test for pregnancy, you may be better opting for a Pug ultrasound or blood sample.

Yes, one of the major difficulties for overweight and obese Pugs is the fact that they’re significantly more prone to heat stress during the summer.

This is often the case with most overweight dogs, as the increased insulation the fat cells provide and the added heat they generate from exercise, make it much more likely to develop heat-related illnesses.

How do I know if my Pug is underweight?

As mentioned earlier, an easy way of telling if your Pug is underweight is if you can see their ribs. Other common factors include them not eating a healthy diet, old age, and having worms or other parasites.

In terms of weighing your Pug to check if they’re underweight, it isn’t as simple as plonking them on the scales and seeing if they weigh below the recommended range of 14-18 pounds. Some pugs may weigh less and still be completely healthy.

The best and most accurate method of finding out whether your Pug is underweight or not is by looking at their waistline and ribcage.

A healthy Pug’s waistline typically has a small indent between the ribs and hips. If there’s more than just a slight indent, then your Pug is likely underweight.

Similarly, Pugs that are a good weight, won’t have visible ribs when they’re standing upright. If you can clearly see your Pug’s ribs then this is another indication that they’re under optimal weight.