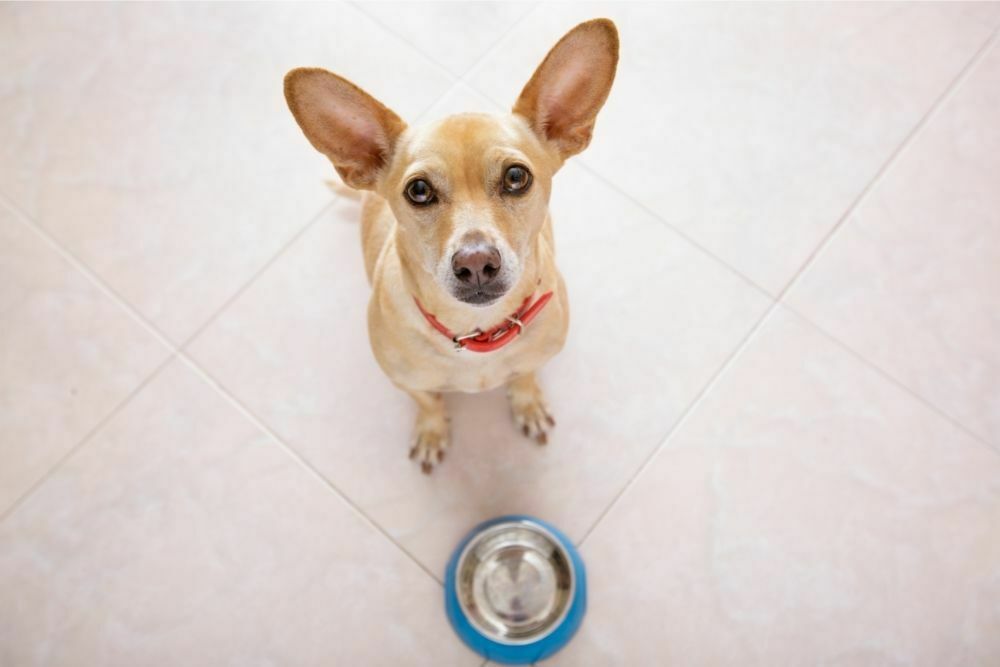 Getting a new puppy is exciting, but when bringing your puppy home for the first time or your dog has just had puppies, you need to be aware of their dietary requirements to ensure that they’re as happy and as healthy as possible.

That being said, if you’re a new puppy parent you might be wondering: how long can a puppy go without eating or drinking?

In this article, I cover some guidance on a puppy’s diet, so you have more knowledge at your disposal when it comes to feeding your puppy. That being said, nothing should replace the guidance of your veterinarian.

So, let’s get started.

How long can a puppy go without eating?

No puppy should go without eating more than a couple of hours beyond the required feeding periods. The only exception to this would be how long puppies can go without eating at night, as they will be asleep for the majority of the time.

How long can a puppy go without eating after being born?

A newborn puppy needs to eat every two hours up until they are three weeks old. In this time, a puppy’s primary focus is going to be on feeding, sleeping, and keeping warm next to their mother as they grow over the coming weeks. This is because when your puppy is born, they’re initially blind and not able to walk. That doesn’t stop them from being hungry, though!

With their sense of smell and a bit of persuasion from you and their mother, your puppy will be able to find a nipple to suckle on and will begin to become stronger by the day. For the next few weeks, eating every two hours is going to be fundamental for their growth and development.

How long can a newborn puppy go without eating before it starves?

As soon as your dog gives birth, you need to be monitoring how much newborn puppies are eating. A newborn puppy needs to eat every two hours. If they go longer than this time frame without eating, the likelihood of them falling ill and being at risk of dying of starvation becomes higher. Due to the lack of milk, the puppy’s immune system won’t be receiving what it needs and thus, will be less resistant to fighting off infections.

From three weeks, this duration of time will change from every two hours to every three hours, as they will have gained some weight and will be stronger at this point. At three weeks, your puppy is generally much more alert, and they will have already started to stand a bit, too.

From four weeks, they’ll be feeding every four to five hours from their mother’s milk. At this stage, your puppy can go without food for maybe an hour beyond their normal feeding time. That being said, it’s not advisable for your puppy to go more than five hours without food.

At this age, your puppy won’t be getting all of the calories that they need from their mother’s milk alone, and you will need to start supplementing your puppy’s feeds with a mixture of puppy specific food that has been thinned down with water.

In order to support their growth and development at this stage, it is crucial that you are monitoring their feeding schedule carefully and that they’re getting enough milk from their mother as well as feeding them simultaneously so that they continue to grow strong.

How long can a 4-8 week puppy go without eating?

When your puppy reaches four weeks old, they will still need to feed every five hours. At this age, their diet will primarily consist of puppy food that is mixed with water, but they will still require the nutrients from their mother’s milk.

That being said, you will need to increase the amount of puppy food that you feed them every week while they slowly wean off their mother’s milk.

The more you feed your puppy dry kibble, you will need to provide your puppy with fresh drinking water. This is incredibly important, as it will not only hydrate your puppy but will also help to aid their digestion as their body adjusts to their new diet.

Once your puppy reaches four and seven weeks, your puppy can go without eating for every five to six hours, but this really shouldn’t exceed five when they’re just four weeks old.

As they get a bit older, they can manage to go without food a couple of hours beyond five hours but making them wait this long is not advised.

Not only do you want your puppy to be as healthy as possible, but you also want them to be as happy as they can be – and a lack of food will soon start to affect their overall wellbeing as well as their body.

When your puppy reaches six weeks old, they can go for around eight hours or less without eating. That being said, you need to avoid letting your puppy go without food for this long and long stints in general, especially whilst they’re rapidly growing.

Monitoring their food is so important in the first 8 weeks of their life, and you need to be vigilant if you notice that one of the puppy’s in your litter is significantly smaller than the rest of them. Although there is always a runt of the litter, it is up to you to ensure that they catch up with the rest of their siblings and that all of the puppies are a happy, healthy weight.

By the time your puppy has reached eight weeks old, their mother will be getting tired of them feeding from her after nursing them for the past two months. That being said, it is to be expected that she will naturally wean them off while you’ll start to increase their daily puppy food meals.

An eight-week-old puppy ideally needs to be fed three to four times daily, but this will depend on the breed and the size of your pups. If in doubt, always check the instructions on the back of the kibble package and work with your veterinarian to come up with a feeding schedule that is the best for your puppy.

It is important to note that this is only a general guideline, and should never be used in replacement of your veterinarian’s advice on your puppy. In this 8 week period, the rate that your puppy will grow needs support from the right balance of nutrients to ensure healthy development. 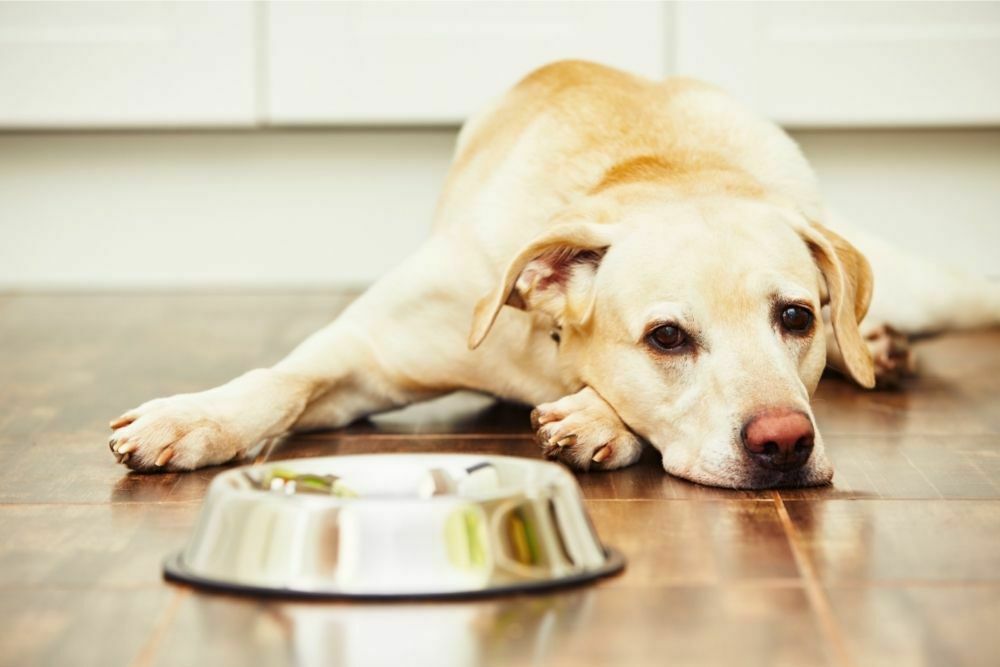 How long can an 8 week old puppy and older go without eating?

At eight weeks old, you should be feeding your puppy kibble 3 to 4 times a day. It’s important that you keep to this routine until your puppy is three months old or twelve weeks. If you’re unsure, it is always best to check with your veterinarian, but your puppy ideally should not go without eating and drinking for more than a few hours.

As it isn’t recommended that puppies are taken away from their mothers before eight weeks old, once your puppy reaches this age it’s usually time to go to a new home. That being said, it is always important to check with the breeder how many times your puppy is used to being fed.

How long can a puppy go through the night without eating?

This entirely depends on the puppy itself and the age that they’re at! A newborn puppy will be feeding throughout the night every two hours, even if they are half asleep when they’re nuzzling their mother for the milk!

However, provided that your puppy can sleep the whole night without experiencing any night-time or separation anxiety at 8 weeks old, then they can go without eating and drinking for the whole night.

Not all good puppies are good sleepers at first, but the key is to be patient with them.

Occasionally, you might find that your puppy doesn’t want to eat. Missing one meal every now and then shouldn’t affect them too much when they’re over 8 weeks old. That being said, if your puppy is constantly refusing to eat there could be a bigger issue at fault.

Below are a few potential reasons your puppy might not be eating:

How to encourage your puppy to eat

If your puppy isn’t eating enough, then it is your responsibility to make sure that you’re encouraging them in the right way. Below are some tips you can try.

Always make sure that your puppy has fresh water available to them at all times to ensure that they’re getting enough liquid throughout the day, too.

You should always monitor how much your puppy is eating and when they’re eating to ensure that they are as healthy and as happy as possible.

If you notice that your pup is losing weight or hasn’t got an appetite for their food, then it is always best to take them to the vet for a proper check-up and to ensure that nothing serious is wrong with them. It’s better to be safe than sorry!