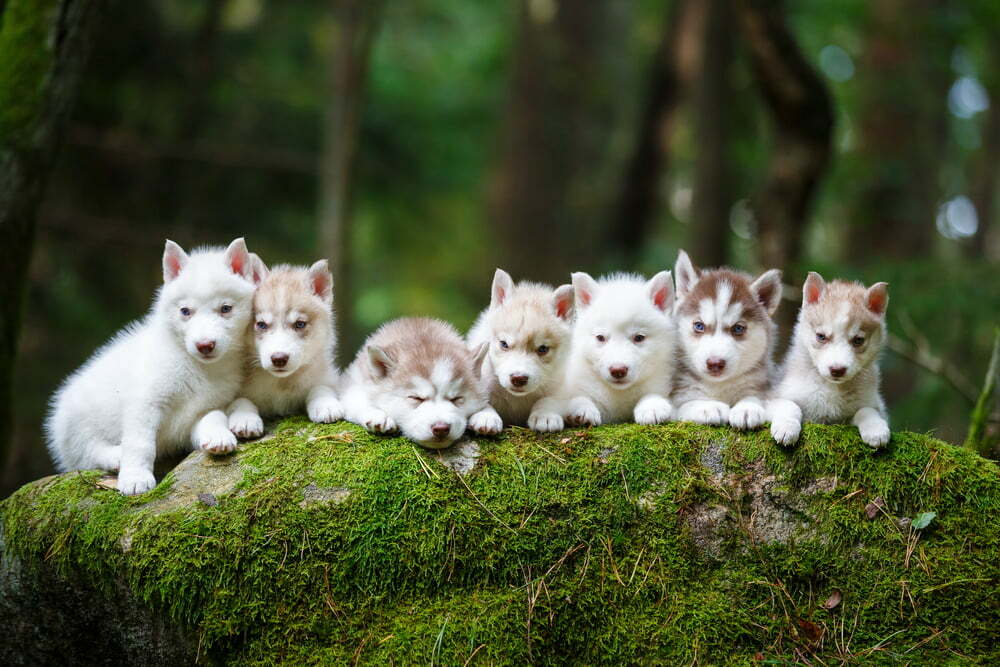 As a medium-sized, energetic dog, a Husky makes a great pet for individuals who live an active lifestyle and love the outdoors.

If you’ve never bred a Husky before, you might be wondering: How many puppies can a husky have?

In this article, I cover some key information about Huskies, from how many puppies a Husky can have to their first time litter sizes.

Without further ado, let’s get started.

How many puppies can a Husky have?

On average, you can expect a Husky to give birth to a litter of around six puppies in their first litter. That being said, the number of puppies in a litter can differ depending on different variables such as the health of the mother, her weight, and her age.

Bearing this in mind, it is not out of the ordinary for Huskies to give birth to 4 or fewer puppies, with some only birthing 2, although this is less common. How many puppies your Husky has will depend on the dog itself.

What can influence how many puppies a Husky has?

There are a variety of factors that influence how many puppies your Husky will have in their first litter. That being said, it is important for you to gain a better understanding of these factors if you’re planning to breed your Husky.

If your Husky came from a large litter, this doesn’t necessarily mean that she will follow suit when it comes to having her own litter of puppies.

Generally speaking, genetics only account for roughly 15% in determining a dog’s litter size. So, what else can determine the size of a litter?

Age – Litters tend to be smaller the younger the female Husky is. That being said, when a Husky has grown to the age of 3 and 5 years old, they are more likely to have litters ranging between 4 to 6 puppies.

At this age, they may even have more than 6 puppies, although this tends to be a rarer occurrence. On the other hand, when the Husky is below 3 years old or older than 5 years old, you can expect her to have fewer puppies. In some cases, this could mean that your Husky only has 1 or 2 puppies in a litter.

Litter stage – Typically speaking, a Husky tends to have fewer puppies in their first litter compared to a second litter. That being said, this also depends on how old your Husky is when she gives birth and can also be determined by the amount of time that you allow between each litter.

Diet – Good nutrition is important to maximizing litter size. A well-balanced diet full of all the nutrients, vitamins, and other supplements that supports a growing female dog is more likely to help your Husky to have a healthier and sometimes larger litter.

Although all of these factors can affect the size of your Husky’s litter of puppies, it is important to remember that it truly will depend on the individual Husky so it can be hard to predict. Although your veterinarian will be able to count how many puppies you can expect,

How old does a Husky need to be to get pregnant?

However, it is not advisable to let her fall pregnant at this stage of her life, and she should not be bred until she is at least two years old, to prevent any health problems with her or any of her puppies.

A female dog should never be bred during her first heat cycle so that her body matures fully to support a healthy pregnancy. After all, at the age of 6 months, she is still a puppy herself and needs you to allow her the time to grow and develop into adulthood!

A female husky can fall pregnant throughout her lifetime. However, once she reaches 7 years old, pregnancy can become riskier for her.

That being said, the most ethical way to breed puppies is to find the right balance of allowing the dogs to first mature properly, but not breeding them too late in their life, either.

What are the risks associated with a dog having too many litters of puppies?

When it comes to breeding your Husky, you need to know the risks of overbreeding. Although you might decide that you just want your Husky to have one litter of puppies, if you intend to breed her multiple times for a business venture, you need to ensure that you’re giving her the time to recover.

Repetitive pregnancy with little recovery time in between puts strain on the female dog and her health, while also affecting the puppies, too.

Having too many litters will also influence the number of puppies in each litter, often being fewer than usual the more that you overbreed.

As an ethical breeder, you must ensure that you’re improving the breed, not worsening it. This means making sure that all the relevant health checks have been carried out and making sure you wait until the puppies have grown to assess how they get on.

Waiting this time allows you to see what needs to be improved so, as a responsible breeder, you can find a more suitable stud for the next breeding. By rushing this process, ethics go out of the window.

Not only is overbreeding bad because it puts a female dog’s body in danger, but overbreeding also affects the breed of dog.

Eventually, the health of the puppies decreases with each litter that you don’t carry out the relevant checks, and any defect or health conditions would keep being passed on, decreasing the overall quality of the breed.

It’s important to remember that it’s not only the pregnancy itself that puts physical strain on the Husky. Nursing a litter of puppies is tiring, let alone several in a row without a year to rest.

That being said, if the litters are too close together, she’ll battle to successfully nurse all her puppies properly. This will influence the puppies’ health and condition, at times leading to serious illnesses or even death if they don’t have the necessary antibodies to fight off infection.

Not only is overbreeding unethical, but it isn’t worth the guilt you will feel when you see the condition of your beloved Husky deteriorate.

Overbreeding is detrimental to the dog, the breed, and the bloodline, too. Always make sure that you’re allowing your dog the time to rest once you have bred her to ensure that she and her puppies are as healthy and as happy as possible.

How long is a Husky pregnant?

Typically speaking a Husky will be pregnant for around the same amount of time as any other breed of dog: an average of 63 days.

So, what are some of the signs that your Husky is pregnant?

Decreased activity – Your Husky will typically seem more lethargic and less active than usual, this could be a sign that they are pregnant! As Husky’s are usually a high-energy dog that loves staying active, this sign will usually be pretty easy to spot if they become reluctant to go out on their walks.

Changes in appetite – Early on in pregnancy, your Husky might have a decreased appetite, and might even vomit occasionally. Later on, their appetite could fluctuate the other way and she may become dissatisfied with her meals and seem hungrier than usual.

Enlarged or discolored nipples – If your Husky is pregnant, you might notice that their nipples have grown in size and have become somewhat rounded when they are normally flat.

You may also notice your dog’s nipples turning a slightly darker red than normal, which would indicate an increase in blood flow. Later into the pregnancy, her nipples may occasionally leak milk, as well.

Weight gain – Your Husky’s abdomen expanding as her puppies grow can be one of the clearest indicators of a dog’s pregnancy, especially if your dog has no other reason for sudden weight gain. That being said, this won’t happen straight away, so is one to keep an eye out for.

Unusual behavior – If your Husky is pregnant, she might begin to display behaviors that seem out of the ordinary for her. This can include her becoming needier than usual, looking for extra attention, or it could involve her seeking isolation away from the rest of the household.

Nesting behaviors – Towards the end of her pregnancy, it is normal for your Husky to display nesting behaviors in preparation for her puppies. She might end up shredding her bedding, and could even become reclusive as she gets nearer to birth. That being said, it might be wise to restrict her contact with very small children.

As early as the first 20 to 30 days, a vet will be able to feel your dog’s belly and might be able to determine whether she is pregnant or not. That being said, if you suspect that your dog could be pregnant, it is always best to get a check-up booked in with the vet to learn how far along she is.

How can you tell how many puppies your Husky is carrying?

Knowing beforehand how many puppies your Husky is carrying prepares you in many ways that include but are not limited to:

If you have a suspicion that your Husky is pregnant because she is showing signs of pregnancy, you will need to get in touch with your veterinarian to learn more about the number of puppies she is carrying.

At around 25 to 28 days into her pregnancy, your vet will be able to feel your dog’s uterus and will be able to get a better understanding of how many puppies she has by counting the number of lumps.

More accurately, though, at 25 days, you can book your Husky for an ultrasound. This method allows your vet to get a clearer picture and better idea of how many puppies are in her uterus.

Lastly, at 55 days, you could take your dog for an X-ray. During the X-ray, the puppies’ skulls and spinal cords can be viewed more clearly and make it easier for your vet to get a more accurate headcount for you to make the appropriate arrangements for their arrival.

While the last two methods are generally perceived to be fairly accurate, there is still a chance that your Husky may give birth to more puppies than you’re expecting.

How many puppies your Husky will have is hard to predict and will depend on the individual Husky, as the number is likely to vary depending on her age, weight, and health, as well as the other variables I go into above.

The average litter size for a Husky is around 6 puppies. If you want to breed husky puppies, make sure that you do your research and consult with your veterinarian beforehand.