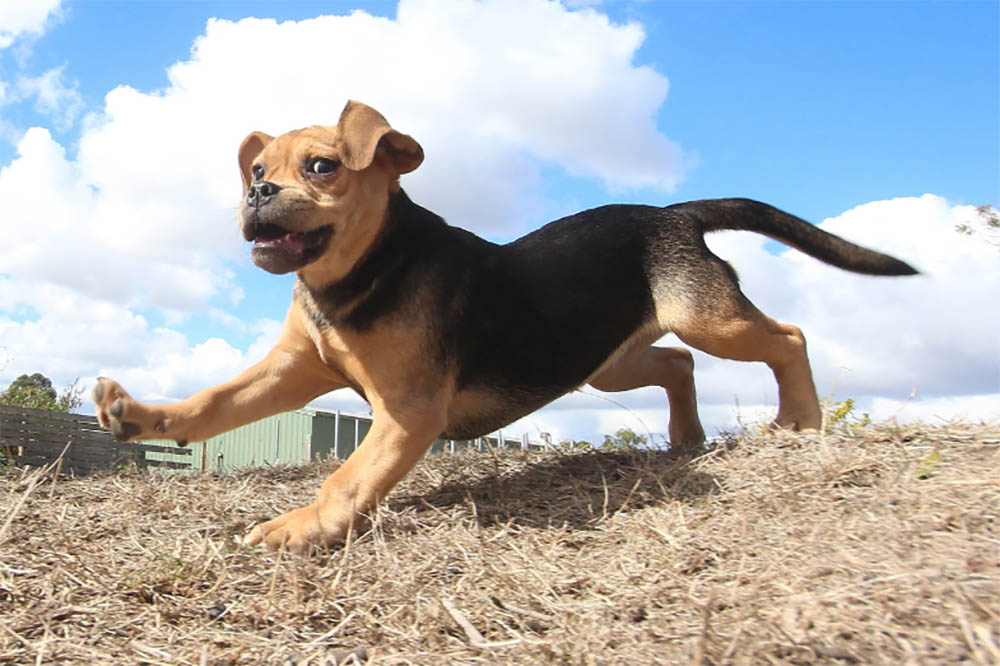 Contents hide
1 How old do puggles get?
2 How much do puggles cost?
3 Do puggles like to cuddle?
4 How much does a puggle sleep?
5 Why does my puggle shake?
6 Are puggles lazy?
7 Can puggles swim?
8 Should I get a puggle?
9 In summary

Puggles are relatively new to the dog world. Crossed between a male pug and a female beagle, the puggle was created back in the 1990s by Wallace Havens in the US.

It was found that this had to be with a male pug and female beagle because more health issues arose if the male was bigger than the female.

Pedigree dogs like pugs tend to come with a lot of health issues. Choosing a crossbreed like the puggle can be a great way to avoid some of these health issues, however, they will still come with some of their pug genes.

With these complications, it can lead you to wonder how long you’ll get to spend with your beloved pet, and how old do puggles get.

How old do puggles get?

The good news is that they should live for around the same time as any medium sized dog! You can expect your puggle to live for anything between 10 to 15 years.

You’ll just have to be mindful of the fact that your puggle could have issues with their breathing because of their shorter snout. It’s also what makes them more likely to snore when they’re sleeping!

Puggles won’t have the same severity of health issues that pugs do. In fact that’s why people choose to breed them with beagles – so that they get a healthier dog!

But puggles can find difficulty breathing during exercise. However, this won’t mean that your puggle will live for any less time than any other medium sized dog.

How much do puggles cost?

Puggles can cost anywhere between $800 to $1800. This will be entirely dependent on the breeder as well as the color of the puggle.

The price will vary depending on where you choose to get your puggle from, as different breeders will charge different prices.

You are likely to find some puggles which are cheaper, but you should be mindful of the fact that the breeder might not have a good reputation.

You should always be wary of supporting puppy mills, too, as these are very cruel for the dogs.

Puggles do indeed like to cuddle! Puggles are quite sociable dogs, which means they naturally love affection.

Because puggles enjoy spending time with their humans, they are a naturally affectionate breed.

So if you’re looking for a dog that will love to have a cuddle with you during the day, the puggle is the perfect choice.

How much does a puggle sleep?

Puggles sleep for anything between 12 to 14 hours in the day! This is considered to be pretty average for a dog, so it’s nothing to worry about.

You should look out for a change in sleeping pattern, as this could indicate a bigger problem. But your puggle isn’t lazy just because they like to spend so much time sleeping. In fact, it’s healthy for them to want to sleep so much!

Why does my puggle shake?

It’s important to note if the shaking is accompanied by other symptoms. If your puggle is shaking, it could just mean that they’re cold, stressed, or excited. This is fairly typical for some toy breeds.

If your puggles shaking is accompanied by other symptoms such as vomiting or diarrhea, it will be worth a trip to the vet just to make sure nothing serious is going on.

Shivering and trembling can also be symptoms of more serious conditions such as kidney disease or poisoning. So it’s important to keep an eye on your dog and watch for any other indicators that something more serious might be going on.

If the shaking is a simple tremble and it happens quite often, it’s likely not something to be worried about.

While their pug family has a reputation for being quite lazy or docile, this isn’t the case with puggles. Puggles tend to be more active than pugs. They have an average exercise need, so should be happy with short walks throughout the week.

Puggles are a great choice for those who lead a semi-active life, as they won’t be too energetic that they need to spend ages burning off their energy, and they’re not so lazy that you can hardly rouse them from their bed.

Puggles sleep for an average of 12 to 14 hours a day, which is the average for pretty much most dogs.

Pugs are notoriously bad at swimming. So because of the beagle DNA that puggles have been mixed with, you’d think they would be better swimmers than their pug ancestors.

They could swim in a pinch if they had to, but they don’t have the stamina needed for longer swims. Puggles may even be reluctant to get anywhere near the water, but all dogs differ.

Should I get a puggle?

You may be wondering whether a puggle would make a great companion for you. There are a few factors that you will need to consider first.

Puggles tend to make great companions for those who lead a semi-active lifestyle.

They won’t need lots and lots of exercise to keep them healthy, so are perfect if you’re looking for a dog that only needs to be walked once a day.

Puggles are very sociable dogs. They love affection, and will be the perfect companion for families with kids. They tend to be very playful thanks to their beagle parents.

However, they have also inherited their beagles’ penchant for being difficult to train.

They’re very stubborn dogs, and it will take dedication to train them properly. It’s important to note that unwanted barking can be a real issue if the dogs haven’t been trained properly.

Puggles are relatively easy to care for, too, making them great dogs for first time owners. Their care requirements aren’t that complex.

Puggles do tend to shed quite a lot, so it will be important to give their coat the odd brush.

So there you have it! Now you know that puggles will live for anything between 10 to 15 years, just like any other medium sized dog.

Combining the DNA of a pug and a beagle does make for a healthier dog overall, but puggles do still suffer from some breathing difficulties. This also makes them not the best swimmers, because of the shorter snout.

Puggles aren’t typically lazy dogs, and are quite playful. They tend to sleep for an average of between 12 to 14 hours a day, just like any other dog.

If you’re looking for an easy to care for four legged companion, then the puggle will be the perfect dog for you and your family!