As dog owners, we all know that our pooches think predominantly with their stomachs. So, when we let them off their leads outside, there’s every chance that they’ll find something to sniff, and more often than not, taste.

Contents show
1 Can moss be poisonous or toxic to my dog?
2 Why does my dog like eating moss?
3 Are there any risks to my dog eating moss?
4 How can I prevent my dog from eating moss?
5 Frequently Asked Questions
6 Final Thoughts

One of the most common things for dogs to like eating is moss. These are small, non-vascular flowerless plants that grow just about anywhere. If you typically take your dog for walks in parks, fields and forests, there’ll almost always be moss in close proximity.

But why do dogs like eating moss, and is it bad for them? In this guide I’ll look to answer both questions, as well as explaining how you can prevent them from eating it in the first place. 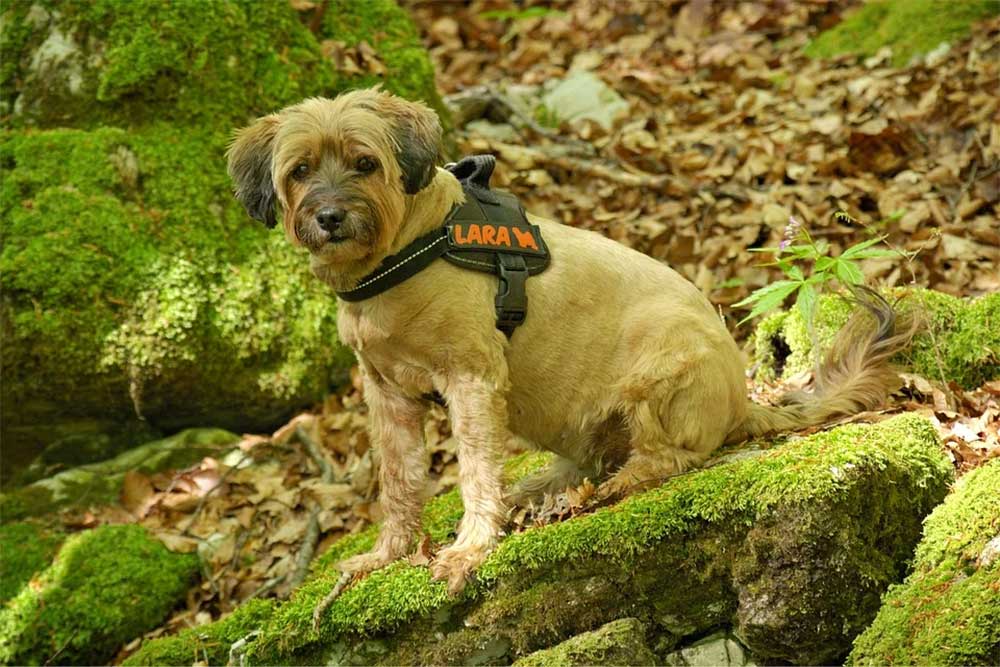 Can moss be poisonous or toxic to my dog?

It’s always worrying when you find your dog munching away on something during their walk. The thought of them eating something that may have contained bacteria, disease or poison is enough to concern any dog owner.

However, when it comes to moss, you should be pretty safe. The majority of moss is completely non-toxic, so eating it won’t do your dog any harm. At worst, some forms of moss like peat moss can cause slight gastrointestinal irritation. But again, this isn’t anything to worry too much about.

Despite the harmless nature of moss, it’s worth taking into account other external factors like pesticides on the moss or nearby poisonous plants. This can mean that eating moss may still make your pooch sick. 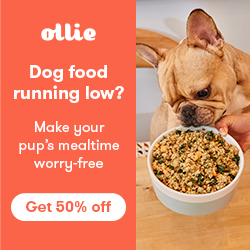 If you’ve ever wondered what it is about moss that makes your dog so desperate to eat it, then let me explain. There are a number of reasons why dogs like to eat moss, some of which are behavioural, while others are more instinctual.

Firstly, the aesthetics of moss. Many experts believe that one of the chief reasons dogs like to eat moss is because of its appearance, taste and texture. If you’ve ever seen your pooch scamper across the sand on a beach, you’ll notice just how excitable and happy they are. This is because it’s a new experience.

The same sentiment applies with eating moss. Quite often, once they’ve had a try of it, all they want to do is keep eating it. Some research also suggests that there are vitamins and minerals in moss that aren’t present in most commercial dog food. If this is the case, then there’s no wonder why your dog is so fascinated by the stuff!

Another reason why dogs like to eat moss is because it’s instinctive. After all, dogs are descendants of wolves, and wild canines not only hunt for prey, but also eat a variety of grass, plants and moss. Therefore, it should come as no real surprise that many domesticated dogs have a natural instinct for eating moss and other natural produce in the wild.

If your dog’s appetite for moss isn’t down to aesthetics or instinct, it may be the result of pica or another underlying medical issue. Pica in dogs is a condition which causes them to compulsively ingest non-food items. Common examples of things dogs with pica may become obsessed with include cloth, plastic, wood and paper. A craving for moss may well be a further manifestation of this condition. If you suspect that your pooch is suffering from pica, it’s important to take them to a specialist or vet to help treat them.

A final reason why many dogs like eating moss is simply because it gives them something to do. Dogs are simple creatures, so if they’re not receiving sufficient interaction or stimulation, they’ll quickly become bored and look for a way to expel some of their energy. The majority of the time, this pent-up energy manifests itself in them munching on anything they can get their gnashers around. This is especially true if your pooch is a puppy or an adolescent.

Beyond this, if your dog is a little unsure of themselves and has never come across anything like moss before, they might eat it purely out of curiosity.

Are there any risks to my dog eating moss?

I’ll now look to explore some of the different types of moss in greater detail, and evaluate any potential risks they may pose to your dog.

The moss that you and your pooch will come across more often than not will be green moss. It’s the variety you’ll likely find in your garden or down the local park. Luckily, the green variety of moss doesn’t pose any risk to dogs if eaten. It isn’t considered toxic or poisonous so there’s no need to worry too much if you see your dog munching on it.

As I mentioned earlier however, some plants may be treated or sprayed with chemicals such as pesticides. This can cause gastrointestinal issues which are thoroughly unpleasant for dogs.

Furthermore, it isn’t unusual for moss to be positioned near poisonous plants such as mushrooms. So if your dog eats these alongside the moss, there will be a more serious cause for concern. The moss itself isn’t the problem, it’s the surrounding environment you need to worry about.

If you suspect that your pooch may have eaten a poisonous plant alongside the moss, you should contact your vet immediately as a matter of urgency. While gastrointestinal issues can be effectively treated at home, it’s also worth letting the vet know about these too. You may think there’s no need, but it’s always better to err on the side of caution.

Another form of moss you may come across is peat moss, which is partially decomposed sphagnum moss. A large number of gardeners typically use this type of moss as compost to help their plants retain moisture.

Because of its value to gardeners, peat moss is usually sold commercially, which means it’s often treated with pesticides and chemicals before being distributed to members of the public. Due to these interactions, some peat moss contains traces of substances which are harmful to dogs.

While peat moss, like green moss, isn’t toxic to dogs itself, it can act as an irritant when eaten, due to some of the harmful chemicals that it interacts with. These irritations can affect a dog’s breathing, skin, eyes and digestive system.

How can I prevent my dog from eating moss?

Unsurprisingly, it’s not the easiest job trying to stop your dog from eating what it wants. After all, they’re driven by their stomachs. This challenge is even more difficult when it comes to puppies. These guys will eat absolutely anything and everything whilst they’re going through their teething stages and they’re full of curiosity.

Therefore it’s important to establish some effective methods of preventing them from eating moss. Listed below are some of the most popular and proven methods of achieving this. 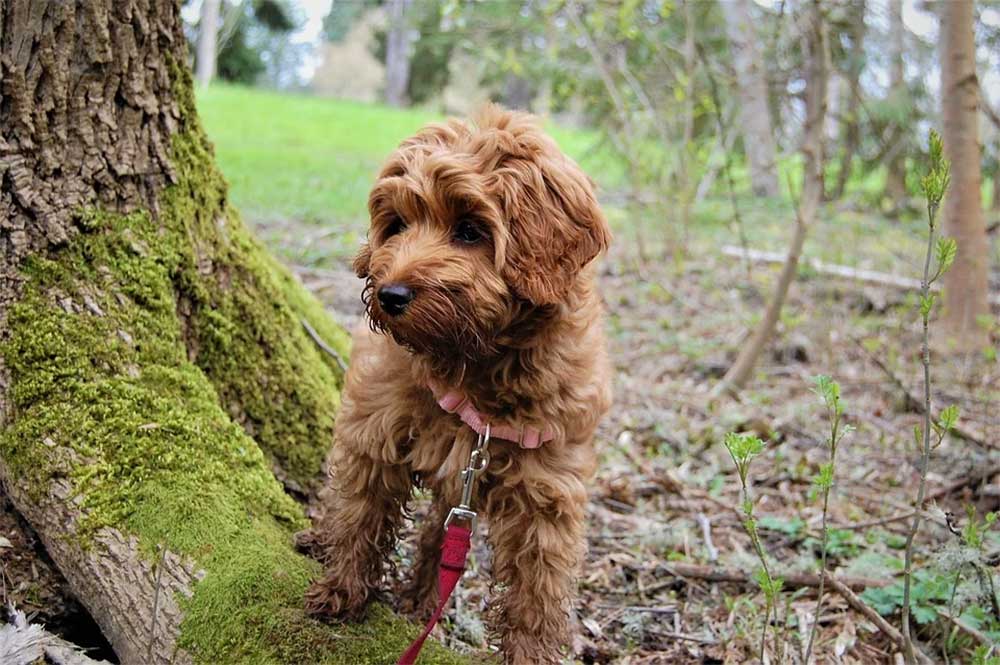 Why are insecticides and pesticides toxic to dogs?

To ingest them, would make your pooch seriously unwell. Therefore, it’s important to read the instructions of insecticides and pesticides very carefully and avoid using them if there’s a potential risk.

Is lawn feed and moss killer poisonous to my dog?

Yes. These products typically contain fertilizers, weed killer or ferrous sulphate which work to kill moss. If your dog ingests any of these chemicals, they’ll harm their skin and likely cause gastrointestinal problems.

Products that contain iron may also cause iron poisoning. So, you should try your best to keep your pooch far away from lawn feed and moss killer products.

Is compost poisonous to my dog?

Given that most people’s compost is full of a combination of garden waste and mouldy food, it’s hardly surprising that compost is often poisonous to dogs. This is because it can produce mycotoxins which are sometimes fatal for dogs.

Therefore, dog owners should always try to keep their compost bins far out of reach. If worse comes to worst, and your dog manages to raid your compost, you should immediately seek urgent veterinary advice.

What are the symptoms of pica in dogs?

The symptoms of pica can be easy to pick up on if you’re around when your dog is eating non-food items. However, some dogs are sneaky, and will consume these items in secret.

Nevertheless, some of the main symptoms of pica (not including the swallowing of non-food items) may include: vomiting, diarrhea, increased lethargy, and a lack of appetite.

Is algae harmful to dogs?

While it’s important to remember that most algae are completely harmless, there are some species of blue-green algae that can cause catastrophic consequences for dogs. These species produce toxins that can kill a dog almost instantly. This is particularly important to know if you regularly walk your dog near the sea or a lake.

Not all dogs that come into contact with this blue-green algae will die, but those that survive, or are exposed to lower levels of toxin, could be susceptible to health problems such as chronic liver disease and tumors.

If you’ve had your dog for a decent period of time, you’ll be all too aware that dogs will eat anything. Therefore it’s up to us, as their owners, to make sure they’re consuming the right things and not snacking on anything that’ll make them feel unwell.

When it comes to moss, it’s good to be aware of some of the risks, but unless they’re plastered in pesticides and chemicals, your dog should be fine. Just make sure you keep your vet in the loop with anything you’re concerned about!