So, you’ve noticed a pink spot on your dog’s nose. Now what?

The first step is to learn about all the different potential causes of a pink spot developing on a dog’s nose. This will give you an idea of which cause is most likely and, in turn, will tell you how to proceed.

Today’s article will cover all the most common causes of pink spots on canine noses in addition to the best courses of action for each condition.

Before we proceed any further, we should point out that it’s important to make the distinction between a pink spot and a pink bump.

While a pink spot on your dog’s nose can have many causes, which usually are not serious, a pink lump or bump could potentially be more serious.

If the pink area on your dog’s nose is noticeably raised or protruding, you should treat it as a bump and not a spot. In this case, you should take your dog to the vet at the earliest opportunity for examination and diagnosis.

The reason a pink bump is more of a cause for concern than a pink spot when it appears on your dog’s nose is that a raised bump or lump can be an indicator of nasal polyps or a nasal tumor.

If your dog’s pink nasal spot is also accompanied by nose bleeds, swollen cheeks, crusting on or around the nose, or mucus discharge from the nose, then nasal polyps are the most likely cause.

This all sounds pretty unpleasant, but nasal polyps can usually be removed through a relatively quick surgical procedure, although monitoring will be necessary for the foreseeable future to make sure that the polyps don’t return.

Another potential cause is something called Collie Nose, which is a dermatological condition that has been linked to Lupus. If your dog’s usually black nose begins to lose its pigment and you notice any inflamed, bleeding areas, Collie Nose could be responsible.

We know that ‘tumor,’ in particular, is a scary word, but try not to panic.

Tumors are more likely to be benign than malignant, so it’s best to try not to worry until your vet has given their opinion, although we understand that this is much easier said than done when it comes to the health of your furry friend.

The most important thing is that you contact your veterinary practitioner as soon as possible to either rule out or address any serious problems.

Now that we’ve clarified the difference between a pink spot and a pink bump on a dog’s nose, let’s explore some of the potential causes and conditions of pink spots on canine noses.

While it’s wise to be concerned about any change in your dog’s nose, as with most things, the simplest solution is often the most likely one.

It’s entirely possible that your dog has developed a pink spot on their nose due to excessive or clumsy scratching.

Just as we humans could irritate our noses and develop pink or red patches if we scratch too hard, a dog can do the same while scratching.

The good news is that as long as the skin doesn’t seem to be broken, bleeding, or inflamed, you can usually leave a pink spot caused by scratching to heal on its own without the help of any creams or ointments.

Your dog’s nose may look a little pink for a few days, but it should eventually revert back to its normal color.

If the pink spot does not ameliorate within a couple of days, though, it’s worth looking into the possibility of other causes.

Pink spots on dogs’ noses can also be caused by a variety of allergies. The most common allergy associated with the development of pink nasal spots in dogs is contact dermatitis.

One common source of allergies in dogs is one you might never normally think of: their food bowl.

Often, dog food bowls are made from plastic compounds or polymers, which can trigger allergies in certain dogs.

If you suspect that an allergy is responsible for the pink spot on your dog’s nose, a good place to start is by replacing their food bowl and trying to find a substitute for any plastic chew toys or balls that your dog has been using recently. If the spot disappears by itself after you’ve made these changes

However, it’s still a good idea to have your dog checked out by a vet, even if you feel sure that an allergic reaction is responsible and that the problem has subsided.

The vet will be able to run some tests and examine your dog for any additional signs or symptoms that you may have missed, just to make sure that there’s nothing to worry about.

You may have heard of vitiligo in humans, but did you know that this immune disorder can also affect our canine friends?

Sometimes, a change in skin (including the nose) and fur color in dogs, especially in the early years of a dog’s life, can indicate the onset of Vitiligo.

For example, if your Beagle’s nose has started to turn from black to pink and you either don’t notice any other symptoms or see that their coat has begun to lighten, this is a good indication that your dog probably has Vitiligo.

However, despite the fact that a treatment has not yet been developed for Vitiligo in either humans or dogs, the condition shouldn’t affect your dog’s quality of life in any way.

It doesn’t cause pain or sickness – your dog will just look a little different from now on, and that’s okay.

With that being said, as with every listed condition in this article, it’s still wise to take your dog to the vet if you suspect they have developed Vitiligo.

Your vet will be able to either confirm your suspicion or provide a more informed diagnosis. Either way, you’ll have the peace of mind of knowing for sure what has caused your dog’s pink spot.

There is also a condition called Snow Nose that commonly affects dogs when the weather gets colder.

Not all dog owners are aware of this condition, but most vets are. So, it’s likely to be one of the very first causes your vet suggests if you tell them your dog has a pink spot on their nose, especially in the winter months.

Snow Nose is a condition caused by the breakdown of the Tyrosinase enzyme.

Tyrosinase is responsible for the production of melanin in animal tissues through oxidation, and from the research that we currently have available to us, we know that extremely cold temperatures can cause this enzyme to break down.

As the tissue’s ability to maintain melanin levels becomes impaired by the breakdown, the pigmentation of the skin lightens, leading dogs with darkly colored noses to develop pink spots.

Snow Nose is not a dangerous condition, and it usually resolves itself when the weather warms up again, so in the absence of any other signs and symptoms, you probably don’t need to worry.

Also, please note that if your dog develops a pink nasal spot during the summer months, this doesn’t necessarily mean that Snow Nose is not the cause.

Tyrosinase breakdown can also happen when the weather is warm, although it is not yet known why this is.

There is some speculation that it could be linked to fluctuating thyroid function, while some researchers have suggested that sunlight levels could be in some way responsible.

Ultimately, though, Snow Nose is not known to cause any additional symptoms or adverse effects. 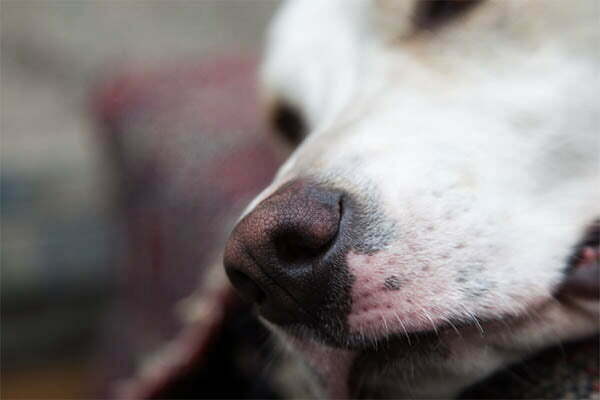 What should I do if I notice a pink spot on my dog’s nose?

If your dog has developed a pink area on their nose, the best course of action is to call your vet.

If the area looks like a spot (not raised or noticeably inflamed), your vet will probably reassure you that the cause is likely to be one of the conditions we listed in this article.

While your vet may still recommend coming in for a checkup, you can probably relax in the sense that your dog’s nose spot is unlikely to have a serious cause.

On the other hand, if you notice a pink lump or bump on your dog’s nose, you should book an emergency appointment with your vet as soon as possible.

Again, try not to panic, but it’s important to get a medical opinion as soon as possible because some of the conditions associated with raised bumps on a dog’s nose can have serious implications for your dog’s health.

In the meantime, don’t apply any products or treatments to your dog’s nose unless instructed to do so by your vet.

Try to keep your dog from scratching or worrying their nose too much, and carefully monitor your pup for any changes that you might need to report to the vet.

Why does my dog have a pink nose?

If you have noticed that your dog does not have a pink spot or bump on their nose, but rather that their entire nose is pink, you might be wondering why that is.

Luckily, unless your dog’s nose has been black or brown for their entire lives and has suddenly or gradually changed to pink over time, a pink nose on a dog is usually not a cause for concern.

If your dog is less than 12 weeks old, it’s possible that their nose is simply still pink because they are still in the puppy stage. It’s very common for puppies to have pink or pink and black noses when they are born, and most of the time, the nose will change color.

If your puppy’s nose is pink and brown, however, there’s also a chance that their nose will remain pink into adulthood, which is nothing to be concerned about.

Moreover, some dog breeds are more likely to retain their pink noses throughout their lives. Some of these breeds include the Pitbull, Boxer, Cocker Spaniel, Siberian Husky, Poodle, Dalmatian, Doberman, Pointer, Samoyed, Golden Retriever, Irish Setter, and Australian Shepherd.

If your dog has developed a pink spot on their nose, the good news is, you usually don’t need to worry. Unless the spot is raised or inflamed (in which case, it is a lump, not a spot), the cause is likely to be either harmless or easily treatable.

The most likely causes of pink spots on a dog’s nose are allergies, vitiligo, a scratching injury, or Snow Nose.

While allergies can lead to complications if left untreated or if the trigger remains accessible to the dog, the situation can usually be managed through a combination of treatment and removing potential allergens.

Vitiligo, Snow Nose, and redness from scratching (in the absence of broken skin) are not harmful conditions.

However, it’s always a good idea to contact your vet for a professional opinion when in doubt.