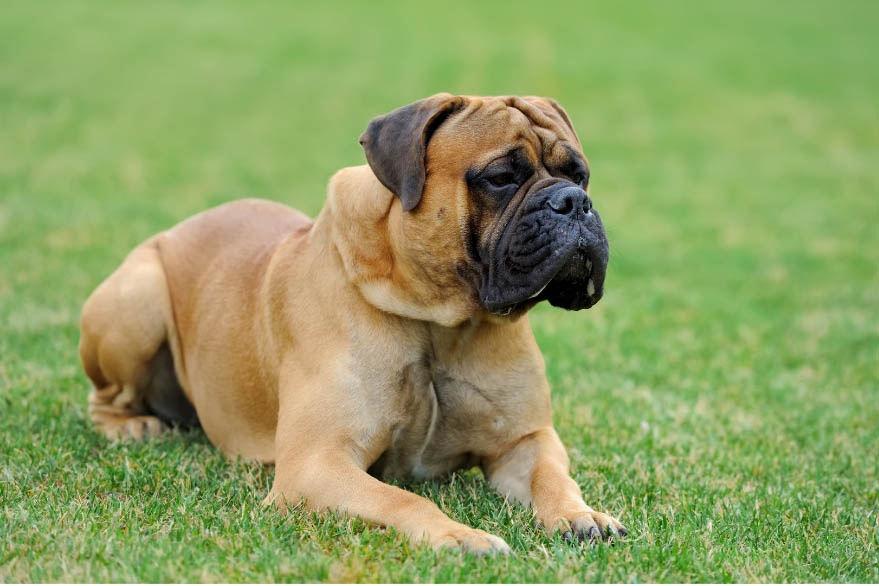 The more I learn about people, the more I like my dog – Mark Twain

Mastiffs were made to be family dogs. They’re loyal, affectionate, and incredibly protective of the members of their family and territory, which betrays their ancestral roots, as they were originally bred to be guard dogs and still obey their primary calling and duty.

Calm and placid while at home, Mastiffs are notoriously wary of strangers and have been known to bowl people they don’t know over and pin them to the ground until being told to let them go by their owner.

Their loveable demeanor, size, and easy-going nature ensure that Mastiffs can fit in with just about any family dynamic, but because of their large size, they’re not a suitable companion for small children.

As a breed, Mastiffs are intelligent and intuitive and while they’re more than happy to be couch potatoes, they need to be exercised and socialized properly, to make sure that they don’t get bored and give in to any destructive urges.

They also, as they’re classified as being a brachycephalic (short-nosed) breed, have a tendency to snore, which can be slightly off-putting, and tend to drool a good deal more than most dogs do.

And even though their short fur coats don’t need a lot of grooming, because they thrive in human company and love being petted and smoothed, they might demand that you brush them, even though they don’t actually need to be brushed.

In short, if you have the room that big dogs need to fully make themselves at home and stretch their legs, don’t mind being woken up in the middle of the night by snoring that’s as loud as a New York Subway train, aren’t the proud parent of a couple of toddlers and have the time and energy that a Mastiff requires, then yes, you should definitely get a Mastiff, But if you don’t meet any or all of those requirements, then maybe you should think about giving a home to a different breed of dog.

Are Bullmastiffs Easy To Train?

But, it’s important to put the time and effort into training then that they need, which means that ideally, you devote at least two hours a day to exercising and training a Bullmastiff in order to ensure that he learns to follow your commands and listen to you.

They also have a tendency to be stubborn, single-minded dogs, so it’s vital to start training them as early as possible, and because they can also be aggressive toward other dogs of the same gender, Bullmastiffs need to be properly socialized from an early age, as large, snarling dogs can be frightening and the way they behave toward, and with other dogs needs to be brought under control as early as possible.

While they don’t take to the water with quite the same zest and reckless abandon as labradors do, and their size and build make it difficult for them to bob around in it, Bullmastiffs, just like all dogs, can swim.

They might not like to do it very much, and it isn’t something that they’ll do very often, but they can swim.

And, even though they don’t enjoy it, when it comes to swimming, Bullmastiffs have a hidden weapon in their biological arsenal – webbed paws.

Bullmastiffs’ webbed paws give them the extra edge that a dog their size needs to paddle around, and swim.  So just because Bullmastiffs don’t swim, it doesn’t mean that they can’t swim. They can.

Everything about a Bullmastiff’s personality and all of the inherent qualities of the breed, make them cuddle monsters.

Kind-natured, loving, affectionate, and intensely loyal to their families, Bullmastiffs enjoy nothing more than curling up on the couch next to their humans and spending long days cuddling and soaking up all of the attention that they can get.

They may be big, bouncy, and playful, but under the surface, they’re just gentle giants who love to cuddle and be cuddled in return.

Why Do Bullmastiffs Lean On You?

There are two major reasons why your Bullmastiff leans on you.

The first is that like all dogs, they are pack animals and enjoy close physical contact with other dogs and the members of their pack or family.

When a Bullmastiff sits next to and leans on you it’s a sign of affection and their desire to be as close to you as they possibly can.

The second reason is related to the guard instinct that all Bullmastiffs have.

They were originally bred to be guard dogs, and when a Bullmastiff leans on you, it is essentially body blocking you or putting itself between you and any possible threats or danger that might rear its ugly head.

Your Bullmastiff leans on you because he loves you and wants to protect you.

No, they’re no more dangerous than any other dog is. Despite their size and intimidating presence, Bullmastiffs are actually gentle giants who are more suited to life indoors spent lazing around on the couch than one in which they’re left to roam the streets or are chained up in a yard.

How Much Do Bullmastiffs Cost?

Are you sitting down? Are you comfortable? Good, because the average pedigree Bullmastiff puppy bred by a licensed and recognized breeder costs around fifteen hundred dollars.

It’s an eye-watering and jaw-dropping amount of money,  but if your heart is set on owning a Bullmastiff, what does money matter compared to the joy that a Bullmastiff will bring into your life?

Having said that, a lot of Bullmastiffs are bought on a whim and later surrendered to animal shelters and charities when their would-be owners are faced with the harsh reality of what’s actually involved in caring for and looking after a Bullmastiff.

So before you buy a puppy, it might be worth ringing your local shelters to see if one is looking for a new home. After all, it’s always better to adopt than shop.

What Is The Difference Between A Mastiff And A Bullmastiff? 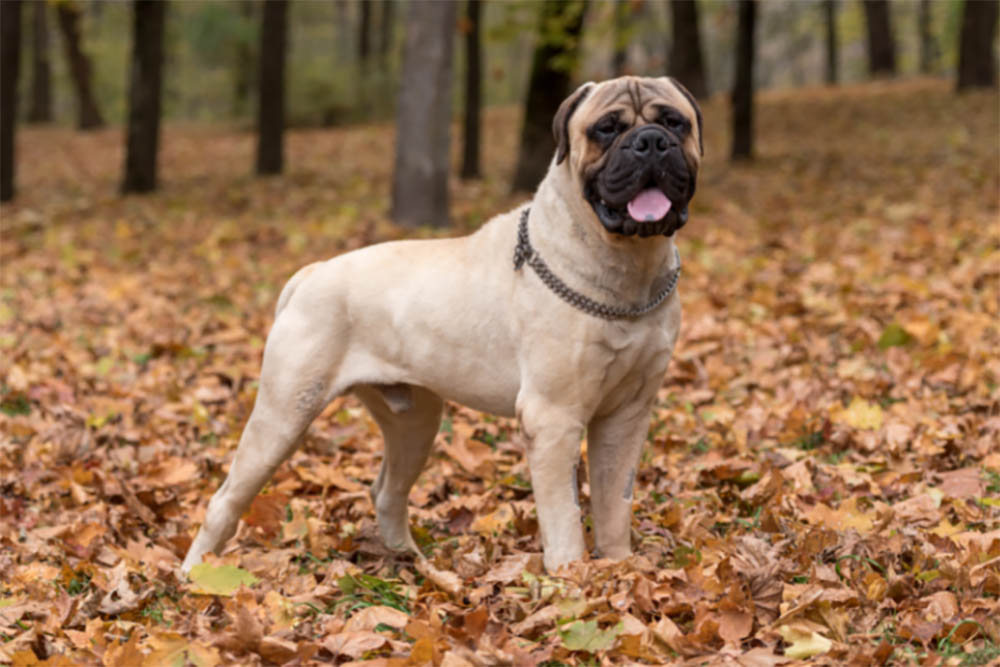 There are surprisingly few differences between Mastiffs bar the glaringly obvious one, their size. For instance, the English Mastiff is the largest dog breed recognized by the American Kennel Club and can grow to up to two hundred and fifty pounds, which makes it a far larger dog than the Bullmastiff.

Bullmastiffs also tend to be the most playful and energetic mastiff breed, which makes them a little more demanding than their English cousins.

Just like Bullmastiffs, English Mastiffs are intelligent, easy to train, and are hardworking and fiercely loyal dogs.

They share most of the same breed characteristics as Bullmastiffs which means that they need to be socialized and trained early in their lives but as they’re clever dogs, they take to both like a duck to water.

At What Age Do Mastiffs Stop Growing?

Mastiffs aren’t like most dogs. By the time they’re eighteen months old, most dogs have stopped growing and are as big as they’re ever going to get.

But at eighteen months old, a mastiff is still growing and he won’t stop growing for another six months. It takes the average mastiff around two years to stop growing, and some owners have reported that their dogs didn’t reach full size until they were nearly three years old.

Even though they’re short-haired dogs and their coats don’t need to be constantly groomed and don’t require intensive maintenance, mastiffs do shed.

In fact, they shed a lot. And when we say a lot we mean a LOT. If you add a mastiff to your family, you’re going to need to be prepared to do a lot of vacuuming, as there will be fur everywhere, all the time.

How Big Do Mastiffs Get?

Standard mastiffs can grow to be around thirty-six inches, or three feet tall at the shoulder, and while females tend to weigh less than males do, mastiffs usually weigh between one hundred and seventy and two hundred and thirty pounds.

Mastiffs aren’t a suitable breed for first-time owners, as they’re large dogs who need a lot of care and attention.

And given the breed’s propensity for stubbornness, they can be difficult to cope with if you’re not used to being around mastiffs or large breed dogs.

Are Mastiffs Good With Kids?

Mastiffs are famed for the love of, and devotion to children.

They bond with children easily and are as devoted to the younger members of their family as they are to the older members.

However, they’re not the best choice of dog to have around toddlers or small children, as their size and build can make them dangerous if they bump into, or want to play with the tiniest members of their new pack.