Bearded dragons are some of the most unique pets that you’ll find in your local pet store. They’re easy to care for, and they make great companions.

They’re certainly different from the normal pets that you expect to see in a pet store such as hamsters or bunnies, that’s for sure!

One of the things that set them apart from other traditional pets is how and what they eat.

Whilst cats and dogs are pretty unremarkable (outside the occasional humorous over-eagerness or tumble), bearded dragons have a very unique way of eating their food. 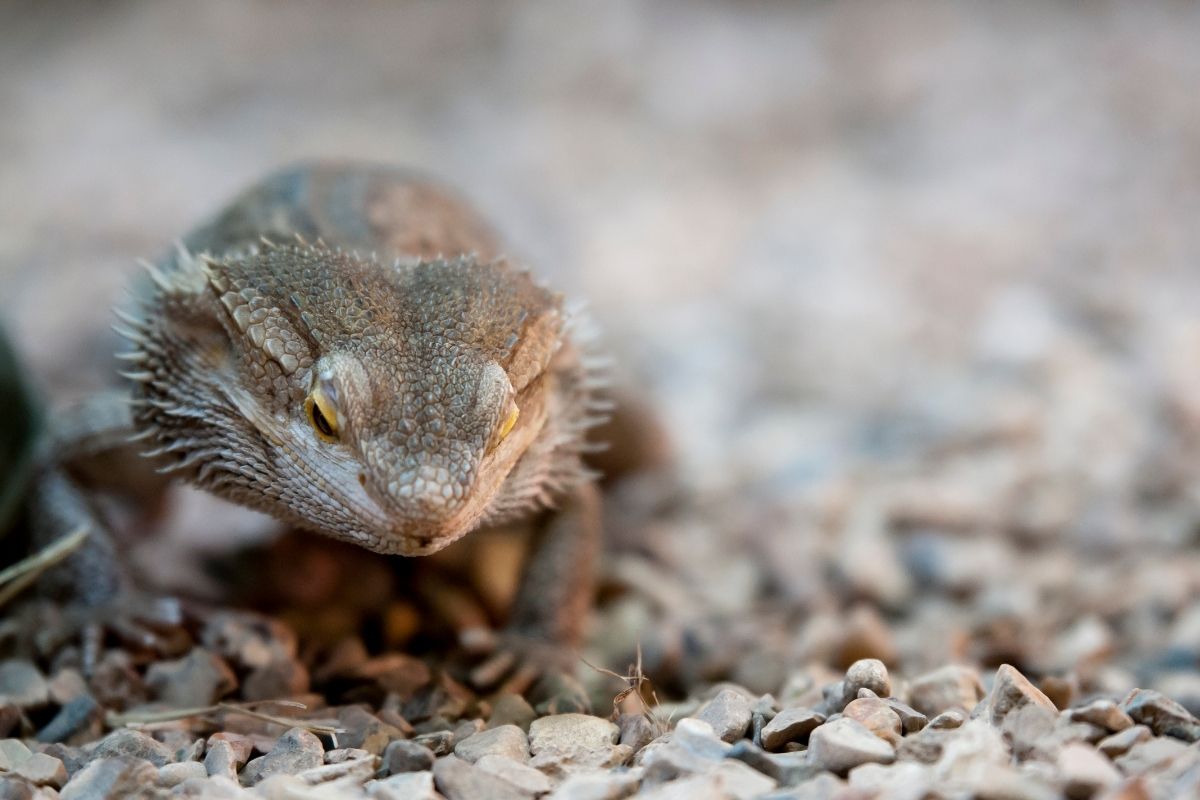 Sure, cats and dogs and plenty of other pets eat meat all the time, but the fact that bearded dragons tend to actively hunt the insects and food that is put in front of them makes them stand out from other pets.

Furthermore, bearded dragons tend not to be fussy when deciding what they eat. They will happily munch on just about anything that’s put in front of them.

This means that you don’t need to worry too much about what type of insect you put in front of them, so long as they get regular nutrition from them.

This brings us to our next point: Are there any insects that aren’t safe for them?

It’s a very reasonable question to ask. You don’t want to try and get rid of the critters and spiders in your home by feeding them to your beloved bearded dragon, only for them to become sick or poisoned the next day!

Well, that’s what we’re here to discuss. We’re going to cover the diet of a bearded dragon, and whether or not they can eat everyday insects such as spiders.

We’re also going to cover a few species of spiders that we know for sure aren’t healthy for your bearded dragon to eat.

The Diet Of A Bearded Dragon

As mentioned previously, you must understand exactly what foods your bearded dragon eats.

It could be that you’ve been raising one for years without knowing this information, and suddenly you read an article online saying that your bearded dragon isn’t getting enough nutrients in its diet, and that food that you previously thought was off the table (or food bowl) for them turns out to be a perfect source of nutrition for their reptilian bodies!

This is the food source that most people will be aware of for their pet bearded dragon and where they will get most of their nutrients and activity from.

This is in line with how they behave in the wild, where food such as crickets, king worms, and mealworms will make up more than 70% of their normal diets.

If you do decide to feed them these types of insects, then you should stick to the smaller-sized ones. These will be the easiest for them to consume.

These smaller sizes will ensure that your bearded dragon has no trouble consuming them. However, if you were to give them something too large, then they may struggle to digest them properly.

This will be the secondary food group that your bearded dragon gets their nutrients from.

Vegetables such as carrots, peas, and spinach are good sources of vitamins and minerals and are great for helping your bearded dragon keep its health and vitality high.

Whilst your bearded dragon doesn’t need a lot of vegetables in the diet, as they do still need the exercise that hunting live insects and bugs gives them, it’s still really helpful to provide them with some as a part of their regular diet.

This is a tricky one for your dragon. Certainly, the high water content of many fruits is ideal for bearded dragons.

However, the high acidity of some fruits may be difficult for them to digest properly.

If you are going to feed fruit to your reptilian companion, make sure that it is not regular, and stick to more solid fruits, such as apples.

Now we come to the big question of this article. Are spiders safe for your bearded dragon to ingest?

Well, the short answer is yes, they can eat spiders. But, just like any other insect, spiders have different stages of development and maturity.

Some of them are small and easy to swallow, whilst others are much bigger and harder to chew through.

Generally speaking, however, the common house spider that you are likely to find scuttling around your home will not pose a danger to your bearded dragon’s health.

The biggest concern would be if you had a particularly aggressive species living within your home. 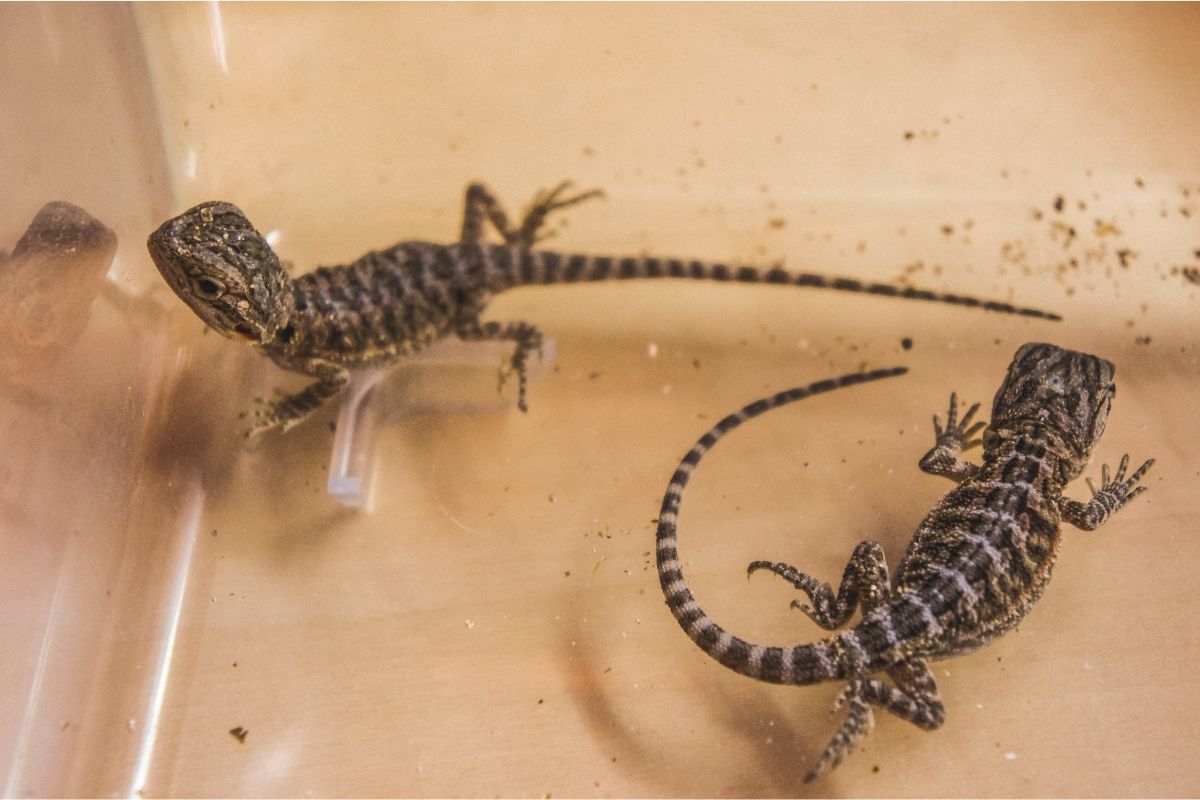 Spiders That You Should Not Feed To Your Bearded Dragon

As mentioned above, there are plenty of different kinds of spiders that you can feed your bearded dragon from time to time. But, you don’t want to do so unless you know what kind of spider you’re feeding them.

The following are all examples of spiders that you shouldn’t feed your bearded dragon:

The brown recluse spider can be distinguished from more common species by the pattern they have on their backs, which looks a little like a violin.

They also have twelve eyes, making for six pairs, which only adds to the eeriness that spiders often have with people.

They are typically found hiding under logs or rocks during the day, but when night falls, they become active hunters.

Their venomous bite is very painful and can cause severe tissue damage, which can pose a massive problem for your bearded dragon if you somehow manage to get one of these arachnids in your lizard’s cage.

Given that their bites can be incredibly painful to full-grown adults, you can imagine that a bite from this whilst your bearded dragon tries to hunt it could easily turn fatal.

You should also be careful letting your lizard run around storage boxes and cool corners of your home, as that’s where brown recluses tend to live if they are in your home.

Probably one of the most famous of all dangerous spiders, the black widow is quite a shy creature. It hides away in dark places, preferring to avoid humans at all costs.

Easily recognizable by the hourglass shape on their abdomen, you’ll easily know which spider it is just by looking at it.

However, when provoked, they may strike out aggressively. This makes them a potential threat to your bearded dragon, who might mistake them for prey.

Black widows also produce an extremely potent venom that can cause serious problems for your reptile.

And not only that, but they are also poisonous to touch, meaning that even if your bearded dragon manages to avoid being bitten whilst hunting it, there is a good chance of your lizard friend dying from the poison afterward.

Since they prefer to stay hidden away in dark spaces, you’ll need to make sure that your bearded dragon doesn’t accidentally fall into any gaps between floorboards or behind furniture.

Quite a common type of spider to find in and around your home, the hobo spider has earned its name due to living in many sorts of places, from outdoors in tree trunks and lumber, to woodwork in your home.

It is quite a large spider, measuring up to 2 inches long, and is usually brownish. Hobo spiders are generally harmless to reptiles, although they can sometimes irritate with their bites.

A few other things to note about hobos is that they are nocturnal hunters and will hide themselves away during the daytime hours. Also, they do not build webs, instead relying on camouflage to blend in with their surroundings.

Although harmless enough when left alone, they will still give you a nasty bite if they feel threatened.

As such, you should keep an eye out for any signs that your bearded dragon is feeling ill after eating one of these creatures, as it could indicate that they’ve been bitten.

If your lizard does seem unwell, though, then it would probably be best to take him to see a vet.

They’re not aggressive towards humans, but they will often bite if they feel threatened, especially if you come near them on their web.

These spiders are fairly small, measuring roughly 10 millimeters long at most. Although they look similar to tarantulas, especially with their large mandibles, they aren’t related to them at all.

As such, they have a rather strong sting that can be quite painful. If your bearded dragon gets stung by one of these, he’ll likely start shaking his head and flailing his limbs uncontrollably.

He might also try to escape from his enclosure, so check on him regularly to ensure that he’s okay.

Hopefully, this guide has helped you get a better idea of what types of spiders you should avoid keeping around your bearded dragons.

You don’t want to put yourself or your dragon in danger by feeding them something that could potentially harm you both, and you definitely don’t want to leave them vulnerable to getting attacked by a spider either!

The next time you walk past a hole in the ground or under a log, think twice before taking a closer look. There are plenty of other dangers lurking underneath those logs and holes, like snakes, lizards, or scorpions.

So remember: Keep your eyes open, and always watch over your bearded dragon’s health.