There are not many species that are as diverse as the turtle.

They live in most areas of the world and there are over 300 different species of turtles. Most live in tropical areas, although some species can survive in colder climates.

Most of these species look different – they have different patterns on their skin and shells.

Tortoises and Terrapins are also species of Turtles.

Many cultures have been fascinated by Turtles because of their long lifespan, slow movement, and striking shells.

They have been heavily featured in myth and legends, hunted for their meat, and been kept as pets for thousands of years.

On the island of St Helena, there are one resistant species that is around 190 years old. His name is Johnathan and he is a Giant Tortoise.

When Johnathan was born, Queen Victoria was a teenager and Andrew Jackson was president.

There is a good chance that Johnathan is the oldest creature alive on the planet right now!

Turtles come in all shapes and sizes, they also come in an amazing range of colors too. Some turtles even have vibrant patterns on their shells.

The easiest way to identify what species a turtle is is by looking at the markings on its shell, face, and legs. In this guide, we will help you to identify a few of the most beautiful species of turtles from around the world.

Why Are Different Species Of Turtles Different Colors?

When you compare some of the different species of Turtles, you would be forgiven for not knowing that they were all part of the same family.

Like many species that have subspecies across the whole world, there is a huge range in looks, shapes, builds, and size amongst Turtles. But, why is this the case?

Well, the answer is simple – evolution. If you want to learn more about the effects of evolution then Turtles are a great case study.

Turtles live in nearly every part of the world. To survive in these areas they have had to adapt over many years.

For example, in the Galapagos Islands, Turtles did not have very many predators so they were able to find a lot of food and grow large. This is why we have Giant Tortoises there.

Terrapins on the other hand, mostly live in the Gulf of Mexico where they have a lot of predators. They really benefit from being small, fast, and having very sharp beaks.

Can A Turtle Change Color?

Turtles don’t change colors in the same way as chameleons do – however, throughout their lifetimes a surprising amount of turtles do change their colors.

Most of the color-changing happens due to age or when the mating season begins.

A perfect example of color-changing Turtles is the Painted Terrapins that live in Malaysia, Sumatra, and Borneo.

For the majority of the year, these Turtles are a gray color. They also have a set of red stripes that run along their heads – these are a mud red color.

However, when the mating season begins, the skin of the males turns white and the red stripes become a vibrant shade of crimson.

Scientists believe that they do this to help themselves find a better mate. They have not been able to discover another benefit of color-changing yet.

Many other species of Turtle begin life as one color and slowly change color as they grow up.

They typically get darker, and the patterns on their shell become more pronounced.

The North African Painted Turtles are an example of a species of Turtle that stays the same color for its entire life.

Do Albino Turtles Exist? What Causes Them?

Humans aren’t the only species that can be born Albino. While they are very rare and the issue is less common in Turtles than it is in humans – Albino Turtles do exist.

Typically, Albino Turtles are completely white. They may have red or yellow eyes.

Albino Turtles typically do not last as long in the wild because they are easier for predators to spot. For this reason, it is almost impossible to find them in the wild.

If you are interested in seeing an Albino Turtle then your best option is to go to a Turtle sanctuary or to a zoo.

Many collectors see Albino Turtles as a novelty or something rare to add to their collection. For this reason, they can be very expensive and can be removed from the wild in order to sell on for a profit.

Albino turtles may grow more yellow as they get older and are exposed to the sun.

The Colors Of Turtles 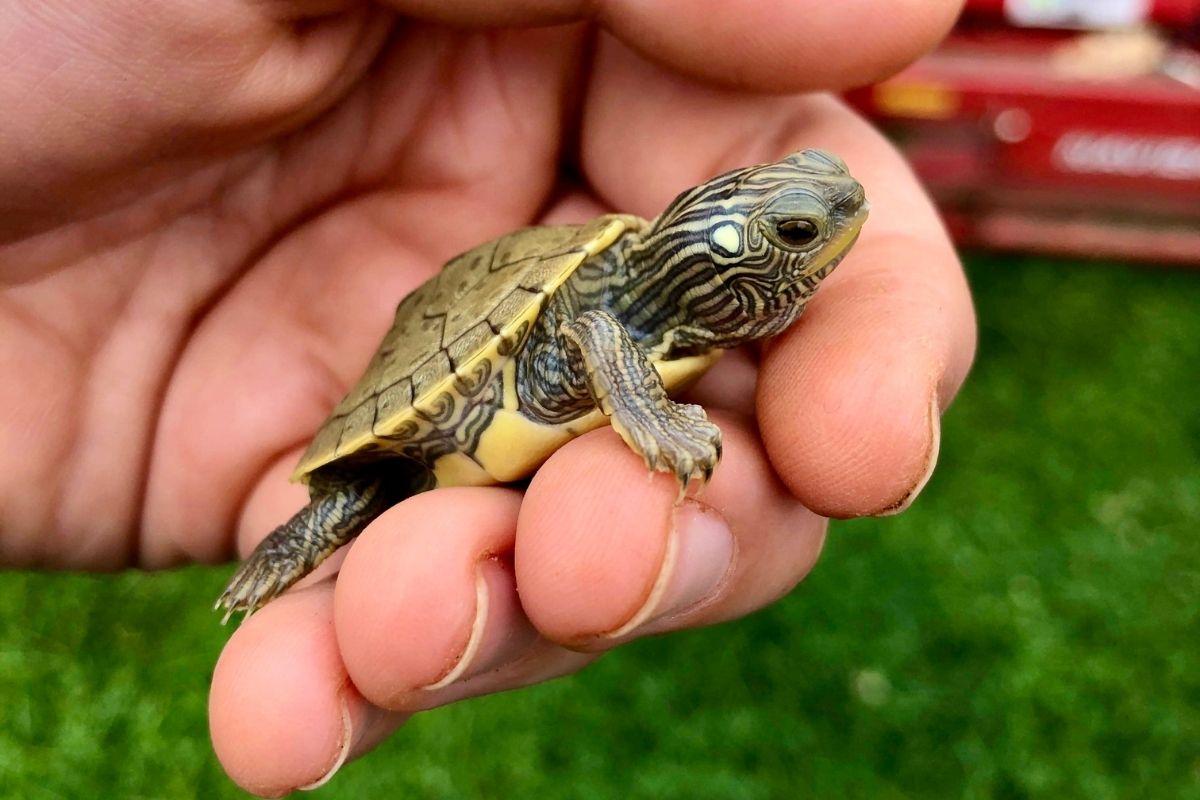 These Map Turtles have intricate patterns on both their shell and skin. They also have spikes that protrude from the edge of their shell.

Their skin is typically a black or dark green. They are then covered in white and yellow stripes from head to toe. They typically have stripes that match the color of their eyes.

On each section of their shell, they have a spiraling pattern that is typically compared to typographical marks on a map. Hence the name Map Turtles. 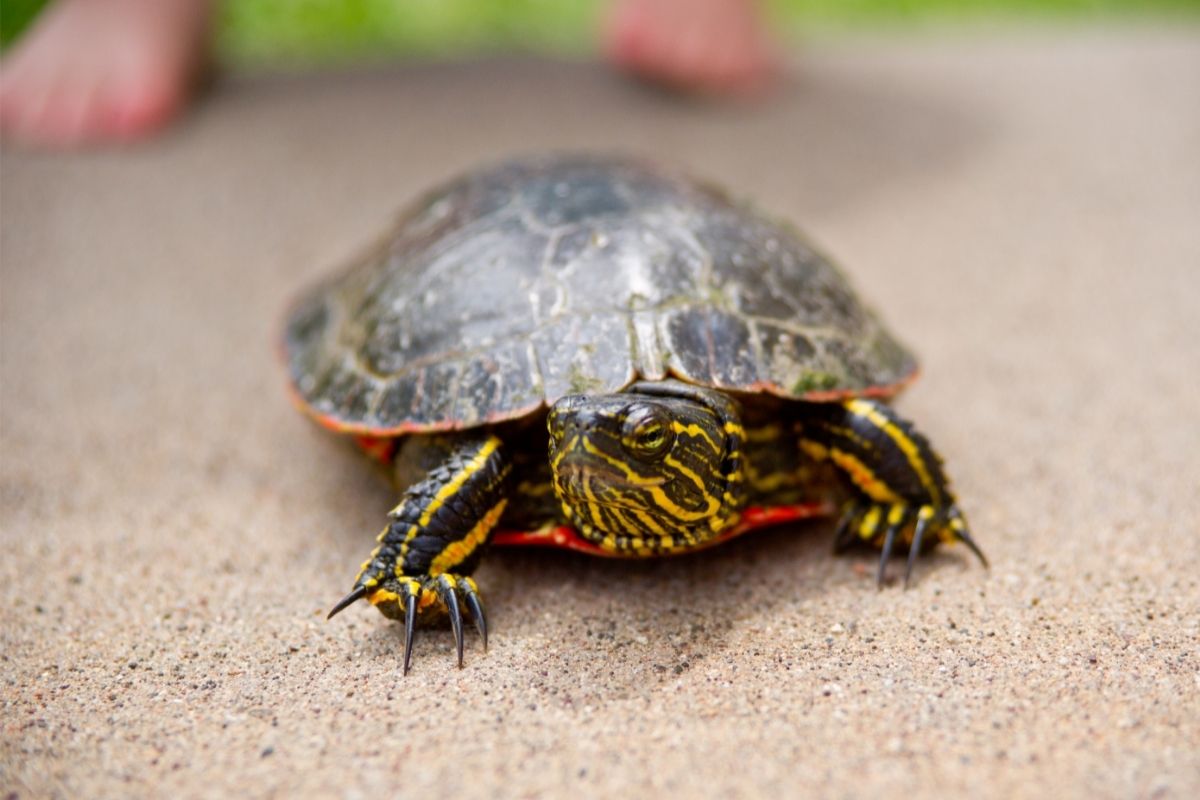 These are freshwater turtles that can be found in North America and some parts of Mexico. They are slow-moving and are part of the Pond Turtle family.

While they may not look very exciting at first glance, it is worth taking a closer look at the Southern Painted Turtle. Their skin and eyes are dark green, brown, or even black in some cases.

However, on their shells, they will often have brilliant orange stripes and twists that highlight the ridges on their shells. Some have lots of orange marks, others only have one or two. 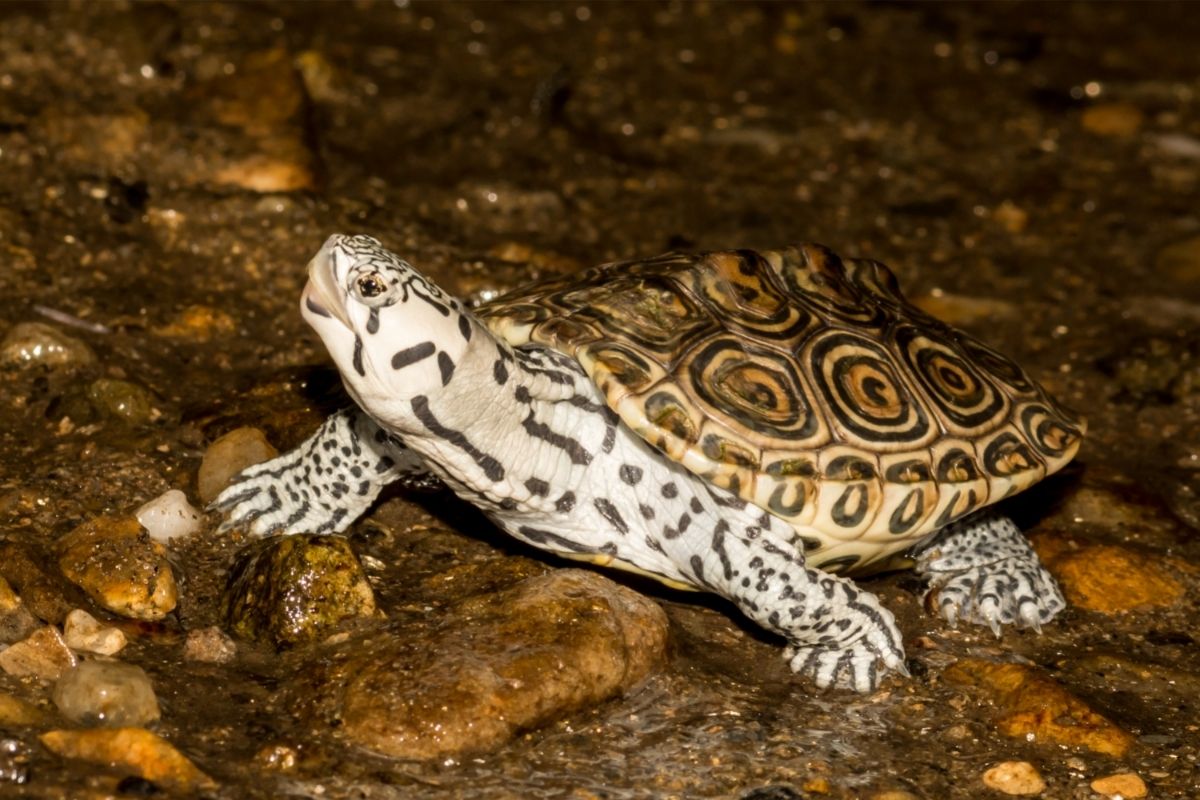 These Turtles can be found in Canada, the US, and in some parts of Bermuda. They are small and their looks vary greatly from Terrapin to Terrapin.

These Terrapins are amazingly adapted to their environment – they can thrive in both fresh and saltwater environments. Their skin is nearly impervious to salt.

Diamondback Terrapins typically have gray skin with dark green and black spots across them. They have dark eyes and a yellow, white beak. Their shells have swirling patterns, including black, green, orange, and yellow stripes. 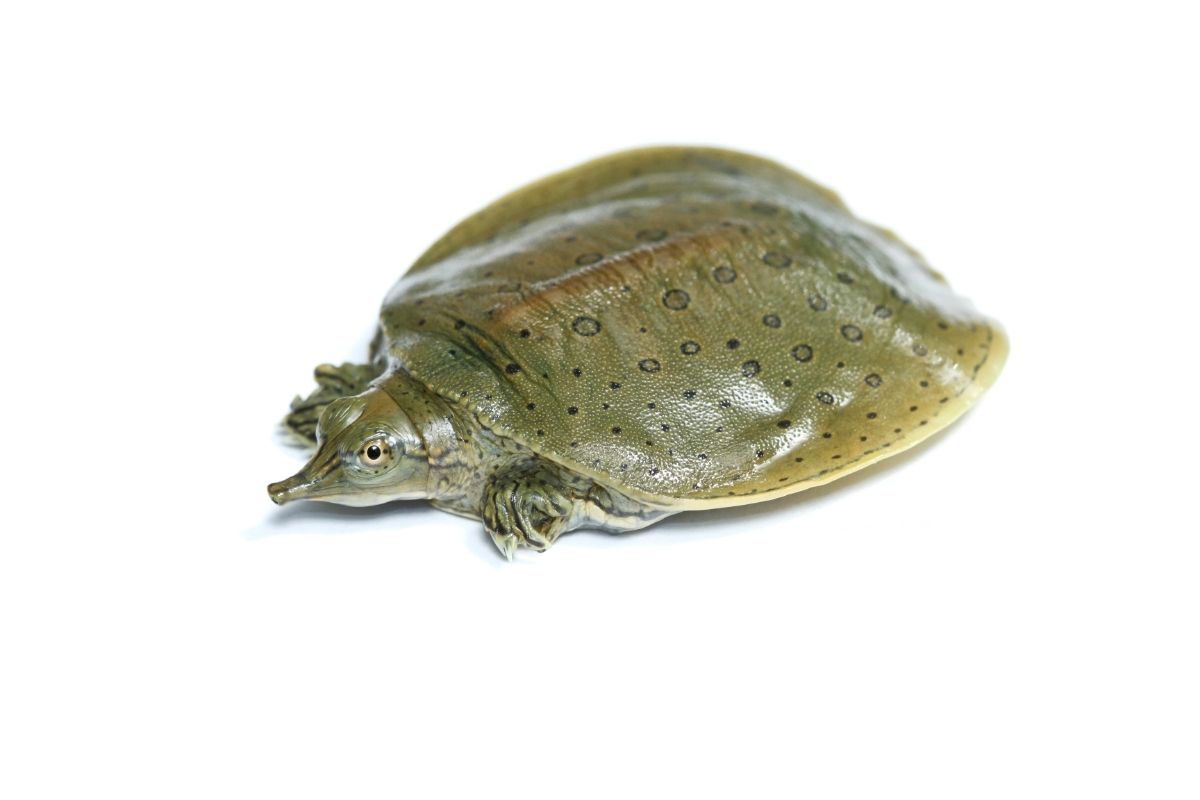 The Spiny Softshell Turtles live in freshwater in different areas across America. You probably won’t be shocked to hear that they have soft, shiny shells.

Unlike the Turtles that we often see in the media, these Turtles have shells that are fairly flat and they are colored to look like a moss-colored rock.

They have more yellow and olive tones in their shell compared to the forest green-colored Turtles that live further North.

Their skin is often a little bit darker than their shells. It can be gray or dark brown. 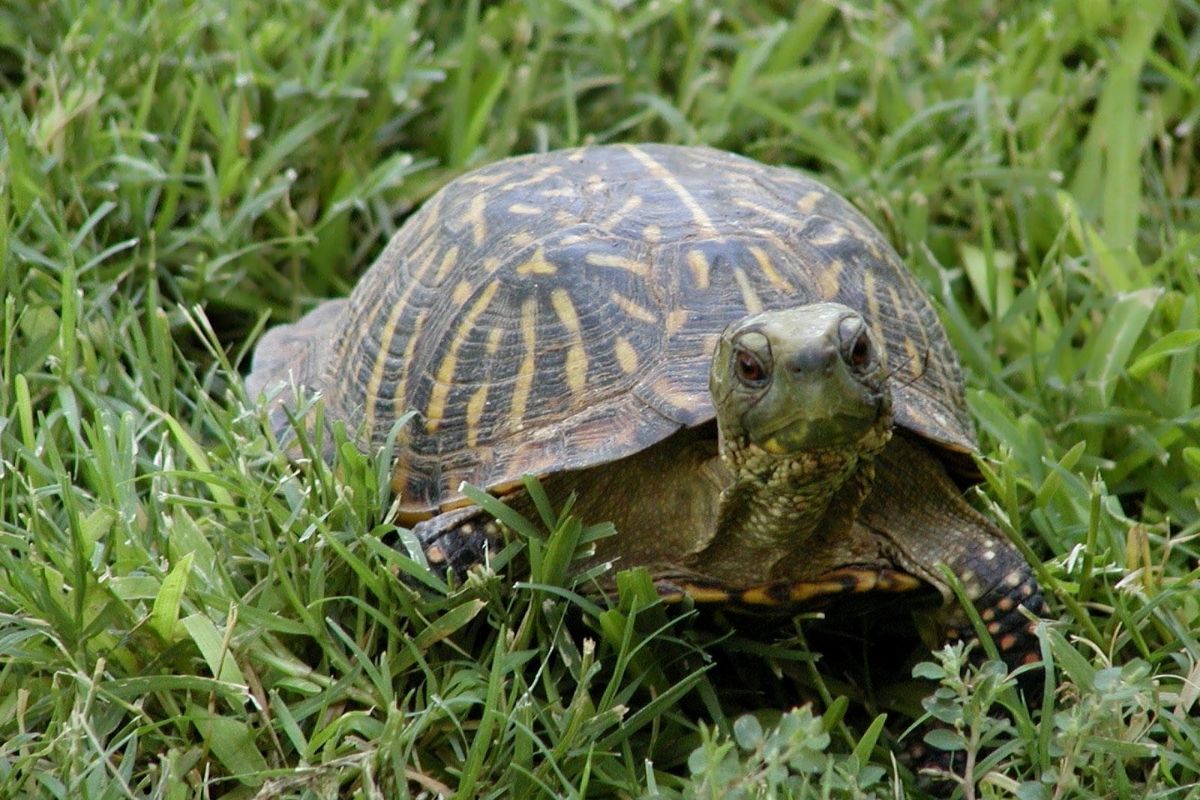 These are very small Turtles that are native to the Great Plains of the United States. They live in the grasslands, they are freshwater Turtles, and they like to burrow.

Because they live in a mixture of sandy areas and grasslands these Turtles have a mixture of colors on the back of their shells.

Their skin is typically green and brown with orange spots on their front legs. Unlike other Turtles, they have stripes on their shells rather than swirls.

This is thought to mimic the grasslands around them to make them harder to spot from above. 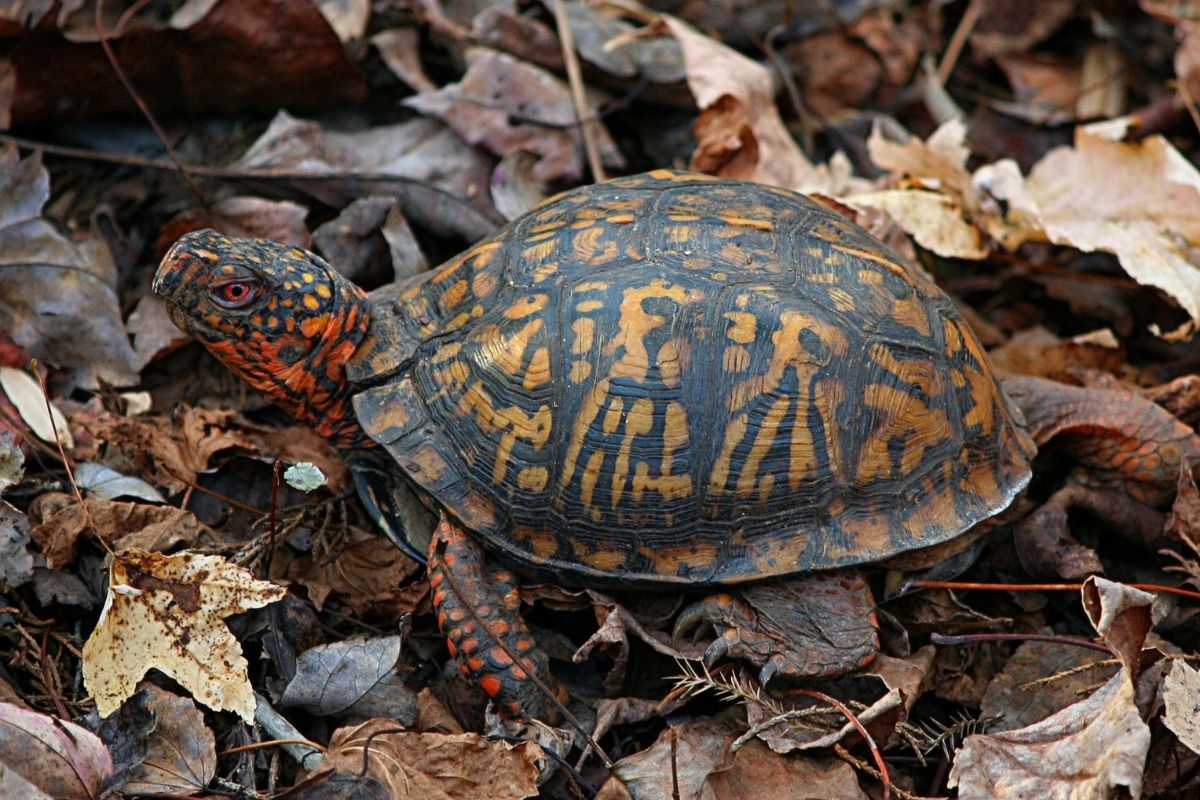 The Eastern Box Turtle is a land Turtle with a hinged shell. They are found in the Eastern parts of the United States. They are one of the most common types of box turtles in the US.

They are incredibly popular because of how striking they look.

Eastern Box Turtles typically have orange skins with brown spots on their face and front legs. Their shells are also mostly orange with patches and stripes of brown spread across them.

They are a small species of Turtle and they are burrowers. 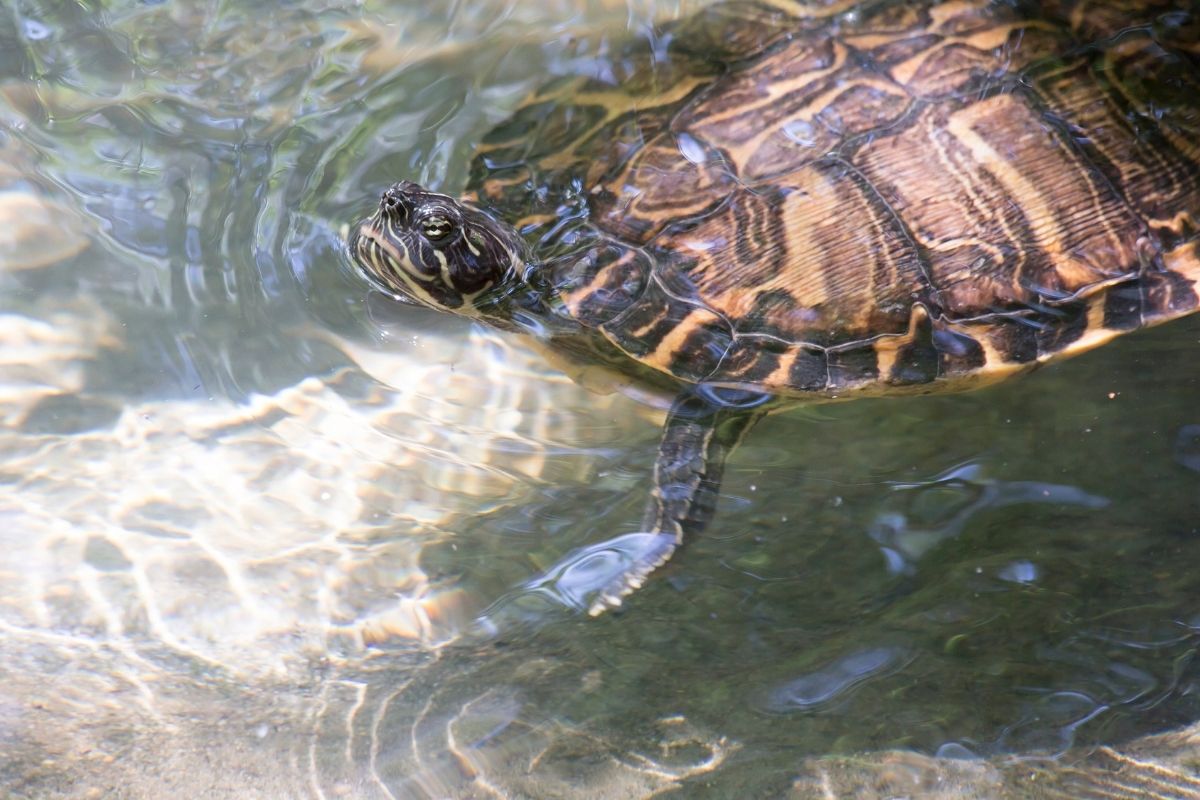 These are freshwater Turtle that lives in swamps all over the Southern United States. There are a few different types of River Cooter, but the Hieroglyphics are the most ornate.

These turtles can have dark or yellow eyes. Their skin is typically a swampy green, they tend to have yellow stripes across most of their skin.

Their shells are small and very domed, and the pattern on them is detailed.

The base color of the shell is usually dark green (although it can be a yellow-green), and the swirls on the shell are tight with alternating dark brown and bright yellow stripes.

These might be the scariest type of Turtle and you certainly don’t want to meet one of these in the wild. They are huge and they have an incredibly strong jaw.

Alligator Snapping Turtles have a spikey shell that is typically one color, on the darker side, and has no pattern. Their skin is also quite dark.

These Turtles do not have many predators and therefore they do not need to camouflage themselves except when they are hunting. 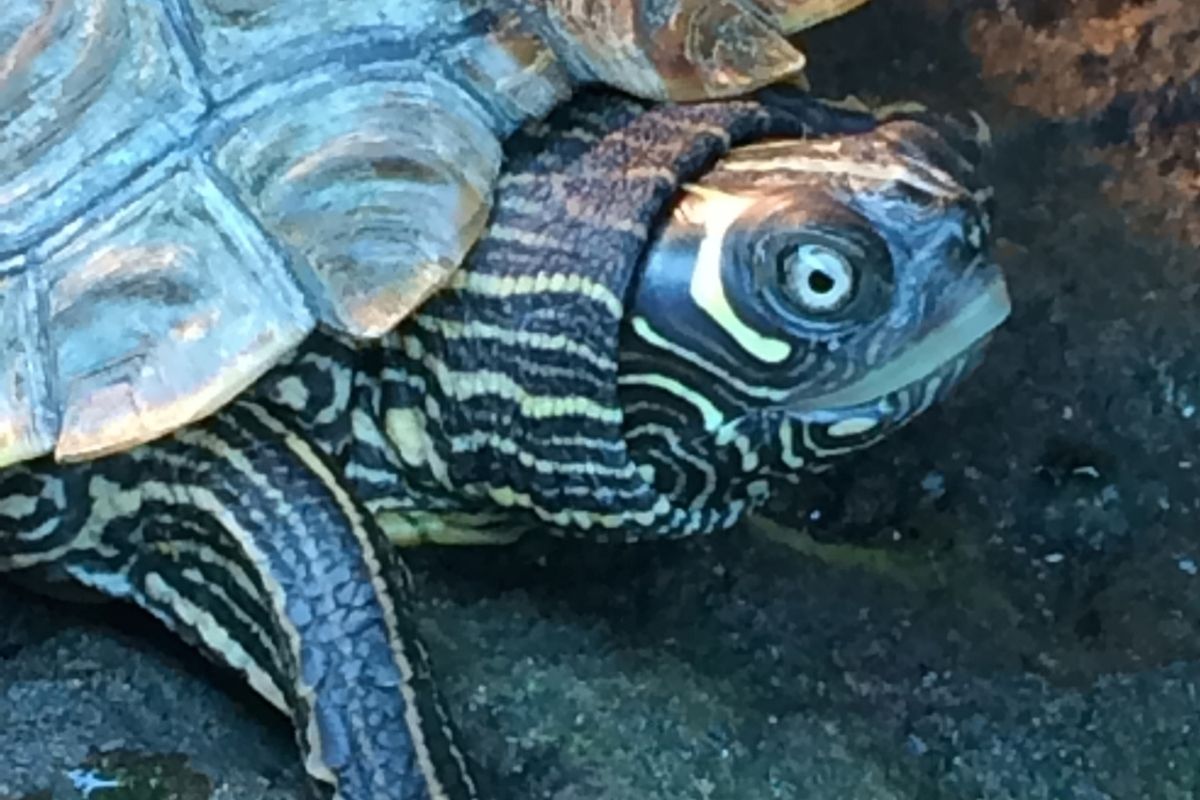 These Map Turtles are the exact opposite of the Alligator Snapping Turtle in many ways.

They are very small and well camouflaged. They have a lot of predators and are good at hiding – except when they are trying to sun themselves on rocks.

They are typically green-skinned with white, yellow, or cream spots and stripes across their faces and front legs.

Their shell patterns are very similar to the Sabine Map Turtles. They are tight-knit swirls that do greatly resemble the shapes you would see on a map.

They are native to Texas. 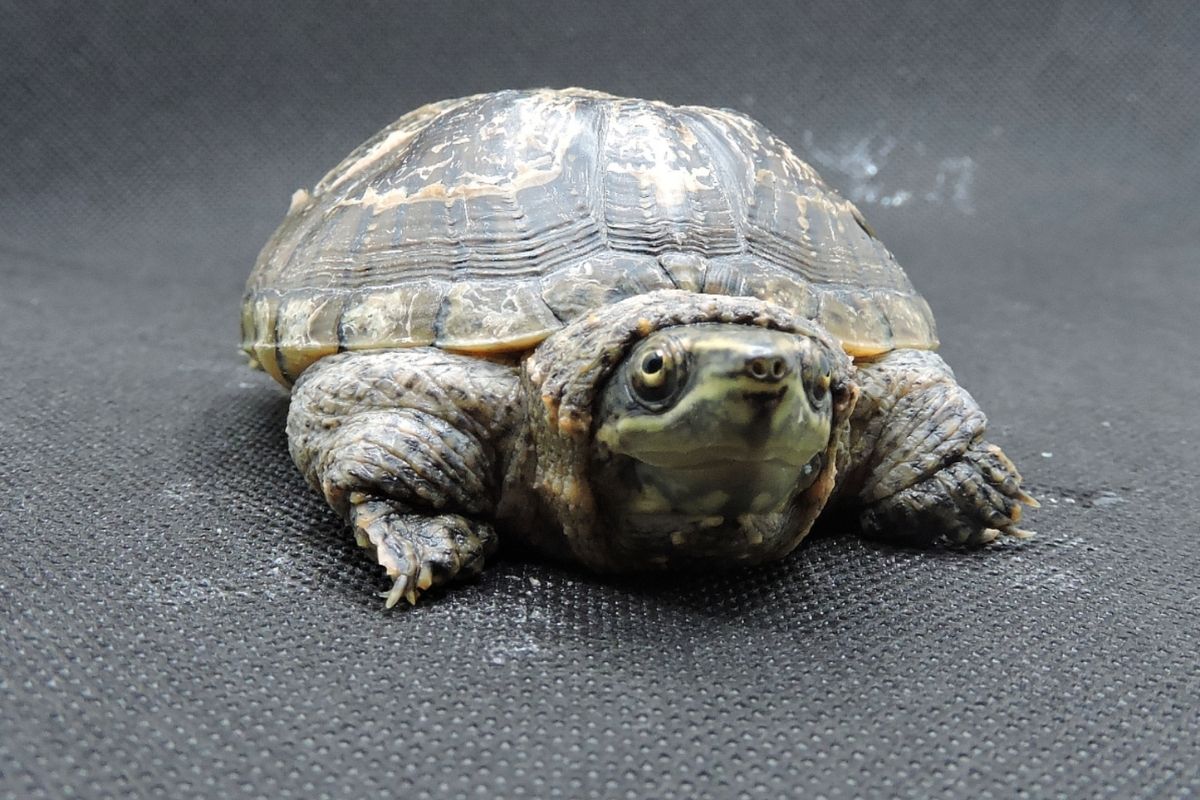 These are Mud Turtles that live on the East Coast of the United States. They are very small and are typically hard to spot in the wild.

They got their name from the fact that they release a very intense and musky odor from glands on their neck to scare away predators.

They are also known as skunk Turtles and slipknot turtles.

They are typically dark green all over and occasionally have brown spots on their shell and skin. Their shell is very round and can cover a good part of their head.

They are very small, the biggest Musk Turtle found was only 14cm long.

With over 360 different species of Turtles roaming the world, it is no wonder that they come in a range of sizes, shapes, and shades.

This surprises many people as Turtles are typically depicted as being green with hexagonal patches on their shells. While some Turtles look like this – most don’t.

Most Turtles have different colors on their shell and skin because they are adapting to the area that they live in or they are trying to scare off predators.

Turtles are one of the most amazing species on earth – they can live for well over 100 years and they look great doing so.