There are few things as good in life as cuddling up on the couch with your furry best friend. Whether it is for an afternoon snooze, or during a movie, having some quality time snuggling your dog can be a great way to relax, chill out and feel a sense of serenity.

We are here to explore some of the reasons why your dog puts its head on you, other dogs, or why they burrow into you.

What does it mean when a dog puts its head on you?

If you have a dog that likes to rest their head on you, lay it on your hands, feet, knees, or lap when you are sitting down, then you have probably wondered what they are trying to say to you. Whilst it can be a sign of affection, it does depend on the context.

For instance, if your dog only does this when there is food around, or it is dinner time, then resting their head on you is a means of getting your attention, working the puppy dog eyes, and praying that you get up and feed them!

On the other hand, for most dogs, cuddling, nuzzling and leaning into you is your dog’s way of telling you how much they care about you. For instance, dogs cannot hug you back when you hug them, but they can use their body language to communicate their feelings with you. Dogs will lean their body against yours as a way of showing affection and how much they trust you entirely.

In other cases, dogs can rest their head on your knees, nuzzle their nose into the crook of your arm, leg, or even go between the thighs to show that they trust, respect, love and care for you. In other words, if your dog nuzzles and lays its head on you a lot, then it is simply showing a connection with you, giving you some affection and showing how much it loves you.

Some dogs may push their heads up against you, or into your chest. This is often another way of being affectionate with you. On the other hand, you may have rewarded or responded well to this behavior before, and so the dog is simply hoping to get something back off you. Other dogs do this because they are anxious and seeking protection, whereas some may be trying to spread their scent onto you to become more attached to you. 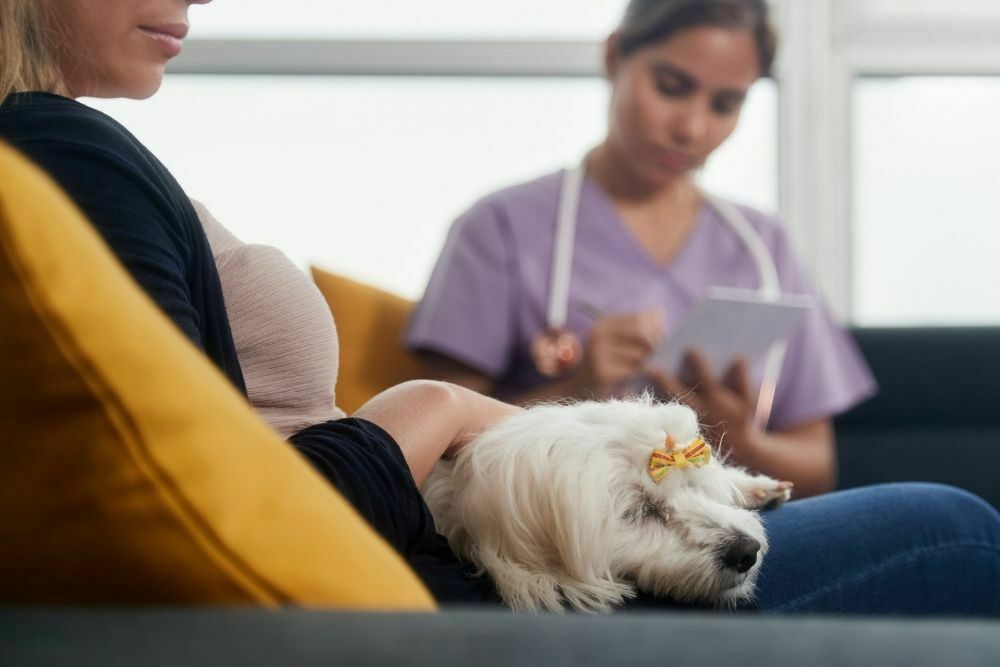 What does it mean when a dog puts its head on another dog?

In most situations, if a dog is displaying odd behavior around another dog, it is usually to assert authority over them. Dogs naturally try to dominate and become the Alpha around other dogs, and so when they play together, you may notice them acting in a different way.

A great example of this is if your dog stares at other dogs, tries to sit on them, or puts its head on them.

To prevent this from happening too often, or becoming aggressive, it is a good idea to properly socialize your dog with other dogs, and with people too. However, most of the time, it is just an instinct, and will not actually result in aggression or violence.

Why do dogs burrow their heads into you?

Some dogs love to burrow. Whether it is in the arm, into your body, or by rubbing its head into your legs, they love to bury their faces into you. Although, sometimes dogs can burrow into the crotch, and they will do this with their owners, frequent visitors and strangers that come into the home…which can be a little embarrassing!

So, why do dogs burrow their heads into you? Well, the answer is often a lot sadder than you think. Most dogs that do this may be suffering from anxiety, fearfulness or sadness.

By burrowing into people, a dog may feel a sense of comfort, protection and safety. If your dog does this to you, then it may be because they feel safe burrowed into you, and that you are their leader and protector.

Other dogs may do this because they have separation anxiety, and simply want to be as close as possible to you, which is why they may burrow into your arms or between the legs…you can’t get any closer than that!

Another possible reason that your dog burrows its head into you is to spread its scent around you. This, again is to strengthen your bond, and create a closeness between you and the dog.

Finally, your pet may like to burrow its head because it gets rewarded. This does not always mean treats, as sometimes they just love to be petted. When a dog buries its head in you, you will most likely respond naturally by petting them or rubbing their head. This can be enjoyable, and so your dog will do it time and time again as a way of getting some attention and affection!