Their sweet and loving nature makes an English Bulldog one of the most popularly sought-after breeds. However, though it may be unknown to some, they can experience a lot of difficulties during pregnancy and labor, with many struggling to give birth naturally.

The high demand for this breed is often reflected in the price that they are sold for and although this is a financial benefit for those that breed them, it is important to account for any difficulties that the dog may endure during the whole process from conception to delivery.

If you have an English Bulldog which you are considering breeding, you may be interested to know what the average size of a litter is. Generally, an average-sized English Bulldog gives birth to around 3 to 4 puppies. In some instances, the litter may exceed 4 puppies, however, bigger litters can lead to serious health issues which can affect your dog and the puppies.

Most dogs will have a litter consisting of at least 2 puppies or a maximum of 10. The exact figure is dependent on several factors, this includes the breed of the dog and their size. Diet and nutrition can also influence the number of puppies in a litter. Despite their sturdy and stocky build, in comparison to many other breeds, the litter of an English Bulldog is rather small.

How many times can an English Bulldog be bred?

To avoid health problems, an English Bulldog should only be bred 3 times. Breeding them more than this can result in painful health issues. Due to the large size of English Bulldogs, they have shorter lifespans than many other breeds. On average, they are expected to live for around 8 to 10 years.

Female English Bulldogs will come into heat every six months and this cycle can last for between 3 to 17 days. Breeding your dog during its first heat cycle is not recommended. As a single fertilization period tends to occur once every six months, it is recommended that you spread out the breeding process, rather than breeding them in quick succession of their previous litter. Spreading them throughout their lifetime will be beneficial to them due to possible health problems. Those that are looking for a dog with a long lifespan or the ability to breed large litters may be better suited to another breed.

Although English Bulldogs are more bulkily built than many other breeds, in regards to their actual size, they are smaller. Because of their size, they are not able to carry large litters. Not only do English Bulldogs have smaller wombs, but they also have lower legs than hips. Large breeds, on the other hand, are much more able to cope with a larger litter due to the size of their bodies.

It will also depend on the age of the dog when you breed her. Younger dogs are known to have fewer puppies and their first litter typically tends to be its smallest.

Can an English Bulldog conceive naturally?

Many English Bulldogs are unable to get pregnant naturally. Their stocky body shape and size makes the task of breeding them naturally difficult and as they are front-heavy, it is hard for them to mate without human intervention. For this reason, many will need to be artificially inseminated.

Whilst some breeders may choose to go through the process at home, others may prefer to ask a veterinarian to do it.

Is it possible for English Bulldogs to give birth naturally?

English Bulldogs are recognized for their large heads which makes it difficult for the mothers to birth them naturally. In some cases, there may also be issues relating to pelvic abnormalities which can cause issues with a natural birth. Because of this, an English Bulldog will typically have to have a C section to deliver the puppies and you will find that a higher percentage of them will give birth via a C section in comparison to other dogs. A C section will ensure that the puppies are born healthy and will also reduce the pressure that is put on the mother.

A C section will of course have an impact on your dog’s body so you must allow them time to recover properly before contemplating breeding them again, ideally, you should wait around a year or longer. Following the procedure, they will need to rest and you will also need to take them to appointments at the vets so that they can assess their condition and make sure that they are recovering properly.

Why are English Bulldog puppies sold for such high prices?

Due to the complexities of their pregnancy and the birthing process, English bulldogs are considered to be a rare breed and because of this, they have a high value. Breeders also have to take them for multiple veterinary appointments throughout their pregnancy, where they may often have to undergo procedures. As a result, breeders are likely to charge a higher price to cover these expenses.

Though their faces may suggest that they are grumpy, English Bulldogs are friendly, happy and they will also display extreme loyalty to their owners. Aside from this, they are also deemed to be excellent family dogs. Their character attributes are also responsible for the high price tag because as a breed, English Bulldogs are very much in demand.

Breeding an English Bulldog: what you should and shouldn’t do 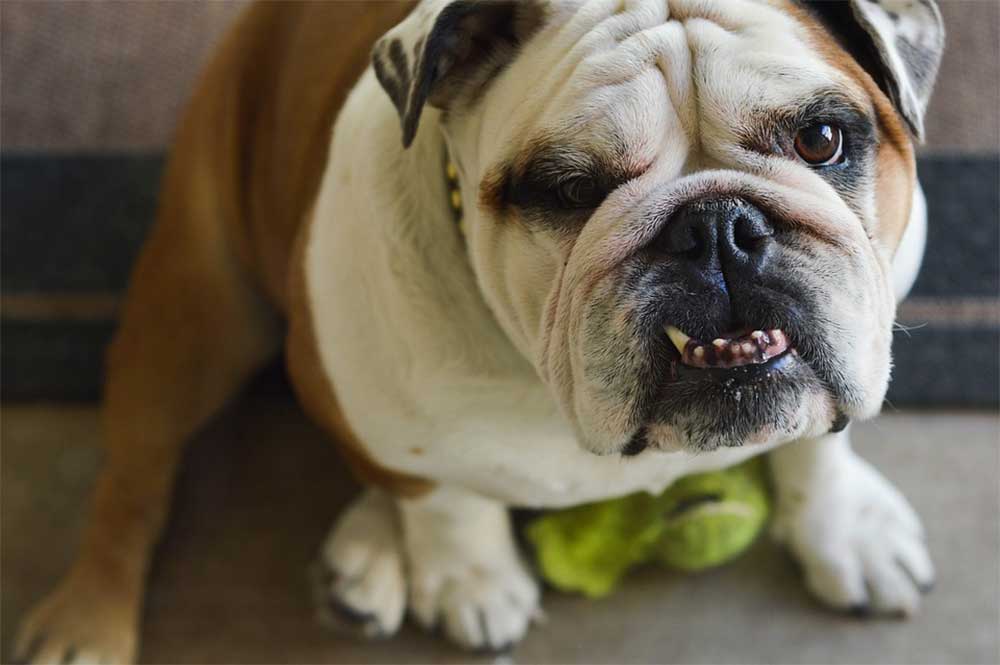 How to identify greedy breeders

As mentioned, some people may decide to breed their dog with the wrong intentions. Instead of focussing on their health and welfare, they will be more concerned about the money that they can earn from each puppy in the litter. Of course, there are other good breeders out there too.

There are several ways of identifying a greedy and unreliable breeder. Considering these factors will help you to avoid purchasing a puppy from them.

If the breeder is unable to provide you with the necessary Kennel Club paperwork for both the parents and the puppies this is a sign that they aren’t reliable or genuine. This paperwork will typically contain information relating to the puppies as well as details about the breeder.

You may also notice differences in the appearance of the puppies. Often, a greedy breeder will not be concerned with the health of the mother but solely their ability to produce a litter. The puppies may look different to usual English Bulldog puppies or they may seem weaker or smaller than normal.

Careless breeders will sometimes attempt to sell a puppy before they have reached the age where they can be separated from their mother. If the puppy looks younger than 6 weeks old, you should refrain from buying it because at this age it still needs its mother.

If the price of the dog seems cheap in comparison to most other breeders this may be another sign that the breeder is not reliable. The breeder may also be hesitant to allow you to see the puppies or you may be alarmed to find them living in poor conditions. For some people, their intuition may tell them that something doesn’t seem right and they may have a feeling of uneasiness after visiting the breeder and the puppies.

If you want a dog that gives birth to large litters an English Bulldog is not the right choice for you, as they typically tend to give birth to a litter of 4 puppies. It is also important to remember that pregnancy and labor aren’t easy for these dogs, so if you are intending to breed your own dog you will likely need to get her artificially inseminated and in most cases, they will need to have a C section to deliver the puppies. If you are going to be buying an English Bulldog from a breeder, look out for the signs that will inform you whether they are reliable or greedy.