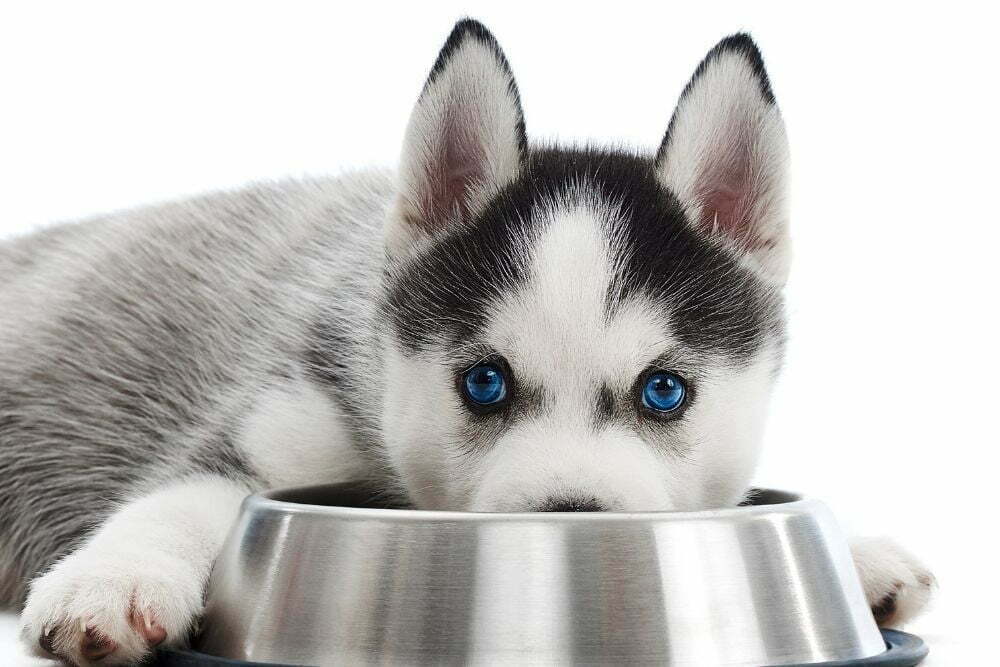 Contents hide
1 How long does it take for a puppy’s eyes to change color from blue?
2 Are all puppies born with blue eyes? Why?
3 What is the most common eye color for dogs?
4 How can you tell if your puppy will have permanently blue eyes?
5 Why do puppies’ eyes change from blue to another color?
6 Can a puppy have heterochromia?
7 In Conclusion

The thing is, we know for a fact that not all dogs have blue eyes, right? In fact, a lot of dogs tend to have brown or dark eyes. So how can that be if they’re all born with blue eyes? That’s because although puppies are born with blue eyes, the eyes will then change color to whatever color they are going to remain as permanently.

This change usually happens 9 or 12 weeks after their birth, so this is roughly the amount of time around which you can confirm the actual permanent eye color! And they don’t always have to change, as some dogs have blue eyes as their permanent color!

But if this is the first time you’re hearing this, you might need more of an explanation and a few more details to confirm the strange change of eye color. Don’t worry, we will answer all the main questions and more, so let’s get right into it!

How long does it take for a puppy’s eyes to change color from blue?

Once they’ve opened their eyes, you will notice that they are either fully blue or blue-tinted. It’s also important to note that although their eyes are open, they won’t have the best vision just yet. In fact, puppies tend to stumble about and bump into things quite often, as their vision hasn’t matured into its full range just yet!

As the vision matures and improves, so will the melanin in the eyes, triggering the switch of color in a gradual slow process. So don’t worry, the eye color won’t just switch overnight! It’s a slow process, and their permanent color probably won’t be fully developed until after 9 to 12 weeks of age!

However, at this point, the puppies should have the full vision to look around and move about, and their eye color should have shifted to its permanent state.

Are all puppies born with blue eyes? Why?

Okay, so there’s a slow process in which the eyes of a puppy change from their initial blue to their permanent color. Easy enough to understand. But why are puppies born with blue eyes in the first place? It’s a pretty big deal that all dogs are born with blue eyes, so a good explanation is needed.

It’s basically due to a lack of melanin, and melanin is the broad term for the natural pigments of coloring found in living organisms. The problem with the melanin in their eyes is that it doesn’t begin to develop until they’re slightly older, and the initial lack of melanin showcases itself by being a very light color, which is most commonly blue, or sometimes a greyish shade of blue.

In fact, puppies don’t even open their eyes for at least a week or two after they are born, so they just kind of nuzzle their way around, stumbling and bumping their way through their first experiences of the world around them. This means that they are essentially blind, until they finally open their eyes,

And when they do open their eyes, their vision still isn’t fully developed, much like the eye color itself. It takes a few weeks for their eyes to adjust and the vision to develop, in which time the melanin also begins to develop, changing the blue color to the actual permanent eye color that they will have for the rest of their life.

What is the most common eye color for dogs?

The most common eye color for puppies is blue, 100% without a doubt. But that’s kind of cheating because all dogs are born with blue eyes, so all puppies have blue eyes before the color change kicks in.

Okay, so once the melanin has had the time to develop, and the puppies finally have their permanent eye color…what color is the most common?

The answer is brown! Most dogs have brown eyes, although the brown can come in many different shades, with darker browns and lighter browns, depending on each dog and each breed of dog. A darker brown color can also sometimes look black in certain lighting conditions, so a lot of people will claim that their dog has black eyes, even though it will actually be a very very dark brown.

So yeah, brown eyes are the most common amongst dogs. Meanwhile, green, blue, or grey eyes are way less common. Some dogs might even have eyes of different colors, and this is especially common amongst husky breeds! 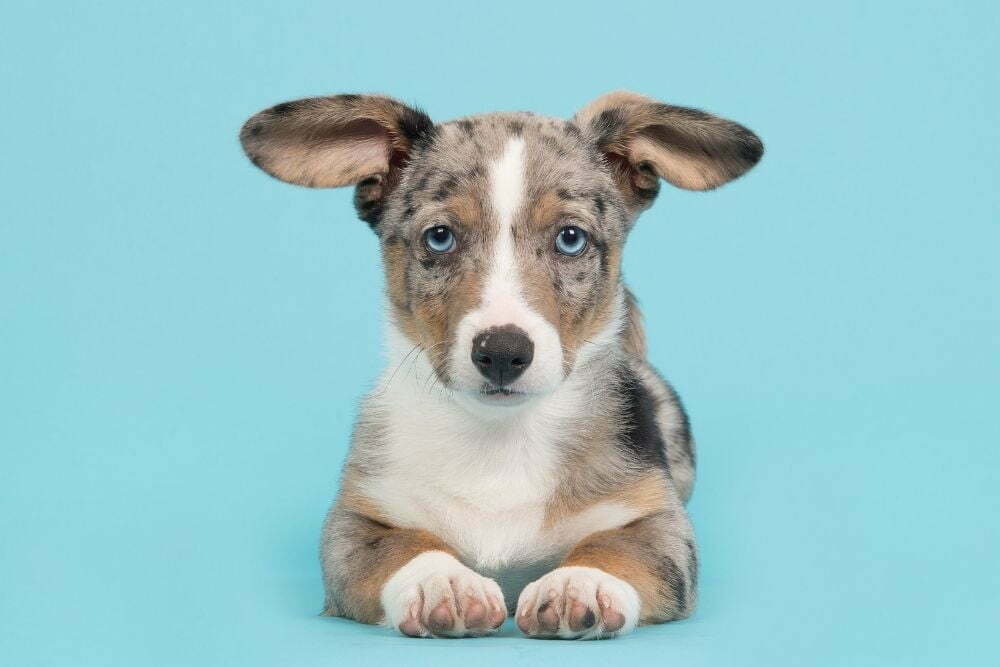 How can you tell if your puppy will have permanently blue eyes?

If all dogs are born with blue eyes, but then the most common eye color is brown, it’s pretty safe to assume (in most cases) that your puppy will have an eye color change roughly at around 9 to 12 weeks of each, from blue to whatever shade of brown it ends up having.

But what if your dog ends up having blue eyes? How will you know that blue is the permanent color, and not just that the change is happening late and hasn’t happened yet?

However, there are other ways to guess the permanent eye color, before the switch actually happens. One of these is to look at the eye color of your puppy’s parents! Similarly to humans, the appearance of a dog is largely inherited from the parents, with many traits being genetic, such as eye color. So if the parent dogs have blue eyes, then there’s more of a chance of your puppy having blue eyes, meaning they won’t actually change color after 12 weeks. However, it is never a certainty, as the eye color could still switch to brown!

Another big factor that you can look at to guess the final eye color of your puppy, is the breed of dog it belongs to. Some dog breeds have almost a guaranteed set eye color, which is usually a certain shade of brown. And some dog breeds are more prone to having blue eyes, so if your puppy belongs to one of them, then chances are it won’t go through an eye color change!

Some of the dog breeds that most commonly have blue eyes are:
Siberian Huskies, Australian Shepherds, Weimaraners, Border Collies, Dachshunds, Great Danes, and Pit Bulls. (Amongst many others!)
However, remember that just because your puppy belongs to this breed doesn’t mean that it will automatically have blue eyes. It just increases the chances!

Why do puppies’ eyes change from blue to another color?

Just to reiterate, why do puppies’ eyes change from blue to another color? We have established that puppies are born with blue eyes due to the lack of melanin and that they will then develop the melanin over the course of a few weeks, during which time the eyes will switch to their final and permanent color.
But is that all there is to it? It’s just down to the melanin needing some time to develop?

Let’s look at some of these other factors:

It essentially creates mottled patches over a solid color, and in some dog breeds, the merle gene is so common that the patches are considered to be a standard in the dog’s coloring! It also produces variations in color to the eyes, in which case melanin has nothing to do with it!

Heterochromia is when the eyes are of a different color each, it can happen in humans, and it can also happen in dogs. This can be a result of many different things, including the merle gene or other gene mutations. It is especially common in Huskies!

There are other gene mutations that can cause a dog to have blue eyes, that have nothing to do with the amount of melanin developed. For example, Huskies are known for their icy blue eyes, and they aren’t necessarily inherited! The truth is, a lot of Huskies have a mutation on their ALX4 gene, which causes bright blue eyes!

Can a puppy have heterochromia?

As we’ve already mentioned, heterochromia is when the irises of the eyes are of different colors. It can happen in humans, and it can also happen in dogs! This can present itself in the early days, so puppies can indeed have heterochromia!

However, there is no need to worry. Heterochromia does not affect the dog’s vision in any way, all it does is give your dog differently colored eyes, which can be incredibly mesmerizing! This can be both inherited, and caused by a gene mutation.

There are also different types of heterochromia:

Central heterochromia is when both irises have a different color around the center, as the border around the pupil. So for example, the black pupil will be surrounded by a ring of brown or green, and the rest of the eye will be blue.

To sum the main question of the article up, all puppies are born with blue eyes, due to the lack of melanin. Once they open their eyes, the melanin begins to develop, and after around 9 to 12 weeks they should have fully developed their permanent eye color, which is usually brown.