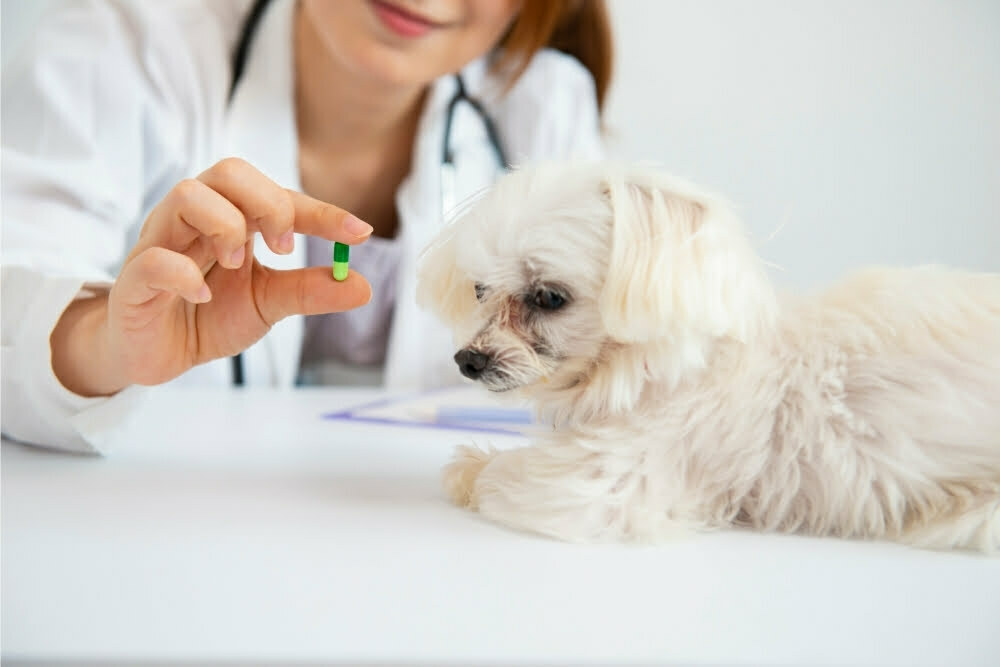 There are a couple of factors that could lead to considering euthanizing your diabetic dog. In most cases, diabetic dogs are put down due to old age or other health conditions that have been created by diabetes.

Regardless of the condition of your dog, you should always consult with a vet before you even consider putting your dog to sleep.

No decisions have to be made immediately, as there are many routes you can take to improve the quality of your diabetic dog’s life.

In this guide, we look into canine diabetes and how long diabetic dogs usually live. We also cover different treatments that can help provide your dog with a long and loving life.

Average Lifespan of a Diabetic Dog

Although canine diabetes isn’t curable, dogs are no longer expected to die immediately upon diagnosis of diabetes.

If a dog has been diagnosed with early symptoms, it can live an extra 5, 6, 7, 8, or more years depending on its treatment.

If your dog has been diagnosed late into their condition, or perhaps misdiagnosed and left untreated, they are likely to have at least 2 more years to live.

In the most severe cases, an untreated diabetic dog isn’t likely to live past 60 days of the diagnosis.

Interestingly, most dogs won’t actually die from diabetes itself. Each dog will have an individual reaction to the condition, and will therefore have a personalized treatment plan. The speed at which they pass away (or need to be put down) is unpredictable.

Canine diabetes is similar to human diabetes, in that the dog’s pancreas cannot produce enough insulin – if any at all.

Depending on the type of diabetes they have, their body might react differently to the insulin their pancreas produces.

Insulin works to carry glucose (sugar) around the body and absorbs it from the blood into cells, where it can then be used for energy.

If a pancreas cannot produce enough insulin to do this, the glucose remains in the bloodstream. This leads to high blood sugar levels.

To deal with the glucose, the dog’s body will create ketones by metabolizing fat. Ketones are another source of energy that doesn’t require insulin to be absorbed into cells. However, high blood sugar levels and high levels of ketone can make a dog sick.

When there is no insulin to control the sugar levels in the blood, this can lead to a condition called hyperglycemia. This often works hand-in-hand with diabetes, as it can result in other health issues like urine infections.

As with humans, there are two types of canine diabetes: Insulin-deficient diabetes and insulin-resistant diabetes. 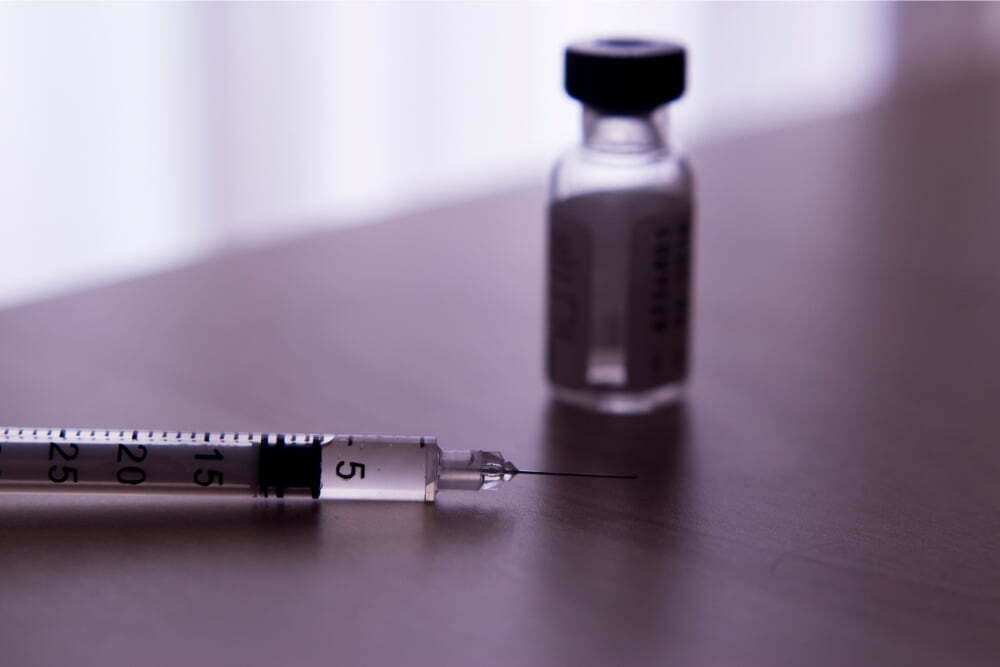 This is the most common type of diabetes in dogs, affecting roughly 0.34% of dogs. Type 1 canine diabetes means the pancreas cannot produce enough insulin, if not any at all.

Type 1 canine diabetes is incurable and must be treated with insulin treatments to help their bodies absorb glucose into energy. This is usually administered through insulin injections, much like with Type 1 diabetic humans.

Type 2 diabetes is less common than Type 1 diabetes, and usually occurs in overweight or pregnant dogs.

This is when the pancreas can produce insulin, but the body doesn’t process it correctly. Pregnant dogs who experience this will often only have insulin resistance temporarily. This is often called gestational diabetes.

Each diabetic dog will have different symptoms of the condition to others. It’s an unpredictable and individual disease, but there are some common symptoms to look out for.

In more serious cases, dogs can also experience loss of sight. Cataracts are an unfortunate side effect of diabetes, which can eventually lead to blindness. Your dog’s eyes will look cloudy and you may think it is experiencing vision problems also.

How Canine Diabetes is Diagnosed

If you notice these symptoms in your dog, you must take it to the vet to be properly examined.

The diagnosis of diabetes will include a blood test and a urine test. Both of these will provide data on the glucose levels, as well as high liver enzymes and electrolyte imbalances.

An issue with these tests is that dogs can increase their glucose levels due to stress, which can occur in a vet’s office.

This means a high level of glucose could easily be a one-off problem, so there might be a series of tests over a few weeks to determine the root of the problem.

Then, the vet will look into a treatment plan for your dog. If the case is severe and looks difficult to treat, then they will discuss the option of euthanasia.

Research has shown that there are no current causes of diabetes, but there are certain factors that might give some dogs a disposition to developing it.

As genetics can be a cause of diabetes, it’s important to get a family medical check when you first buy or adopt your dog.

If you buy a dog directly from the breeders, make sure to ask for Kennel Club paperwork for reference in the future.

If you have adopted your dog from a rescue shelter that doesn’t have information on the animal’s family history, you should take your dog to your veterinarian to get tests as soon as they start showing symptoms.

However, canine diabetes is unpredictable, so you shouldn’t assume that your dog will be immune from developing it if they’re not an unspayed, old, overweight female.

As of yet, there’s not much evidence to say that some breeds are more likely to develop diabetes than others.

It is said that Samoyeds and Cairn Terriers have a disposition to the disease, as well as Border Collies, Border Terriers, Yorkshire Terriers, Dachshunds, Rottweilers, Schnauzers, and Labrador Retrievers to name a few.

However, diabetes isn’t going to pick a deliberate breed.

After diagnosis, your vet will give you (and your dog) a personalized treatment plan. This usually involves a specific diet, exercises, and a way to count your dog’s glucose levels.

There are two ways to monitor your dog’s glucose levels – through urine tests or a pinprick blood test. Most dogs will also require an insulin injection twice a day every 12 hours. The type of insulin and amount will be determined by your vet, which you must stick to.

Everything has to be done specifically and routinely. Whilst it might seem overwhelming at first, your vet’s advice will soon become second nature.

You will be required to take your dog to the vets regularly to keep an eye on the treatment. This is especially the case if you notice a significant drop or spike in their glucose levels.

This can be identified by urine or blood tests, or other physical symptoms such as dizziness and lethargy.

When To Put Your Diabetic Dog Down

Dogs are masters of disguise. There will be some dogs who don’t show their symptoms until it’s too late when you might have to turn to the final and unfortunate option – putting them down.

It should always be a last resort to put your dog down. However, sometimes it’s actually kinder to put them out of their misery.

To clarify once again, if your dog has been diagnosed with diabetes, this isn’t an automatic death sentence! The only time you should consider euthanasia is if your vet brings it up.

It’s never easy to choose to put your dog to sleep. Ultimately, it is your decision whether to follow through with euthanasia and when, but you also need to listen to your gut and trust your dog.

You will notice when they are ready to go, and it’s much kinder to put them out of their suffering into a peaceful, controlled sleep.

Your vet will be the best person to talk to about this difficult decision. Most diabetic dogs who are put down are put to sleep because their condition was left untreated for a long time, which can lead to a plethora of health issues.

The thing with diabetes is that it’s not usually the diabetes itself that ends the dog’s life, but the health problems it might cause.

Some of the long-term (and short-term) impacts of untreated or serious diabetes include:

There is no right time to put your diabetic dog down. You will know your dog better than anyone, potentially even better than your vet, so you should follow your gut instincts.

Losing a dog is like losing a family member. Owners will often feel guilty for putting their dog down because they either think it was too early or too late.

Truth is, diabetes is incurable and unforgiving in the most serious cases.

Sure, there are personalized treatments available for dogs who can live long and healthy lives, but in some cases, you might just have to let go.

It might also be kinder for the dog to pass away peacefully in a controlled environment compared to something more tragic, such as during a seizure caused by diabetes.

If you have to make the painful decision to put your dog to sleep, you should look into grief guidance through charities and your doctor to help yourself and your household mourn healthily.

So, there you have it! The ultimate guide on canine diabetes, how to treat it, and if or when you should put your dog down.

Canine diabetes is an incurable disease that can be handled in most cases by treatment plans that can help your dog live a long and healthy life.

However, despite the abundance of medical help, advanced and serious cases of diabetes can be life-threatening if they have been left untreated.

Untreated diabetes can lead to a plethora of health problems that can prevent your dog from living a healthy and fulfilled life.

There is no right or wrong time to put a diabetic dog down, as the disease is extremely unpredictable and individual. Make sure to listen to your vet, your gut, and your beloved dog.