A dog’s nose is one of the sweetest things about them. But they are also useful for keeping an eye on their health. Whether your dog’s nose is hot or cold is an indication of their temperature and can tell you if they are sick.

Contents show
1 Vitiligo
2 Discoid Lupus Erythematosus (DLE)
3 Kennel Nose
4 Pimples
5 Nasal Hyperkeratosis
6 Snow Nose
7 Pemphigus Foliaceus (PF)
8 Frequently Asked Questions
8.1 What are the bumps on my dog’s nose?
8.2 How do I know if my dog has a nasal tumor?
8.3 What do dog pimples look like?
8.4 How do you treat dog acne at home?

A dog’s nose can often be one of the first places that you will notice any illness or problems with their skin. Especially if you have a dog with thick or long fur. One common symptom is a white spot on the dog’s nose. If this isn’t a natural part of their appearance, then it can be a sign of something else.

Here are the main reasons why that white spot might have appeared on your dog’s nose. 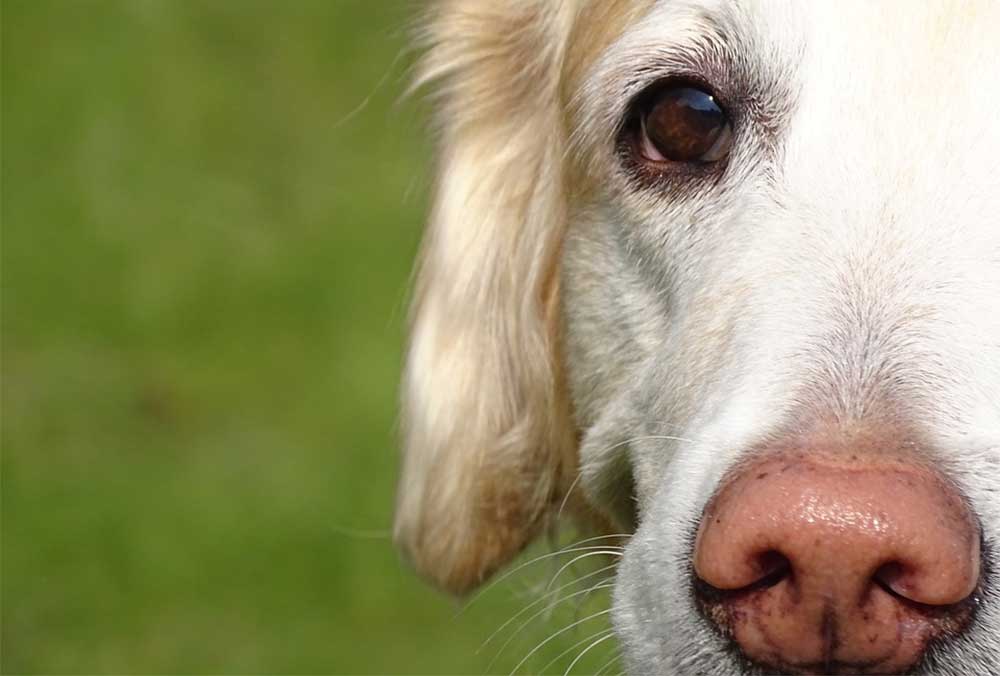 Vitiligo is a skin condition more commonly associated with humans. But it is possible for dogs to develop vitiligo as well. This is because vitiligo causes the skin to lose its pigmentation. This usually appears in small patches. But it can spread.

Dogs, as they also have pigmentation, can also develop vitiligo. It can begin as a very small patch, such as a white spot on the nose, but can then spread across their body.

In dogs, there are two different kinds of vitiligo. One is focal vitiligo, also known as “snow nose” (scroll down for a separate section on this.) This is when a small spot of white appears on a dog’s nose. But does not spread further across their body.

The other form of vitiligo found in dogs is called generalized vitiligo. This is when patches of pale or white skin appear across the body. This can appear as random patches or as symmetrical patterns. This kind of vitiligo can spread.

Vitiligo often begins when a dog is young and still a puppy. But it might not be noticeable until it spreads as they get older. The speed at which vitiligo spreads can vary for each dog. If you think your dog might have vitiligo, check other parts of their body as well. Especially around the eyes, lips, and paw pads.

If you are concerned about your dog’s health, then it’s worth a trip to the vet. But, if the diagnosis is vitiligo, then there is nothing to worry about. Vitiligo is painless and won’t cause your dog to suffer. Vitiligo can spread. But skin can also re-pigment and alter in different ways.

This disease is identifiable through redness and white spots on the nose of a dog. But it can also appear on other parts of their body, including around the eyes and lips. It is especially noticeable on the nose due to it being exposed and not covered in fur. Other lesions might be present across the body, but go unnoticed due to being covered by fur. In some cases, as well as a white spot, the nose will also become smoother and lose some of its natural bumps.

Unfortunately, there is no known cause of DLE. As it is an autoimmune disease, treating DLE requires suppressing the immune system. This can be complex, and the dog might require multiple types of treatment. It can often be a process of trial and error.

In the meantime, the symptoms can be treated with creams that will reduce the skin lesions and make the dog more comfortable. As sunlight can make the problem worse, it is best for the dog to remain indoors.

Kennel nose develops when a dog is in a cage or crate for extended periods of time. It is caused by them regularly rubbing their noses against the bars and floor. This causes the skin of their nose to become raw and grazed. This can often appear as a white spot or bump on the nose.

This can be treated in the same way as other cuts and injuries. In order to keep the nose clean and free from infection, it’s a good idea to regularly clean the grazed area. But it should be prevented by keeping your dog in a crate as little as possible. This can cause your dog to become nervous and anxious. This results in them trying to bury food or other items in the ground, but being unable to do so because they cannot break the base of the crate.

They could also be attempting to dig their way out or pawing at the sides and base in distress. Keeping a dog in a small space is never a good idea, especially for long periods of time. So, if your dog appears distressed in their crate, it might be time to find an alternative.

This is a relatively innocuous problem. Just like us, dogs can get pimples from clogged pores, especially hair follicles. This is unsurprising when you consider all the different things your dog shoves their nose into. Pimples can also appear, as whiteheads or blackheads, on a dog’s stomach or genitals. Essentially wherever skin is exposed.

Pimples shouldn’t be a cause for concern and will go over time. Just make sure to clean your dog thoroughly whenever they are bathed, getting into all the nooks and crannies, and not forgetting the face.

The most important thing is to not be tempted to pop the pimple. This will potentially hurt your pup. And also cause the pimple to become infected and made worse, especially if they then go outside or eat food with an open wound on their nose.

If the problem persists, then there might be a specific issue. This can be a dirty food or water bowl or something else. Make sure to clean these bowls regularly. If you are concerned, speak with your vet for more specific help.

As the name suggests, nasal hyperkeratosis is an excess build up of keratin on the nose of a dog. This causes the skin on the nose to become dry and cracked. A growth can also be seen on the dog’s nose which can appear as a white spot. In very severe cases, this growth can become up to an inch long.

Before it becomes severe, it is quite difficult to spot. Before this growth appears, the skin will mostly remain black but become dry and cracked. So, if your dog’s nose doesn’t feel as damp as usual or feels a little cracked, it’s worth getting checked out. Moisturizer will be the best course of action, but further treatment might be necessary if the dryness persists or gets worse.

Unfortunately, nasal hyperkeratosis cannot be cured. It can occur in any breed, but is most prominent in bulldogs, boxers, bull mastiffs, collies, German Shepherds, Japanese Chin, Pekingese, Pomeranians, poodles, and pugs.

Snow nose usually occurs during the winter months and its proper name is hypo-pigmentation. This is when the color on a dog’s nose begins to fade from its usual black or dark brown to a light brown or pink color. It can sometimes be so faded that it becomes white, and this is called “snow nose”.

The cause of snow nose is not entirely known, however, as it usually appears during winter, it is often attributed to the change in temperature. That said, it is not unknown for snow nose to appear during warmer weather.

Snow nose is not at all harmful to dogs. The nose will usually turn back to its normal color, but in some cases it does stay the same. The change in color is the only symptom of snow nose, and the nose should remain bumpy and free from sores and dryness. If other symptoms occur, then there’s a chance the issue is something other than snow nose, and the dog should see a vet.

PF is another autoimmune disease. It is most commonly found in older and more elderly dogs. It can affect dogs of any breed and appears as pustules on the nose, eyes, and ears.

The causes can’t be exactly pinned down, but fortunately it can usually be easily treated with steroids. 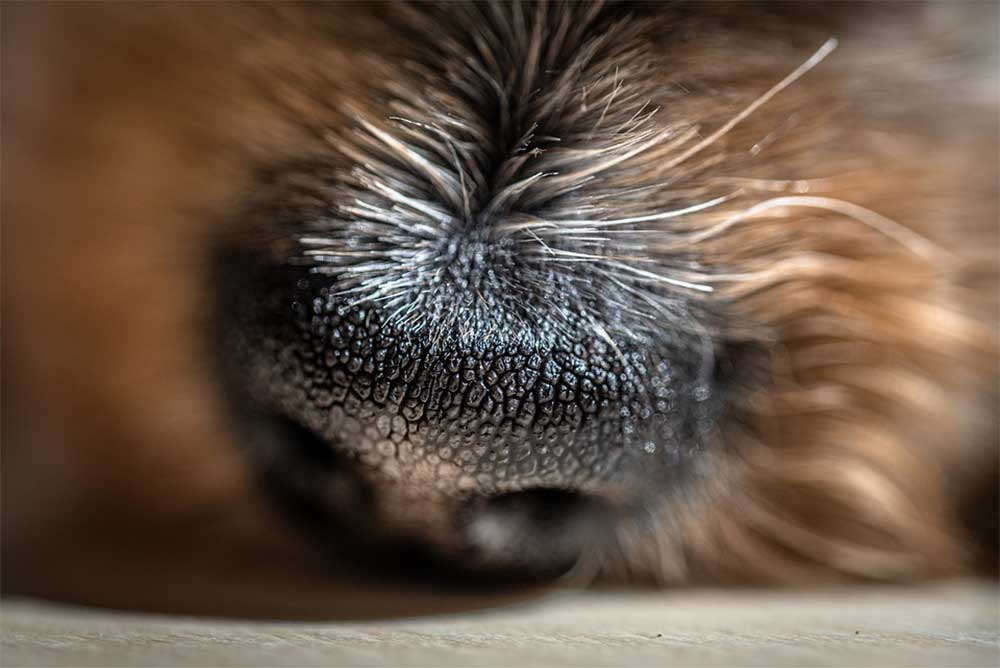 What are the bumps on my dog’s nose?

Dogs naturally have bumpy noses, often described as a cobblestone texture. This is completely normal and nothing to worry about.

The bumps are a good sign of your dog’s health. If the nose begins to become smoother, this can be a sign of an illness and should be checked out.

How do I know if my dog has a nasal tumor?

When it comes to any kind of discoloration or lump, most people’s minds spring straight to cancer. And this is very understandable. Symptoms of a nasal tumor include discharge from the dog’s nose, noisy and labored breathing, coughing, weight loss, and general lethargy.

Lumps on the nose might not necessarily be a sign of a tumor. But, if you are concerned about a change in your dog’s nose, then it’s worth getting it checked out. Keeping an eye on your dog’s nose is a great way to assess their health.

Dog pimples look very similar to human pimples. They are often red spots, usually relatively swollen, and can appear as whiteheads or blackheads. As with humans, pimples can appear differently on different dogs.

Different breeds will have different types of skin and be prone to different pimples. The most important thing is to keep your dog’s skin clean and wash them thoroughly. And definitely do not pop the pimples!

How do you treat dog acne at home?

As mentioned above, it’s best to keep the area clean and avoid the temptation to pop the pimples. But it’s also important to be gentle.

Don’t scrub or rub the acne, this will only cause it to become more irritated and inflamed.