What makes a bearded dragon open its mouth? Is it because they want food or water? Or maybe they’re just curious about something new?

If you’re familiar with bearded dragons, then chances are you’ve seen them sitting with their mouths open at one point or another. 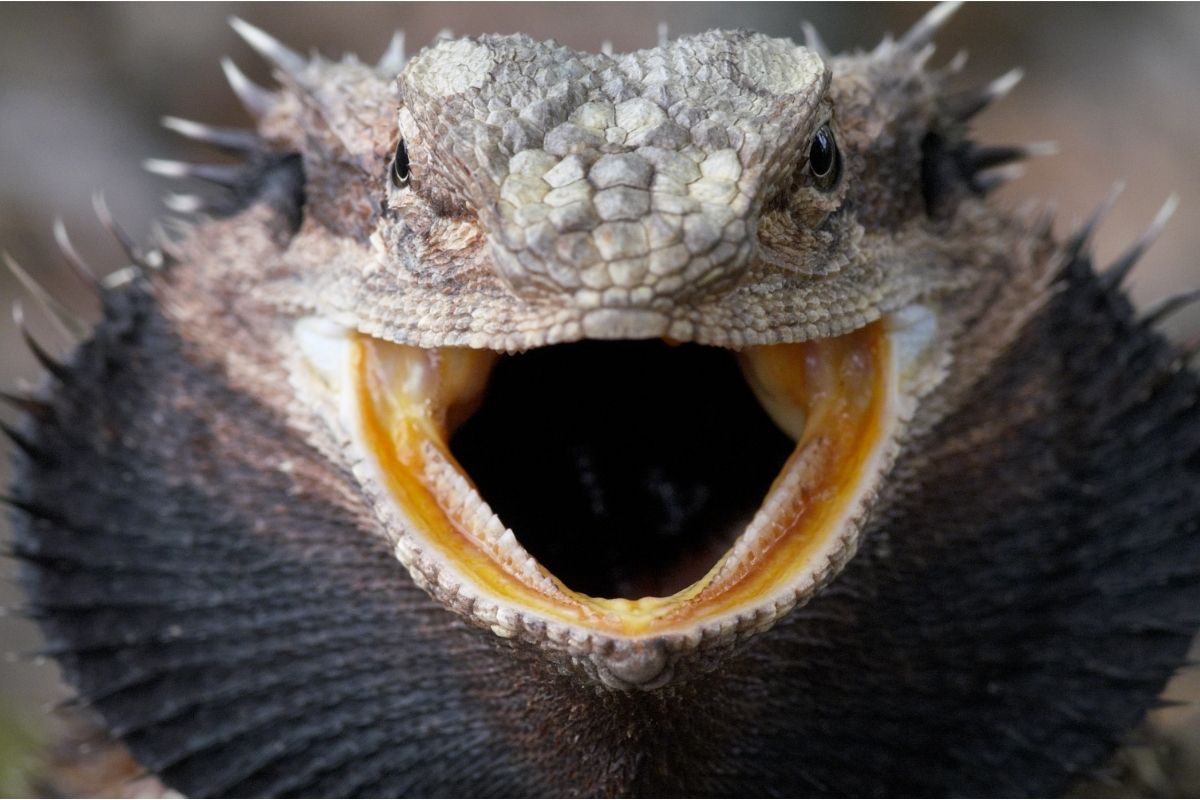 This almost looks like a toothy grin, but it can be hard to tell exactly why they’re doing this.

There are several reasons why bearded dragons open their mouths like this, and depending on the situation it could indicate completely different things about how your bearded dragon is feeling and what it might be trying to communicate.

Bearded dragons open their mouths like this pretty commonly. If your beardie is opening its mouth a lot, don’t worry – most of the time it’s completely harmless.

However, in some cases, it could be a sign that something’s wrong with your bearded dragon.

Read on, and we’ll take you through the most common reasons why bearded dragons open their mouths!

One of the main reasons why bearded dragons open up their mouths is simply for stretching.

They do this when they first wake up from sleep, as well as after being awake for a while.

Over time, a bearded dragon’s beard can become stiff and uncomfortable.

As a result, your beardie will stretch its beard outwards so that it feels more comfortable.

A bearded dragon stretches its beard by puffing out its neck and flaring its beard to stretch out the muscles.

This is typically accompanied by the beardie rapidly opening and closing its mouth. It may even lick its lips as it does this.

You should see this behavior if you have an active bearded dragon who is waking up from sleep.

While seeing this rapid mouth movement and puffed-out beard might be concerning for new beardie owners, it’s perfectly normal and nothing to worry about.

Another reason why bearded dragons open their mouths is to yawn. When a bearded dragon yawns, it opens its jaw to allow air into its lungs.

This helps increase oxygen levels in the lizard’s bloodstream.

The lizard breathes faster, which increases the amount of oxygen circulating throughout its body. This allows the lizard to stay warmer than normal.

A bearded dragon will also puff out its beard slightly as it yawns.

If you see your beardie stop for a moment and open its mouth while puffing its beard out slightly, chances are it’s just having a yawn!

This is especially common if they have only just woken up or if they’ve been awake for a while.

Another super common reason why your bearded dragon has its mouth open is if it’s doing something known as ‘gaping’.

This refers to when a bearded dragon opens its mouth to regulate its body temperature.

While beardies prefer a warmer enclosure (ideally around 80 °F, or 27 °C during the day), if they get too hot then they will open their mouth to help get rid of excess body heat.

This is done by letting cool air pass over their tongues and down their throats – think of it like how a dog will let its tongue hang out when it’s hot.

Gaping is often accompanied by the beardie breathing heavily and puffing out its beard.

Gaping most commonly occurs while a beardie is basking.

As cold-blooded lizards, bearded dragons need to bask under the sun (or, in the case of a pet beardie, a heat lamp) in order to raise their body temperature.

This is the ideal temperature for a bearded dragon to bask in, but your beardie can start to get too hot over time.

To counteract this, they will open their mouths – this vents out the excess body heat and helps to cool your beardie down.

Gaping isn’t a bad sign; instead, it’s just a way for a bearded dragon to stay at a comfortable temperature as it basks in the warmth.

A happily basking beardie will be comfortable and relaxed, with its mouth open to regulate its body temperature to the perfect level.

If your bearded dragon suddenly starts gaping without warning, make sure you check that it isn’t sick.

Sick bearded dragons tend to gasp for breath rather than gape. As long as it doesn’t seem to be struggling for air, it is probably just gaping normally.

It’s normal for bearded dragons to gape while they bask or if they’re too warm, and it’s actually a good sign that they are at a comfortable temperature.

As A Defense Mechanism 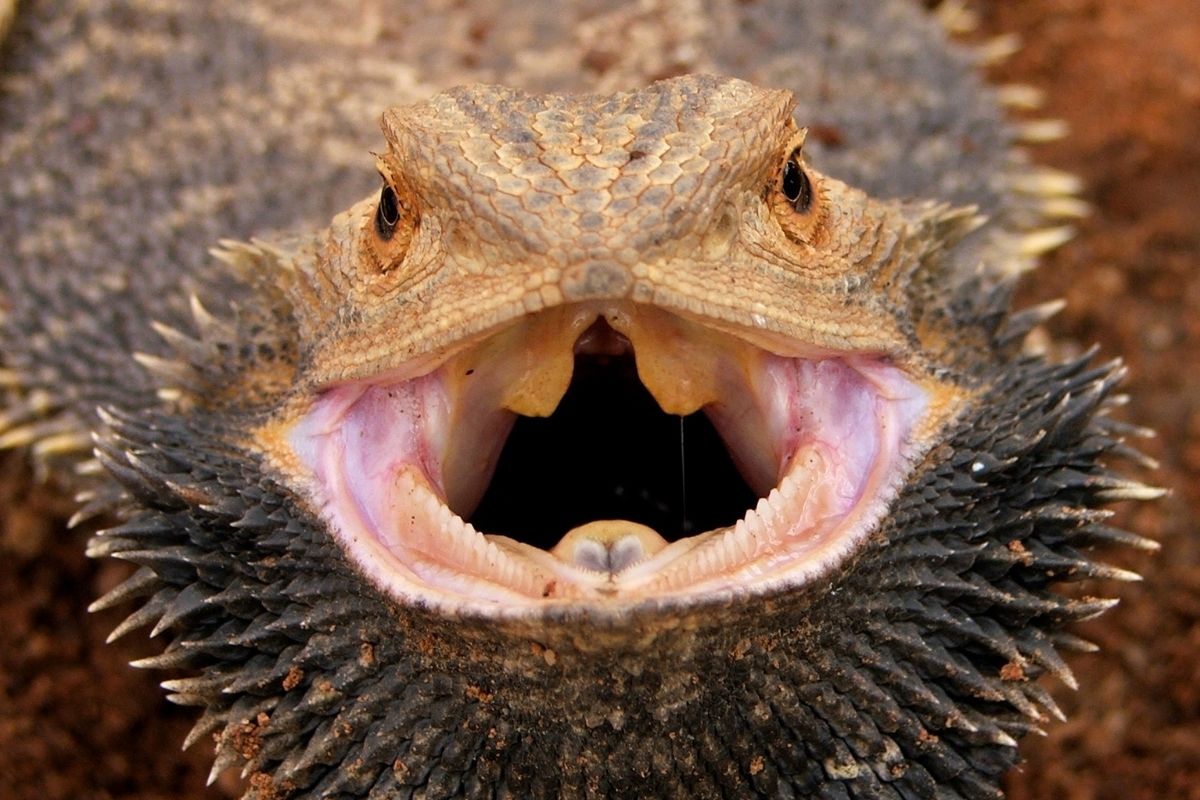 Any beardie owner can attest that bearded dragons aren’t aggressive animals, and that they are peaceful and even affectionate creatures.

However, they are still prepared to defend themselves if provoked and can behave aggressively if they are scared or threatened by something.

For example, if you accidentally knock over a glass jar containing food, or if you drop a toy on the floor and it lands near them, they may become startled and lash out defensively.

In such cases, a bearded dragon may open its mouth and puff out its beard in an attempt to look intimidating.

This is usually a method to ward off predators, but a pet bearded dragon might do this if they are scared by something (such as a loud noise or sudden movement towards them).

Bearded dragons aren’t exactly the most fearsome creatures to roam the earth, but their tiny sharp teeth are still more than capable of giving you a nasty cut if your beardie lashes out in defense.

The best thing to do if your bearded dragon becomes agitated is to give it some space and help to make it feel safe again.

Most bearded dragons won’t be aggressive without good reason, and if you’ve startled one into opening its mouth as a warning, then you need to let it know that you aren’t a threat.

Scared beardies can lash out when startled, so keep your hands well clear of its mouth if it starts behaving aggressively.

You can tell when a bearded dragon is opening its mouth in defense because it will puff up its neck and square its body up.

It may also hiss, and may move forwards and backward from you. If your bearded dragon is behaving aggressively, back off slowly to help it feel comfortable again.

To Communicate With Other Bearded Dragons

Humans aren’t the only things that a beardie might act aggressively towards.

Bearded dragons are territorial animals, and housing two of them in a single enclosure (or even in separate tanks right next to each other) can lead to problems between them.

Bearded dragons will try to establish dominance over each other when kept together.

One of the ways they do this is by opening their mouths as a sign of aggression and dominance.

In more enclosed spaces without much room, this territorial behavior can be even worse, possibly leading to the more dominant beardie attacking the less dominant one.

Other issues caused by housing two or more beardies together include the less dominant one becoming stressed or depressed, with the dominant bearded dragon bullying it away from water, food, basking spots, and hiding places.

You should never house more than one bearded dragon in a single enclosure.

Additionally, even if you house them separately there is a risk that they will see each other through the walls of their tanks and be territorial then as well.

Keep an eye on your bearded dragons to make sure that they aren’t trying to intimidate each other.

This sign of aggression can also sometimes occur with a single beardie kept on its own; occasionally a bearded dragon will catch sight of its reflection on the glass walls of its enclosure and, mistaking it for a different bearded dragon, will try to intimidate or fight it! 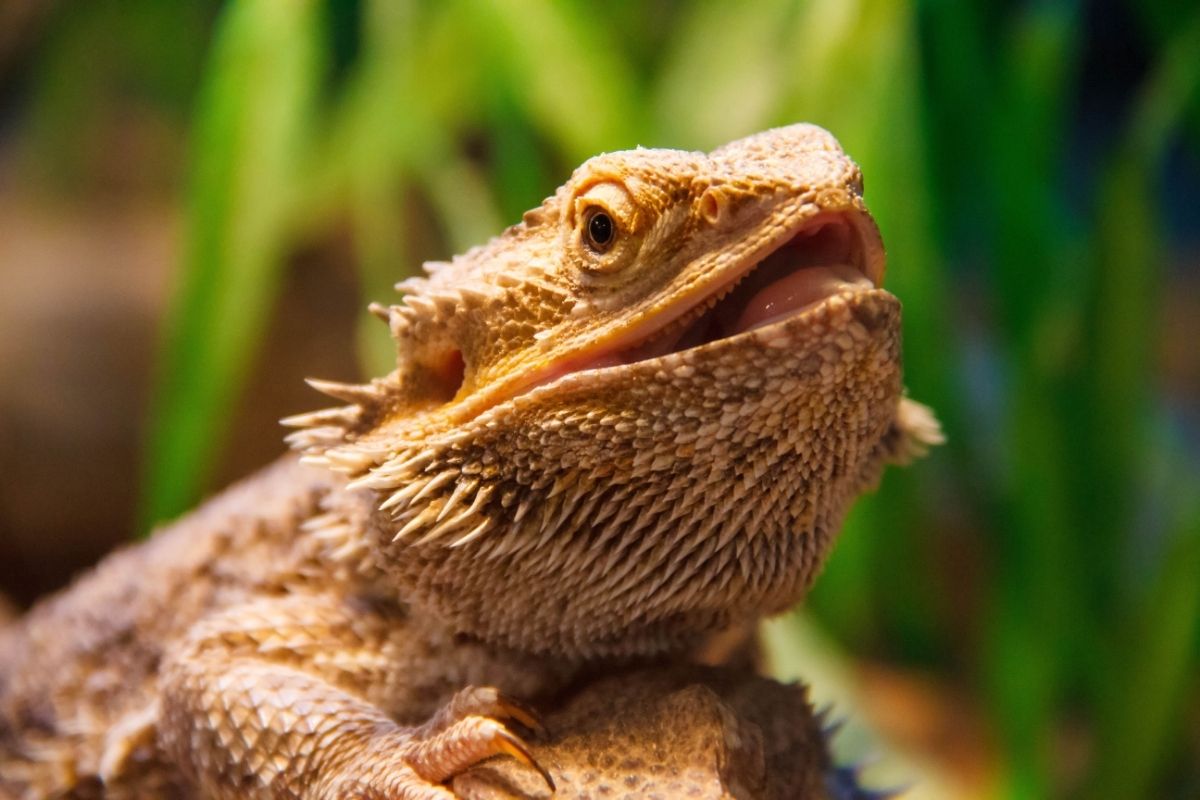 The final reason that your bearded dragon might be sitting with its mouth open is if it’s having a hard time breathing.

As we mentioned earlier, sick bearded dragons can gasp for air in a way that looks similar to gaping.

However, this isn’t the beardies way of relaxing and cooling off; instead, it’s a sign of breathing difficulties and a possible respiratory infection.

An open mouth isn’t the only symptom of a respiratory infection, so don’t panic straight away.

Other symptoms include lethargy, a loss of appetite, and the aforementioned gasping for air.

There are several causes of respiratory infections in bearded dragons.

For example, too much moisture in the air can lead to sickness and infection as beardies require a hot and dry environment.

A bearded dragon enclosure should have humidity levels no higher than 40% – if they are exceeding this, then you should get a dehumidifier for the room with your bearded dragon’s tank to reduce the amount of moisture in the air.

Another cause of these breathing issues is if your bearded dragon has a general illness or bug.

Sick beardies can have difficulty breathing, and will keep their mouth open to try and get more air.

If you’re worried about your beardie’s breathing, then the best thing to do is take it to a vet.

They will be able to check for any infection, take some tests to check your bearded dragon’s health, and try to solve the reason behind these breathing problems.

Making your bearded dragon in good shape is important for keeping it happy and healthy, so make sure to consult with your vet if you have any concerns.

Most of the time, there’s nothing to worry about if your bearded dragon has its mouth open.

Most of the reasons behind this behavior are completely natural and a sign that your beardie is in good health.

While it can sometimes indicate that something is wrong, in most cases your bearded dragon is opening its mouth for normal reasons.

Reading your bearded dragon’s body language is important for telling how it is feeling and what it might want.

As long as your beardie seems relaxed and happy, then an open mouth is nothing to worry about.

However, you should be concerned if your beardie starts to act aggressively or seems to have trouble breathing.

So now you know a little more about why bearded dragons open their mouths.

Whether they are cooling-off while basking, stretching their beard, or simply having a quick yawn, we can all agree that this toothy grin is one that we all like to see!