Bearded dragons are one of the most charismatic reptilian pets in the world. They develop a personality and bond with their owners very quickly, exhibiting affectionate and funny behaviors like cuddling and playing. 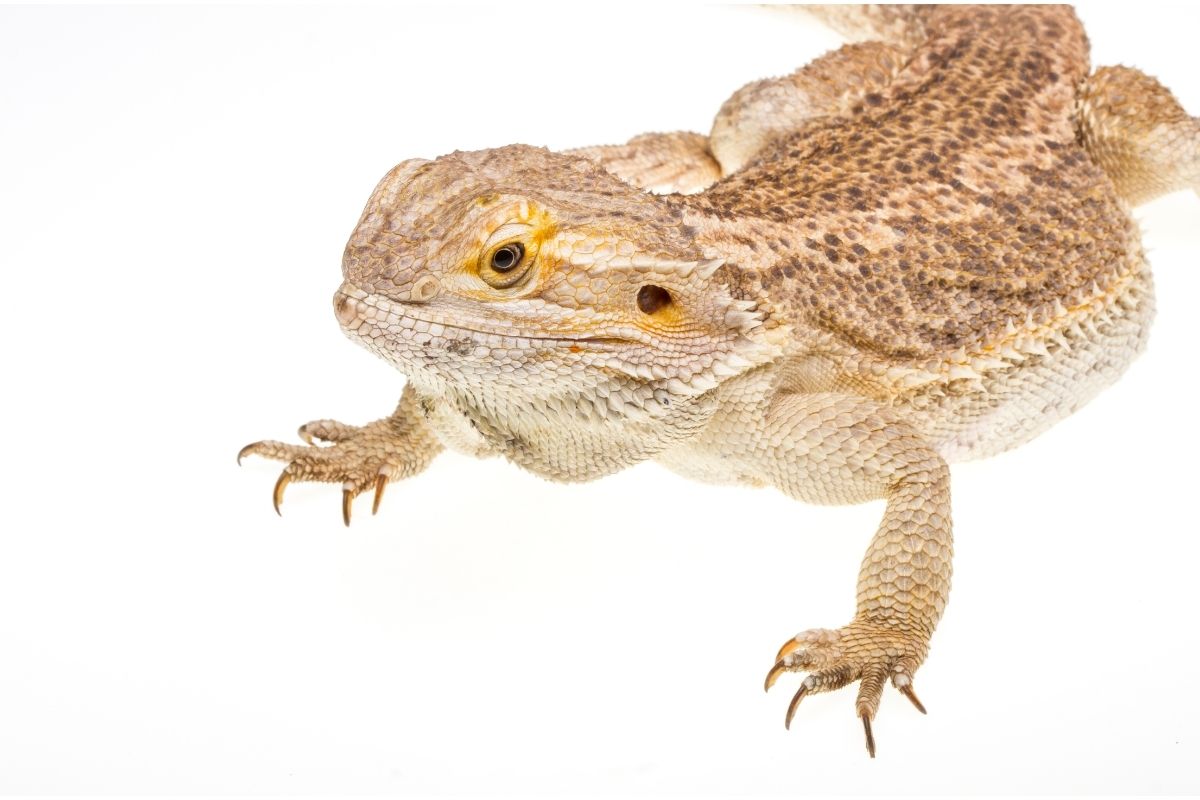 One of the strangest behaviors that a bearded dragon exhibits is its ability to wave. This actually isn’t a common behavior, but that doesn’t mean you should consider yourself lucky to witness it if you do.

When a bearded dragon waves, it doesn’t necessarily mean it’s waving at you to say hello. Instead, it might be communicating something else.

If you’re wondering “why does my bearded dragon wave?”, here is everything you need to know!

Why Do Bearded Dragons Wave?

Time to bust a myth. Unfortunately, when a bearded dragon waves, it doesn’t mean that your pet is greeting you (as cool as that would be).

Here are the main reasons why your bearded dragon is waving at you.

While bearded dragons are highly territorial, they are surprisingly submissive reptiles.

They will communicate with other bearded dragons through movements to show that they aren’t a threat, but prefer to have their own space. They just don’t want to fight over it.

One of the ways a beardie will communicate this is by waving. This is characterized by the bearded dragon shifting

their weight to their back legs and one foreleg, leaning to the side, and lifting up the other foreleg. This foreleg will then move side to side like a wave.

So, this means that if you have introduced another bearded dragon to the same tank, or if there seems to be another reptile present,

your beardie might be “waving” to show submission. This behavior is seen in both wild and captive bearded dragons.

This is because they understand they are smaller and weaker than their larger counterparts, so it’s their way of saying “you’re the boss”.

Between spring and early summer is the mating season for bearded dragons. During this time, a young male or female might exhibit some interesting behavior to show that they’re ready to mate (even if you only own one beardie!).

This means that if you have a female beardie and a male beardie, they might be showing some interest in each other.

However, there are lots of other behaviors that bearded dragons exhibit during the mating season. It’s important to keep an eye out for potential aggressive behaviors to prevent injury.

As we’ve established, bearded dragons are big physical communicators. If they’re not waving to show submission, they might be waving to show fear or stress.

While introducing your beardie to the human world is a good way to bond, it exposes them to new objects that can be deceived as a threat.

Anything larger or different in color can easily be a predator to a bearded dragon, so they will often wave their foreleg to show stress or fear.

This also applies to adding new objects to their enclosure. Sometimes, they need time to familiarize themselves with a new piece of decoration.

To reduce their stress levels, ensure there are enough places for your beardie to hide.

Exposing your beardie to foreign objects (including a television, laptop, phone, clothing, lamps, or candles) will help reduce their fear overtime.

The Enclosure Has Moved

Bearded dragons familiarize themselves with the outside work inside their tank. They will form an understanding of the outside shapes and objects, such as a couch or a dresser.

So, if the enclosure has moved to a new part of the house, this can be disorienting for them.

While sometimes it might be necessary to move their enclosure (perhaps to a designated reptile room), this can be stressful for the bearded dragon.

However, these reptiles are generally quick at adapting to new surroundings, so any waving or nervous movements should stop after a few days.

There’s Too Much Movement

As we have explained before, beardies familiarize themselves with their surroundings outside their enclosure.

They spend a lot of time looking through the glass, either out of curiosity or in an attempt to protect themselves from potential threats.

If there has been a significant increase of movement outside the enclosure, this can be quite stressful for the bearded dragon. 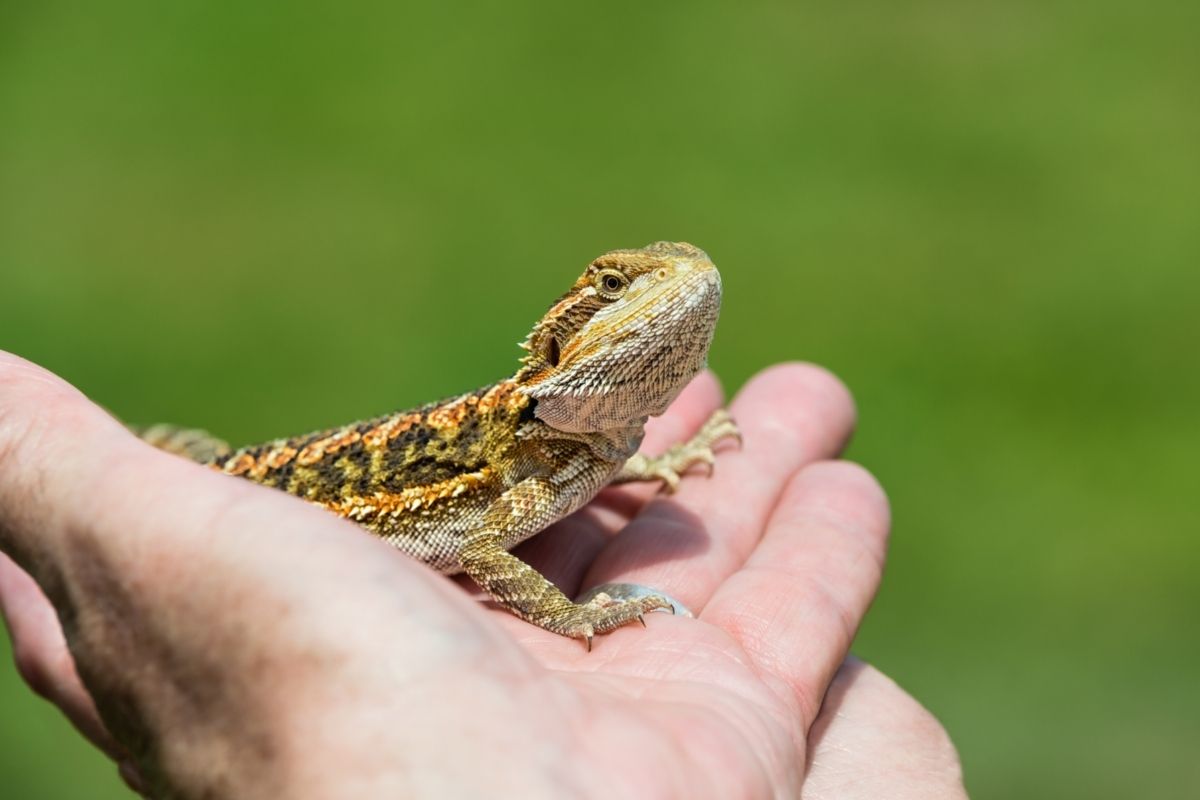 This includes strangers in the house, people walking past the enclosure, strangers pointing and agitating the beardie on the other side of the glass, and even over-stimulation from the sight of a television screen or window.

That’s right – even the constant movement of birds, dogs, or cats can be stressful for bearded dragons.

While most beardies will adapt to these unavoidable movements outside their enclosure, there will be some that continue to wave and exhibit nervous behavior. This is especially true for young and sick beardies.

To reduce their stress levels, try covering one side of the enclosure with a blanket or shut the curtains.

While bearded dragons are fairly intelligent reptiles, this doesn’t mean they don’t get confused at their reflection.

They might see their reflection in the glass and assume it’s another beardie nearby, so they will wave to show they mean no harm.

If you find this happens often, try to reduce the lighting in and around the enclosure to weaken the reflection.

How To Stop Your Bearded Dragon From Waving

As established, a waving bearded dragon is most likely as a result of showing submission or stress. Here are the best ways to prevent your bearded dragon from waving, if you find that it’s a common occurrence.

Fill The Tank With Hides

All reptiles need places to hide from predators, including bearded dragons. Beardies don’t like to be constantly exposed in an open area,

so make sure to adequately clutter their enclosure with plastic hides and fake plants to provide some shelter. This will help to regulate their stress levels as well as their body temperature.

Hides should be large enough for the bearded dragon to fit inside, but small enough that your beardie doesn’t feel overwhelmed.

These places should be dark and dry, which will also help them to regulate their temperature.

In uncommon cases, your beardie might be waving to communicate that something is wrong with the temperature in their enclosure. 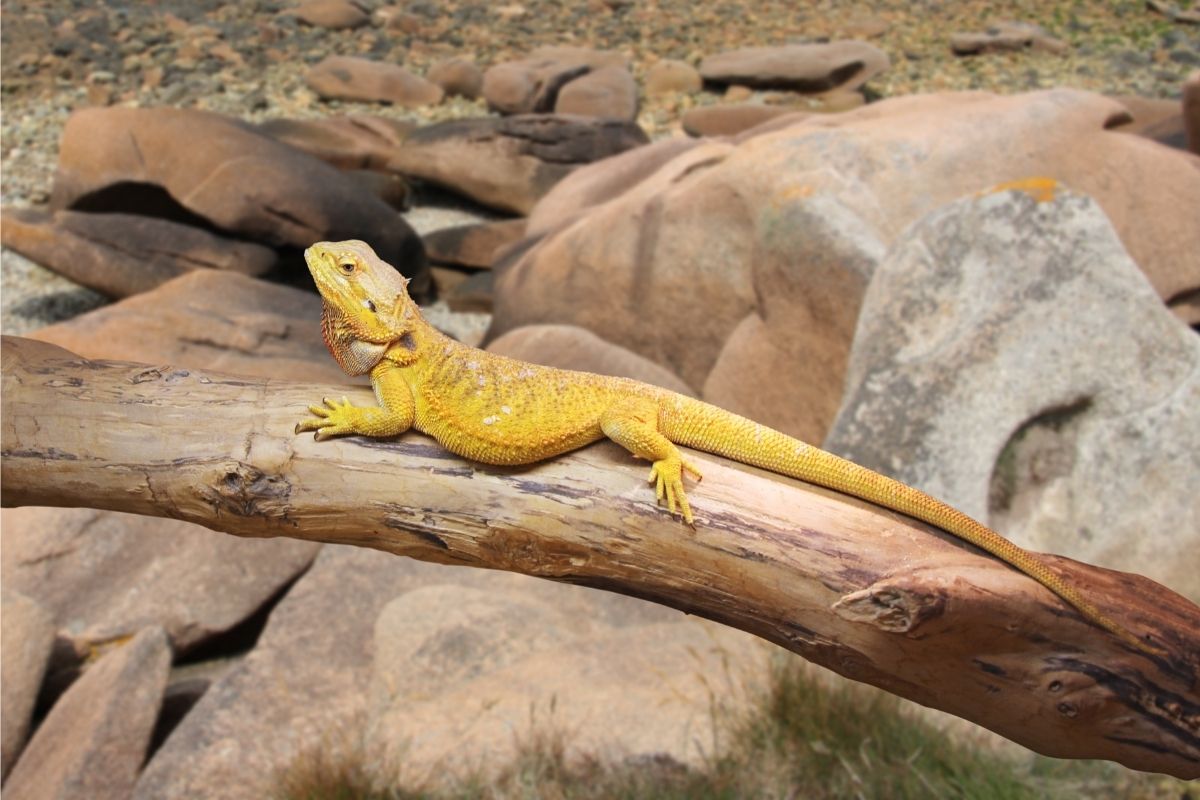 It’s also important to replace the UVB lights every six months or so, as they will eventually burn out.

If your beardie continues to wave longer than 3 or 4 days, this might be because there’s too much movement happening outside the enclosure.

It might be worth relocating the enclosure to a less trafficked area, such as a bedroom or a designated reptile room.

However, this can be a double edged sword, because a new change of scenery can be equally as stressful for a beardie, resulting in some waving motions.

While it might seem like a fun idea to give your bearded dragon a tankmate, this is one of the worst things to do for your pet.

Beardies are highly territorial reptiles who become either submissive or aggressive when kept in a tank with another bearded dragon, so make sure to keep them separate.

Of course, this is unavoidable when it comes to the mating season if you wish to breed your beardies. Aside from this, make sure the bearded dragons are in separate enclosures where they can’t see each other.

Most reptile owners will stack their enclosures on top of one another for this reason.

So, there you have it! Bearded dragons will wave their foreleg for several reasons, none of which include greeting their owner.

If you see your beardie wave, this might be a sign of submission, agitation, fear, or stress, so it’s worth checking over this guide to assess their surroundings.