Have you ever had a puppy play date, and you notice that one of the dogs gets too excited and tries to bite the other’s ears. Most of the time, it is just innocent fun and a sign that your dog is excited, but in other cases it can be a little more serious.

Either way, you will want to stop your dog from exhibiting this behavior. If your dog continues to bite other dog’s ears, even in a playful manner, another dog may not take to it too well. Therefore, you will need to find a way to stop this from happening.

Why do dogs bite each other’s ears? 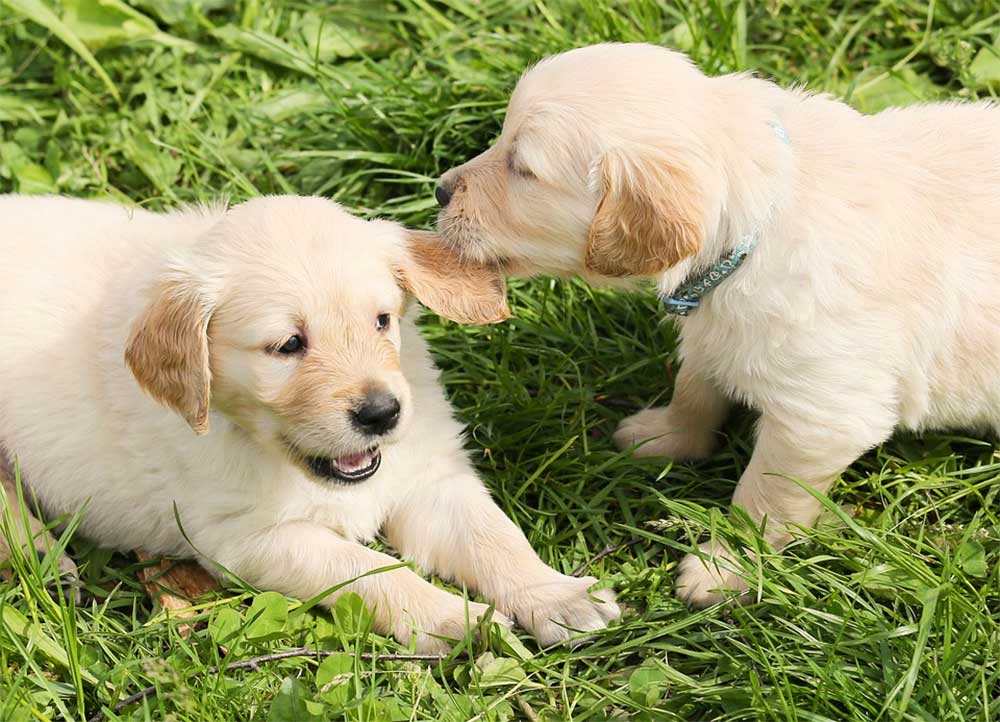 The reason why dogs bite each other’s ears actually depends on the way the biting happens. For instance, if it seems playful and fun, then it is most likely a sign that your dog is excited. On the other hand, if your dog seems to be nipping and biting aggressively, then it could be a much bigger problem.

In most cases, dogs will nip at other dogs’ ears when playing without actually biting down or hurting them. They usually just sort of open their mouths on the ear instead of fully biting. This is simply just a display of dominance, as one dog is trying to assert authority over the other upon meeting.

Why do dogs chew ears when playing together?

If dogs are playing together, then they will be attracted to biting the ears because of many different reasons. However, most dogs do not actually bite hard, as they understand from puppies that biting hurts, and they learn to be soft, gentle and cautious with their teeth.

Dogs love going for each other’s ears because they are usually the easiest target when playing. As this is an excitable and fun situation, the dog is not inclined to nip at the neck, stomach or any other vulnerable areas. Instead, they will head towards the dog’s ears to show that they are just messing around.

Biting at the ears is also a simple way of showing dominance, and asserting their power over the other dog during playtime. You may notice that ear nipping is more common in male dogs than in females when playing, as males like to show authority over other dogs.

The problem with ear biting is that if your dog grows accustomed to nipping at others, it may meet its match one day, which can be dangerous. Some dogs are naturally more submissive, and will not react to a soft bite on the ear, whereas others may not take to it too well.

If your dog is prone to nipping on the ears, then it may exhibit this behavior with all dogs that it meets, which can place your dog in danger of an attack. This is why it is vital that you sway them away from this habit.

In addition, if your dog begins biting too hard, or nipping more excitedly, then it could result in an injury. It may seem like only play-fighting to you, and if your dog causes an injury, a cut ear or wound, it may not seem like just playing to other owners, and you could land yourself in trouble. Ears can bleed terribly, and can take long times to heal, and so you and your dog will need to be careful.

Keep in mind that if your dog does not draw blood when play-fighting, and the other dog is not yelping or cowering, then it is probably just a bit of fun to them. However, if it becomes rough, and any of the dogs change their attitude, then it could be more aggressive, and will need to be stopped. Usually, ear nipping is a way of inviting another dog, and coaxing them into playing with them. You just need to be able to tell if the dogs are happily play-fighting or actually fighting.

How to tell if dogs want to play together

To see if two or more dogs want to play together, there are a few tell-tale signs that you can take into consideration. For instance, dogs may bow down, with their heads close to the floor, and bottoms up, ready to play.

In addition, their tails will be wagging quickly, and they may begin jumping around excitedly. Also, some dogs may run full pelt at other dogs ready to get to know each other, whereas others may roll onto their backs and submit to the dominant dog.

Other dogs may mouth-bite which means that they are not actually biting or hurting the other dog, but you need to be aware of if the other dog accepts this. If you restrain your dog that is biting the ears, and pull them back, and the other dog comes towards them again to play, then it clearly does not mind the habit, and just sees it as an invitation to play!

Why do dogs bite ears aggressively?

Dogs know how to enforce pressure in their bites, and so most of the time, nipping at the ears will not be done to cause pain. Unfortunately, some dogs may become aggressive, and can bear their teeth and actually bite down on the dog, which can cause injuries or draw blood.

Dogs bite ears aggressively for the same reason that other dogs nip at ears…to assert dominance over the other dog, and to get them to submit to them. It is also a means of inciting fear and pain in another dog.

Aggressive ear biting can also be caused by possessiveness. For example, if another dog comes by in the park, and picks up your dog’s ball, they may react by attacking and biting down on the ears as a warning.

Some dogs can also become aggressive due to natural instincts. As dogs are bred from wolves, they have a drive to attack prey, and other dogs can sometimes be the victims of this instinct.

The important thing to remember is that you never want to let the biting get to this point. This is why it is essential to train them out of the habit, and make sure you look for signs that your dog is not going to become aggressive, before the inevitable happens.

To tell whether your dog may snap or become aggressive, there are a few tell-tale signs. For instance, they may bare their teeth and gums, or start snarling and growling at the other dog. Their hackles may become raised, with fur standing on end, and they may begin staring at the other dog, ready to target. If you notice any of these signs, then it is a good idea to separate the dogs from each other, and teach your dog not to exhibit this behavior.

How to stop your dog biting other dog’s ears

To prevent any fighting or accidents in the future, you will need to teach your dog to stop biting other dog’s ears. The best way to do this is with a spray bottle . Simply fill this with water, or use a garden hose, and spray it at the dogs to break them apart, and they will forget about fighting. This method works best when it is done repeatedly.

Another way that you can prevent the ear biting is by distracting the dogs. You can do this with a loud noise to break up the play-fighting. Try using your hands to clap loudly, or purchase a loud whistle: to distract the dogs. Keep in mind that yelling does not work well for this, as it can escalate the problem, and make the dogs become more aggressive.

If the dogs seem like they are fighting, then you will need to know how to break this up. You should never ever put your hands or body between them, as you can become injured yourself. You should also keep your face away from any bared teeth, and be careful how you grab your dog and pull them away, as grabbing the tail can cause further aggression.

To break up two dogs, you can try and put a barrier between them. Some owners suggest throwing a blanket over them to diffuse the situation, whereas others suggest using a stick or chairs to break them apart.

The best way to break up two fighting dogs is to use what is called the wheelbarrow technique. To do this, you will need two people, or one for each dog. Each of you will then have to grab a dog’s back legs, and lift them off the ground so the dogs are left to balance on their front legs.

This then limits their range of movement, and they cannot lunge forward and bite the other dog. Then, you can pull them away, diffuse the situation and calm the dog down.

In conclusion, you may have noticed that some dogs, or even your dog tries to bite other dog’s ears. Most of the time, this is a way of enticing the other dog to play, and is a means of asserting dominance during play fighting. Dogs are highly intelligent, and do not bite down hard to cause an injury in most cases, as it is a little bit of fun for them.

However, if your dog is aggressively biting ears, then you will have to train them out of this behavior, as they could cause an actual dog fight, or injure other people’s dogs.