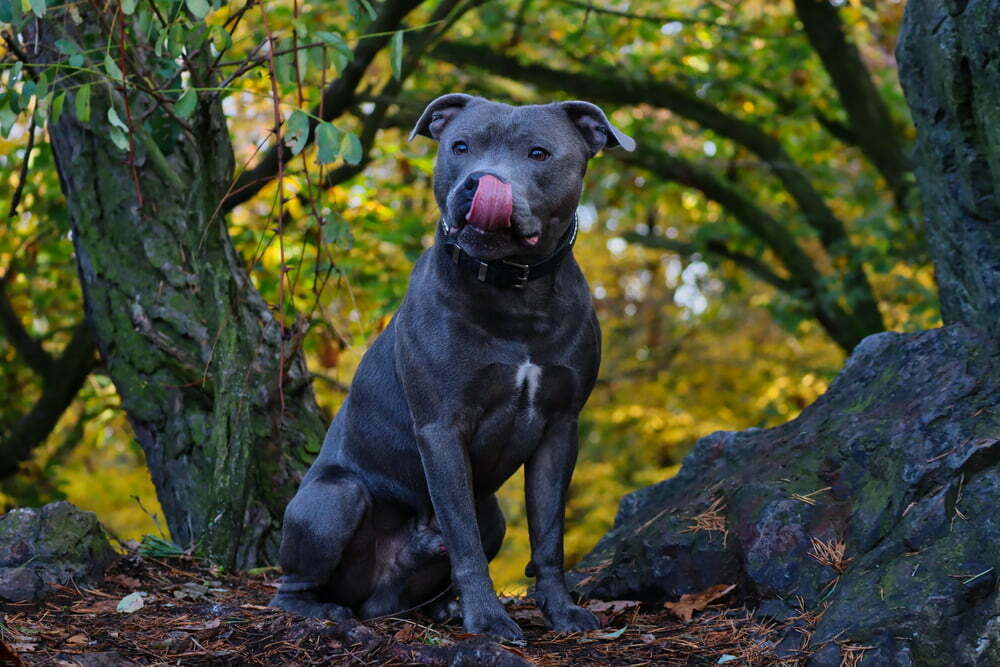 If you’re lucky enough to have a staffy, aka an American Staffordshire Bull Terrier, you might be familiar with a behavior known as a puppy sit, frog sit or lazy sit. Your furry friend might sit in a way that looks like they’re cross-legged with paws touching.

This is usually seen mostly in older dogs, as it can indicate discomfort as a result of joint problems or pain in their lower back, amongst other possible issues. Sitting like this doesn’t cause a problem, it’s indicative of an existing one!

Common ailments that result in the “funny” sit include:

It doesn’t mean your dog is too lazy to sit properly, in spite of what the nickname might suggest – what it does mean, though, is that you need to work on your pup’s front legs and shoulders, so they can maintain a proper sitting position.

That doesn’t mean you can train them to stop sitting this way – it’s not about repeatedly correcting their posture, as this won’t stop whatever is causing the problem, and could cause them to experience discomfort.

All dogs should sit upright – this isn’t a distinctive staffy sit. If this behavior continues and you can’t figure out why, then you should seek advice from your vet, who will be able to teach you exercises that will relieve your canine companion’s pain.

It is really important that you get this dealt with, either by yourself or with medical treatment. Ignoring it will only result in further suffering for your beloved pet, which is the last thing that you want!

Why do staffies lay flat?

Nobody really knows! This adorable behavior, also known as “splooting” on the Internet, is the act of a pup lying down on their bellies, with their hind legs splayed out behind them and their paws all stretched out in front.

It’s not just staffies, either: lots of other dogs love to sploot, for instance Daschunds, Corgis, French Bulldogs, Pugs and even Pitbulls. Pretty much any dog can figure out that it’s super comfy to have a good stretch, to be honest.

There’s no rhyme or reason as to why some dogs sploot and others don’t – it’s possibly just because they’ve discovered it feels nice to stretch out their legs, or because the cool floor feels good against their hot belly on a hot day.

That being said, if your dog is also regularly exhibiting signs of hip dysplasia – an illness wherein their hip joints are no longer properly aligned with the sockets – like lying flat to relieve pressure, sitting in the “lazy sit” or limping, then see a vet ASAP.

Just splooting generally is not a cause for concern, though. As long as you keep an eye on your pooch and make sure they don’t seem to be in pain, they can lie down in a splooty fashion to their heart’s content!

Why do staffies shake?

There are several reasons that your staffy might be shaking – it’s not an immediate cause for concern! It’s worth pointing out immediately that a seizure and a shake are two completely distinct behaviors, so you can rule out that possibility straight away.

If your dog is having a seizure, it will be much more violent, and they will not be able to control any part of their body, nor respond to your voice or any touching. They also may not be able to keep eye contact with you when you look at them.

When this is the case, obviously you should get them to the vets or at the very least, call them, as soon as you can. So, back to shaking – the gentler, less obvious kind. What are the possible causes?