One of the things that most beagle owners don’t talk about, but is nonetheless common knowledge among fans of this relentlessly happy and cheerful hound, is the way that they often smell.

While it isn’t by any means the worst whiff that’ll ever assault your nostrils, the peculiar musk that a lot of beagles have can take some getting used to, and invariably leads a lot of new hound owners to ask “Why does my beagle always stink?”

Having been around beagles for most of our lives, we’ve become more than a little used to the smell, and because we’ve been there and bought the beagle scented postcard, we’re going to run through the main reasons why your beagle has its own unique and highly individual scent.

All hounds smell and most of them have a very similar, and peculiar scent.

It’s a way of helping them to immediately identify the members of their pack, as everything that drives these hunting dogs is smell-related.

It also helps to mask their presence while they’re tracking their prey and whatever they’re on the trail of, as the odor, they emit smells nothing like any other canine.

And as your beagle belongs to the hound family, he’s been blessed with the same scent that all hounds have.

Think of the smell as being like a mild body odor, and no matter how many times your shower, shampoo, and bathe your beagle, or how pleasant he might smell immediately after he gets out of the bath, his own scent will still be there, lurking under the perfume of cleanliness.

You’ll never get rid of it, no matter how hard you try, so you might as well just accept it and in time, like every other beagle owner before you, you’ll almost certainly come to adore it.

The Smell Of The Wild 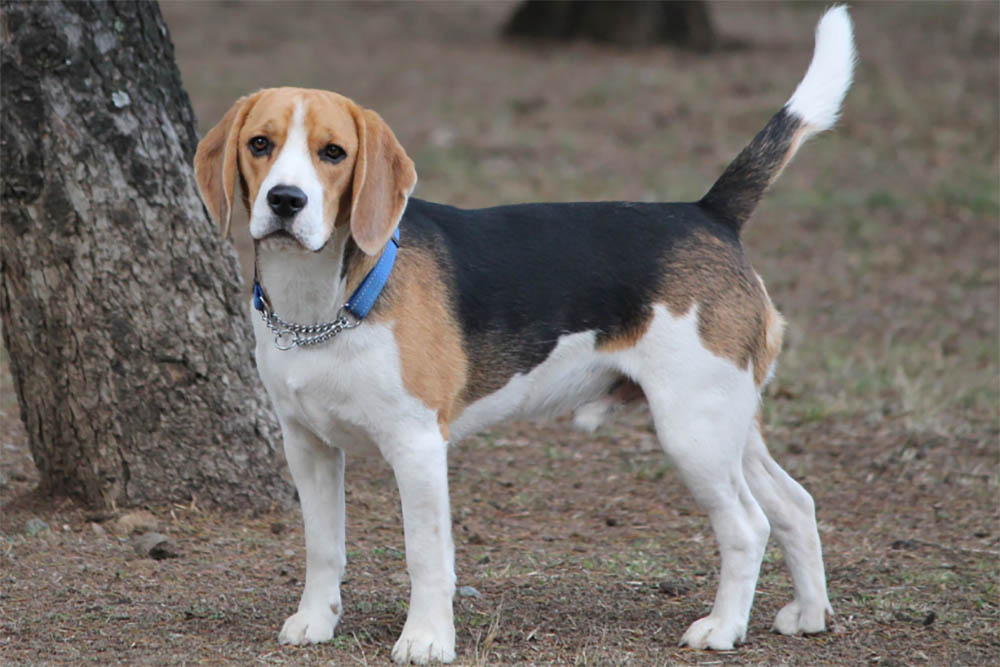 Keeping their fur clean and healthy isn’t easy for any dog, and the natural oils that their bodies produce to ensure that their coat remains in prime condition can start to become a stinky problem if your beagle, as all beagles like to do, enjoys boinging and jumping through the long grass while he’s on his walks.

Mud and accumulated dirt can get trapped in the oils that your boy’s skin secretes and after a while, that combination can start to smell pretty ripe.

When your beagle does start to smell like mulch and rotting vegetation, there’s only one way to deal with it, and depending on how you boy feels about being showered and bathed, he’ll either love the soapy cure, or he’ll hate it.  But regardless of how he feels about it, at least he won’t pong like the forest floor when he emerges from his bath.

One of the bad habits that a lot of puppies pick up when they’re young and not toilet trained, is rolling in their own pee. And some beagles, never grow out of this.

It isn’t usually a problem, as most don’t get the chance to do it while they’re out and about on their walks, but if your beagle is one of the dogs who hasn’t left the behavior behind them and sleeps in a crate at night, it can become an issue if they have an accident while they’re sleeping and revert to puppyhood.

All you can do, to stop them from smelling like pee, is give them a bath and thoroughly shampoo them after it happens.

It’s one of those weird smells that you grow totally accustomed to after owning one of those incredible dogs for while.

But then, he’ll gradually dry off and the smell will disappear. There’s nothing that you can do about it, it’s just Mother Nature doing her beagle thing again.

Even though they’re pretty hardy dogs, beagles do have an Achilles heel and that’s their long, floppy ears. And just like their not-so-distant cousins, the Basset hound, beagles are prone to ear infections.

Because it’s difficult to spot an ear infection in your boy, and they’re not always forthcoming about them when they do strike, the first time you’ll probably notice that your beagle has picked up an ear infection is when it begins to smell.

It’s a smell unlike any other, and all you’ll need to do to confirm your suspicion is to stroke your beagle’s ears. If he pulls away, it’s time to take him to the vet to get it treated, and if he doesn’t, it isn’t an ear infection and he probably just needs a bath.

link to What Types Of Dog Breeds Have Curly Tails?

Continue Reading
link to Can A Breeder Take A Dog Back?

The last thought that goes through anyone’s mind when they buy a puppy from a breeder is that they might have to, at some point, return the newest member of their family to its former home. And the...