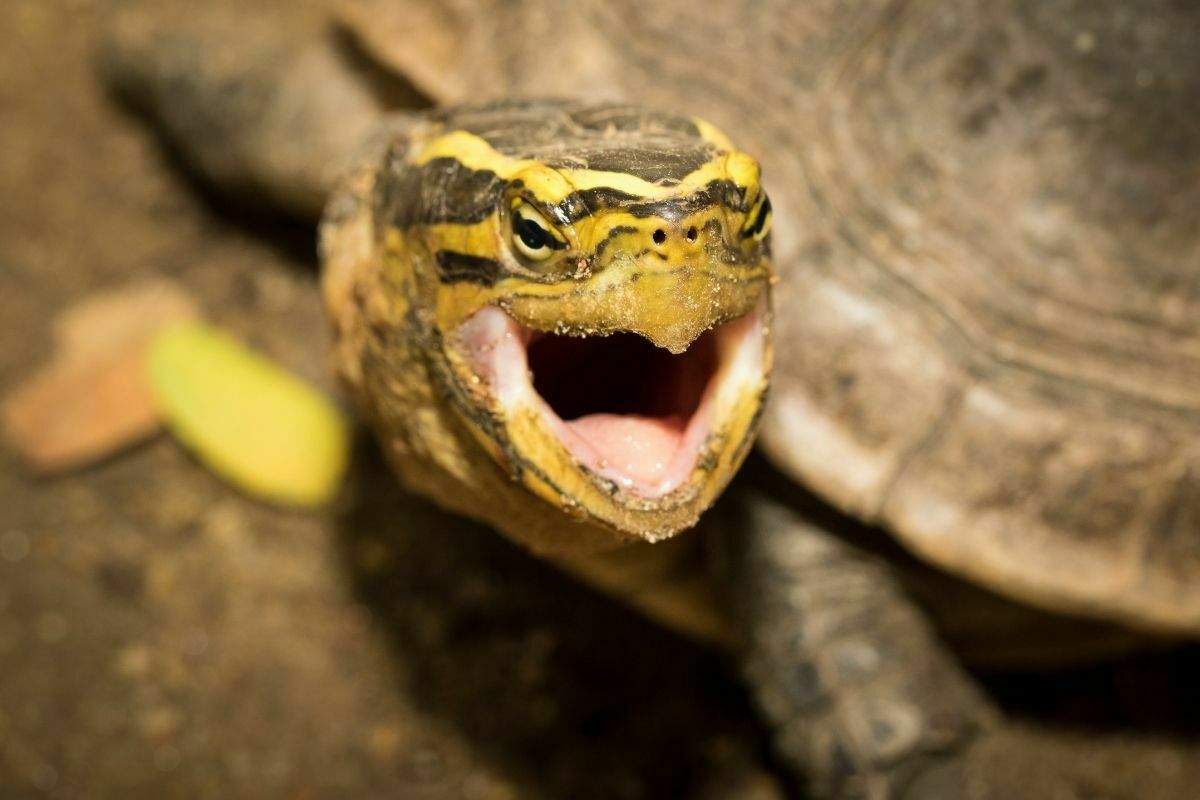 Analyzing and interpreting the sounds that animals make can allow us to work out what it is that they are attempting to communicate.

Turtles are not known for being particularly noisy animals, but they are known to show off certain sounds as a means of communicating.

In fact, hissing is one of the most popular sounds that animals will make as a means of interacting with each other. But, why exactly are turtles prone to hissing?

Here we are going to explore just that!

The Short Answer To The Question

Turtles will hiss if and when they are frightened. As well as hissing, they will also go back into their shell as a means of protecting themselves.

When they are hurrying back into their shell, their lungs will have to get rid of air especially quickly – this is so that there can be enough space for their head as well as their body within their shell.

This is what can make the hissing sound.

Other than when they are squashing themselves back into their shells in a hurried manner, it’s true that turtles do not hiss under normal living conditions.

How Do Turtles Actually Make A Hissing Sound?

Turtles are pretty interesting creatures, and they are unlike a lot of the animals out there.

Turtles carry a shell and they are also cold-blooded – and they are best recognized for their slow pace on land.

And, the biggest barrier that prevents turtles from hissing is the fact that they do not actually have vocal cords.

Although, this isn’t really a debilitating factor for turtles because they find other ways to make noise that can alert you of their presence.

Hissing can be a sound that turtles produce without really realizing – but it is most commonly heard when a turtle goes back into its shell, as the air shoots out of their lungs.

Fully getting into their shell is no mean feat – and turtles will have to quickly make space for their head and also their body which is why the hissing sound is made.

The hissing sound occurs because air is being pushed out of the shell with a great amount of force.

As we mentioned before, turtles will go back into their shells out of fear – if they have danger right in front of them, or if they are fearful of something near them.

For instance, if you happen to pick up a turtle hurriedly then you will be pretty much guaranteed to hear this sound.

Why Does The Hissing Sound Actually Happen?

We have established the reasons why turtles might hiss – but we have not actually come across the logic behind the hissing sound. 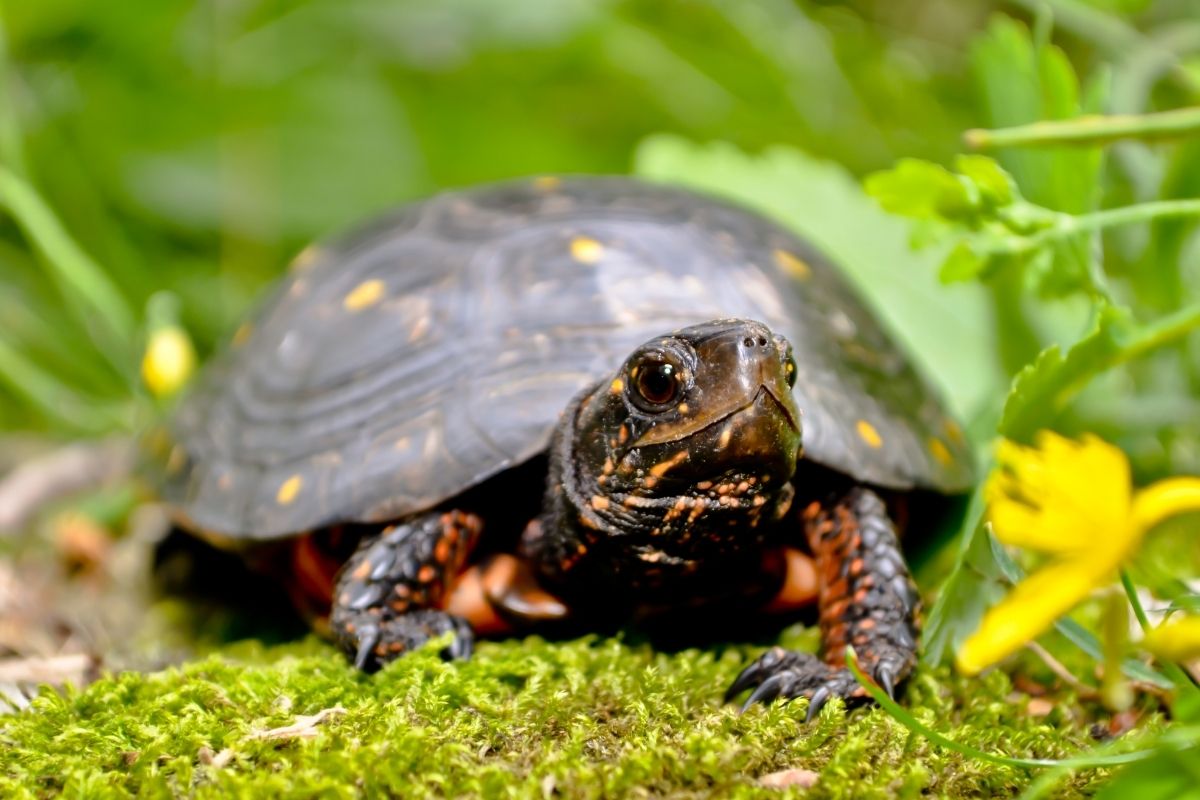 In order to acquire a much better understanding as to why the hissing sound happens, you can think about the lungs of a turtle as being like a balloon that is filled with air.

So, you might have heard of the painted turtle before, and this is because as far as turtles are concerned, they are one of the most popular.

This species of turtle are known for being particularly calm and friendly – but they can also be scared really easily.

Painted turtles are known for making hissing sounds when they go back into their shells especially quickly.

The painted turtle responds rapidly to danger, and this is how they make their hissing sound – again, this sound is made because of the way in which the lungs of the turtle expel in a moment of panic.

Can A Turtle Hiss Frequently? Why Would They Be Doing This?

If a turtle hisses pretty frequently, then this is a clear indication that they spend a lot of their time frightened.

Some turtles are much more relaxed than others, and for the turtles who get super stressed, hissing could be second nature to them.

Hissing is connected to behavioral traits that the turtle possesses – what we mean by this is that some turtles are not known for being angry or belittled, and these are the ones who will hiss a lot because they are going back into their shells pretty frequently.

As we stated before, the hissing sounds are a huge indication that a turtle is afraid – and if you have taken on a turtle as a new pet and notice that they hiss a lot, then it’s clear that they just have to get used to their new home.

Until the turtle has had sufficient time to adjust, it might continue to hiss pretty frequently, but this is not something that you should worry about.

When the turtle is used to their new home, they will be a lot calmer and they will not hiss so much.

Of course, you can help your turtle get used to its new environment – and you can do this through the art of deduction.

That’s right, you will undoubtedly be able to work out why exactly your turtle is hissing by working out what is unnerving it.

For example, if you find that the turtle hisses when you handle it – then this could be an indication that the turtle is fearful of you – so you will have to give it a lot more time to get used to you.

How Can You Encourage Your Turtle To Become Comfortable With Its Environment?

You can help your turtle get used to its environment by making its tank as comfortable as possible.

You can do this by making the tank fun – after all an empty tank would be especially dull and boring.

You can make a few different hiding spots for the turtle and this will be a key way to help them get comfortable with their tank. 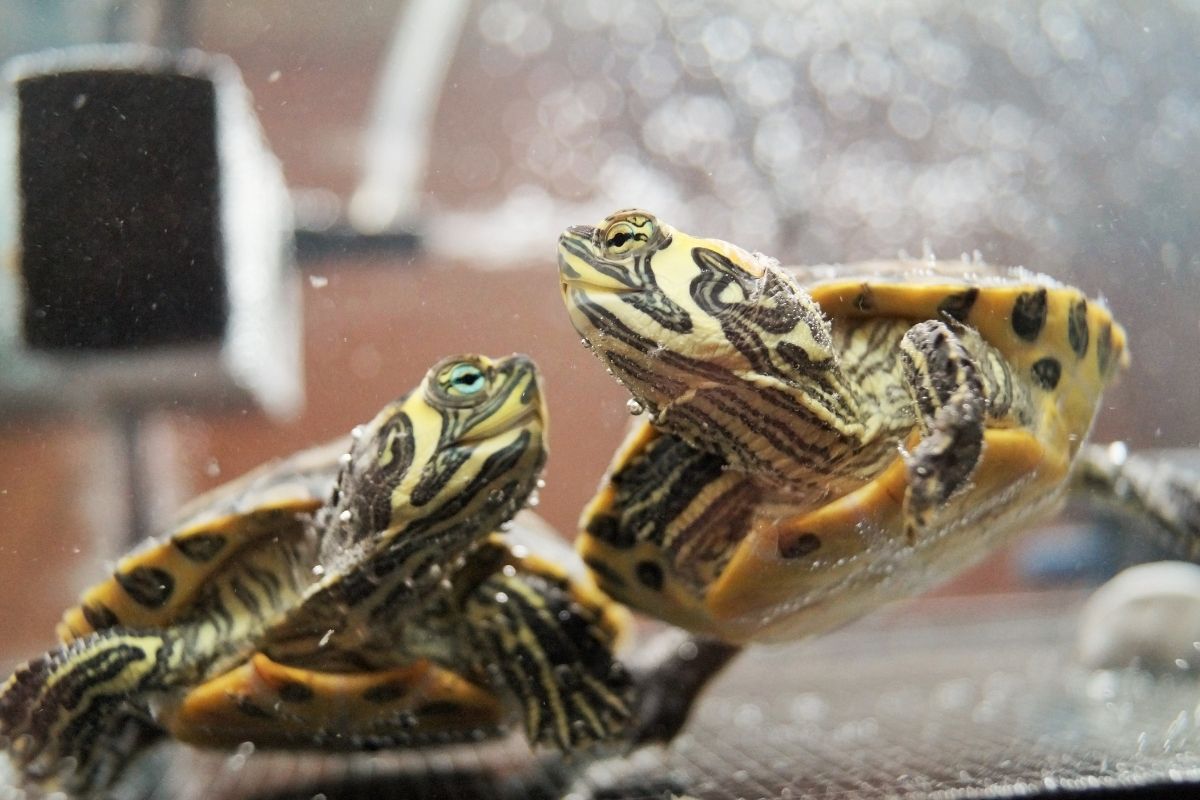 The turtle will try and find areas within the tank where it can feel safe and secure, and where it can go when it feels especially threatened.

When the turtle is a lot more comfortable with the tank and when it feels secure amongst its surroundings it will feel a lot calmer.

This will encourage the turtle to explore its tank and this will build its confidence in its surroundings.

When the turtle is comfortable in their surroundings, and once it realizes that you are not going to cause it any kind of harm, it will be a lot happier and a lot more comfortable.

What If A Turtle Hisses For A Prolonged Period Of Time?

If you notice that your turtle doesn’t seem to stop hissing, then this is something that you should really take note of, as this is especially uncommon.

Turtles do not tend to hiss unless they are going back into their shell.

The best thing that you can do in this situation is to keep an eye on the tank itself – if there is any kind of change within the tank then this might be spooking the turtle.

If you have decided to add anything new to the tank, such as a new entertaining hiding space or object for them to be amused by.

Or, you might have added a new pet friend to the space who they are not totally comfortable with right now. The best way to reassure the turtle is to remove whatever the new addition to the tank is.

However, this might not necessarily be what is making the turtle hiss.

If you have not added anything new to the tank, then the hissing could just be a key part of their personality which is slightly trickier to deal with.

Sometimes a turtle can hiss due to the kind of personality that they have – or they could even hiss depending on the mood that they find themselves to be in.

Overall, turtles will tend to hiss if they feel nervous or fearful of something near them.

A turtle hisses because of the speed at which they are getting its head and body back into its shell. The hissing is a bi-product of this motion.

If your turtle hisses a lot, then you need to rethink the tank situation.

What we mean by this is that there might be something in the tank that they are not a huge fan of – and the best thing to do is remove it.