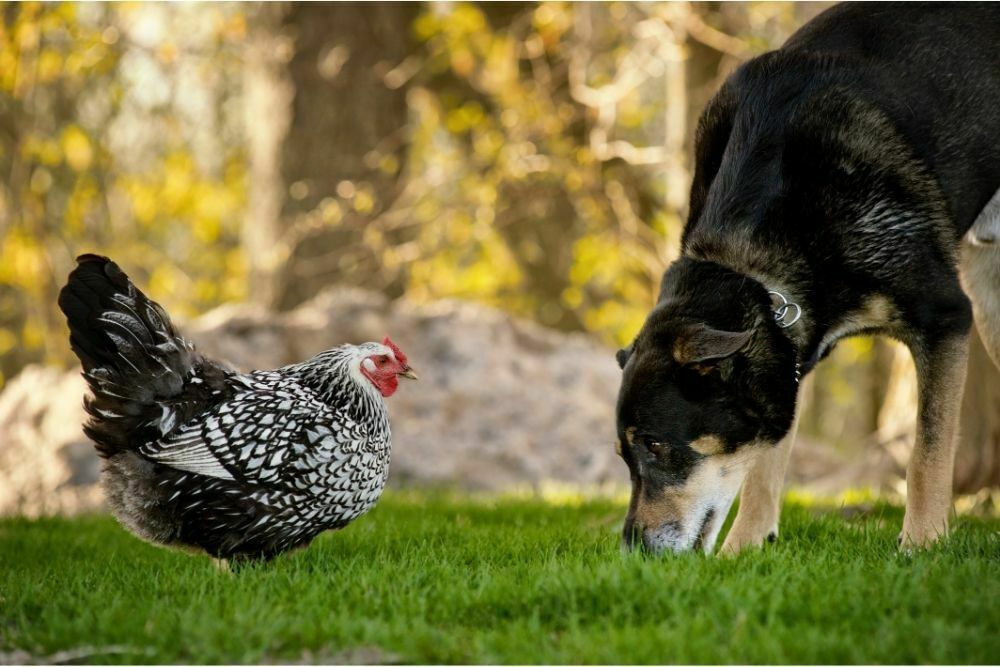 Keeping chickens has become more popular in recent years, with many people creating their own little coops in their backyards. We’re all about having livestock in our houses, but many of these people also have dogs. Chickens and dogs don’t always blend well together, with both posing a threat to one another.

One of the main problems is that people don’t realize the upkeep that chickens require. These animals are actually quite dirty, especially if you’re keeping more than a couple. In an ideal world, chickens should be cleaned out each day to stop the amount of poop from getting too much.

Cleaning your chickens out daily is especially important if you have a dog as chicken poop can pose a risk to your dog’s health. The more you clean out your chickens, the less likely it is that your dog will be able to consume any of their poop.

If you have both chickens and dogs or are considering bringing both into the family, there are some considerations and risk factors that you need to be aware of. Today we will be looking at these as well as how safe it is for your dog and chickens to coexist peacefully.

Any pet owner can relate to the panic you feel when you realize that your dog has eaten something that they shouldn’t have. Your pooch might be jaunting around like nothing has happened, while you’re frantically Googling what to do and if your dog is still safe.

We’ve all been there, and it’s not a nice feeling. So, let us put your mind at ease somewhat. Chicken poop alone is not toxic to dogs. Phew, you can now relax those shoulders and quietly laugh at the manic situation you had just talked your way into.

Rest assured that dogs will try and eat chicken poop – just like they try and eat everything else that they come into contact with – and the majority of the time it is fine.

However, chicken poop can contain harmful aspects that are toxic to dogs. Plus, your dog doesn’t even have to eat the chicken poop to feel the negative effects of these harmful components. Some can be airborne and therefore breathed in while your dog is near the poop.

You can un-tense those shoulders again, though, as the risk of your dog getting sick from chicken poop is low to moderate. As long as your chickens are healthy themselves and free of disease, your dog won’t get sick from their poop.

Just like with your dog eating anything, there will always be a risk associated with them consuming chicken poop. Below are some of the illnesses that your dog could experience if they’ve eaten chicken poop.

Just because they’re listed below, it’s important to remember that these are just possibilities. It is also possible that your dog is absolutely fine and had a lucky escape. However, you should always take your dogs to the vets for a check over to put your mind at ease.

The largest risk that comes with dogs eating chicken poop is contracting salmonella. Salmonella is a type of bacteria that can shed from the chicken and be passed through their poop. Even if your dog doesn’t get sick with the salmonella bacteria, they can then pass it to you or other humans in your household, getting you sick.

Chickens can pass worms onto your dog through their poop. Hookworms, tapeworms, and roundworms, as well as even more types of worms, are the most common and irritating to your dog. These worms are passed through poop, as well as the worm’s eggs.

Your dog can also get sick with giardia from eating chicken poop. The giardia parasite infects people who ingest things that are infected, so chicken poop is the ideal way to pass it. Dogs can also catch giardia when rolling around in poop or drinking infected water, which are both things that dogs can do in chicken coops.

Dogs who have eaten chicken poop also have a chance of getting ill from the parvovirus, although this is much less likely than the other illnesses we have looked at prior. Parvovirus is incredibly contagious and can be spread through all feces, not just chickens. Chickens can get parvovirus, meaning that if the chicken is sick and your dog is poop, they can also contract the disease.

As we mentioned before, it’s not a sure thing that your dog is going to get sick from eating chicken poop. As long as your chickens are all healthy and free of parasites, viruses, and harmful bacteria, then they shouldn’t pass anything onto your dog.

However, it can be difficult to know if your chickens are all completely healthy, which is why it is still important to prevent your dog from eating chicken poop as much as possible.

Coccidiosis can infect both dogs and birds, so it makes sense why you might be worried that your chickens would be able to infect your dog with this disease. However, coccidiosis is specific to each species, meaning that strains of the illness carried by birds cannot be passed onto dogs through their poop.

What to do if your dog eats chicken poop

First of all, don’t panic. Simply deter your dog from eating any more and discourage them in a bid to prevent them from doing it again. A few chicken poop pellets every now and then shouldn’t be harmful – it’s when they’re eating lots of chicken poop daily when you might be concerned.

Salmonella is the most common illness that your dog can get through chicken poop, so we’d advise you to look out for these symptoms first and foremost.

Dogs getting salmonella is actually quite rare, although they can still get an illness called salmonellosis. Symptoms include:

Worms are easier to spot as they will often show up in your dog’s poop. They are little white lines that will move around the poop, so a quick glance will often be enough to tell you whether your dog has worms or not. Other symptoms of worms include:

Giardia symptoms are mostly concerning your dog’s poop, so you’ll need to keep an eye on this. Giardia parasites attach themselves to the intestinal wall and damage it, causing foul-smelling diarrhea. The stool can range from soft to watery, with a green coloring that might also contain blood. Here are another few symptoms:

Finally, parvovirus is dangerous to your dogs. As both vomiting and diarrhea are symptoms of parvovirus, your dog can become dehydrated quickly which can damage the intestines and immune system, resulting in septic shock. Other symptoms include:

No one wants to see their dog in pain, so if you notice one symptom make sure that you remain diligent in looking for others. The better you observe your dog’s behavior and potential symptoms, the quicker you will be able to get them treated if there is something wrong.

Once you have noticed the symptoms, make sure that you get your dog checked right away by a vet. They’ll be able to prescribe the correct treatment to get your dog as right as rain once more. Worms, salmonella, and giardia can often be treated with antibiotics and monitoring. Parvovirus; however, might require hospitalization.

Okay, so the symptoms of the possible illnesses that your dog can get from eating chicken poop are very worrying. No matter how many times we say that it’s only a low to moderate risk of your dog getting sick, you’ll still want to prevent it as much as possible.

Some dog owners use negative reinforcement to stop their dogs from eating chicken poop. Every morning, all you need to do is go outside before your dog is allowed to and sprinkle some hot spices over the chicken poop.

Cayenne pepper or chili powder is good for this. You don’t want to add too much – just enough to leave a bad taste on your dog’s tongue. You’d think the chicken poop had already done that!

After a few days of your dog trying to eat chicken poop with your special ingredients added to it, they should get the hint and stay away. This will give you more leeway for when you need to clean the chicken coop out.

Perhaps the best way to stop your dog from eating chicken poop is to take away the chicken poop! Keep the coop clean and free of poop as much as possible. If your dog only goes out into the yard a couple of times a day, make sure that you go out first to ensure that there is no poop that your dog can get to.

A clean coop will not only stop your dog from getting to the poop, but it might also prevent your chickens from getting sick in the first place. Everyone wins!

Rumor has it that chickens love pineapple and dogs hate it. So, it might be worth a try to feed your chicken pineapple so that your dog will stay away from its poop. Chickens shouldn’t be fed too much pineapple, so it’s best to only do this for a week or so to ensure that your dog gets the hint. After they stop showing interest in the poop, stop feeding pineapple to your chickens.

If you don’t have the time to clean your chicken coop multiple times a day, make sure that your dog stays away from the poop in another way. Keep your chickens securely in their coop that your dog cannot get into.

Dogs are allowed into the world more thanks to their walks, meaning that they are exposed to more diseases and illnesses than chickens are. So, if a chicken was to eat dog poop it would be more likely that they would get ill.

With that being said, it’s also much more likely that a dog would eat chicken poop rather than chickens eating dog poop. While the latter is not impossible, we think that the risk would be much lower.

Whilst chicken poop can be bad for dogs, the risk of them catching any illnesses is low to moderate. However, this doesn’t mean that you should allow your dogs to eat chicken poop whenever they want to.

Salmonella and worms are among the most common illnesses that your dog can contract from eating chicken poop. Giardia and parvovirus are also possible, although the latter is less common. Each of these illnesses offers some pretty unfortunate symptoms too.

Prevent dogs from eating chicken poop with negative reinforcement or keeping your dogs and chickens separate. While the risk is low, you can never be too careful!