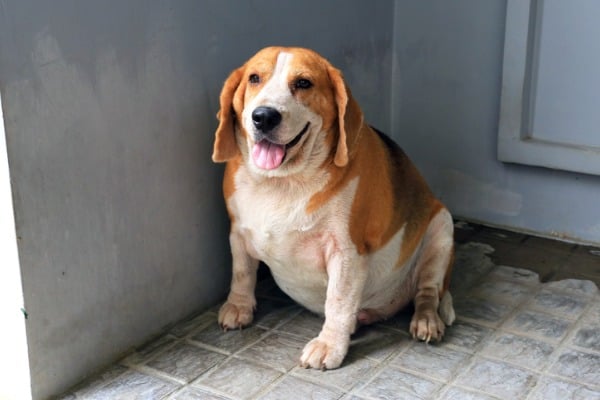 Contents hide
1 Digestive System of a Dog: What You Should Know
2 Is Your Dog Drinking Too Much Water? And Why?
3 Puppies with Big Bellies: What Is Normal and What Are the Causes?
4 Is Your Dog’s Stomach Distended and Hard?
5 Other Symptoms to Look Out For
6 My Recommendations

There you are, cuddling or hugging your dog, or just watching them stroll about the house or along your walk, when you notice something isn’t quite right on their underside.

You see that your furry friend’s belly has been inflated, like a balloon. And no, it’s not a pregnancy!

Fido doesn’t seem to mind but it’s clear that your dog’s stomach is swollen despite them not showing any signs of pain.

You’re instantly worried, as you should be. You know it could be nothing but you also don’t want to ignore it, especially once you feel the belly and it’s so firm you can’t even push it in. It’s like they swallowed some mixing cement that expanded and hardened up in there!

Don’t worry, I’ve got some info for you below as we go over this commonly occurring medical problem in dogs: abdominal distention and stomach swelling.

Digestive System of a Dog: What You Should Know

Before indulging in the topic of our concern, let us first have a look at the basic anatomical details and structural hierarchy of the digestive system of a dog.

This will help you narrow down possible causes so you know what to do next.

Their food processing equipment is somewhat similar to what we have in our bodies.

The digestive system of a dog includes:

The stomach, which plays a role in the storage of food also aids in digestion. Of course, right?

Specifically, it secretes an acidic substance called gastric juice that helps in making the food softer to pass down in the small intestine and also activates stomach enzymes to digest the proteins present in the food.

Is Your Dog Drinking Too Much Water? And Why?

So, you might be thinking that maybe your dog is drinking lots of water, and that made his stomach swollen.

Believe it or not, such a simple explanation is many times the reason for a hard and swollen looking belly.

Why would they be drinking so much?

The simple reason that your dog is drinking lots of water is excessive thirst.

It might be because of the hot weather, or your dog lost a great amount of body water in excessive sweating or panting.

In many cases this is normal. Basically, when your dog is thirsty (or hungry), they don’t know when to stop in a given session of lapping down what is solving their problem in the moment.

But let’s look further, because excessive drinking can go beyond just needing to replenish. I hear you already if you’re saying, “my dog hasn’t been in the heat or panting a lot”.

If she is drinking above this, she might be suffering from polydipsia.

In other words, excess water drinking may be a sign of an underlying disease.

The following are some common medical conditions associated with excessive thirst and increased water drinking:

The best way to identify whether your dog is suffering from polydipsia or not is to look at the following symptoms associated with polydipsia:

Drinking excess water due to any cause can make your dog’s stomach swollen and distended.

It is because water gets stored within the stomach and goes down to the intestines at a slow pace.

Remember our digestive lesson from above?

Although it might look like a painful condition to you, your dog usually wouldn’t be in pain because it is just mechanical bloating of the stomach and not an associated inflammatory condition.

Still though, it’s best to consult a vet and share any related symptoms with them.

Additionally, as a medical professional, I’ll want to check a dog that has had a swollen belly for more than three days or if it’s happening regularly for more than a couple of weeks.

Puppies with Big Bellies: What Is Normal and What Are the Causes?

We’ve been talking about adult dogs so far. Puppies, too can get big and bloated bellies. Anyone who has had puppies has no doubt witnessed this first hand!

It isn’t just that puppies look extremely cute in bloated tummies. Bloating actually can be serious and sometimes fatal.

It is, in fact, a leading cause of death among large and giant-breed puppies.

Here’s what you need to know about bloating in puppies.

Puppies are usually a bit round, especially in their very early stages of development.

The reason behind it is the fitting of several internal organs inside a small package and things aren’t in the right place yet compared to a healthy adult dog.

Their tummies even get round with moderate eating because of the small stomach space.

These guys just need time to “grow” their bellies to accommodate their bodies and systems.

So, if your puppy’s tummy gets big the moment he eats, don’t panic as it is quite normal.

However, you must keep in mind that you should feed your puppy several small meals frequently instead of only one or two larger meals.

Let us now take a look at the causes of a bloated belly in your puppy that you don’t want to mess around with.

You got a puppy that is too young to be kept as a pet and the puppy was unable to digest the puppy kibble.

This is the perfect breeding ground for roundworms.

In fact, the majority of puppy stomach swelling and bloating occurs because of the roundworms inside the belly.

There could be a congenital defect of the stomach which is hindering the passage of food from the esophagus to the abnormal stomach.

Diarrhea and vomiting can occur more frequently in this cases.

Either way, it’s time for the vet to take a check and see what’s going on.

Is Your Dog’s Stomach Distended and Hard? 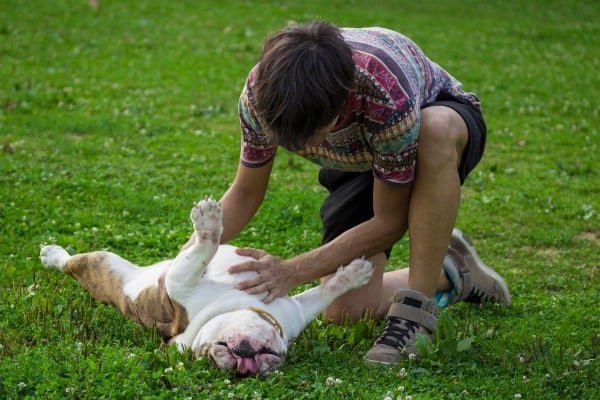 If you’ve been observing your dog’s underside for a while, and can rule out extra eating or drinking as a cause, we need to look seriously at some other medical reasons.

Following are the common etiologies of the distended and hard stomach of your dog:

It is notoriously known as the “mother of all emergencies” because untreated gastric volvulus can be extremely fatal to a dog within few hours.

GDV happens when the distended stomach (due to gas or food stretch) rotates such that the stomach’s blood supply is interrupted.

The inflammation of the peritoneal layer (a cellular layer that covers many gastrointestinal organs) is called peritonitis.

Peritonitis of the stomach peritoneum can result in stomach inflammation and swelling.

This is because inflammation spreads from the peritoneum to the stomach walls making the stomach reddish and inflamed.

Fluid can abnormally accumulate in your dog’s stomach due to an underlying intestinal disease, liver failure, tumor, or other related disorders.

Such a state in which fluid accumulates within any part of the abdominal cavity is known as ascites.

This can result in a swollen stomach.

Other Symptoms to Look Out For 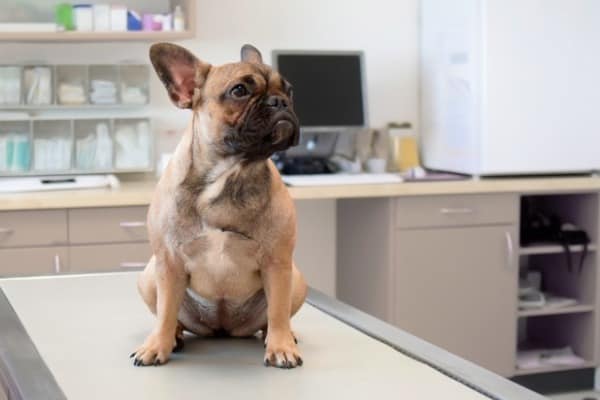 We’ve almost provided the necessary details regarding the causes of stomach bloating and swelling in a puppy/dog.

Although the above-mentioned symptoms are diagnostic of a swollen stomach, there can be other symptoms that can be looked for such as:

A round distended abdomen doesn’t necessarily mean an underlying problem.

It can be just due to the excess fat accumulation within the abdomen.

Change in eating behaviors are sometimes related to stomach swelling.

For example, your dog might be drinking or eating too fast and frequently making the abdomen look bloated.

Another possible reason can be that your dog starts liking food outside the house and has easy access to it.

So, he eats from there as well along with your feed, making him overweight.

Other symptoms like pale gums or if your dog is vomiting there may be an obstruction in the lower intestines causing bloating. A clear sign of this is if the vomit smells poopy. Gross… but helpful info!

You all know that dogs pant! Whenever your dog runs fast or does a tiresome task, he might start panting heavily.

In such a case, the lungs get filled with the inhaled gas excessively which pushes the underlying abdominal organs aside. Thus, the abdomen looks distended.

It could be a life-threatening emergency for your dog if his stomach is swollen, or it can be as simple as due to overeating/overdrinking.

Thus, you must never try to diagnose the underlying problem by yourself and consult a vet. Even if your dog isn’t showing signs of pain, take the signs their stomach is telling you!