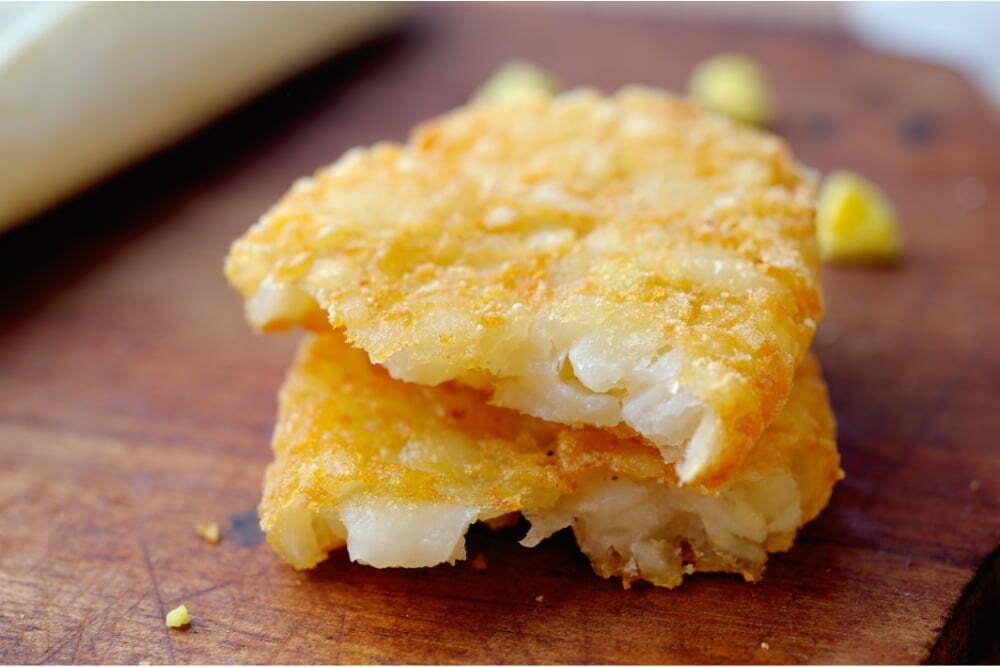 For a dog, there’s nothing quite like having a tasty snack every once in a while. As owners, there’s something quite satisfying in seeing your dog gobble up their favorite treats, especially if they’re from our own meals!

It can often be hard to resist those adorable little pleading eyes when they’re begging you to share your delicious food with you.

With that being said, however, many human foods aren’t good for dogs to eat. Unsurprisingly, hash browns are just one of these kinds of foods.

It’s very tempting to give your dog one of your hash browns. Don’t worry if you’ve fed your dog a hash brown before, since it probably won’t cause a huge problem.

In some situations though, hash browns can cause major problems for dogs.

Today, we’re going to dive into why hash browns – and potatoes in general – are not a great choice for your dog’s diet.

Can your dog eat a hash brown? Well, the short answer is that they shouldn’t. It’s a very bad idea for dogs to eat hash brown potatoes.

McDonald’s hash browns are especially bad for your dogs, since they are full of bad ingredients like salts, preservatives and fats.

They’re frenched in oils too, so the calorie count is astronomical. Some of them also contain onions, which are poisonous for your dog.

Will It Be Bad If My Dog Eats a Hash Brown?

There are many reasons why giving your dog hash browns is a bad idea. They’re cooked in a way that’s bad for your dog, and the ingredients and seasonings aren’t great for your pooch either.

That’s without even mentioning the calories! We’re going to break down each section to show you exactly why your dog should not be eating hash browns.

What’s Wrong With the Ingredients?

Hash brown recipes are generally quite similar in many respects. They will contain riced or shredded potatoes.

They are then fried along with onions, and occasionally are bound using oil and eggs. Finally, seasoning is added to the hash brown.

With that in mind, it’s a good idea not to allow the potato to hit the floor where your dog can tuck into it.

Potatoes contain something that’s very toxic for certain dogs – solanine. Your dog probably won’t become ill from eating potatoes unless they eat large amounts, so try not to panic if your dog accidentally eats some potato.

Onion on the other hand is an entirely different story. Onion is poisonous, and it’s almost always present in hash browns. Your dog can even get sodium poisoning from the high salt content.

What’s Wrong With the Cooking Method?

The other thing that makes hash browns bad for dogs is the way that they’re cooked.

This food which is super tasty for humans is fried in vast amounts of vegetable oil. This kind of oil is very bad for your dog.

Your dog should not eat bacon fat, butter, grease or vegetable oil. They can cause big problems for your dog’s health, and they could even develop issues like obesity or pancreatitis.

The summary is that the oil is very bad for your dog, and contains the worst types of fat – saturated and trans fat.

The Calorie and Carb Issues

Here’s the obvious problem: the calories. Hash browns contain a huge amount of carbohydrates, which are fine in moderation for your dog since they give them energy.

They are not good for your dog if they are eaten in large amounts. Eating large amounts of carbohydrates can even result in diabetes and obesity for some dogs.

Your dog doesn’t really need extra carbs since they will get all that they need from their dog food. Sure, your dog could eat a hash brown, but there really isn’t any need for them to eat them.

Let’s just remember that dogs should only be eating roughly 25 calories for each pound of body weight daily.

In addition to this, the dog should ideally be having only 10% of their daily calories as snacks. The other 90% should be their dog food.

With that in mind, a medium sized dog such as a French bulldog shouldn’t be eating much more than around 625 calories a day.

A 70 pound labrador shouldn’t eat more than roughly 1750 calories each day. This will vary depending on the dog in question.

So, with the calories and ingredients in mind, let’s answer the question. Should your dog really be eating McDonald’s hash browns?

You don’t need to panic if your dog does eat a hash brown. They are unlikely to make your dog very sick. However, the hash brown could possibly give your dog some issues with their tummy in the short term.

There are some ingredients in McDonald’s hash browns that are terrible for your dog. For instance, the oils, sodium and salt are very bad for your pet. Your dog should not be eating lots of oil – it’s not good for them!

The calories are the biggest problem, though. Hash browns are usually around 136 calories. If you have a 25 pound French bulldog,that’s 22% of his daily calorie intake. For a 70 pound labrador, that’s 8%.

That may not seem too bad for the labrador, but it’s certainly a huge amount for the medium sized French bulldog.

Unfortunately, however, the hash browns will still contain a huge amount of fats, salts and preservatives. None of these things are particularly good for your dog’s diet.

In terms of calories, you’re looking at around 326 calories for 100g of frozen hash browns, which is around 52% of a French bulldog’s daily calorie intake.

Other brands may not be this high in calories, but it’s better not to give your dog hash browns at all if you can avoid it.

What About Subway Hash Browns?

This will hardly come as a shock to you, but your dog should also stay away from Subway hash browns.

These hash browns contain a high amount of saturated fat, salt and they’re also super high in calories. They usually contain around 210 calories, a whopping 34% of a French bulldog’s daily calorie intake!

Knowing When to Call A Vet 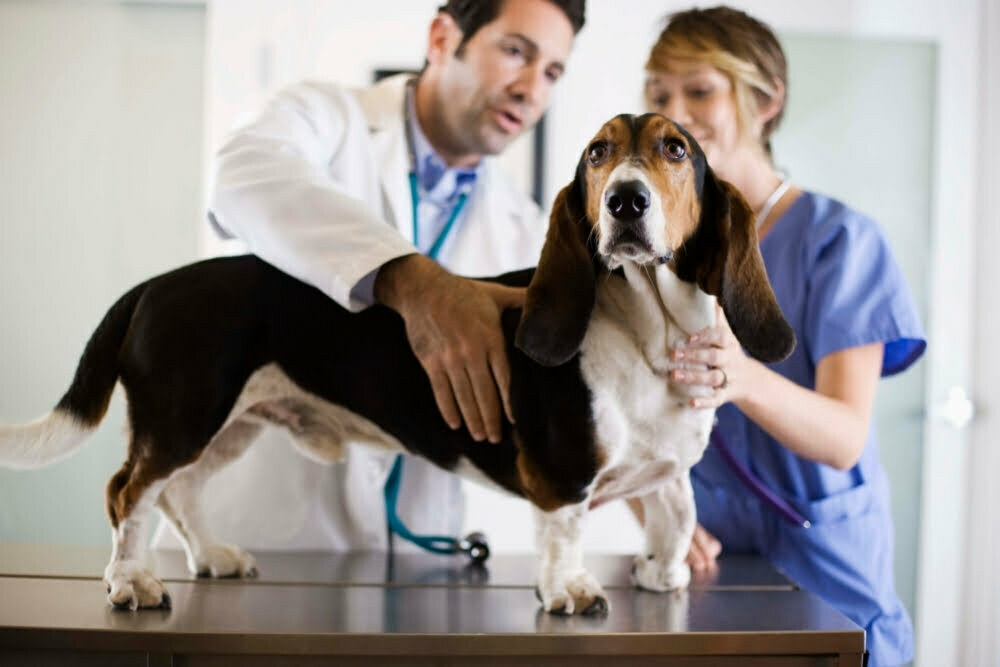 Thankfully, most dogs are completely fine when they eat some hash brown. The vast majority of dogs will have no side effects whatsoever. With that being said, you should always monitor your dog after they have eaten hash browns.

Keep an eye out for any behavioral changes – if you notice any, then you should certainly call your veterinarian. There are circumstances where your dog could have a severe reaction to hash browns.

Look out for the signs of onion, sodium or food poisoning. These include:

When it comes to feeding your pet, it’s best to have all of the information possible. If you have any doubts about what your dog should eat, you should look online for more information.

For a more comprehensive answer, your veterinary surgeon should be your first point of reference. Your vet can give you a good indication about the sorts of things that your unique dog should be eating every day.

In fact, it’s a very bad idea to allow your dog to eat hash browns. It’s alright to give your dog the odd treat if you want to, but it should be avoided.

Try to stay away from giving your dog lots of frozen hash browns or McDonald’s hash browns. If your dog has too many of them, there’s a strong chance that they may experience some negative side effects.

The calorie content isn’t great either. Just think – giving your dog just a few hash browns could take up a significant portion of your dog’s daily calorie allowance!

It’s better to follow the 90/10 rule when feeding your dog, and give your dog a small amount of treats each day.

What about if you’re on the road and have no food for your dog? There may be situations where you need to stop to get something for you and your dog to eat. Again, it’s best to avoid hash browns if possible.

You should look for another kind of food from the fast food restaurant in question. Beef patties from McDonald’s are usually a decent choice.

Of course, these shouldn’t be given to your dog on a daily basis either, but they’re a decent choice if you have very few other options.

It’s always best to do some research if you have any doubts. Knowledge is power, and power means that you will have a very happy and healthy pooch!