Taking an hour out of your day, to let the world pass you by while enjoying some fresh Nigiri, Sashimi or a California Roll is one of life’s little pleasures.

It’s a joy that every Sushi fan knows all too well, but if you’ve got your faithful four-legged hound with you when you start to savor the multitude of flavors that wash over your Sushi loving palette, the chances are that he’ll be staring up at, wishing that he could enjoy them all as well. 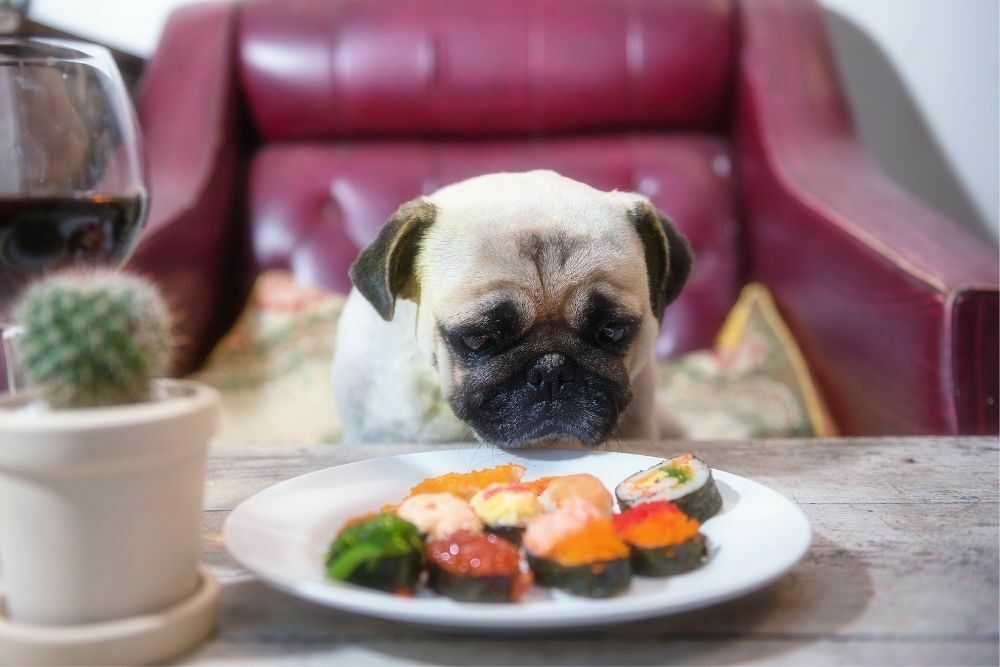 Being the obliging pup parent that you are, and as you share almost everything else that you eat with your best pal, you’ll probably be tempted to split your Sushi plate with him too.

But before you do, you need to ask yourself one, fundamental question – Can my dog eat Sushi? Is it safe for him to tuck into this savory snack?

If we’re honest, whenever we eat fish, we usually expect to see our cat appear out of nowhere as she attempts to sneak up on us and steal an Alaska Roll.

It’s a cultural idea that’s deeply ingrained in our collective psyche, cats like fish, and dogs prefer meat. That’s probably why the thought that a dog might enjoy Sushi doesn’t even cross most people’s minds, and they’ll just react instinctively and offer their pup a little taste of whatever they’re eating.

And most of the time, that’s absolutely fine, but with Sushi, things can get a little blurry, and it isn’t quite as clear cut as “my dog eats fish all the time, so he’ll be fine with a couple of mouthfuls of Nigiri”

If it was just about the raw fish, then there wouldn’t be a problem as dogs are more than capable of, and able to eat more than their fair share of fish whenever the mood takes them.

However, it isn’t the fish in Sushi that might be a problem for your dog, as there’s far more to this Japanese delicacy than salmon and tuna. As Guy Fieri said, the word Sushi doesn’t mean raw fish, it refers to the rice that’s used to make Sushi.

Let’s clear one thing up straight away, Sushi isn’t about fish, it’s about the rice that the fish is wrapped in and served with.

The rice is the all-important ingredient in Sushi (which, when literally translated from Japanese, means “sour-tasting”), which is why different types of the dish feature such a wide variety of ingredients that include everything from cucumber to crab, avocado to shrimp and octopus, carrot and shrimp.

In fact, Sushi isn’t even Japanese and only became synonymous with the country because rice was and is a staple part of the national diet, and fishing is the largest rural industry on the island.

Historically, Sushi actually comes from China and is widely thought to have originated among the villages of the Mekong river before spreading throughout Asia thanks to the proliferation and rise of trade throughout the middle ages.

And as soon as US service personnel developed a taste for it during the nineteen fifties, it was only a matter of time until Sushi found a new home in America.

It might have come from China and Japan, but Sushi is now as American as french fries and apple pie. This is probably why most of us have, on occasion, been known to share a roll or two with our dogs. 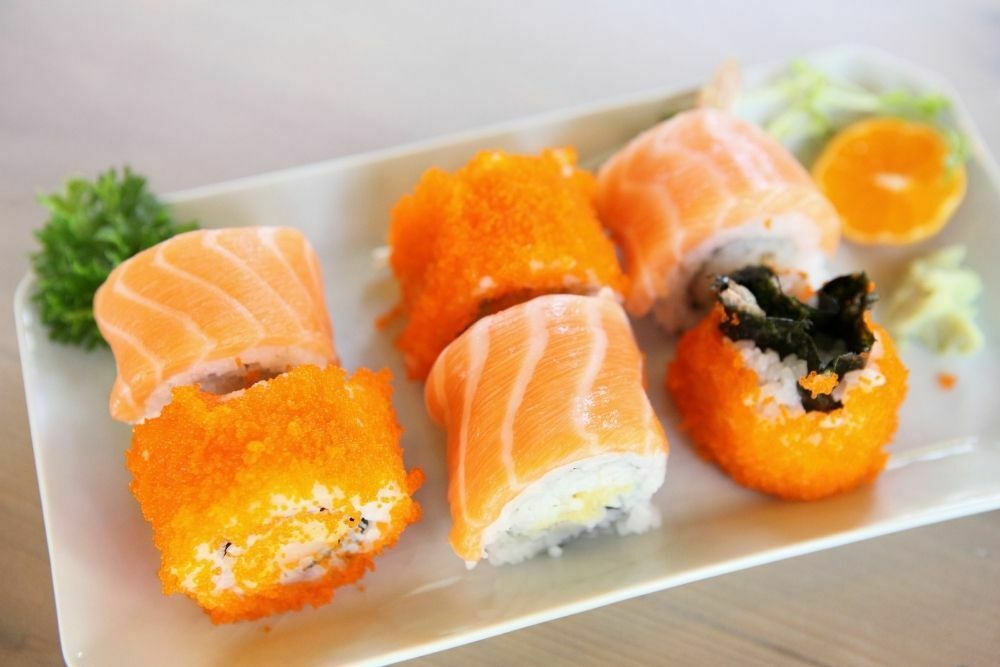 As you probably know, rice and a dog’s appetite go together like peaches and cream. When your hound is ill or having tummy troubles, the first thing that any vet will recommend that they should eat is chicken and rice.

And as rice is a primary ingredient in far too many varieties of dog food to actually listen here, it’s pretty much a certainty that rice, just like raw fish, isn’t the problematic ingredient in Sushi for dogs.

What is the big Sushi canine no-no, then? Well, there are actually two of them. The lesser evil of which is Tempura, which can be an issue for dogs, as it’s nearly always fried, and as much as they like almost anything that’s been coated in batter and dropped in boiling oil, dogs and fried foods don’t get on well.

They can cause many stomach problems, and the high fat and oil content isn’t healthy for your hound.

The big bad in Sushi, at least as far as dogs are concerned, is avocado. While we think of it as being a tasty, healthy, and nutritious treat, the humble avocado is notoriously problematic for dogs, because it contains persin. What is persin?

We’re glad you asked, as persin is a toxic fungicide that has little or no effect on humans but can create all sorts of dietary distress and upset in a dog, and if they overeat of it, persin can even lead to respiratory and cardiac failure in canines.

While we’re on the subject of Sushi, it’s probably wise to clear up a few persistent myths that continue to hound (see what we did there?

Well, we thought it was clever, even if no one else does) this rice-based delicacy. Your dog is no more likely to become infected with infected parasites or suffer the catastrophic effects of mercury poisoning than you are if either of you eats Sushi.

Both are Western delusions that have been perpetuated for decades by an undercurrent of anti-Japanese sentiment that is blatantly untrue.

The only time that you or your dog (providing it doesn’t include any avocado) are likely to get sick if you eat Sushi is if you ignore the eat-by dates on the packaging, which given how careful the majority of us are to follow them to the letter, is incredibly unlikely ever to happen.

Can dogs eat Sushi? Yes, they absolutely can if it doesn’t contain avocado and doesn’t become a major part of their everyday diet. Remember, a little of what your dog fancies can be good for him. And as long as you adhere to that rule, sharing your Nigiri with your pup is absolutely fine.